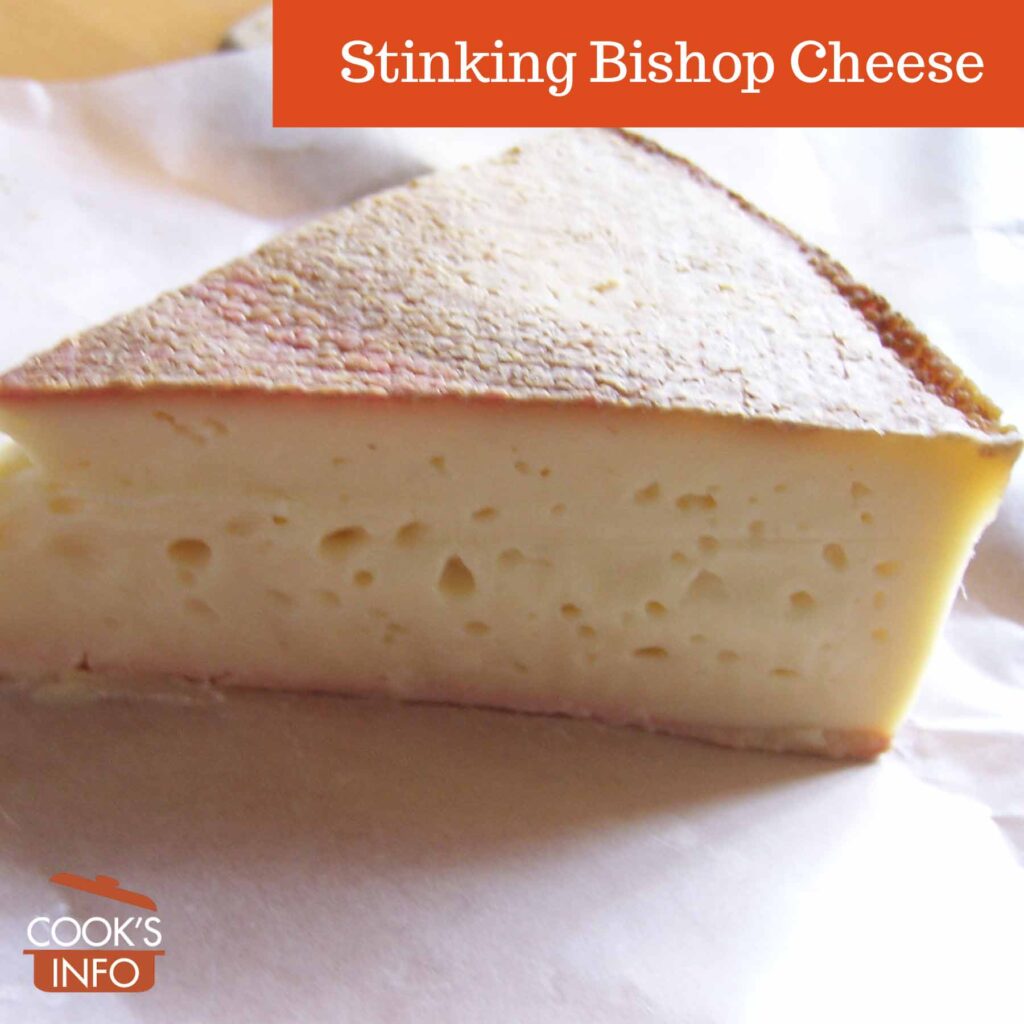 Stinking Bishop Cheese wears its name proudly. It smells like old socks. The smell is so pronounced that if you buy some at one store and carry the bag into another or onto a bus, people around you will notice.

In the spring of 2009, the cheese had the dubious honour of being crowned the United Kingdom’s stinkiest cheese. [1]The 2009 honour was awarded in the Dairy Produce Awards contest held at The Royal Bath and West Show in Shepton Mallet, Somerset.

Most of the smell is in orangish-yellow, sticky rind. The flavour of the actual cheese is much milder, with a tang almost like a mild vinegar.

The cheese inside the rind is soft and creamy.

Stinking Bishop Cheese is made by Charles Martell and Son company in Dymock, Gloucestershire, England.

Stinking Bishop Cheese is made from pasteurized cow’s milk curdled with a vegetarian rennet. Before being put into moulds, the curds are washed with perry (pear cider) made from Stinking Bishop Pears (thus its name), which grow on the Gloucestershire-Herefordshire border. In order to allow a bit more bacterial activity, the cheese is not salted until after it is removed from the mould.

Once turned out of its mould, the cheese is aged from 6 to 8 weeks. During this time, the rind is washed with more perry.

The cheeses are made in a large size, as well as a smaller one.

Though attributed to old recipes from monasteries, the cheese actually started being made sometime in the 1980s/1990s by a man named Charles Martell. Martell was both a pear and a Gloucestershire cow enthusiast.  The Stinking Bishop Cheese brought together his two interests. Before making Stinking Bishop, he made Single Gloucester, which he helped obtain its PDO status in 1997.

This web site generates income from affiliated links and ads at no cost to you to fund continued research · Information on this site is Copyright © 2022· Feel free to cite correctly, but copying whole pages for your website is content theft and will be DCMA'd.
Tagged With: British Cheeses, Gloucestershire Food