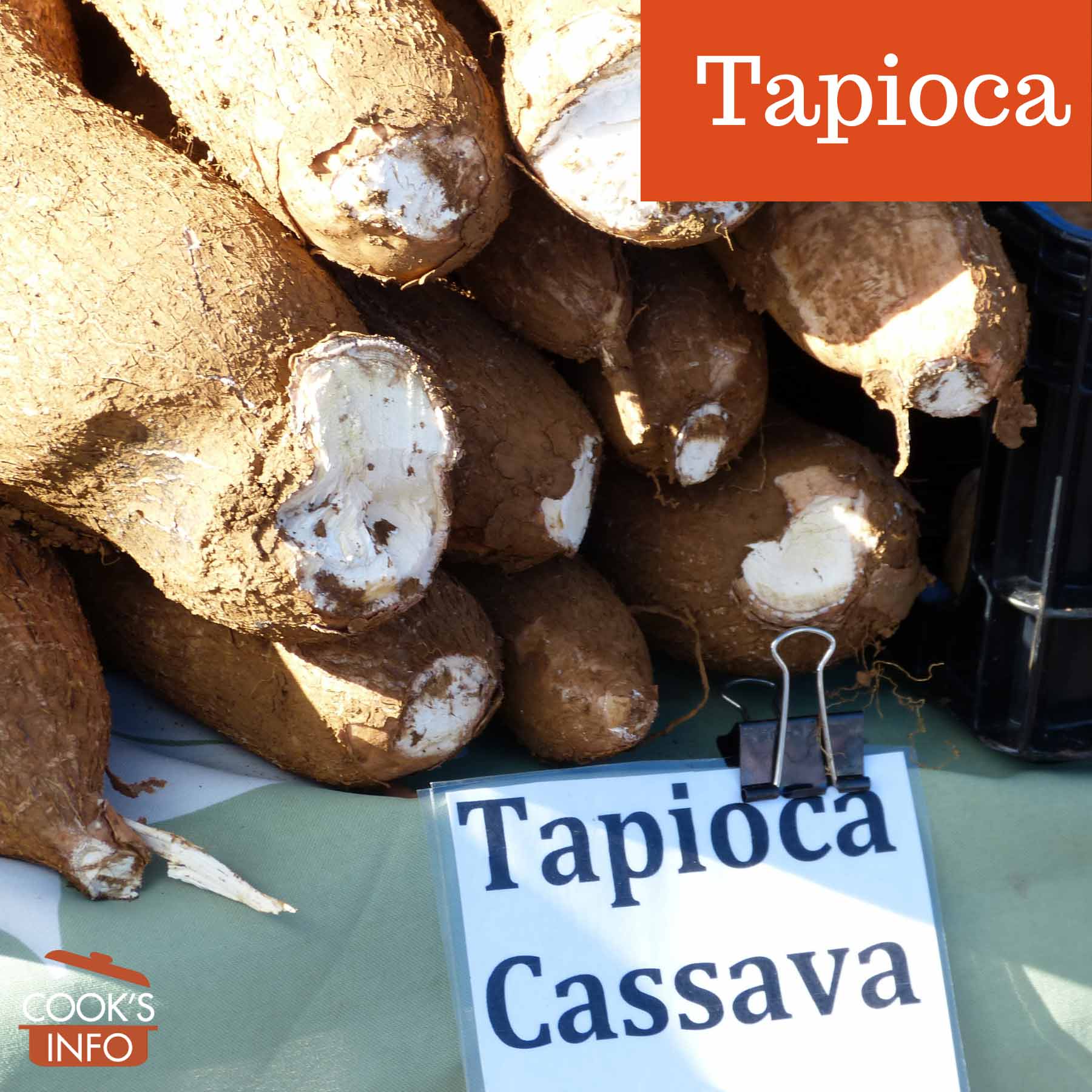 Tapioca is a starch.

It comes from a tropical plant root called “cassava“, which grows in Africa and South America. The starchy root is roasted, and ground.

Tapioca has little taste on its own, and is used instead for its thickening abilities.

Tapioca can be purchased in the following forms:

In a liquid, tapioca reaches its maximum thickening power at 85 C (185 F).

Freezing does not affect tapioca, so it is a good thickener to use in foods that will be frozen.

Use where you want a high gloss, such as in fruit pies. It can look odd in a gravy.

Genuine tapioca disappeared from American grocery store shelves during World War Two, and was replaced by a sorghum-based product:

“Tapioca, an early casualty of the Japanese war, returns to the grocers’ shelves as an all-American product. It appears in the form of a boxed Minute Dessert made by the General Foods Corporation from an American grain, sorghum, this to replace Minute Tapioca which disappeared from the stores over two years ago.

Previously Java was our principal source of supply of tapioca starch taken from the root of the cassava. The new dessert is made from a sorghum starch but produces a pudding almost identical to the prewar kind. This new tapioca turns out thick and creamy, really delicious, and can be used in numerous pudding variations and as a thickening agent for pies. But don’t try using it to thicken a soufflé, or as a binder for meat loaf. Sorghum starch has certain differences from the starch of cassava and these differences must be considered in its cooking treatment. The home economists of the General Foods Corporation have worked out new recipes using the dessert, to replace the classic favorites which starred Minute Tapioca. A recipe folder accompanies each box and for happy results observe the rules to the letter.” — Paddleford, Clementine (1898 – 1967). Food Flashes Column. Gourmet Magazine. October 1945.

The name ‘tapioca’ comes directly from the word used by indigenous people in Brazil.

This web site generates income from affiliated links and ads at no cost to you to fund continued research · Information on this site is Copyright © 2022· Feel free to cite correctly, but copying whole pages for your website is content theft and will be DCMA'd.
Tagged With: Tapioca