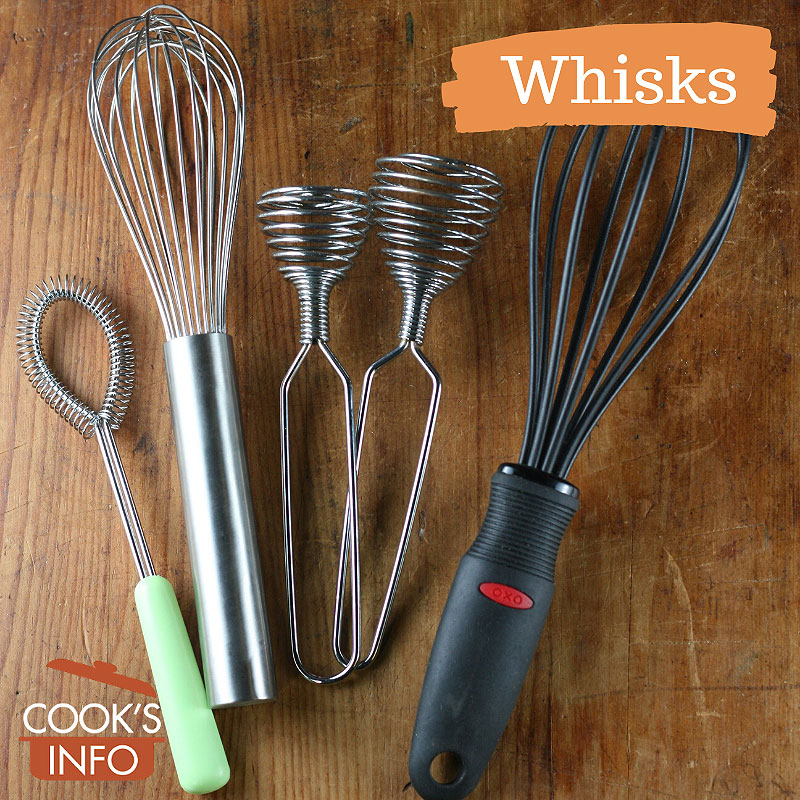 A whisk is a kitchen tool using for blending, whipping, incorporating air and eliminating lumps in food.

Most whisks are hand-held and hand-powered, though some mechanical and electronic versions are available.

Once seen in North America as something just for people who also have expensive copper pots, whisks are now very affordable and available even in discount stores. Many people have a collection of them in different shapes and sizes.

Whisks can be made of metal, nylon plastic, wood or bamboo. Wooden ones break easily. Nylon whisks are quite flimsy and don’t have a lot of whisking power. Silicone-coated wire whisks are better. Better quality metal whisks have the handle sealed at both ends.

Not all types of whisks are dishwasher safe. Check before you buy if this is important to you.

It’s best not to risk using metal ones in non-stick pots or pans, as you may damage the non-stick surface of your pot. This is when nylon whisks, despite not having a lot of oomph, are useful.

The nomenclature of whisks can be confusing, and often English will use the same term for different ones. French terminology has the same problem. Note that in English at least two very different whisks are referred to as a “French Whisk”, whereas as in French, as you’d expect, there is no such thing as a whisk called a “French Whisk.”

For blending, a spoon or a fork will do. For whipping, an electric hand mixer or a blender.

The earliest whisks were bunches of twigs tied together. Whisks were mentioned as early as 1765 by Susannah Carter. 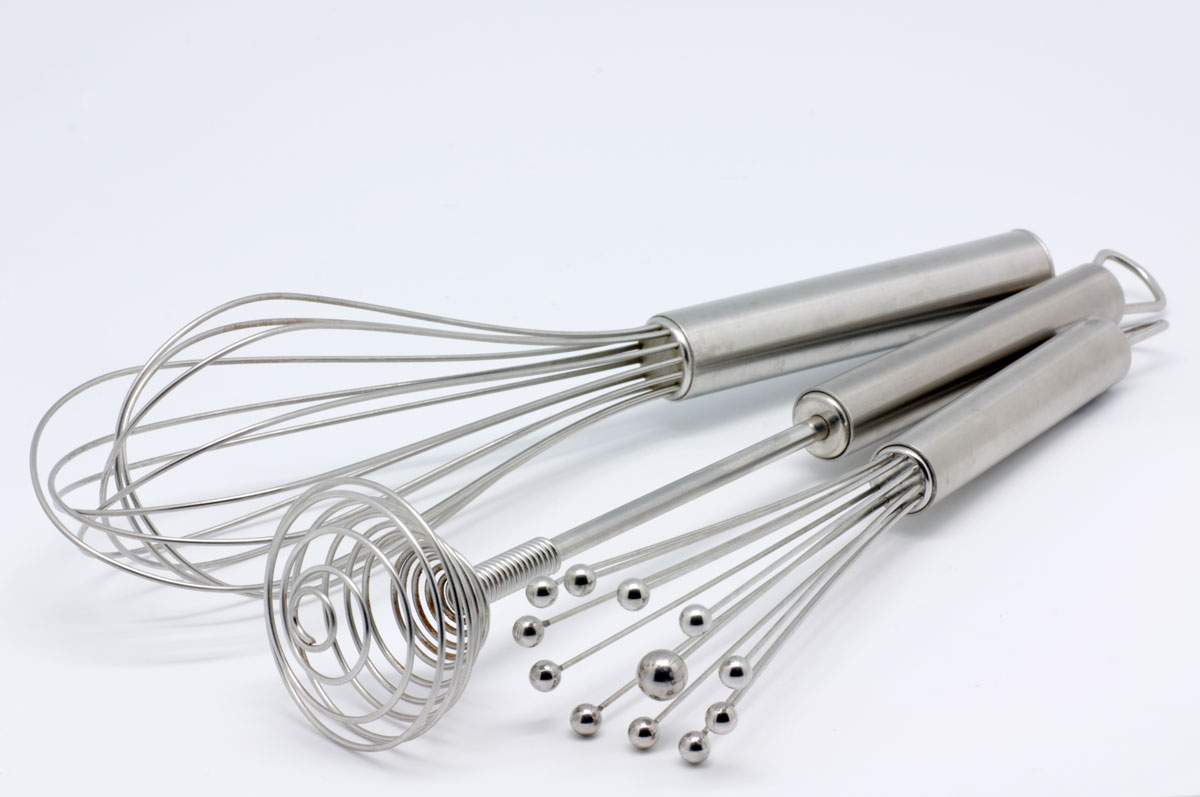 “A White Syllabub: Take two porringers of cream, and one of white wine, grate in the skin of a lemon, take the whites of three eggs, sweeten to your taste, then whip it with a whisk; take off the froth as it rises, pour it into your syllabub-glasses or pots, and they are fit for use.” — Susannah Carter. The Frugal Housewife: Chap. XIV. Of Syllabubs, Creams, and Flummery. London: Francis Newbery. 1765.

The English word “whisk” came from the Norse word “viska” which meant to plait or braid. 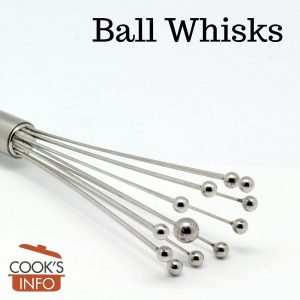 Steel ball whisks have tines that are not connected at their ends; instead, they end in small metal balls. Fans swear they are more efficient than regular whisks. 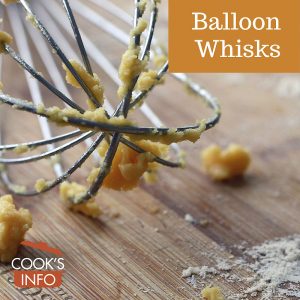 Compared to standard sauce whisks, balloon whisks have thinner tines which are further apart. They are designed to introduce a lot of air into the food item being prepared. 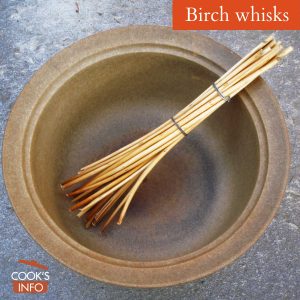 Birch whisks are made of fine, stiff birch twigs bundled together. The whisks are flexible, and thus good for light sauces 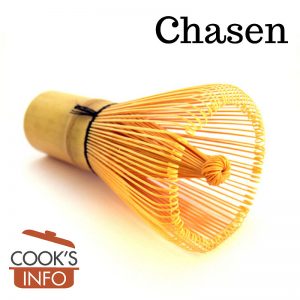 Chasen are small bamboo whisks used for mixing Japanese powdered tea. They are not meant to last forever: worn-out ones are taken to temples once a burnt and ceremonially burnt there. 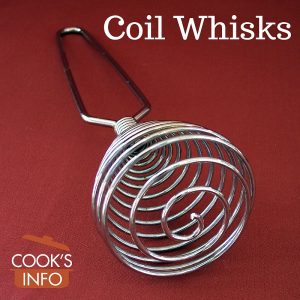 Coil whisks are ideal for mixing or blending in a confined space such as a small bowl. Rather than making the traditional circular whisking motions, you just press up and down on the whisk, or twirl the handle between the palms of your hands. 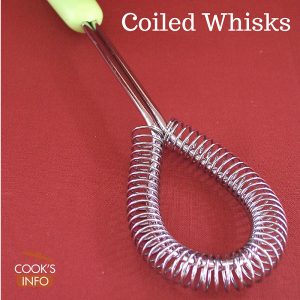 Coiled whisks are rounded frames wrapped with coiled wire. They are used for mixing in small vessels, where other whisks won't fit or do a proper job. 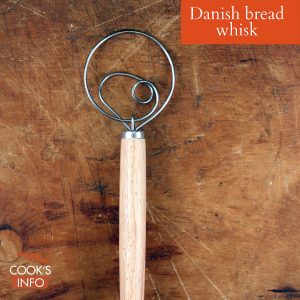 A Danish bread whisk is a heavy-duty implement designed to beat heavy dough for bread. It mixes without incorporating air. 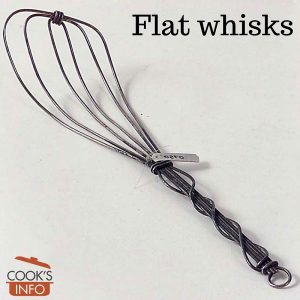 Flat whisks are good for blending in low-sided pots. They can also be used as a "strainer spatula" for lifting things such as poached eggs out of water. 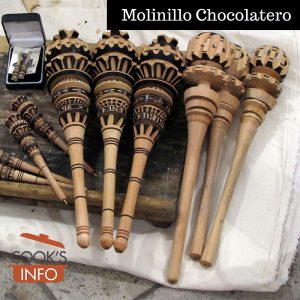 A molinillo chocolatero is a stirring tool used in Mexico for making frothy beverages (coffee, chocolate, atole, etc.) They are made of ridged wood, and rubbed between your hands as you would a spinning top. 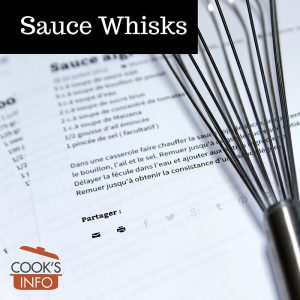 Sauce whisks have closely-spaced tines. They are used for heavier sauces and light batters, but they are not strong enough for doughs. They will eliminate lumps, while introducing some air.