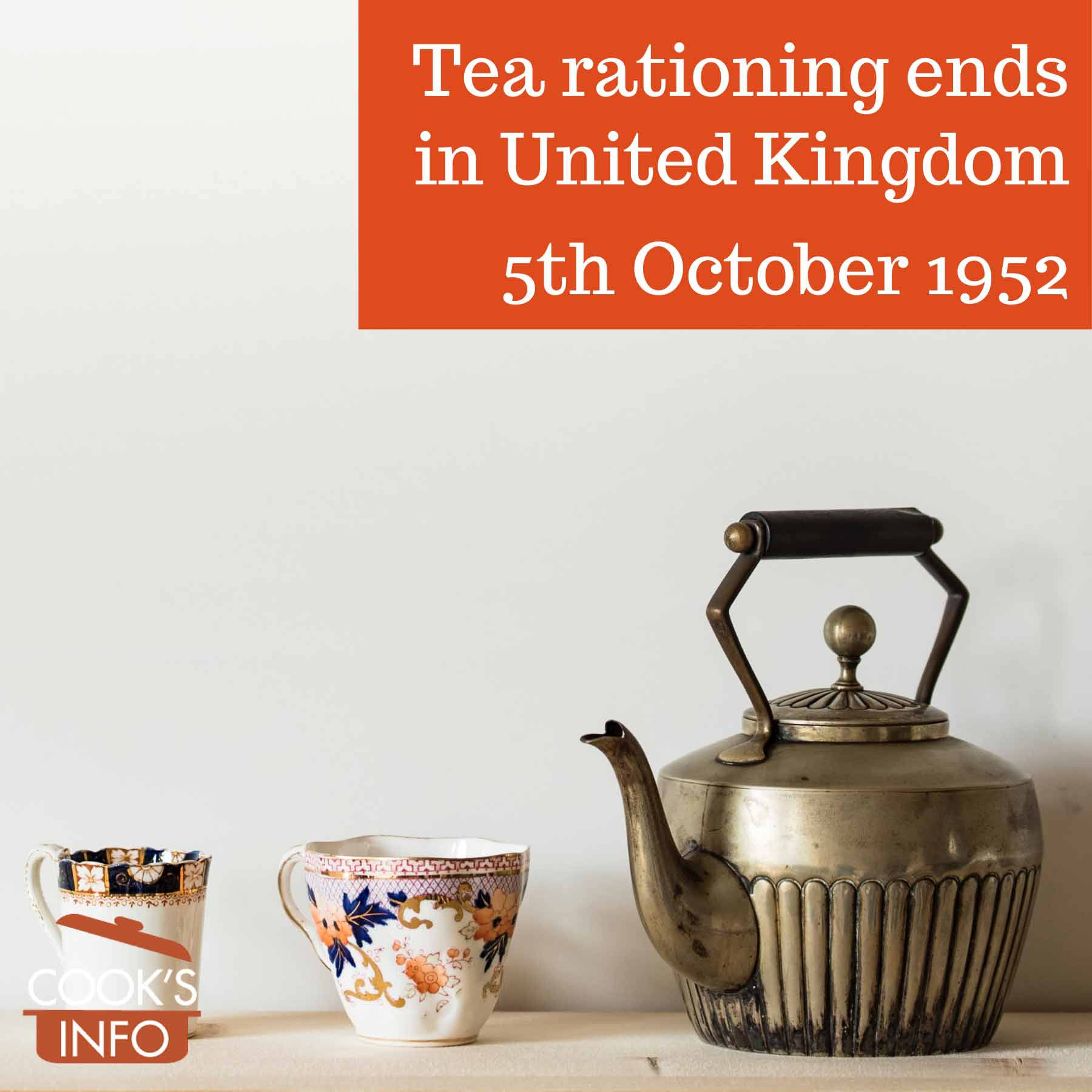 The good news was that coffee was never rationed — though simply because it really wasn’t that popular in the UK at the time! The bad news for those who liked a bit of sweet in their tea was that sugar would stay on the ration for another five months, until February 1953!

Advice was given out on how to make the tea ration stretch:

“Many housewives still complain that the family tea ration won’t stretch sufficiently. Well, this is simply because they’ve made no real attempt to make it do so. For some reason there is a most optimistic attitude towards tea — periodically there is a rumour that it is going to be increased. And so even the most careful housewife dips just a little more heavily into the tea caddy than she should. Unfortunately, the rumour proves only a rumour, and the tea caddy still remains emptier than it otherwise would. Here is one good tip for saving tea. So many households have an extra cup of tea — either as early morning tea or elevenses and sometimes during the evening. In future, instead of pouring away any remaining tea after breakfast, fill the pot with sufficient boiling water. Allow it to stand and strain off into a Thermos flask. This will be excellent for your elevenses and save not only tea but labour as well. The same can be done after the evening cup of tea. This will then be ready for the early morning cup or if you have to get up for an air raid. Do try it — you will be surprised how much tea you can conserve.” — Be Careful with the tea. Burnley, England: Burnley Express. Saturday, 29 July 1944. Page 6, col. 2. 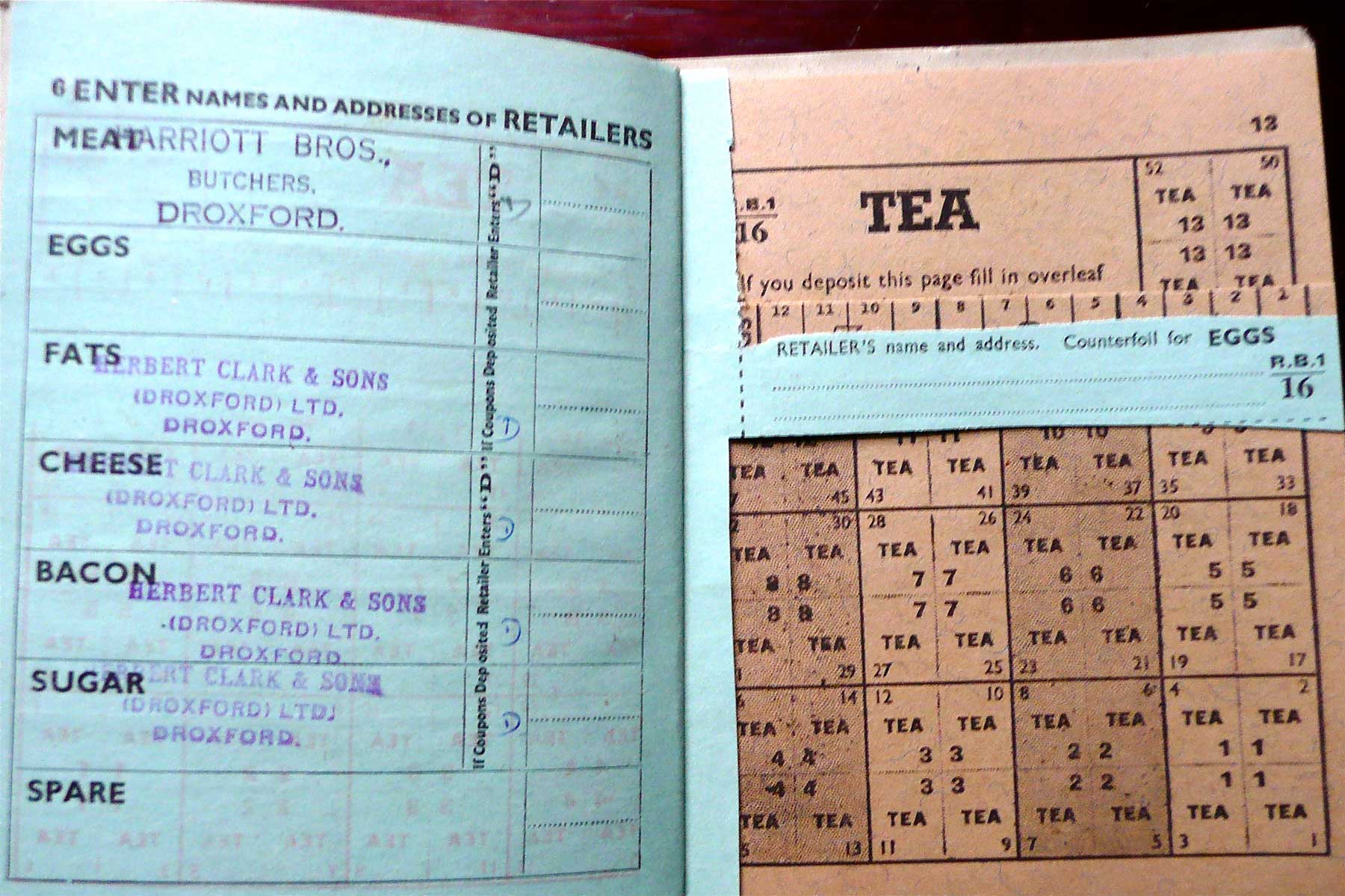 History of WWII Tea Rationing in the UK

Tea had first gone on wartime ration in July 1940. The ration was 2 oz. of tea for an adult, per week, which would allow a person about 3 cups a tea daily.

From July 1942 children under 5 received no tea ration and people over 70 were granted an additional allowance from December 1944 onwards. Tea was de-rationed in October 1952. [1]Zweiniger-Bargielowska, Ina. “Rationing, Austerity and the Conservative Party Recovery after 1945.” The Historical Journal, vol. 37, no. 1, 1994. Appendix I, page 195.

The amount allocated varied from time to time. For several years, a limited-time Christmas tea ration bonus was given out:

In January, 1950, the extra half oz. of tea for the over 70s ration was reduced — and seniors were not happy about it.

“The action of the Ministry of Food in halving the half-ounce extra tea ration allowed to people of 70 years and over when the general tea ration was increased half an ounce per person was criticized at the monthly meeting of Tynemouth and District Grocers’ Association held at North Shields last night under the chairmanship of the President, Mr Sid Cozens.

Mr Cozens, making the criticism, said many of the old people were not aware of the reduction until they visited the grocer. They took it very badly — in fact many of them would not believe it, when told about it by the grocer.

Mr T.D. Lamb said that the Ministry of Food took great care not to give much publicity to the reduction. If it was in fact mentioned in Food Facts it was in very small type. It had been left to the grocer to explain as had so often been the case when any announcement that was likely to be impalatable to the public was made by the Ministry. He thought the Ministry could have spared the cut. The extra tea ‘was one of the few comforts the old folks had, and to take half away from them was a very mean act. Mr J.H. Sadler agreed that it was a deplorable action, and said it had caused deep disappointment.” — Mean, deplorable cut in old folks extra tea. Tynemouth, Northumberland: Shields Daily News. Tuesday, 17 January 1950. Page 6, col. 5.

The tea ration increase in fact kicked in a month earlier, on the 13th of July 1952:

“Increase in the tea ration from 2 oz. to 2 ½ oz. a week will take effect from 13 July, a month earlier than had been previously announced and at the rate of 3 oz. per week and 2 oz. per week in alternate four weekly ration periods.” — Ration Change. Bradford, Yorkshire: Bradford Observer. Friday, 16 May 1952. Page 1, col.

The ration for people aged 70 years and over will be increased from 3 ozs. to 3 ½ ozs. a week, and corresponding adjustments will be made in the allowance for establishments. The coupon arrangements will be:

“Tea coupons in ration book R.B.1, and on temporary ration cards R.B.12 and R.G.5 will be worth 3 ozs. a week. Each coupon on form R.G.64 (issued to people aged 70 and over) will continue to be worth ½ oz. a week. The value of tea coupons on leave or duty ration cards R.B.8A. and in the weekly seaman’s ration book R.B.6 will be unchanged. The Ministry state that the expected improvement of the stock position has taken place and the total stocks of tea in the country support the hope of an early end of tea rationing, but though total stocks are good, the amount of packeted tea now in the shops is not sufficient to meet the impact of derationing. The raising of the ration to three ounces is designed to raise stocks in the distributive pipe-line. The Minister of Food (Major Lloyd George) said last April that he hoped the complete derationing of tea would be possible by the end of this year.” — Tea ration going up to 3 ozs. from September 7. Londonderry, Northern Ireland: Londonderry Sentinel. Saturday, 30 August 1952. Page 2, col. 1.

The complete end of tea rationing was finally announced on Thursday, the 2nd of October in Newcastle-on-Tyne, England, and came into effect a few days later on Sunday, 5th October.

“Tea is to be derationed on Sunday, and the price control of tea scrapped that day, Mr Gwilym Lloyd George, the Food Minister, announced in Newcastle yesterday. He told a North Newcastle Conservative Women’s Association luncheon meeting: “We are known as a nation of meat eaters and tea drinkers. I wish I could say that I could deration meat. I cannot do this, but I can tell you that the other staple item in our diet is to be derationed on Sunday.

Extra consignments of tea are now being rushed to shops throughout Britain to ensure that the success of ‘T-Day’ will not be ruined by panic buying. In London last night spokesmen for the biggest tea distributing and using company in the country said that ‘stocks are ample, and there is more than enough tea for all comers.’

Mr Lloyd George added yesterday: ‘I know I have been much criticised because I put up the maximum control price of tea by tenpence a lb a few months ago, but what has been the result? The trade has exercised the utmost skill in buying, blending and distributing, with the result that very few teas went up by the maximum increase of tenpence. Already two of the largest distributors have been able to reduce their prices, and I feel sure that prices will remain steady and will not increase.'” — No Panic move to tea-free Sunday. : Daily Record. Friday, 3 October 1952. Page 8, col. 1.

The lifting of tea rationing even caught the attention of the New York Times:

“Prime Minister Churchill’s Government gave the British people today the best piece of news they have had since it came to power nearly twelve months ago. Beginning next week, tea will be on sale freely after twelve years of rationing.

Tea, on which the British depend so much for warmth, energy and solace and which they drink an average of four to five times a day, was one of the first food-and-drink items to be rationed early in World War II when Britain’s lifelines to the Empire where endangered and shipping space was required for more urgent needs.

Tea rationing at two ounces a week per person was introduced in July, 1940. Since then, and until Sept. 3 of this year when the ration rose to three ounces weekly, it varied between two and two and one-half ounces — far below the pre-war consumption and even further below the amount the British people would have consumed during the nerve-wracking war years had it been freely available.

The end of tea rationing, which was announced by Food Minister Gwilym Lloyd George at Newcastle-on-Tyne was not unforeseen. Nevertheless it raised hopes that eventually the restrictions might also be lifted on meat, which at present is rationed to the amount of just over half a pound a person a week.

The decision raised an immediate demand for more sugar with which to sweeten the tea. The British have a sweet tooth and since the end of the war housewives have grumbled that they could not manage on the ration of ten ounces weekly.

The control of the price of tea, which has been kept at an average of four shillings and ten pence a pound ($.68), will end with rationing. Tea once again will be sold at various prices, depending on the quality.” — Long, Tania. Lifting of 12-Year-Ban Raises Hopes for More Meat soon. New York, NY: The New York Times. Friday, 3 October 1952. Page 6, col. 2. 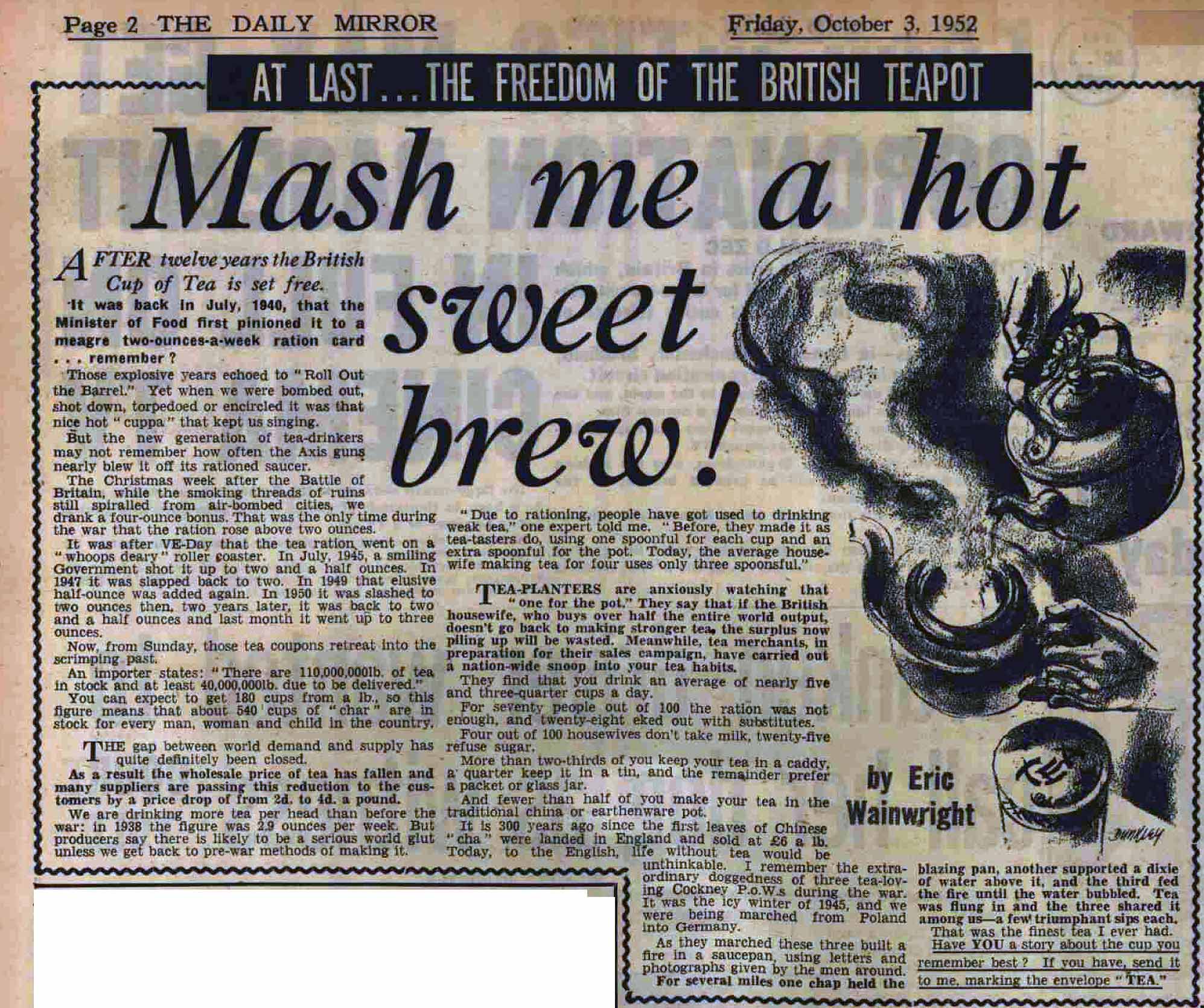 Some people rushed to use up the last of their tea ration coupons before they were no longer valid. Either they were so used to the coupons being worth something that they couldn’t bear to see them to go waste, or, they were afraid there’d be such a rush that, rationed or not, there’d be no tea available:

“Tea Stampede: Many shoppers in London and Surrey areas yesterday [Saturday] rushed to use their last tea coupons — scared that supplies would run out when tea comes of the ration tomorrow [Sunday].” [4]London, England: Sunday Mirror. Sunday, 5 October 1952. Page 3, col. 2.

“In the United Kingdom, which before the war absorbed about half of the total supplies entering international trade, rationing continued and total consumption was about 10,000 tons lower than prewar, despite the increase in population. Imports rose in 1951 to almost prewar levels, but most of the increase went for rebuilding stocks and did not enter current consumption… On the consumption side, the most important development is the increase in the United Kingdom ration which will raise import requirements by about 30,000 tons a year. Indications are that further relaxation of United Kingdom control of consumption and imports might be announced if production expands and prices do not advance unduly.” [5]Food and Agricultural Organization of the United Nations. The State of Food and Agriculture: Review and Outlook 1952. Rome, Italy. October 1952. Page 104.

They had anticipated world supply to increase in 1952, but projected that that increased supply would in the event just be absorbed by the now-unrestricted tea demand in the UK:

Video of tea sustaining workers at a factory:

This web site generates income from affiliated links and ads at no cost to you to fund continued research · Information on this site is Copyright © 2023· Feel free to cite correctly, but copying whole pages for your website is content theft and will be DCMA'd.
Tagged With: Tea