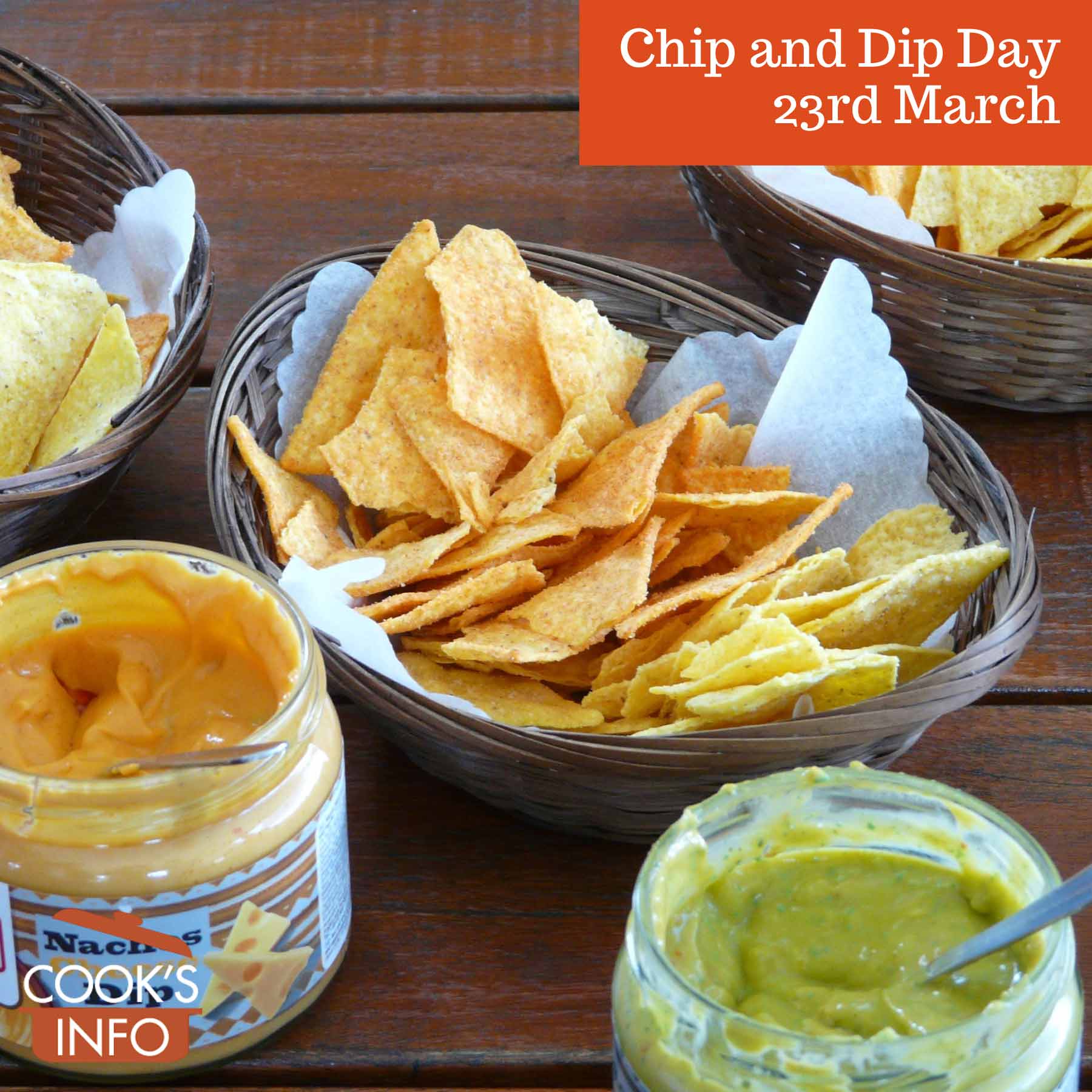 The 23rd of March is Chip and Dip Day.

Chip and Dip is an easy-to-eat dish that provides a blend of creamy and crunchy textures. It appears at about just every party because crowds love it, and it is a quick and easy party dish to throw together for them.

Some people argue that chip and dip should be its own food group.

When big storms are forecast to hit, Americans strip supermarket shelves bare of chips and dips.

Typically the chips are made of potato or corn. What format of chip do you feel is better for dipping, plain or ridged?

For a change, you could use pita chips. Crackers could also be used as honorary stand-in chips.

Dips are typically creamy, but a chunky salsa could count as a dip, too.

To celebrate today, you could have some friends over, and offer them a selection of chips and dips as a meal.

Have a selection of different dips on hand: some hot, some cold, some baked.

If you have time enough in advance, buy yourself a chip and dip serving set, maybe even a retro one from the 1970s, which was their heyday.

Weight Watchers has many recipes for lighter dips. You could also use slices of stiff veg as the chips, such as zucchini slices or celery sticks.

For dessert, you could try a sweet dessert dip, with a bowl of frosting or pudding to dip cookies or fruit into.

Double-dipping — dipping a chip in dip, taking a bite, then dipping it back in — is considered a grave party sin. Would you still want any dip after you had seen someone double-dipping in the bowl?

It’s generally considered very unhygienic by health professionals. On the other hand, the “Myth Busters” team on television did do an episode (Episode 116, 22 April 2009) on double dipping, and they seem to think there is no cause for alarm.

“In their experiment, the MythBusters used chips with regular dip and salsa. In the control test, they put the untouched dip and salsa into petri dishes, and followed with double dipped dip and salsa, and finally dip and salsa that had been put in Adam and Jamie’s mouths. However, when they examined their results, they found that the dip and salsa were already loaded with microbes. For a more accurate experiment, the MythBusters were forced to sterilize all their testing materials with radiation and create a sterile environment. Examining the results, the MythBusters found that double dipping produced less microbes than putting all the dip in your mouth. Also, the amount of microbes present after double dipping was negligible compared to the amount found in regular dip.” — MythBusters Episode 116: Banana Slip/Double Dip. Synopsis. Accessed March 2021 at https://mythresults.com/banana-slip-double-dip.

A classic mid-20th century American dip was “French onion”, made with sour cream and a package of dry French onion soup mix.

The earliest mention that CooksInfo has found of a 23rd of March “Chip and Dip Day” in print archives dates from 1996 in Pennsylvania:

In 2015, Tostitos brand chips held a promotion that anyone named “Chip” would get a free dip. You had to go to their website and just submit proof that your name was Chip. [1]LA TV FILM. Good News For Chip Citizens On ‘National Chip & Dip Day’. 21 March 2015. Accessed March 2021 at https://latfusa.com/article/2015/3/good-news-for-chip-citizens-on-national-chip-dip/