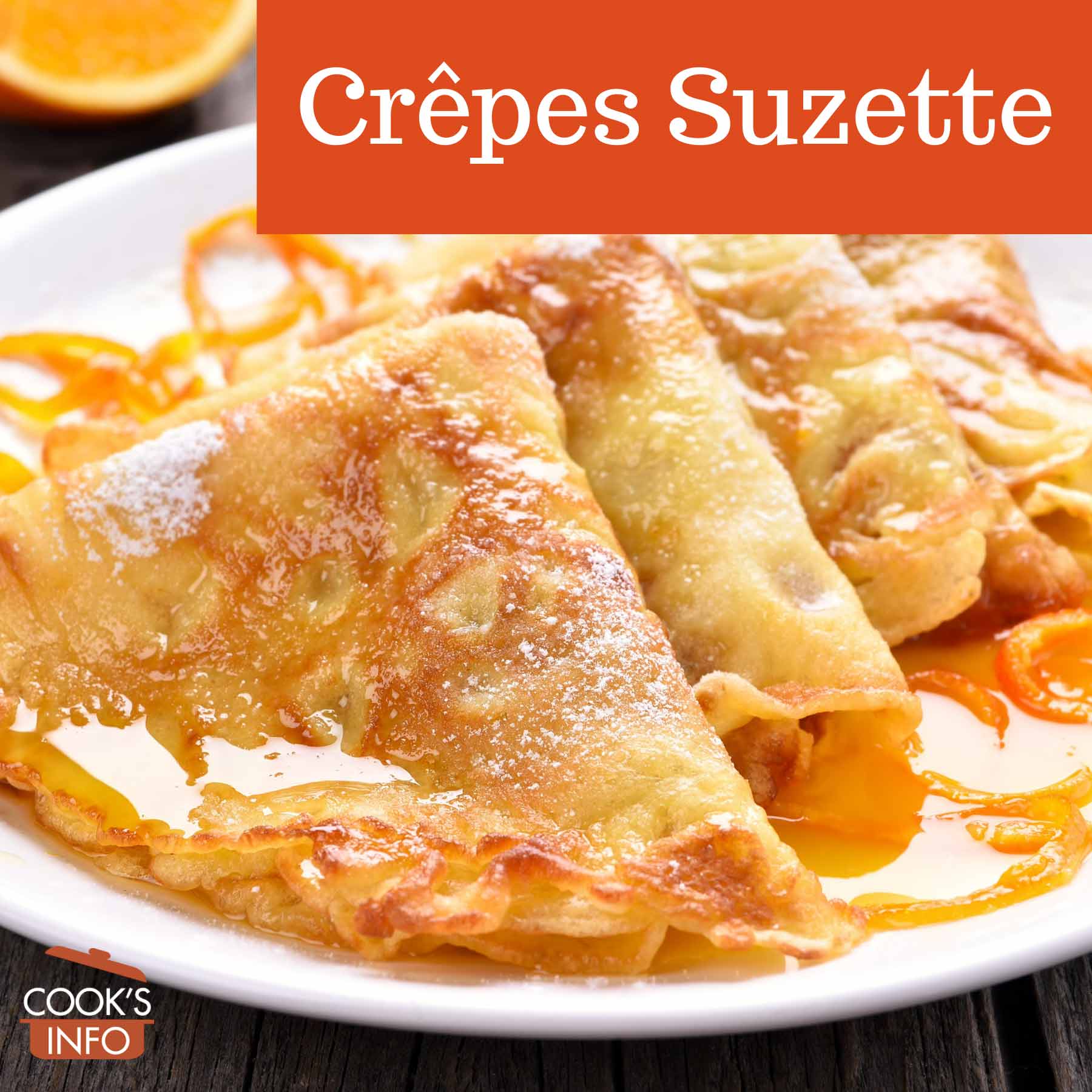 A Crêpe Suzette is dessert dish consisting of a crêpe (thin pancake) served warm folded in half or four with a warm orange sauce on it.

If the origin story by Henri Charpentier (see History below) is true, the dish was first served as a breakfast dish.

The Composition of Crêpe Suzette

Generally, the sauce is made of caramelized sugar, orange zest, orange juice, and an orange-flavoured liqueur such as Grand Marnier, and brandy. The slight bitterness of the orange zest counteracts the sweetness. The brandy is lit to burn off some of the alcohol and to meld the flavours in the sauce.

In restaurants, Crêpe Suzette is usually finished at the table in a chafing dish [1]More usually now, a shallower dish called a “Crêpe Suzette” dish is used.so diners can see the spectacle of the flambéing of the sauce. (The actual crêpes are prepared in advance in the kitchen.)

There is, though, another method to prepare Crêpe Suzette, as defined by Georges Escoffier in his 1903 Guide Culinaire. The crêpe batter is flavoured with curaçao and mandarin orange juice. A compound butter (beurre Suzette) is made of creamed butter, sugar, mandarin orange juice, mandarin zest, and curaçao (the curaçao used is the clear, obviously — not the blue.) The crêpes are cooked, then while still hot spread with the butter, folded into four, and then served hot. There is no sauce, apart from the melting butter, and no flambée that happens.

Some sources maintain that Crêpes Suzette was created at the Marivaux restaurant in Paris in 1897. Others suggest it was invented by Georges Escoffier. However, the French chef Henri Charpentier (1880 – 1961) repeatedly laid claim his entire life to being the inventor of Crêpes Suzette in 1896, even providing the occasion and time of its creation. He repeated the story in such detail and so often that to look for another origin one must call him an outright liar.

It was 65 years ago [Ed: 1896], but Henri Charpentier, one of the last of the great chefs, remembers that breakfast on the terrace of the Café de Paris in Monte Carlo as if it were this morning. That’s the day he created Crêpes Suzette. Charpentier is 81, and now it takes four years to get a reservation at his tiny restaurant. But let him tell the story of that breakfast, and where it led:

“I was only 16 and serving the Prince of Wales, son of Queen Victoria, later King Edward VII of England. Among the diners at the Prince’s table was a beautiful French girl named Suzette. I cannot recall her last name. It does not matter. His highness ordered crêpes — the French pancakes. I mixed the sauce, and added a brandy blend of my own. As I did, the heat of the chafing dish accidentally set the simmering cordials afire.

“I was embarrassed but I did not show it. I poured the fiery sauce of the crêpes, as if the flames were set on purpose. The prince tasted. Then he smiled and said: ‘Henri, what have you done with these crepes? They are superb.”

“I was thrilled and offered to name them in his honor. But he declined. ‘Henri,’ he said, ‘we must always remember that the ladies come first. We will call this glorious thing crêpes Suzette.’

“That was the day, monsieur. People had been eating pancakes from the days of Napoleon — even the Romans, but never before that, day crêpes Suzette.” [2]Bacon, James. Kitchen Still First Love of Veteran French Chef. Petersburg, Virginia: The Progress Index. 5 April 1961. Page 21.

For the record, Charpentier used the sauce method, as opposed to the beurre Suzzette method:

“THE FINE NONCHALANCE of Henri Charpentier, the courtly, white-mustached originator of crepe suzettes, in his excellent new restaurant (tucked away in the Park Dearborn) as he pours Cointreau and brandy directly from the bottles without measuring it but with a great flourish, into the pan for the sauce . . the lusciousness of the sauce AND the crepes.” — Cass, Betty. Day by Day: Impressions of Chicago. Madison, Wisconsin: Wisconsin State Journal. 5 May 1942. Page 13.

This web site generates income from affiliated links and ads at no cost to you to fund continued research · Information on this site is Copyright © 2022· Feel free to cite correctly, but copying whole pages for your website is content theft and will be DCMA'd.
Tagged With: Crêpes, French Food