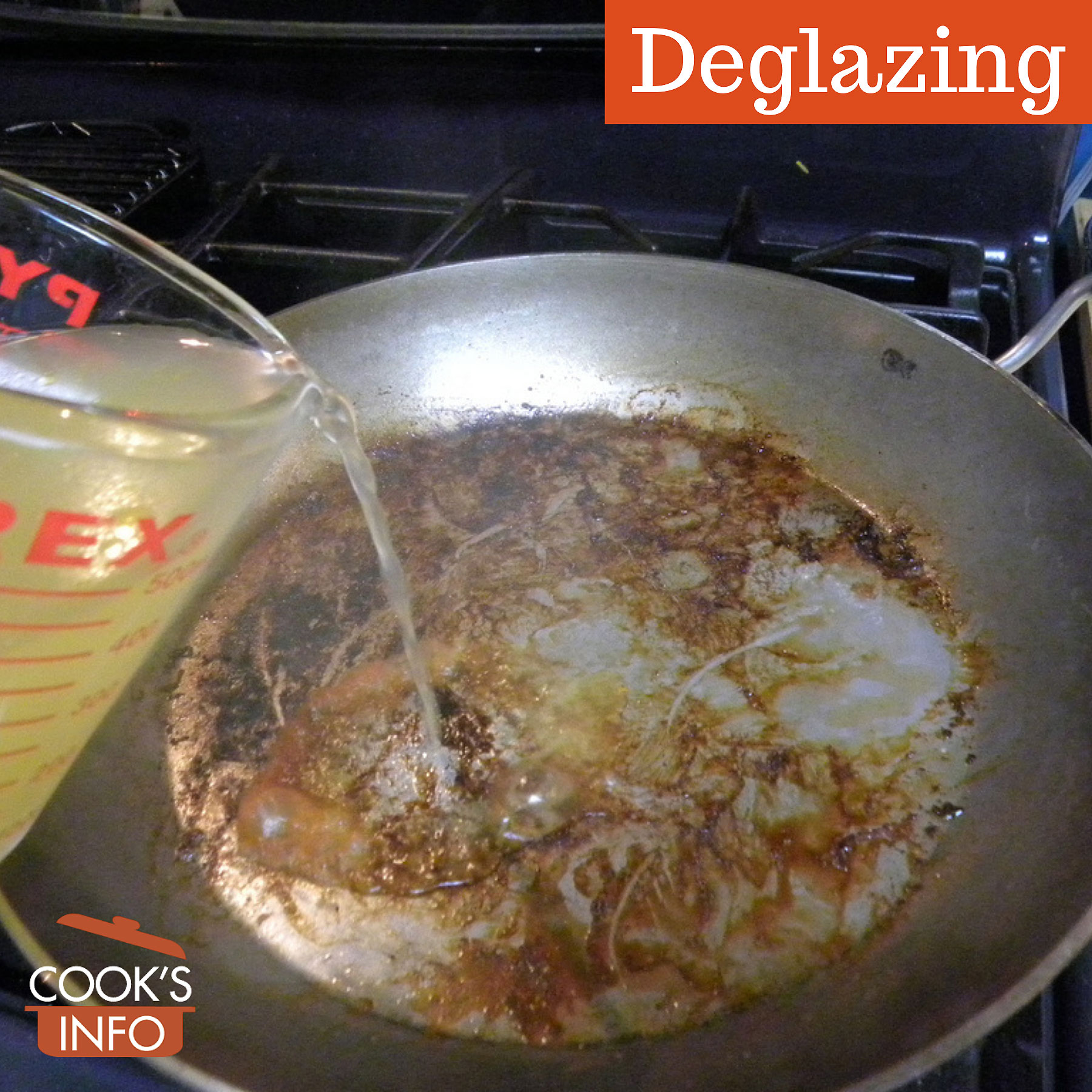 Deglazing is the technique of adding a liquid to a pan that has been used to brown food, either meat or veg, after the food has been removed. The pan is scraped so that the browned, flavourful bits are picked up by the liquid.

The French call the browned bits the “fonds.” These brown bits are actually carmelized sugars from the meat and vegetables. They form a rough “glaze” on the bottom of the frying pan. It is a great shame to waste them, as they are very flavourful. The flavoured liquid that is produced through deglazing makes one of the best bases for sauces. The added bonus is that you’ve also done some of the clean up for the pan.

“In the process of cooking à sauter certain aromatic roasting substances develop in the bottom of the pan. These are formed by the slight loss of meat juice which collects in the bottom of the pan and this becomes lightly caramelized. Care should always be taken to see that these juices merely caramelize and do not become too dark and bitter. After the food has been removed from the pan and the surplus fat poured off, the pan can be deglazed or rinsed with stock or this residue can be scraped up and mixed with some liquid – – usually wine or stock, boiled down and used to make a sauce. If it is too dark the sauce will be bitter.” [1]Pellaprat, H.P. Modern French Culinary Art. London: Virtue & Company Ltd. 1969. Page 405.

The Penguin Companion to Food says that deglazing is:

“…a simple process by which liquid — stock, wine, water, or cream — is added to a container after browning meat or other food, to dissolve the residue. The bits adhering to the base and sides of the pan are scraped off and incorporated into the liquid. The residue includes soluble proteins and other substances which have leached from the food onto the surface of the pan; heating induces appetizing colour and flavour changes (the Maillard reaction) in these. Deglazing is a thrifty process, ensuring that the concentrated flavours are retained and become part of the sauce served with the food.” [2]Mason, Laura. The Penguin Companion to Food. London: The Penguin Group, 2002. Page 296.

The Larousse Gastronomique notes that the acidity of wines used will dissipate, leaving just the taste, and that whatever liquid is used is reduced by simmering:

“Deglazing is done by pouring a small quantity of liquid into the pan over the heat, dissolving all the pan juices in it, leaving it to cook and take on colour, then reducing it until the right consistency is achieved. In the course of this operation, wines lose their acidity… When the deglazing liquid is well reduced, it is moistened with stock (clear or thickened), bouillon, fumet, etc., in order to make gravy or sauce.” [3]Lang, Jennifer Harvey, ed. Larousse Gastronomique. New York: Crown Publishers. English edition 1988. Page 365.

Spoon or tip any excess fat out first. For the deglazing liquid, you can use water, stock, or alcohol such as wine, vermouth or beer, or a juice such as lemon juice or onion juice, or verjuice. Some sources suggest that you shouldn’t use anything acidic such as wine or juice to deglaze a cast-iron pan, as it will pick up a metallic taste. In any event, use enough liquid to cover the bottom of the pan. Add the liquid, then scrape the pan well, to loosen up the browned flavour bits. After scraping, let it cook for a few minutes to reduce the liquid.

You add this flavoured liquid to whatever dish you are making.

Sometimes pieces of meat such as beef are dredged with flour before frying them, in which case the flavoured liquid will also be thickened from the flour left in the pan.

Deglazing is much harder to do in a non-stick pan, as you won’t get many or any browned particles sticking to the bottom of the pan in the first place.

The term “deglazing” is, admittedly, a professional term used by chefs for which no real everyday English word has yet come into play.