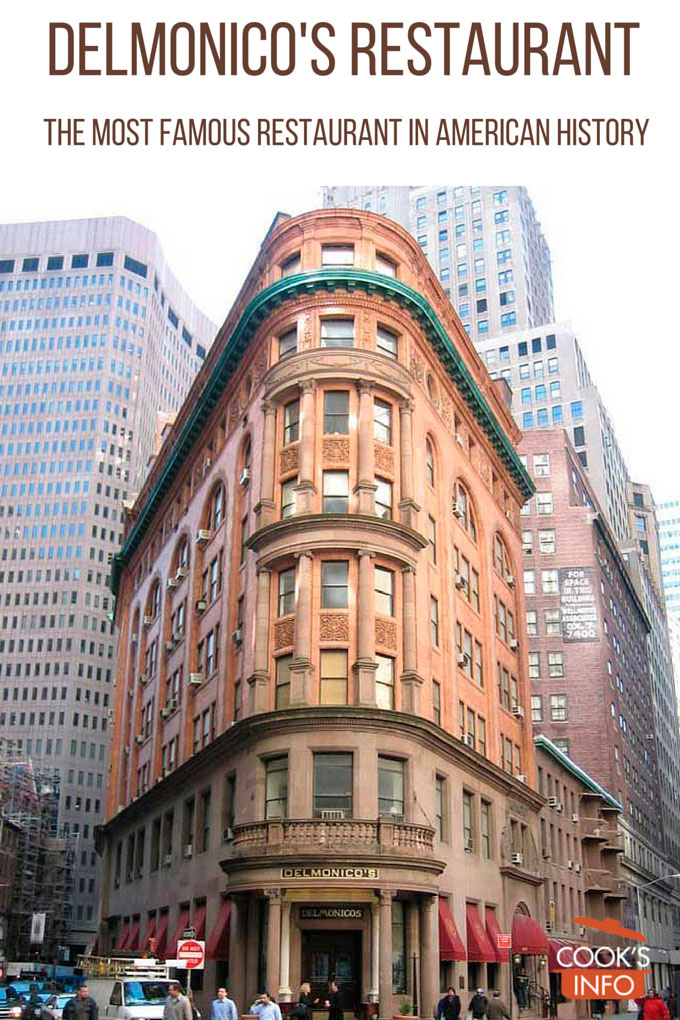 The most famous restaurant in America

Founded by Swiss immigrants in 1824, Delmonico’s Restaurant was the first luxury restaurant in New York, and over the course of almost 100 years defined “haute cuisine” in America.

Dishes invented at Delmonico’s include Baked Alaska, Delmonico Potatoes, Delmonico Steak, Eggs Benedict and Lobster Newberg. While Delmonico’s is sometimes credited as well with inventing Oysters Rockefeller, that dish was actually created in New Orleans: what Delmonico’s did was introduce it to New York.

In 1827, when Delmonico’s first started, public eating places in America were inns and hotels for the most part. You ate what was on offer that day, for a fixed price, at times set by the establishment.

Delmonico’s is credited with introducing to America the relatively-new French concept of a menu, with different things you could choose at different prices, and, to boot, you could come in at any time that suited your schedule. This menu, first printed in 1838, ran to 11 pages, and was in French with English translations (later, the menus had English on one side, French on the other.) [1]Steinberg, Ellen f., and Jack h. Prost. “A Menu and a Mystery: The Case of the 1834 Delmonico Bill of Fare.” Gastronomica, vol. 8, no. 2, 2008. Page 40. JSTOR, www.jstor.org/stable/10.1525/gfc.2008.8.2.40. They served the food on fine china.

Note: an 1834 menu offering items such as “pork and beans” for four cents, popularly credited to Delmonico’s, is actually a menu from an 1880s low-end restaurant that called itself ironically “Small Delmonico’s” run by a R. Barnabo. [2]There are several problems with the purported 1834 menu. The restaurant location on the menu says 494 Pearl Street, which was never a Delmonico restaurant location. One version of the menu adds that it was printed in 1834 by a printing company that only first appears in city business directories in the late 1800s, and the font used, Kitcat, was only invented in 1883. For the brilliant sleuthwork, see: Steinberg, Ellen. “A Menu and a Mystery: The Case of the 1834 Delmonico Bill of Fare.” 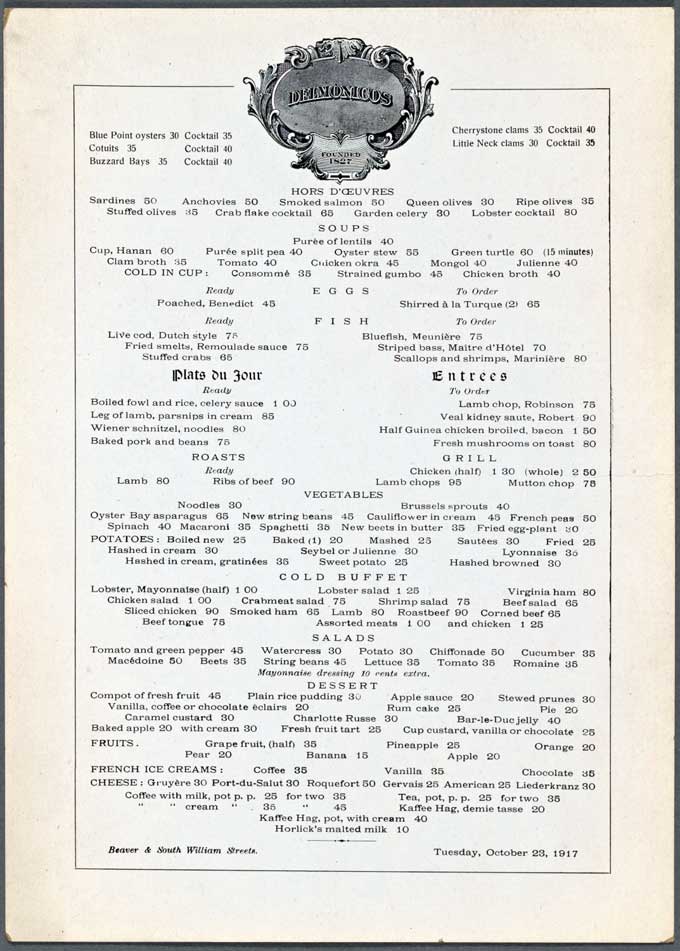 Famous for being famous…

Delmonico’s was legendary not only for its food, but for its high prices as well. There were times at Delmonico’s when, had its ceilings collapsed, the American political and economic structure would have been decimated, because of all the influential people gathered at the same times around its tables. Celebrities that frequented Delmonico’s over the years included Samuel Morse, Diamond Jim Brady and Lillian Russell, the Vanderbilts, the Rockefellers, the Morgans, the Astors, the Goodyears, the Bissells, Grand Dukes of Russia, Napoleon III, Charles Dickens and Mark Twain.

Despite being such an exclusive restaurant, Delmonico’s grew to be almost a mini-chain of six restaurants operated by the Delmonico family — a statement perhaps to how much wealth there was in New York at the time. But Delmonico’s style and dining couldn’t survive forever. Towards the end of the 1800s, the rich were being influenced by new food science discoveries talking about healthier eating. And, two government measures, some say, accelerated the demise of Delmonico’s. The first was the introduction of income tax in 1913 in America which reduced the seemingly-unlimited disposable income of the American rich. And in 1919, the introduction of Prohibition saw the last of Delmonico’s patrons stay home in droves, where they could have an illegal glass of wine with their dinner in secrecy. 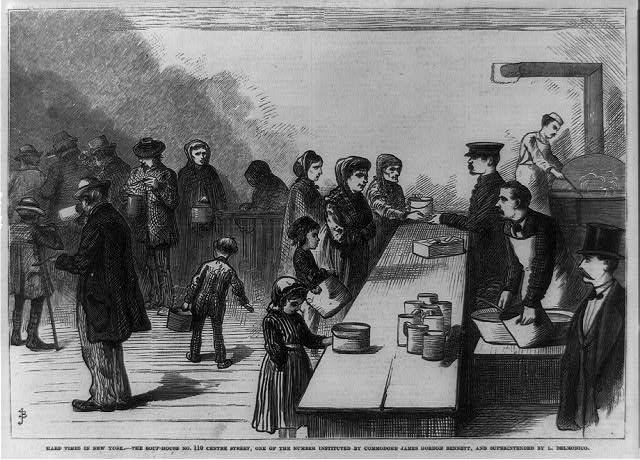 Over the years since, other establishments have opened with the Delmonico’s name. The Delmonico descendants attempted to prevent this, but a judge ruled that the name was available for use, because the family themselves had ceased trading under it.

A man named Oscar Tucci opened a restaurant called Oscar’s Oldelmonico (sic) Restaurant in the Delmonico building on South William Street in 1934. The public called it “Oscar’s Delmonico.” Tucci, aiming to recapture Delmonico’s original clientele, started with renting the basement and first floor, then expanded to reclaim the second floor for restaurant use in 1935. By 1943, the restaurant had taken over as well the first floor of the building next door at 48-54 Beaver Street. In the 1960s, it was managed by Harry Poulakakos, who would go on to open Harry’s at Hanover Square in 1972. By 1977, Oscar’s Delmonico was taken over by the Huber Family, who closed it in 1992. In 1999, it was reopened by a partnership called “Ocinomled”, that also runs other Manhattan restaurants. It is still in operation today (2007), now calling itself “The Original Delmonico’s”, and advertising that it has been in business since 1837.

Today, so many Delmonico’s exist all across the United States that most people would probably think it was a chain. What many of them have in common is advertising themselves as a “steakhouse”, and in the minds of many people, the name Delmonico’s now equals “steak.” 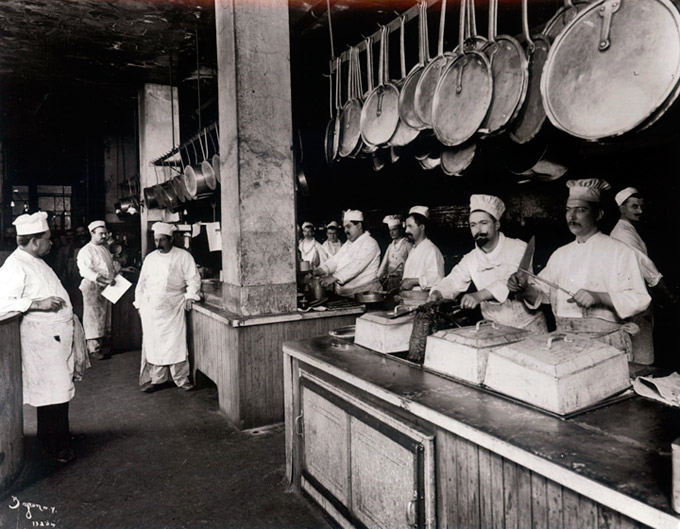 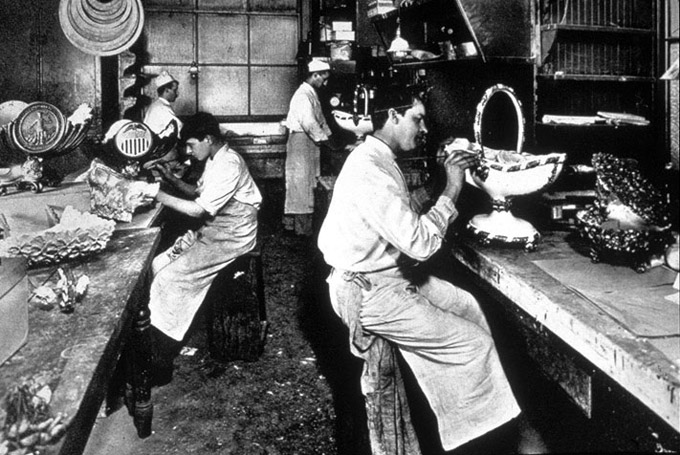 Photograph of a paste kitchen at a Delmonico’s restaurant, taken in 1902. Cooks are shown creating pièces montées from nougat and pate d’office (confectioner’s paste) in the confectionery section of the kitchen. The “basket” at left is ornamented with the seal of the New York Chamber of Commerce, and may be intended for a dinner put on by that entity. (Museum of the City of New York, from John A. Kouwenhoven, Columbia Historical Portrait of New York, 1953, p. 448.) 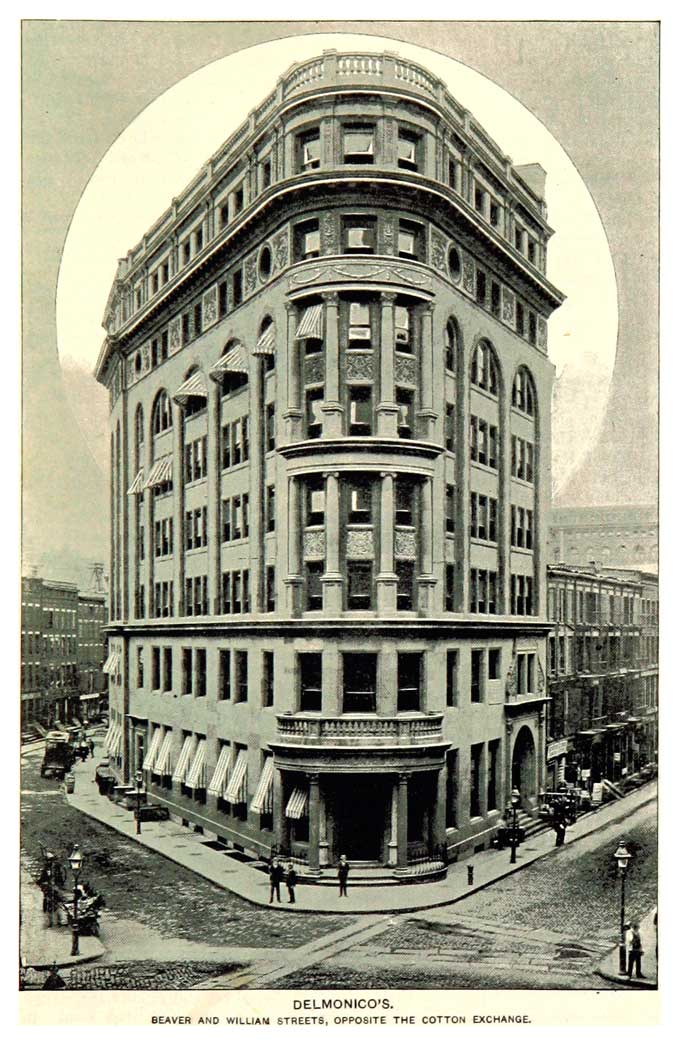 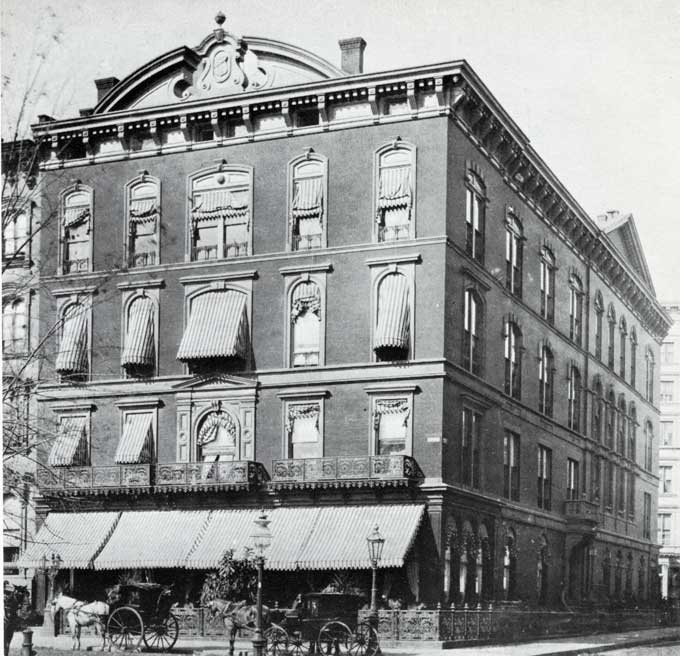 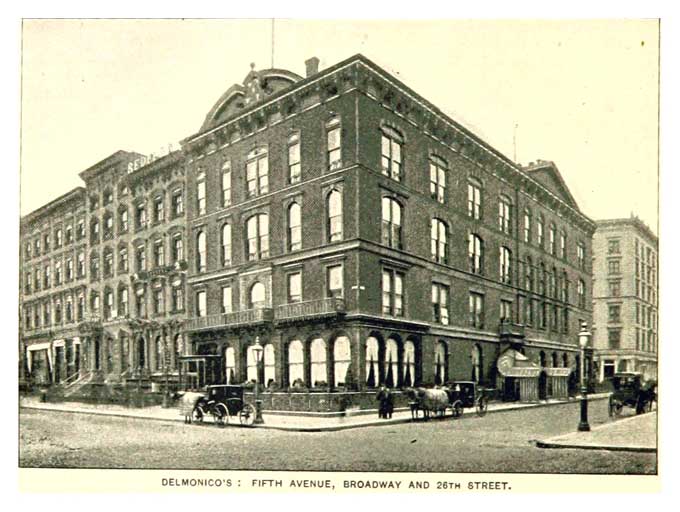 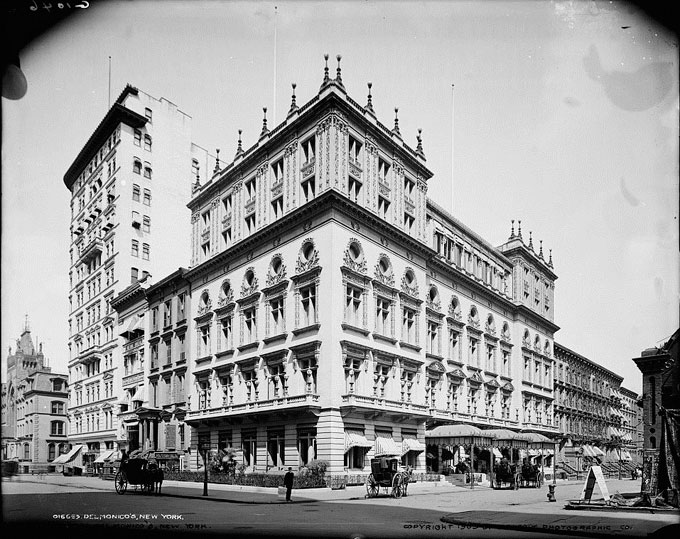 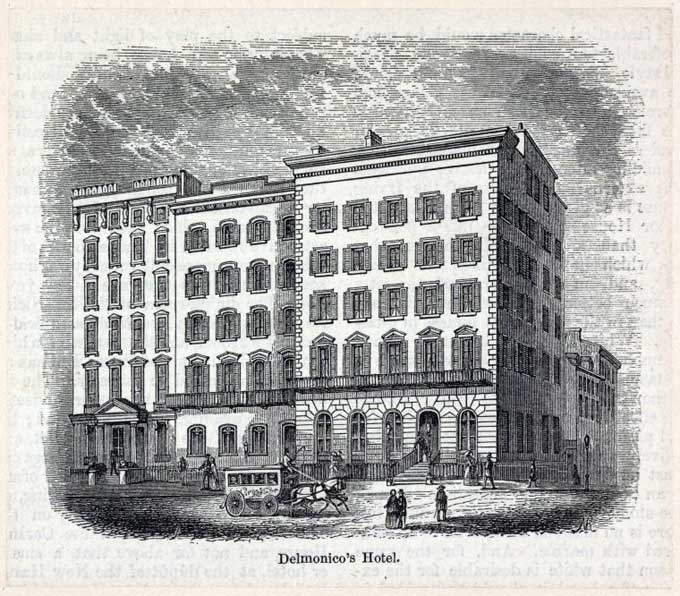 In 1835, Giovanni Delmonico, who was a trustee of Christ Church Catholic Church (at the time, the congregation was meeting in the basement of St Peters on Barclay Street), passed by the Dutch Reformed Presbyterian Church at 45 Chambers Street just as it was being auctioned off, and bought it for $55,000. The Christ Church priest, Father Varela, raised the money to pay him back, and in 1836 the congregation moved in, renaming the church to The Church of the Transfiguration.

Many members of the Delmonico family are buried in the cemetery next to St Patrick’s Old Cathedral, 263 Mulberry Street, New York.

When P.T. Barnum ran into financial difficulties in 1856, Lorenzo Delmonico joined with a group of other New York men (including Cornelius Vanderbilt) in offering to lend him money. (Barnum declined.)

From 1836 to 1863, there was no central bank in America to issue money. Businesses, states and cities issued their own. During the civil war, even Delmonico’s issued their own paper currency; it was accepted as good at many places other than just Delmonico’s.

Mark Twain’s 70th birthday was celebrated in 1905 in a private banquet room at the 44th Street Delmonico’s. Among the 150 people present were Andrew Carnegie, Emily Post and Mrs. Wilson Woodrow. 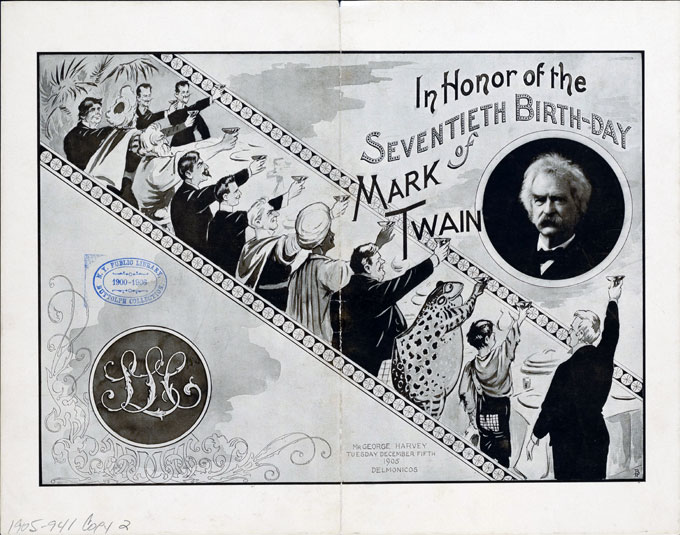 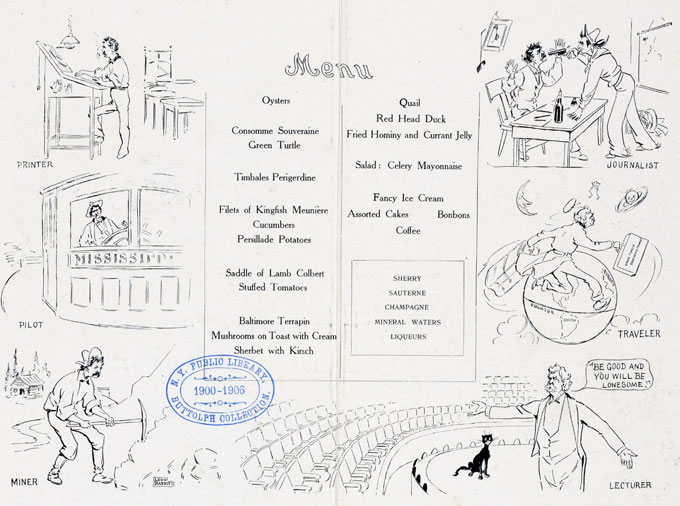 Urban myth often says that the Delmonico Steak was item number 86 on the menu (the story doesn’t say which version of the menu, as it changed over the decades, of course.) Because the steak was often sold out, the expression “86’ed”, so the story goes, was used by Delmonico staff to mean an item that is sold out.

Exasperated mothers in New York would often say to their children at dinner time, “if you don’t like what’s on your plate, go to Delmonico’s!”

“There have been many Delmonico’s. But for the purposes of fiction there has never been one just like the establishment that occupied a corner at the junction of the Avenue and Fourteenth Street. It was a more limited town in those days. The novelist wishing to depict his hero doing the right thing in the right way by his heroine did not have the variety of choice he has now. Two squares away, the Academy of Music was, theatrically and operatically, the social centre, so to carry on the narrative with a proper regard for the conventions, the preceding dinner or the following supper was necessarily at the old Delmonico’s. They were good trenchermen and trencherwomen, those heroes and heroines of yesterday! Many oyster-beds were depleted, and bins of rare vintage emptied to satisfy the healthy appetites of the inked pages. Somehow the mouth waters with the memory. When Delmonico’s moved on to Twenty-sixth Street, and from its terraced tables its patrons could look up at graceful Diana, there were many famous dinners of fiction, such as the one, for example, consumed by the otherwise faultless Walters, for a brief period in the service of Mr. Van Bibber—the menu selected: “Little Neck clams first, with chablis, and pea-soup, and caviar on toast, before the oyster crabs, with Johannisberger Cabinet; then an entrée of calves’ brains and rice; then no roast, but a bird, cold asparagus with French dressing, Camembert cheese, and Turkish coffee,” may be accepted as indicating the gastronomical taste of the author in the days when youth meant good digestion—but with the departure from the old Fourteenth Street corner something of the flavour of the name passed forever.” — Maurice, Arthur Bartlett. Fifth Avenue. New York: Dodd, Mead and Company. 1918.

“For years, the most important social event in New York had been the annual Assembly, held at Delmonico’s. And, for years, invitations to the Assembly had been rigidly based on the standards of ‘birth and breeding.’ An invitation to the Assembly was the ultimate proof of social rank.” — Stephen Birmingham. America’s Secret Aristocracy. Berkley Book, New York, NY 1990 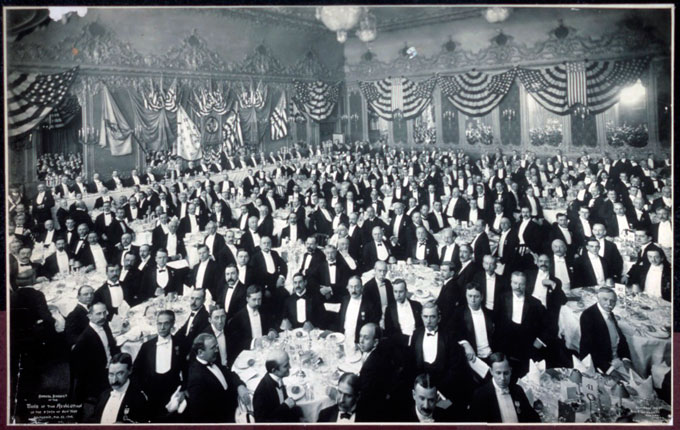 Buffalo Bill once played host to a small dinner party at Delmonico’s, and was surprised by the bill:

“During his stay in the city [Buffalo Bill] was made the guest of honor at sundry luncheons and dinners given by his wealthy entertainers. He found considerable trouble in keeping his appointments at first, but soon caught on to the to him unreasonable hours at which New Yorkers dined, supped, and breakfasted. The sense of his social obligations lay so heavily on his mind that he resolved to balance accounts with a dinner at which he should be the host. An inventory of cash on hand discovered the sum of fifty dollars that might be devoted to playing Lucullus. Surely that would more than pay for all that ten or a dozen men could eat at one meal. “However,” he said to himself, “I don’t care if it takes the whole fifty. It’s all in a lifetime, anyway.”

In all confidence he hied him to Delmonico’s, at which famous restaurant he had incurred a large share of his social obligations. He ordered the finest dinner that could be prepared for a party of twelve, and set as date the night preceding his departure for the West. The guests were invited with genuine Western hospitality. His friends had been kind to him, and he desired to show them that a man of the West could not only appreciate such things, but return them.

The dinner was a thorough success. Not an invited guest was absent. The conversation sparkled. Quip and repartee shot across the “festive board,” and all went merry as a dinner-bell. The host was satisfied, and proud withal. The next morning he approached Delmonico’s cashier with an air of reckless prodigality.

“My bill, please,” said he, and when he got it, he looked hard at it for several minutes. It dawned on him gradually that his fifty dollars would about pay for one plate. As he confided to us afterward, that little slip of paper frightened him more than could the prospect of a combat single-handed with a whole tribe of Sioux Indians.

But it would never do to permit the restaurant cashier to suspect that the royal entertainer of the night before was astonished at his bill; so he requested that the account be forwarded to his hotel, and sought the open air, where he might breathe more freely.” — from Helen Cody Wetmore. Last of the Great Scouts: The Life Story of William F. Cody. 1899.

Video about the modern incarnation of Delmonicos, run by “Ocinomled.”

Free e-book: Delmonico’s, A century of splendor. (link valid as of summer 2019) 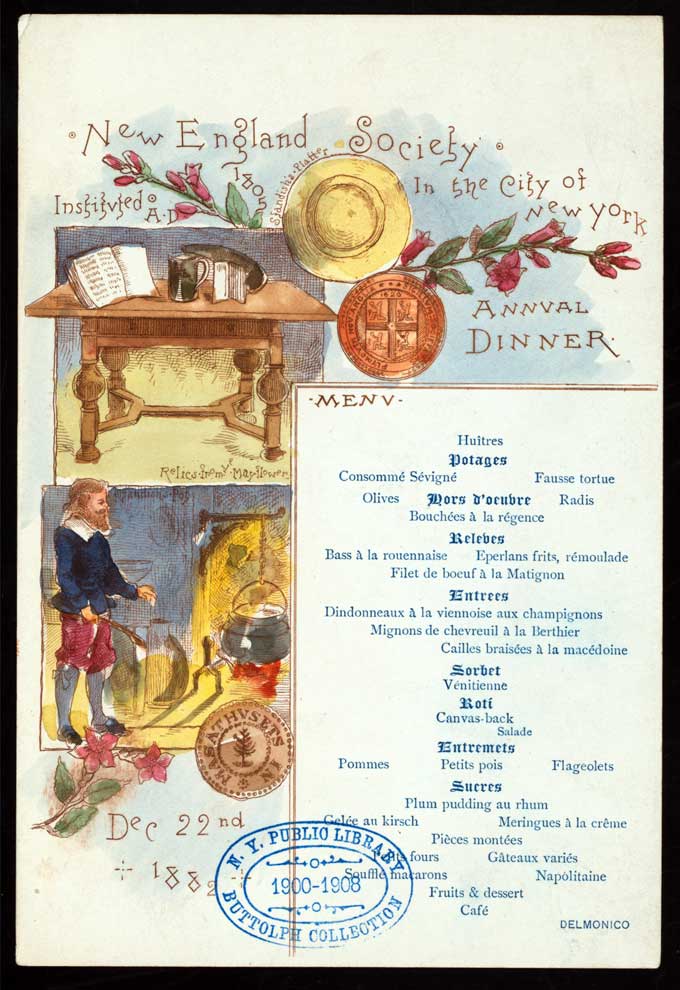 This web site generates income from affiliated links and ads at no cost to you to fund continued research · Information on this site is Copyright © 2023· Feel free to cite correctly, but copying whole pages for your website is content theft and will be DCMA'd.
Tagged With: Alessandro Filippini, American Food, Delmonico's Restaurant, Swiss Food