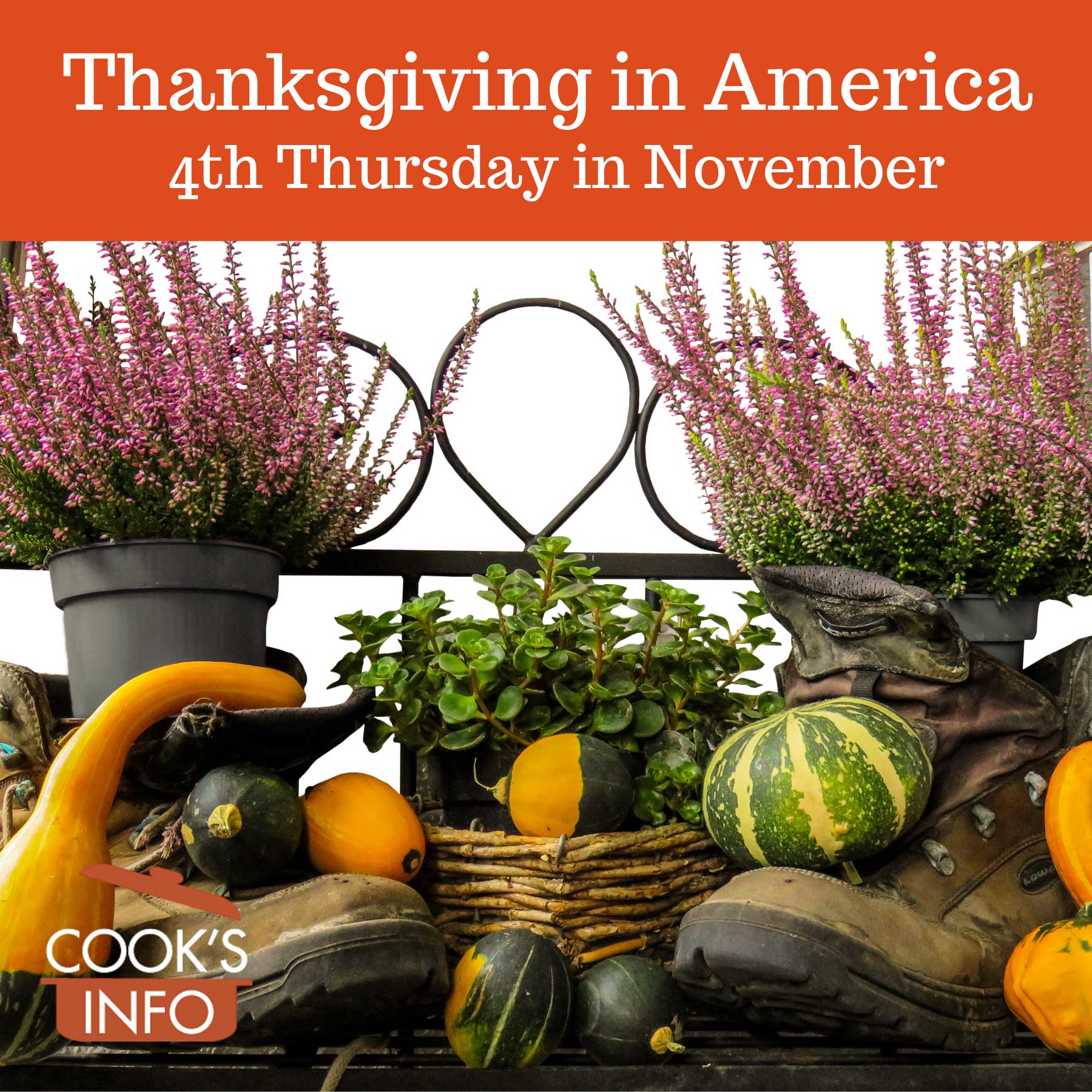 American Thanksgiving falls on the fourth Thursday of November.

Turkey is the traditional meat served.

Though many people who are weary of turkey every year for Thanksgiving try to persuade their family to accept something else for a change, it’s very hard to change what people expect.

The stuffing for the turkey might be oyster-based in New England, made of cornbread in the American south, or have wild rice in it in more northern states. 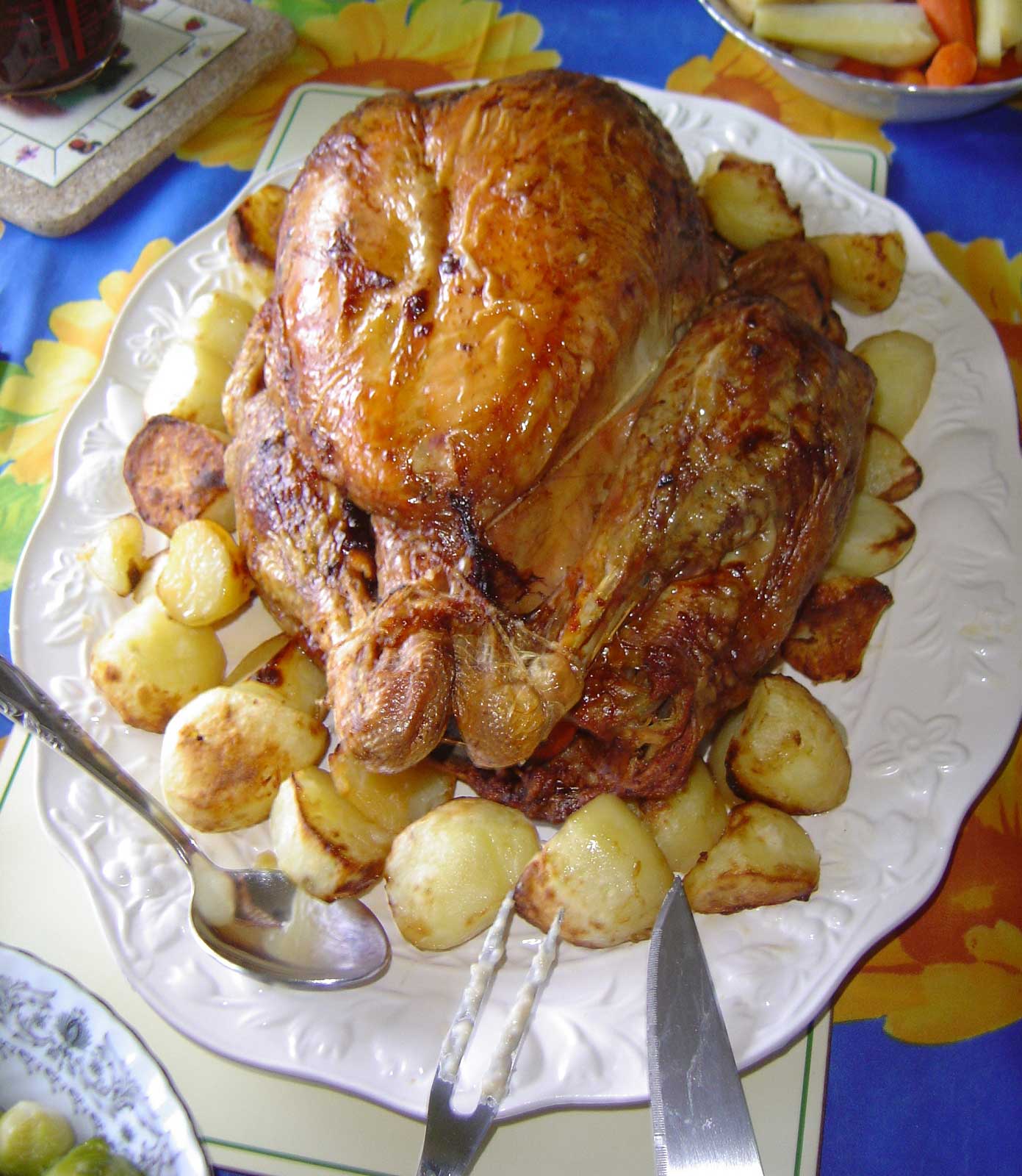 Typical side dishes include green bean casserole with canned mushroom soup, and sweet potato casserole topped with marshmallows. Both of these recipes were created by companies to promote products. The sweet potato with marshmallow first appeared in 1917 and took off in popularity in the 1920s. [1]”In 1917, the marketers of Angelus Marshmallows hired Janet McKenzie Hill, founder of the Boston Cooking School Magazine, to develop recipes for a booklet designed to encourage home cooks to embrace the candy as an everyday ingredient.” — Saveur Magazine, Oct. 2011 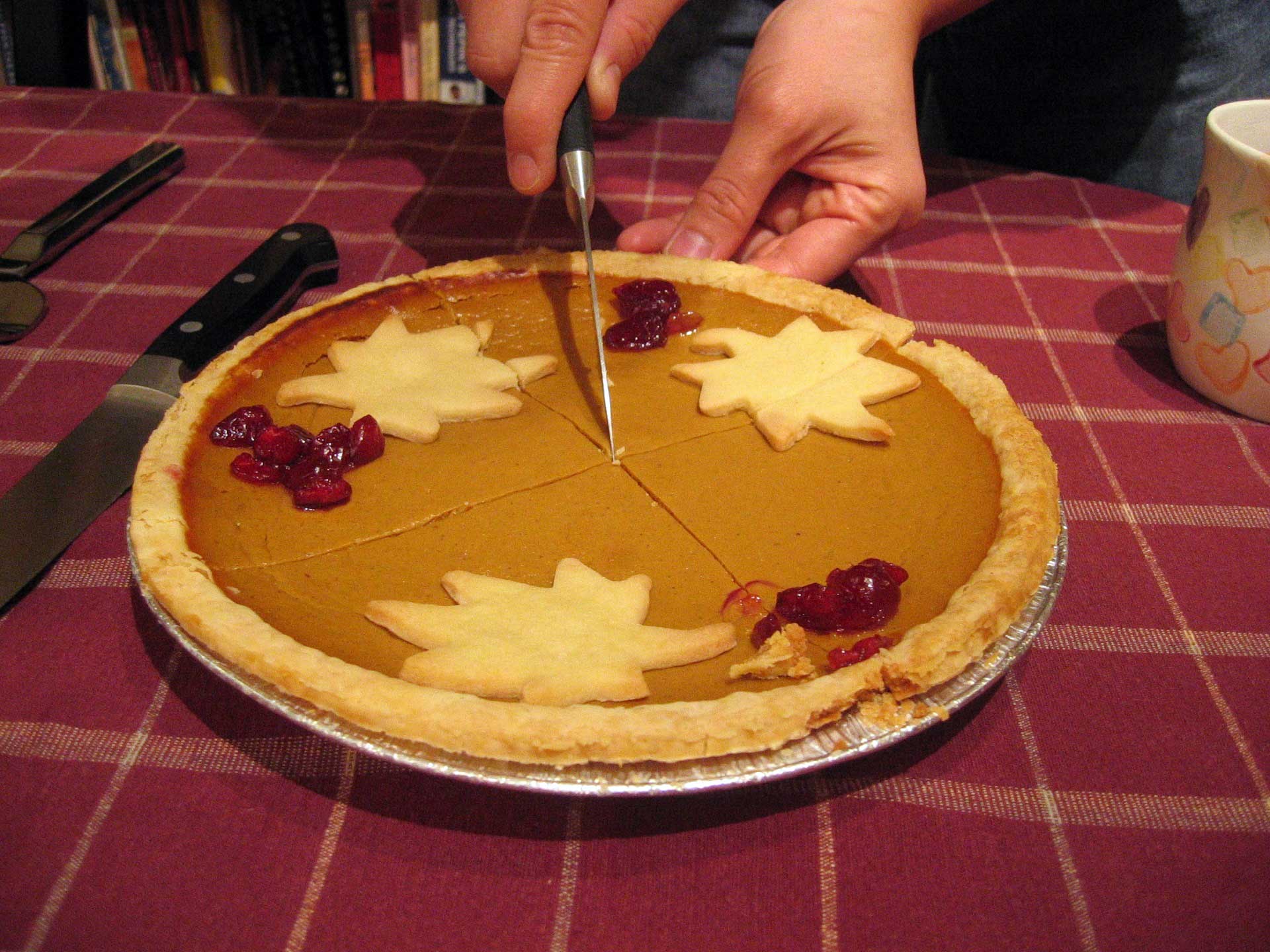 Thanksgiving dessert traditionally includes pumpkin pie with whipped cream (which is often aerosol cream). Additional pies and desserts may be served as well.

One dessert that was associated with Thanksgiving for longer than pumpkin pie has been has now been largely been forgotten — Marlborough Pudding.

An American food writer, Clementine Paddleford, said she could tell what part of the U.S. you came from based on what your choice of pies for Thanksgiving would be.

The Ancient Greeks had fall harvest festivals, as did the Romans. The Roman one was called “Cerelia” and was dedicated to the goddess, Ceres.

The “Horn of Plenty” symbol dates back to Greece. In the myth, Amalthea is given a goat’s horn by Zeus. Zeus said that the horn will fill with anything she wished.

British settlers had held services of Thanksgiving in the New World at different times of the year, starting in Newfoundland on 27 May 1578. Popular imagination holds, however, to the one held by Pilgrims in 1621 one year after their landing in 1620. They didn’t hold another one, though, until 1623, and that was on the 30th of June. 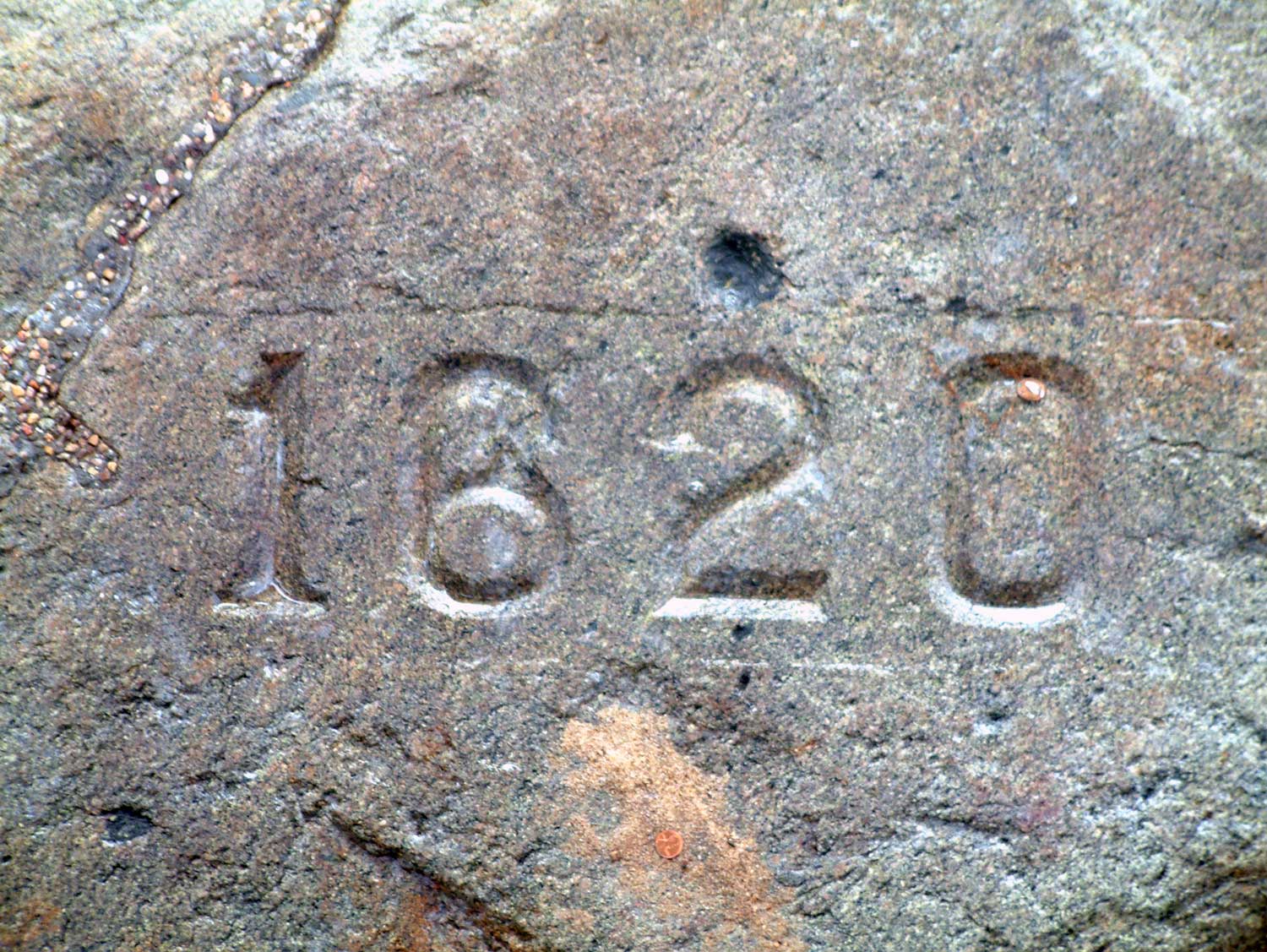 Over the next 150 years, Thanksgivings were held in America at irregular intervals and times, though most tended to coincide with harvests.

No further Thanksgivings were held for almost 50 years in the U.S. until on the 3rd of October 1863 American President Lincoln proclaimed a Thanksgiving to be held on the fourth Thursday in that upcoming November. He was urged to do so by a woman named Sarah Josepha Buell Hale (1788–1879), who would also edit the first American edition of Eliza Acton‘s “Modern Cookery for Private Families”.

“As we prepare for the extravagant feast that signifies American Thanksgiving, we would do well to remember the holiday’s unusual origins. This National holiday was the brainchild of Sarah Josepha Hale, the editor of Godey’s Lady’s Book magazine, who campaigned for it tirelessly. Between 1846 and 1863 she lobbied all who would listen—seven presidents, endless congressmen, the governors of all the states—to have the last Thursday in November declared a day of a National thanksgiving, an act she believed would help heal the country’s profound social and political rifts. Her efforts finally succeeded. In 1863, in the middle of the Great American Rift, President Abraham Lincoln made Thanksgiving Day official. Beyond the mythology that surrounds the holiday (the happy feast shared by Pilgrims and Native Americans; the big-breasted turkeys), we have to admire Hale’s intentions. She campaigned for community and the common good. She genuinely believed in fostering unity for the betterment of the nation.” — Goldstein, Darra. National Turkey Day. Gastronomica Magazine. 3 November 2011. Accessed December 2021 at https://gastronomica.org/2011/11/03/national-turkey-day/

From 1863 to 1941, whoever was President that year had to issue an executive order to make Thanksgiving a holiday that year.

Urban myth holds that in the 1920s, American President Calvin Coolidge and his wife Grace were hosting a Thanksgiving dinner in their home in Northhampton, Massachusetts. While the maid was carrying the turkey into the dining room to present to the assembled guests, she slipped and dropped the turkey to the floor. Grace Coolidge said to her maid, “That’s alright Mary, just take this turkey back to the kitchen and bring in the other one.”

In 1939 and in 1940, President Franklin D. Roosevelt proclaimed it to be the third Thursday, in order to create an extra “shopping week” between Thanksgiving and Christmas. But changing the timing of it was so unpopular that in 1941, Congress finally passed a proclamation making Thanksgiving a holiday in perpetuity, and declaring it to be the fourth Thursday.

In New England, Thanksgiving used to be a popular and traditional time for weddings.

“At 9 a.m. on the sunlit morning of November 27, 1924, Macy’s gave the children of New York a particularly special Thanksgiving treat as a police escort led the start of the parade from the intersection of 145th Street and Convent Avenue. The early-morning start time of “Macy’s Christmas Parade” overlapped with many church services, but it gave spectators plenty of time to make it to the afternoon’s big football game between Syracuse and Columbia universities at the Polo Grounds… The spectators who stood four and five people deep, however, could watch it all in just a matter of minutes since the modest street pageant stretched the length of only two city blocks.” [2]Klein, Christopher. The First Macy’s Thanksgiving Day Parade. History.com. 26 November 2014. Accessed October 2021 at https://www.history.com/news/the-first-macys-thanksgiving-day-parade 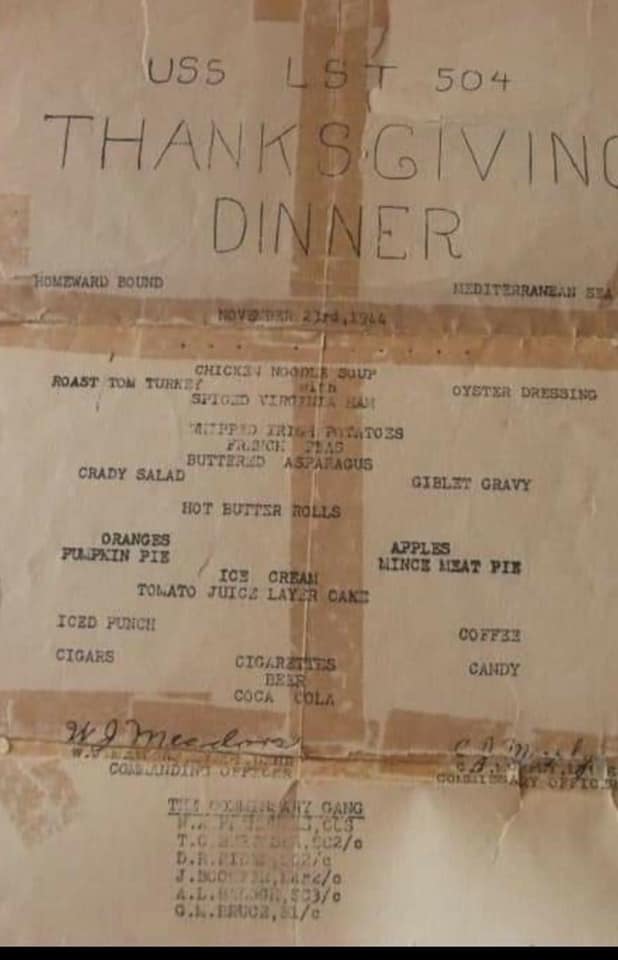 A Boy’s Thanksgiving Day
Over the river, and through the wood,
to Grandfather’s house we go;
the horse knows the way to carry the sleigh
through the white and drifted snow.

Over the river, and through the wood,
to Grandfather’s house away!
We would not stop for doll or top,
for ’tis Thanksgiving Day.

Over the river, and through the wood –
when Grandmother sees us come,
She will say, “o, dear, the children are here,
bring a pie for every one.”

“Again Johnny Doughboy has first call on the drumsticks. When Thanksgiving Day dawns, the ambrosial odors of roasting turkey and mashed potatoes and gravy will rise from camp kitchens round the world. Less turkey for civilians, one-quarter pound less a person than we had last winter, when it was three pounds apiece. This year it will be half a drumstick less for the plate. But listen where the missing bit’s going. Prisoners of war are to have turkey for Christmas dinner—last year it was chicken.

The cranberry crop is the shortest since 1921, or 53 million pounds, 16 million less than last season. At least a third of this will be going to the military. Oysters are on the skimpy side, but a few more than last autumn. There they lie in their beds, fat and willing, but there’s not enough labor to tong and pack the crop.

Otherwise, the great-day feast is the usual bounty, war or no war. Pass the mashed potatoes piled in a high, light drift. Help yourself to yams candied in their own rich blood. There are large supplies of potatoes, both the white and the gold. No onion famine this winter —onion crops are breaking records. Mash the purple-tinted turnip. Serve the parsnip of sweet, earthy taste. Native squash is here to celebrate the day in proper manner.” — Paddleford, Clementine (1898 – 1967). Food Flashes Column. Gourmet Magazine. November 1944.

“The funny thing about Thanksgiving, or any huge meal, is that you spend 12 hours shopping for it and then chopping and cooking and braising and blanching. Then it takes 20 minutes to eat it and everybody sort of sits around in a food coma, and then it takes four hours to clean it up.” — Ted Allen.