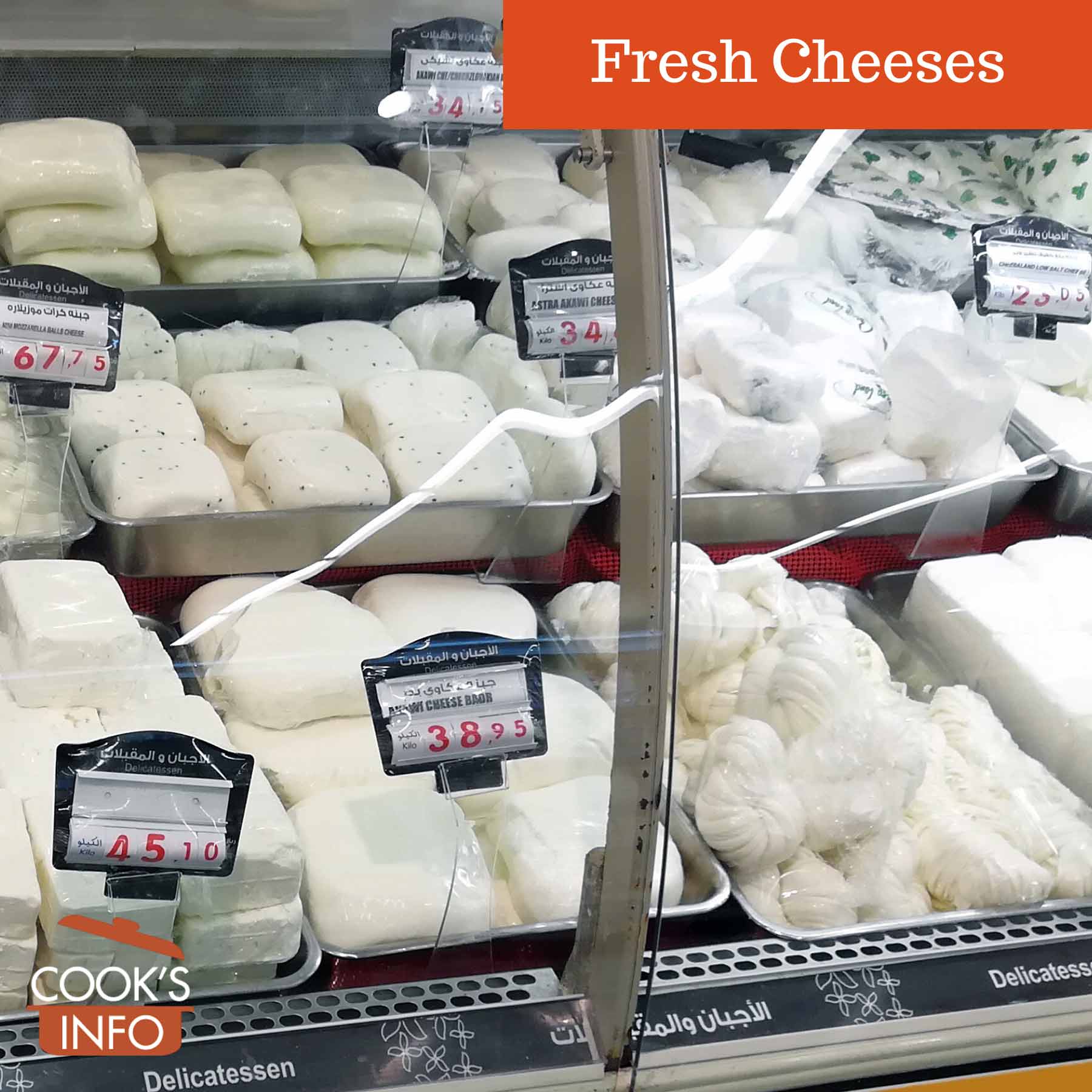 Fresh cheeses can be categorized as a sub-group of soft cheeses.

They are soft, spreadable, usually white, and mild in taste though typically a bit tart.

Fresh cheeses are ready to eat the same day as the cheese-making process is finished. They are not aged, fermented or pickled.

Some food writers erroneously classify a cheese such as feta as a fresh cheese because it has the soft and white characteristics of this grouping of cheeses. But it is not technically a fresh cheese owing to its being aged and essentially pickled in brine.

The high moisture content can make fresh cheese an ingredient that gives both body and tenderness to a dish:

Because they were not designed for aging, fresh cheeses typically have short storage lives. They can be frozen to extend the storage life, though for some fresh cheeses the freezing process can have undesirable impacts on the texture of the product after thawing, such as graininess.

Most Roman cheeses were fresh cheeses.

Ayib is a soft Ethiopian fresh cheese similar to cottage cheese. At meals, it acts as a simple, cooling foil to many of the complex and sometimes fiery tastes in Ethiopian cuisine. It is usually made at home or through farmhouse production. Like... 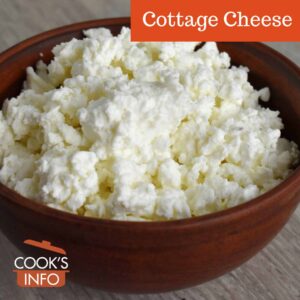 Cottage cheese is an unaged, "fresh" soft white curd-type cheese made from skim milk. It can be eaten as is, or seasoned or flavoured, or used as an ingredient in cooking. 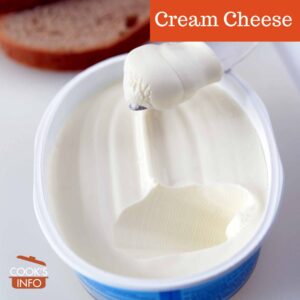 Cream cheese is a smooth, spreadable, unripened cheese that tastes mildly tangy. The standard cream cheese is white and unflavoured, though many different colours and flavours are now available. 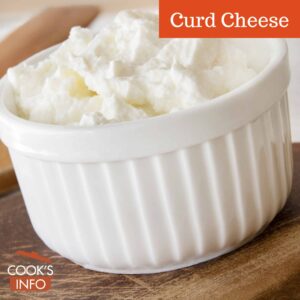 Curd cheese is an English fresh cheese made from skim milk. It has a slight sour tang to the taste, and is not aged at all. It is often used as an ingredient in baking. 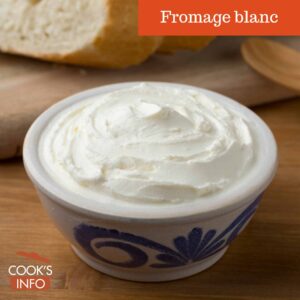 Fromage blanc is a fresh cheese that looks and spreads somewhat like cream cheese. You can use it as is, drain it a bit, or whisk it smooth. It can be used as a topping, as an ingredient in cooking, or be eaten on its own with some sugar. 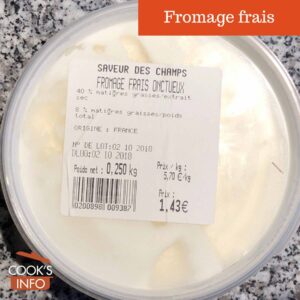 Fromage frais is a fresh cheese that looks like Greek yoghurt and has the same spoonable texture. You can get fromage frais plain or flavoured, often flavoured with herbs to use as a spread for bread. 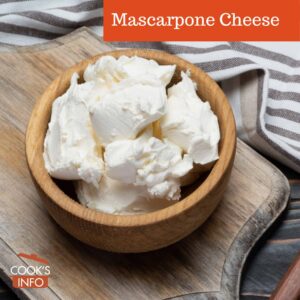 Mascarpone is a pale cream-coloured soft, spreadable cream cheese made from cream from cow's milk. It's made using citric acid. It has a light taste with a slight tang, and a rich, silky texture. It makes very rich sauces. 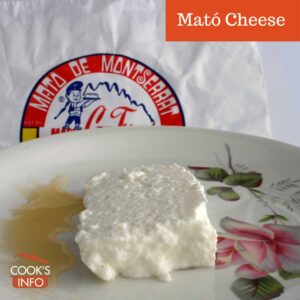 Mató is an unsalted fresh Spanish cheese, meant to be eaten the same day that it is made. It can be made from goat's milk or cow's milk. 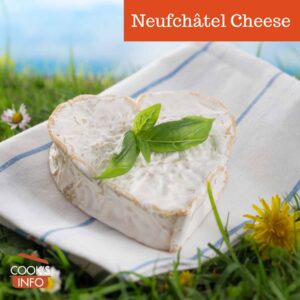 Neufchâtel is a soft, spreadable cheese made from whole milk that is somewhat like a cross between cream cheese and Brie. It has a slight tang to its taste, and is often made in a heart-shape. 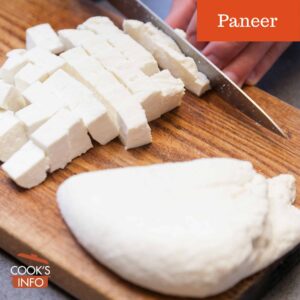 Paneer is a soft, fresh white cheese made in India. It does not melt, but rather will brown when cooked. It has a bland flavour but it absorbs other flavours well. 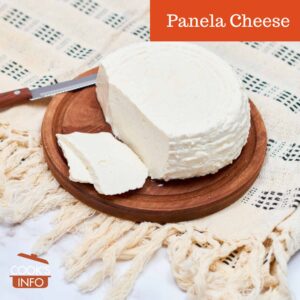 Panela is a fresh, Mexican cheese made from pasteurized cow's milk. It is white with a mild taste. The texture is creamy and soft, somewhat spongy. The cheese has no rind. 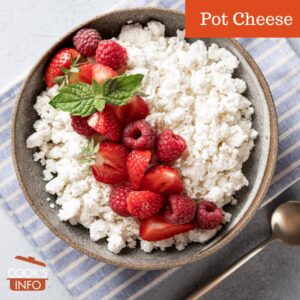 Pot Cheese is a soft, fresh cheese. It is basically a higher-fat, slightly salty pressed dry cottage cheese with large curds, sold in small tubs or pots. It has a neutral taste. 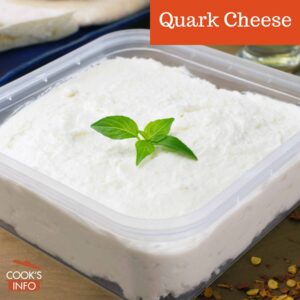 Quark is a soft, unripened white cheese that usually comes in tubs or vacu-packs. The curds are usually homogenized so that it is smooth and looks like sour cream, though some styles leave the curds intact. The cheese has a tang similar to sour cream... 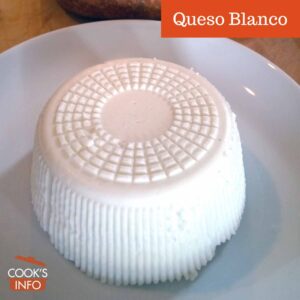 Queso Blanco is a fresh Mexican cheese made from skim cow's milk. The cheese is white, creamy, and crumbly. It doesn't melt when heated. 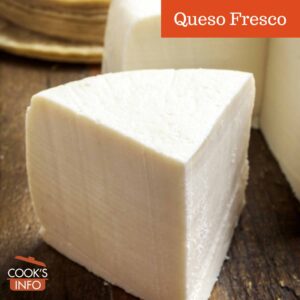 Queso Fresco is a soft, crumbly Mexican fresh cheese. Crumble over dishes, or use as a cheese to stuff things with. It softens when heated but doesn't melt. 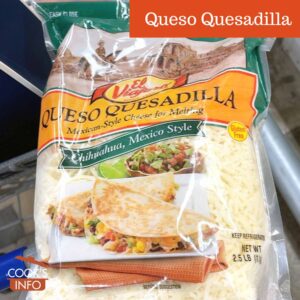 Queso Quesadilla is a smooth, white and creamy cheese made from cow's milk. It melts very well, making it very popular in quesadillas, and thus its name. 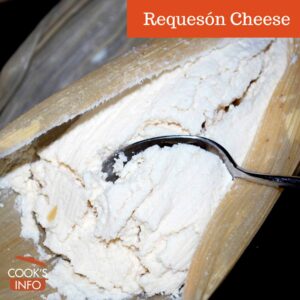 Requesón is a Mexican fresh cheese. It is white and lumpy, with a creamy and slightly tart, slightly salty taste. It is good for stuffing food such as enchiladas with. 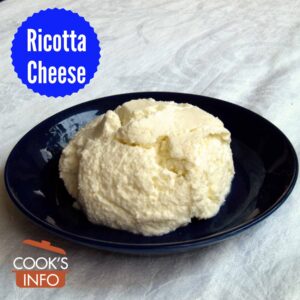 Ricotta cheese is a soft fresh cheese. It is frequently used as an ingredient in dishes, for instance savoury pies, or when stuffing pasta.

Zufi Cheese is a type of ricotta. It is made in Val Formazza, on the Italian / Swiss border, during the summer, while the cows are at pasture. Cow's milk is heated, then taken off the heat. It is added to milk that's just been freshly milked from...