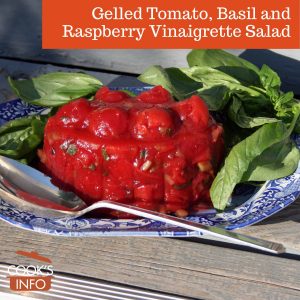 This is a wonderful chilled salad to go with meat dishes such as pork or beef, or as part of a summer salad or barbeque plate. It tastes only slightly sweet, and is like a retro version of tomatoes and basil with a raspberry vinaigrette. It has great flavour. You can make this a day (or several days) ahead. It's also very healthy.
Print Recipe Pin Recipe
Prep Time 20 mins
Cook Time 5 mins
Total Time 25 mins
Course Make-Ahead, Salads, Skinny Food

In season, it is nice to use fresh basil instead of dried. Use about 1/3 cup lightly packed (5 g) of chopped, fresh basil leaves, and add them when you add the celery. You could also use home-stewed diced tomatoes. If you don't have a suitable gelled salad mould, use a bowl that will hold about 2 cups (500 ml.) We used a commercial salt substitute instead of salt in order to lower the added sodium; we also used sodium-free canned tomatoes.
Tried this recipe?Let us know how it was!
Previous Post: « English Muffins
Next Post: Artichoke, Mushroom and and Beef Burritos »
Tagged With: Gelatin, Salads