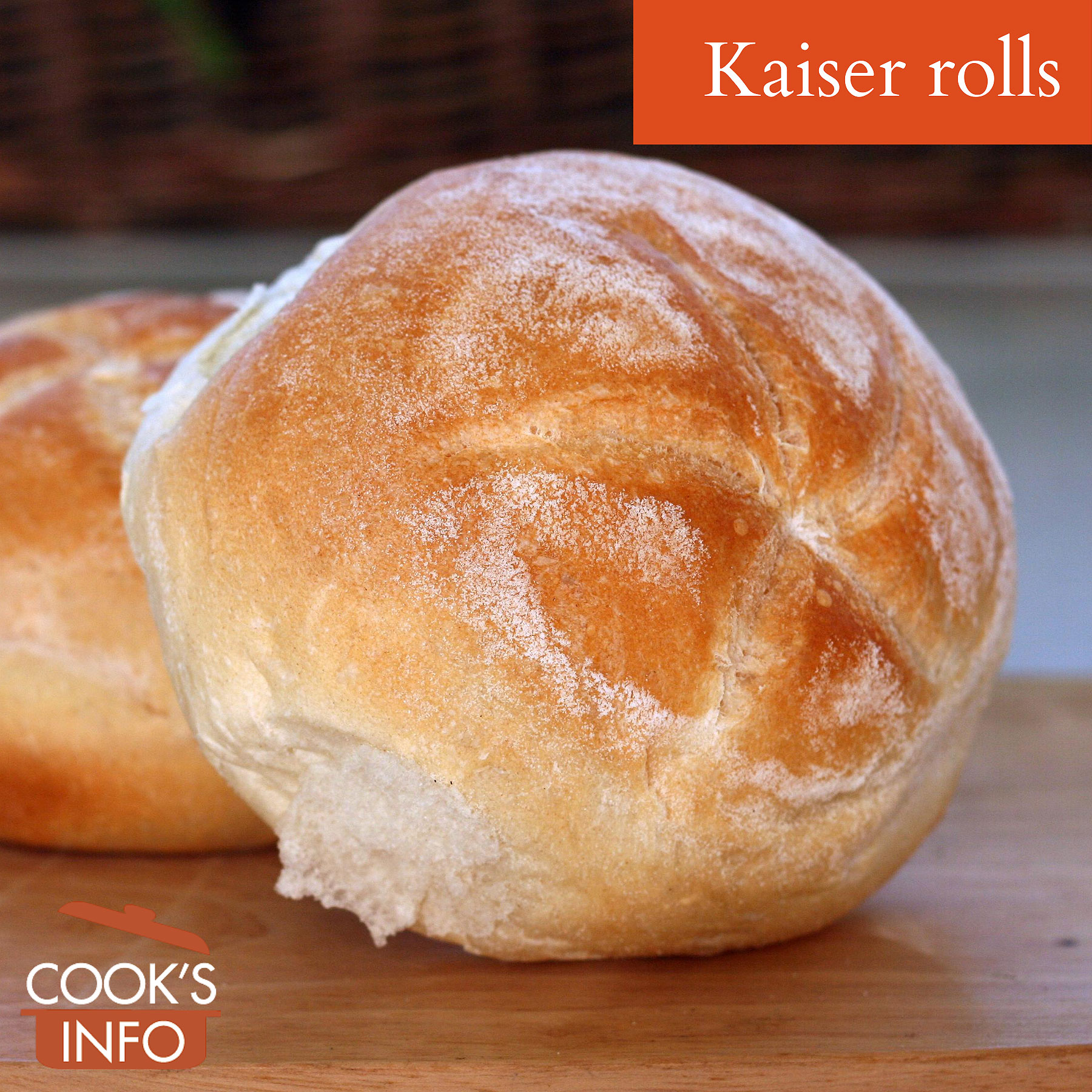 They are large and round, crisp on the outside, and soft on the inside,

Sometimes their tops will also be sprinkled with poppy seeds, sesame seeds or chopped fried onion.

To make them, you divide the dough into pieces, and roll each piece out into 15 or 17 ½ cm rounds (6 or 7 inches). Then, you fold one edge of a round towards its middle, then make four more similar folds, tucking the last one under the first one. Then you press them all down firmly. You then turn them over to let the dough do its final rise, then flip them to design side up just before baking them.

It can be hard to get the into an exact circle, but it needs to be a pretty good circle, or the folds will look untidy. It takes practice before yours stop looking rumpled, or the folds partly unfurl and your rolls look like run-over starfish.

This video shows how Kaiser rolls are shaped:

You can also cheat by buying Kaiser roll stamps that will impress the design on top. If you are using such a stamp, you have to get the knack of how much to press down. If you press too far down into the dough, the design will separate as it rises and bakes and end up looking like a flower; if you press too lightly, the design will just disappear as the dough rises. Even when using a stamp, you still turn them over as they rise, then flip them to design side up just before baking them.

Still other people attempt to get the look by just slitting the tops crisscross with a sharp knife.

You make the crust hard by either brushing the rolls with an egg wash just before baking, or putting a pan of boiling water in the oven, or by spritzing them with water two or three times while baking

Hard rolls are a version of Kaiser rolls made in New York State with an even crispier crust. They were renamed “hard rolls” during the First World War against Germany and its Kaiser, and the name stuck.

Kaiser rolls can be used for sandwiches; you slice them horizontally.

The popular belief amongst some food writers is that Kaiser rolls were invented in 1487 when Frederick III, the Holy Roman Emperor at the time, ordered his image stamped on them. This can’t be verified. In fact, there are just as many claims that what he ordered was “4,000 gingerbread cookies” for distribution to children — if it happened at all.

Sometimes called a “bulkie” in parts of Boston.

Some people use “Vienna roll” as a synonym for Kaiser roll. However, a Vienna roll is actually a distinct bread roll, and some legislatures such as Oregon State even mention them as separate items in various food codes:

“(2b) As used in this subsection, “rolls” or “buns” include doughnuts, sweet rolls or sweet buns made with fillings or coatings, such as cinnamon, the soft rolls, such as Parker House rolls, hamburger buns, hot dog buns and the hard rolls, such as Vienna rolls or Kaiser rolls. However, rolls or buns shall not include foods made with specialty flours, such as cake flour.” [1]Oregon State Statutes  625.212 Definitions for ORS 625.215.

This web site generates income from affiliated links and ads at no cost to you to fund continued research · Information on this site is Copyright © 2022· Feel free to cite correctly, but copying whole pages for your website is content theft and will be DCMA'd.
Tagged With: Yeast Breads