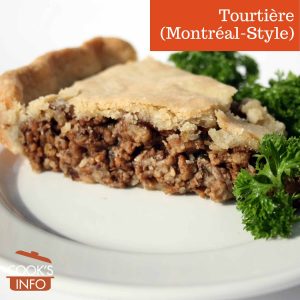 This is a *very* moist tourtiere; especially a treat if you splurge and use butter in the crust. Granted, it is not a traditional tourtiere, especially with the celery, mushroom and bread crumbs -- thus, we call it Montreal-style. But we wanted one that was a bit richer tasting, and one that avoided the dryness that afflicts so many tourtiere recipes, even the beloved family ones that -- let's face it, can be so dry that everyone has to drown them in ketchup just to be able to choke them down.
Print Recipe Pin Recipe
Cook Time 45 mins
Total Time 45 mins
Cooking Temperature 180 C / 350 F / Gas Mark 4
Course Pork
Servings 8 slices

Instead of shortening in the crust, you can use butter for a richer crust. For the celery, you'll want about 3 medium stalks. For the mushrooms, you'll want about 4 large handfuls of button mushrooms. Instead of sage, you can use summer savoury. For the stock, you can use beef or vegetable. Instead of bread crumb, you can use 150 g of grated potato (1 cup / 5 oz / 1 medium potato) -- just add it earlier in the recipe at the start of the simmering period.
Tried this recipe?Let us know how it was!
Previous Post: « Grilled Eggplant with Parmesan
Next Post: Tuna Cashew Pasta Salad »
Tagged With: Pork, Québecois