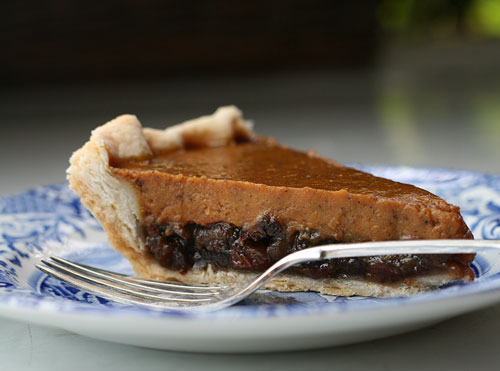 CooksInfo
This is a luxurious combination of two of the best tastes from two favourite holidays, Thanksgiving and Christmas. The smoothness of the pumpkin custard acts as the perfect foil to the richness of the mincemeat. And it's very easy to make -- just a frozen pie crust, a can of ready-to-use pumpkin pie filling, and mincemeat out of a jar. It's sometimes referred to as, "Mincemeat and Pumpkin Layer Pie."
Print Recipe
Prep Time 20 mins
Cook Time 1 hr
Total Time 1 hr 20 mins
Course Desserts and Sweets
Servings 8

Pumpkin and Mincemeat Pie© Denzil Green For the pie crust, you can use a purchased frozen pie crust, or if you prefer, make your own. For the pumpkin, find the directions on the can for making enough filling for one pie -- and then cut all those amounts in half. The reason is because we're going to be taking up half the pie pan's capacity with the mincemeat, so we just need half the pumpkin filling. You may of course choose to double the recipe and make 2 pies at once; if so, make up the pumpkin filling as though you were doing 1 whole pie.
Tried this recipe?Let us know how it was!

We estimate about 64 Weight Watchers PointsPlus® points in total in the recipe, which will vary based on what brands of ingredients are used. (We cut back a bit the sugar called for in the pumpkin filling.)