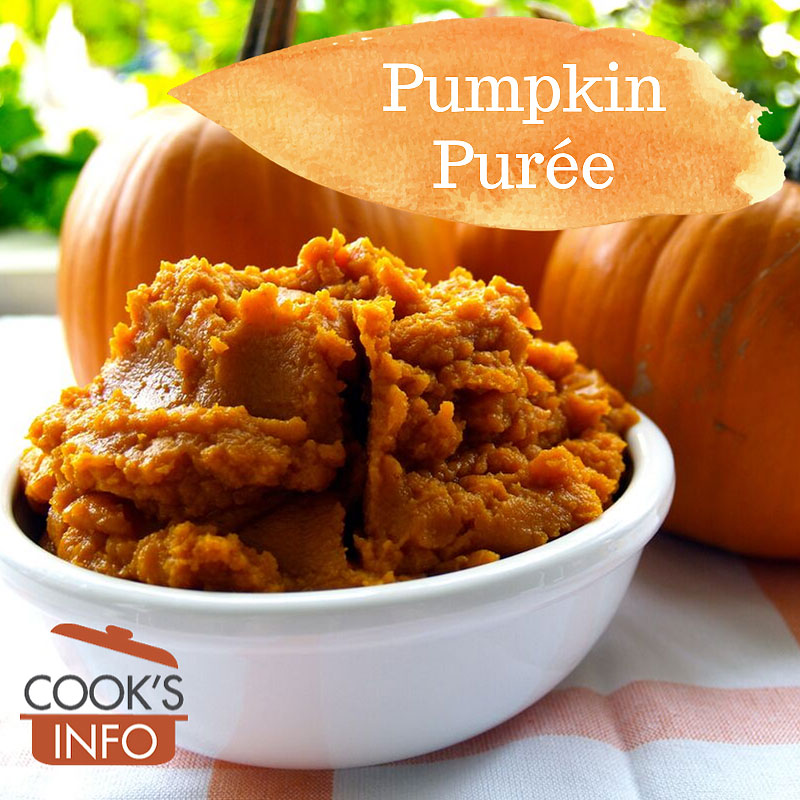 Pumpkin purée is the technical term for what most of us just call “canned pumpkin.” It is frequently used in North America as the basis for pumpkin pie.

What is pumpkin purée aka canned pumpkin

Canned pumpkin is pumpkin that has been cooked by steaming, strained through filters to remove rind and seeds, mashed smoothly, and then preserved by the canning process.

Nadia Arumugam, a food columnist for Forbes and Slate magazines, describes the processing:

After the whole pumpkins are washed and disinfected in the factory setting, they are de-stemmed and chopped into pieces by mechanical cutters. Powerful jets of water knock out seeds and stringy pulp which drop out through small perforations at the base of the machines. The pumpkin pieces then pass into metal baskets or boxes and are steamed under high pressure or they are carried through a continuous belt while being subjected to constants blasts of steam. They could also be cooked in “wilting towers;” tall cylindrical units much like silos. The pumpkin pieces are fed into openings at the top of the towers and as they travel down they are steamed.

Much like pumpkin that has been baked or steamed in the domestic kitchen, commercially wilted pumpkin is also water-logged. Much of the liquid is naturally occurring squash juice, but some of it is condensed steam. While there are some techniques home cooks can use to dry out soggy squash they are time consuming (see below) and the results not always consistent. Processors push the cooked pumpkin through strong adjustable presses to squeeze out the excess liquid until the mixture reaches a specific moisture content. The pressed pumpkin now passes through a pulper to remove  bits of skin, fibers, seeds and other hard particles and to begin the mashing process. Once broken down, the pumpkin goes to the finisher, a kind of industrial strength food mill to be ground into the smooth puree you find in cans and to remove any finer bits of extraneous material.” [1]Arumugam, Nadia. Why You Want Canned Pumpkin For A Better Pie, Not Fresh. Forbes Magazine. 19 November 2013.

Some brands of canned pumpkin may also contain squash, but that’s not a problem — pumpkin is a squash (see language notes below.) Canned pumpkin is on the shelf of every grocery store in North America, and is usually less than the price of a real pumpkin.

That maybe, however, be only true for North America. It may be much harder, or more expensive, to find canned pumpkin in the UK, Australia, New Zealand, etc.

If you’re making pies, canned pumpkin may be the way to go if you’re not an experienced hand, as they will help you avoid getting a watery pie. Even dab hands often prefer to use canned pumpkin. See here for the classic Libby’s Pumpkin Pie Recipe that uses canned pumpkin.

To make your own pumpkin purée: Wash pumpkin to remove any dirt. Cut pumpkin into large chunks (don’t bother peeling) and remove seeds. Steam for about ½ hour or until tender — poke with a fork to check for the same level of tenderness that you would when boiling potatoes. Drain in a colander, and let cool.

Some people advocate that roasting is a better method than steaming. “Roast the pumpkin in a hot 215 C / 420 F oven so that the dry heat evaporates as much of the liquid from the cut surfaces as possible.” [4]Ibid.

Sometimes home cooked pumpkin purée can be runny: if you’ve had this happen to you before, and want to avoid it again, at this stage, put the cooked pumpkin chunks in a colander resting in a large bowl, cover all with plastic wrap, and set in refrigerator overnight to drain.

Scrape the cooked pumpkin off from the skin with a large metal spoon and discard the skin. Put the pumpkin into a blender (or food processor) and purée until smooth, or mash with a potato masher.

Nadia Arumugam recommends one further step to evaporate more moisture out. She writes, “Cook the puree in a heavy-base saucepan over very low heat, stirring, until thickened and browned. The puree also benefits from caramelization which gives it a sweeter note.” [5]Ibid.

You can also make purée from other squash in the same manner. The best versions combine pumpkin with some other squash.

Even if you are in a hurry, always cool your homemade purée before using it in pumpkin pies. 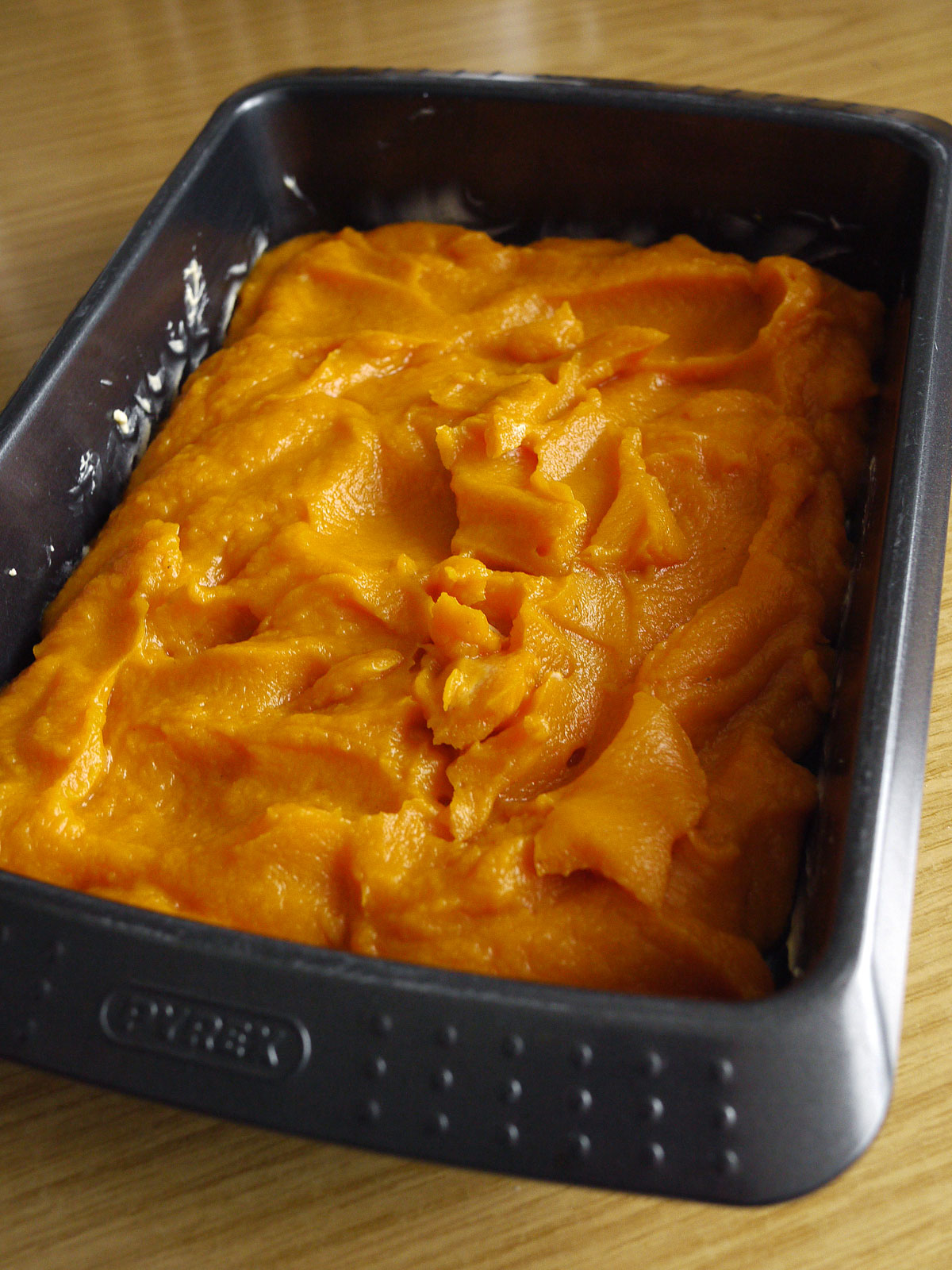 Store opened canned pumpkin in the fridge for up to 5 days, or freeze in ziplock bags or air tight containers; mark on each how much purée there is so you will know when you go to use it. You may wish to freeze it in 1 cup / 8 oz / 225 g portions.

The E.D. Smith company recommends a frozen storage life of up to 3 months for its frozen pumpkin purée.  [6]”Once opened, our Pure Pumpkin can be frozen in an air tight container for up to three months.” E.D. Smith company website. Accessed January 2021 at https://www.edsmith.com/en/products/pure-pumpkin/

The United States Department of Agriculture (USDA) used to give procedures for home canning of pumpkin purée, but since 1989 they have withdrawn those guidelines and now recommend against it. They recommend now the following: either pressure can peeled pumpkin in cubes and mash upon use, or, freeze pumpkin purée. The reason is heat penetration to sterilize the food. Previous older directions to home can as purée were found to provide insufficient heat penetration to guarantee the pumpkin purée being free of live botulism spores. Canning pumpkin as cubes does provide sufficient heat penetration.

“Thanks to canned pumpkin,’ says Mrs. Ames “you can easily and quickly make up a pie any time you want a good dessert to impress your company or delight your family. Also,” she adds, “you can give your pie extra allure and flavor by topping it with glistening orange marmalade and snowy meringue.

“The modern homemaker is mighty lucky to be able to rely on canned pumpkin, for, in olden times, pumpkin pie was a seasonal delicacy that required long hours of preparation. Big, yellow pumpkins, grown in corn field and ripened ‘neath the harvest moon, were stored in vegetable cellars at the first sign of frost to await the cook’s pleasure. Long before the pie crust was rolled, the pumpkin had to be peeled, cubed, carefully cooked, and sieved – a tedious process that meant hours of extra labor. And, since the pumpkins wouldn’t keep indefinitely, the cook had to cram her pumpkin pie baking into a relatively short season.

“But now, it’s easy to bake a pumpkin pie, and to do it clear around the calendar. You just need a can of pumpkin and a reliable can opener.”

Pumpkin purée is sometimes referred to as “mashed pumpkin” or “pumpkin pulp” — though growers use “pulp” to refer to the non-solid, stringy bits in the centre of a pumpkin surrounding the seeds.

As far as we know, it’s only the English language which attempts to make a distinction between pumpkin and squash, and that is based primarily on colour and shape, not genetics. And that distinction is relatively recent, historically. A writer for the Atlantic magazine noted: “Cindy Ott, who wrote Pumpkin: The Curious History of an American Icon, told me that, up until the 19th century, the words pumpkin and squash were used interchangeably.” [7]Gutman, Rachel. The Great Pumpkin-Pie Conspiracy. Washington, D.C. The Atlantic. 30 October 2017. 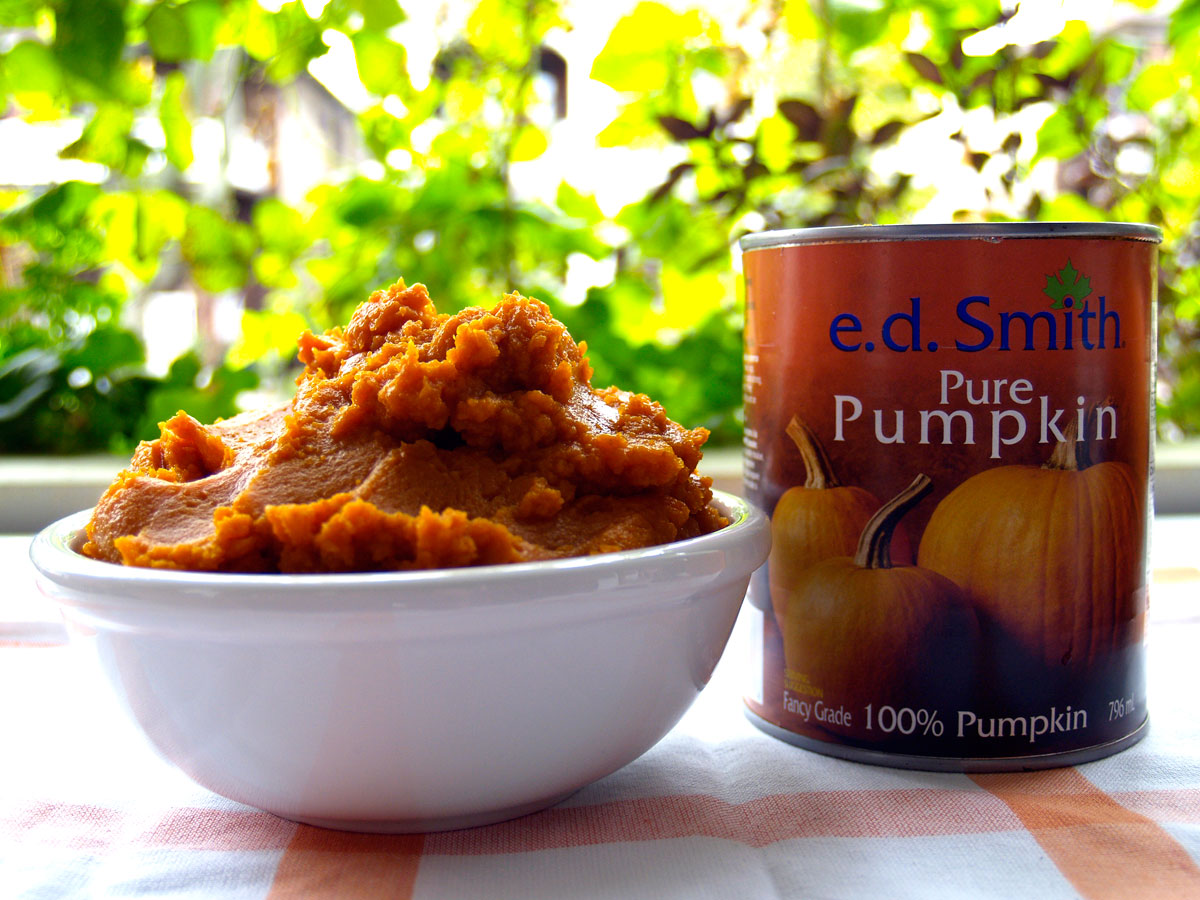 This web site generates income from affiliated links and ads at no cost to you to fund continued research · Information on this site is Copyright © 2022· Feel free to cite correctly, but copying whole pages for your website is content theft and will be DCMA'd.
Tagged With: Pies & Tarts, Pumpkins, Squash