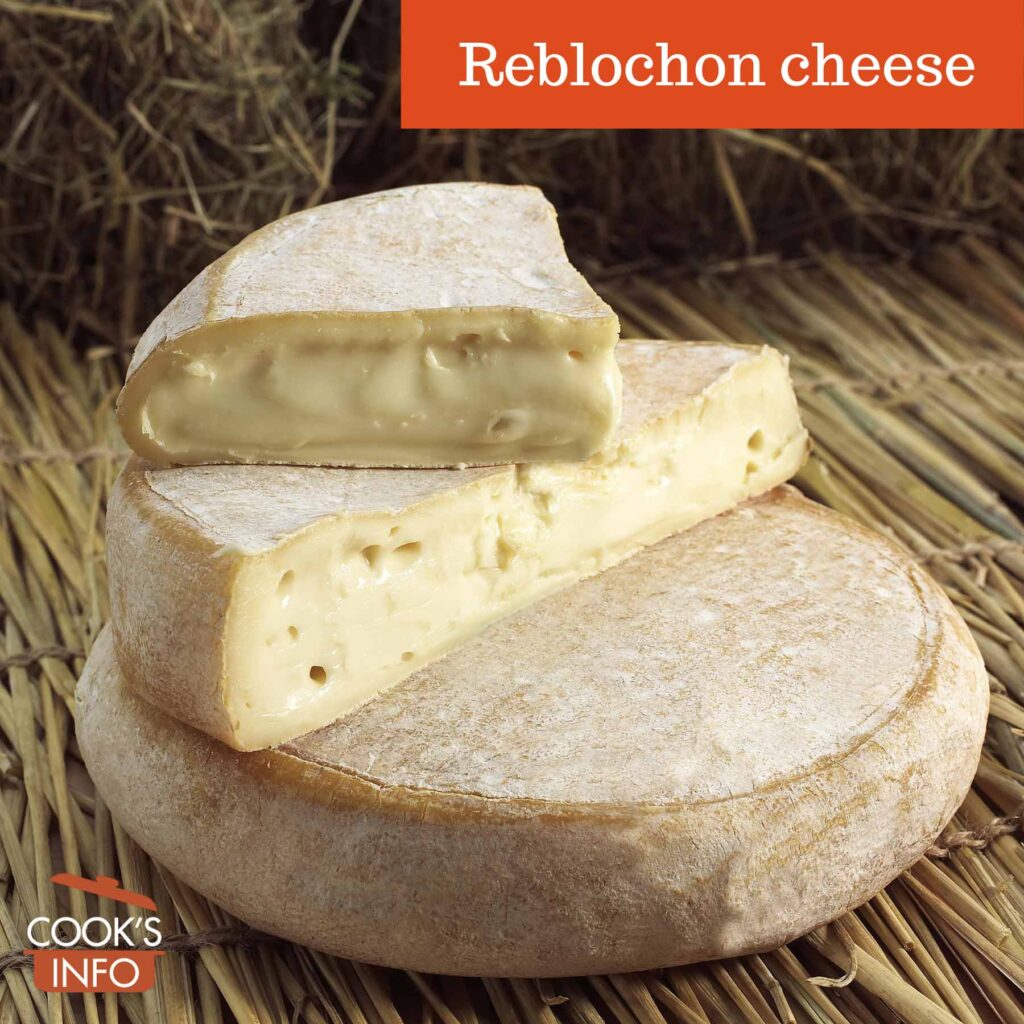 Reblochon cheese is a soft, washed-rind cheese with a mild taste.

Its light beige to orangey-yellow rind, which is edible, has white mould on it. The surface texture of the rind comes from the cheesecloth used during making the cheese.

It is made and sold under many different brands.

Reblochon is made in the Thônes and Maurienne valleys in Savoie, France. Whole, raw cow’s milk is used, coming from the breeds of cows known as Abondance, Montbéliarde or Tarine.

To make reblochon cheese the milk is warmed in a huge copper pot, then rennet is added to curdle it. The curd is cut, then raked till it is just the size of grains of rice. The curd is poured into moulds lined with cheesecloth that allows the whey to drain off (the whey is used to make whey butter.) The curd is evened out in the moulds by hand. The curd is allowed to let sit for half an hour, then the mass of curds are turned while still in the moulds.

The nascent cheeses are then pressed by a 2.2 kg (5 pound) weight of cast iron placed on top of each cheese.

The cheeses are then dunked in brine briefly and aged a minimum of 4 weeks at 16 C (60 F). During this time, every two days the cheeses are turned and washed with whey. Some cheeses are aged 6 to 8 weeks. 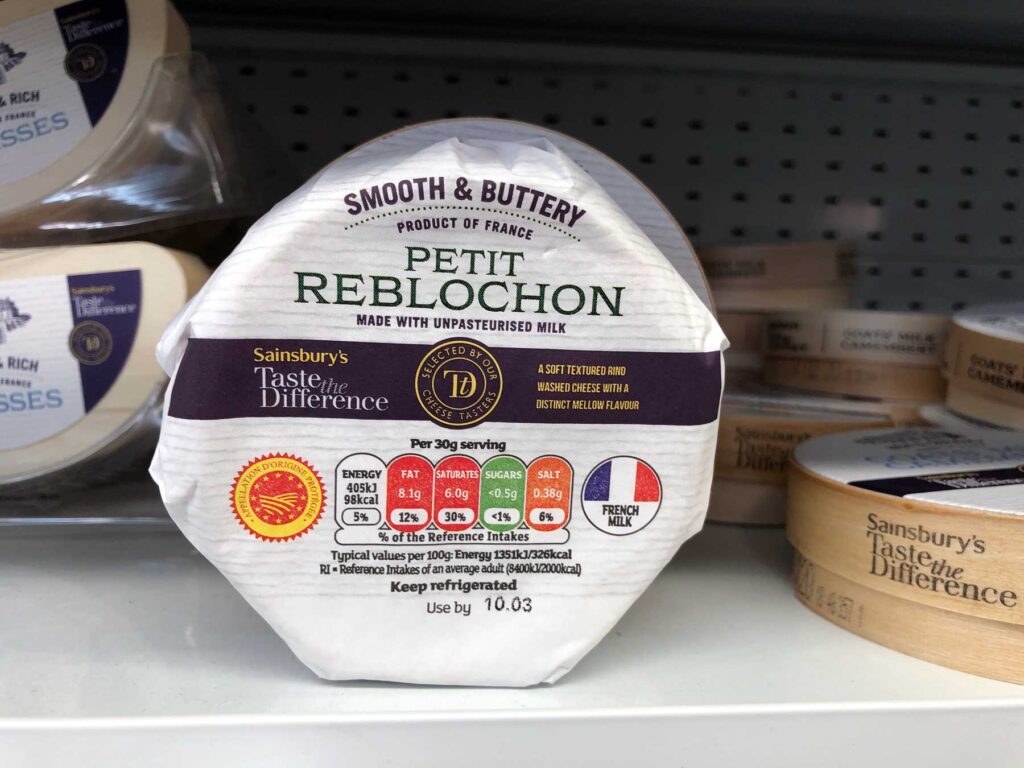 The import of reblochon to the United States has been banned since 2004 as it is a raw-milk cheese insufficiently aged to address concerns about any pathogens.

In 2012, three different brands of reblochon cheese were recalled owing to Brucella contamination in the raw milk used to produce them. [1]Brucella Warning on Three Brands of French Reblochon Cheese. Food Safety News. 30 April 2012. Accessed May 2012 at https://www.foodsafetynews.com/2012/04/brucella-warning-on-three-brands-of-french-reblochon-cheese (Bovine brucellosis is an infectious disease that can spread to humans through unpasteurized dairy products.)

In June 2014, two brands of reblochon were recalled for suspicion of the presence of salmonella in the raw milk. [2]Reblochon cheeses salmonella ? Dangers alimentaires. 29 June 2014. Accessed May 2022 at https://www.dangersalimentaires.com/en/2014/06/reblochons-aux-salmonelles/

In 2018, 7 children in France were confirmed with E. coli O26 infections linked to reblochon cheese; 6 of them developed severe cases. A recall of 350 tons of the cheese, which also extended to Canada, was initiated. [3]Cheese implicated in French outbreak recalled in Canada. Food Safety News. 15 May 2018. Accessed May 2022 at https://www.foodsafetynews.com/2018/05/cheese-implicated-in-french-outbreak-recalled-in-canada/

In 2021, six different brands of reblochon cheese were recalled in France after a case of bovine brucellosis was identified in a cow used in production of the cheese. [4]York, Joanna. Cheese recall after brucellosis case found in French dairy farm. The Connection. 18 November 2021. Accessed May 2022 at https://www.connexionfrance.com/article/French-news/Alert-Cheese-recall-after-brucellosis-case-found-in-French-dairy-farm

Some speculate that reblochon cheese originated in the 1200s, but the first written mention of it is in 1699.

Farmers had to pay their landlords an amount based on how much milk the cows yielded. When such a payment was due, and the owner was around to collect it, they’d only partially milk the cows.

Then, they’d milk them a second time once the owner had left. The second milking was higher in fat.

The cheese received its French AOC in 1958.

“Reblocher” in local Savoie dialect means to milk a cow a second time.

This web site generates income from affiliated links and ads at no cost to you to fund continued research · Information on this site is Copyright © 2022· Feel free to cite correctly, but copying whole pages for your website is content theft and will be DCMA'd.
Tagged With: French Cheeses, Savoie Food