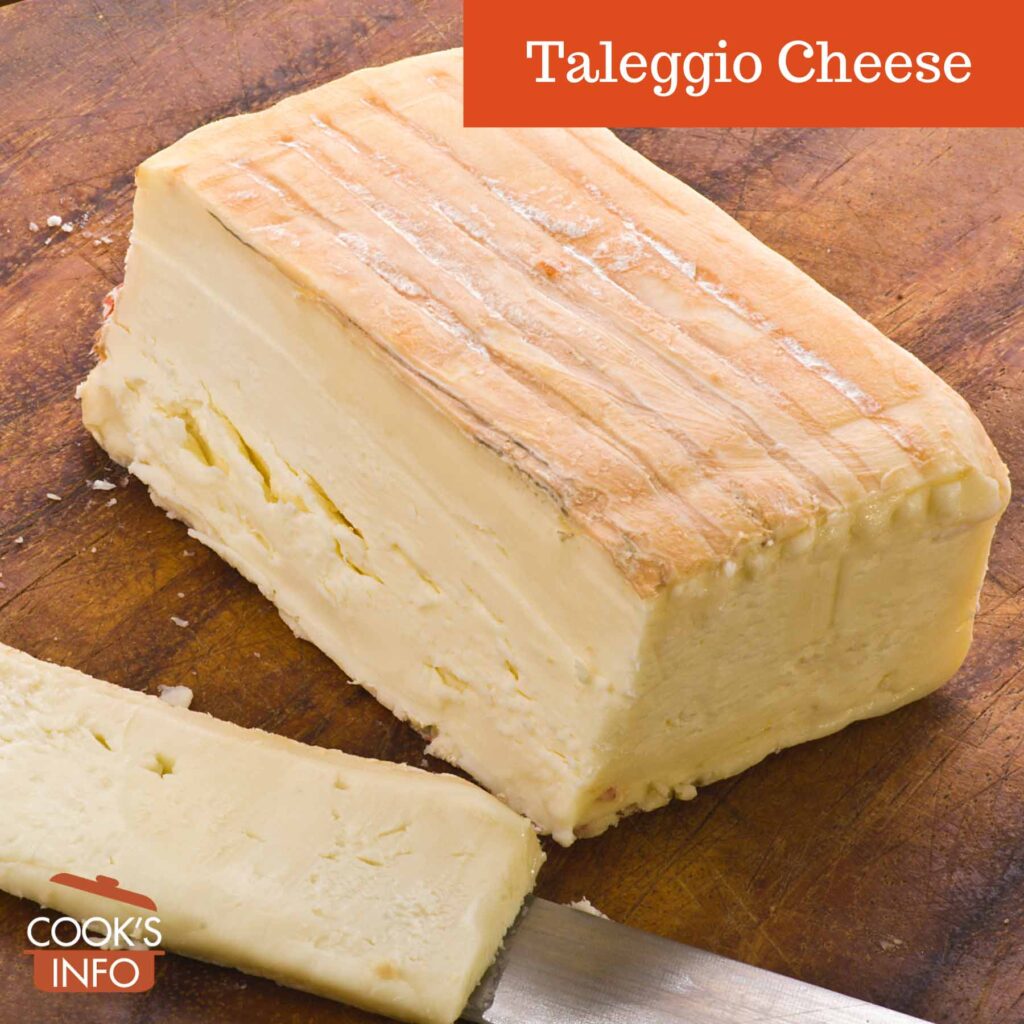 Taleggio Cheese is made in the Lombardy region of Italy, and in Val Taleggio in the Italian Alps, north of Bergamo.

The cheeses are stamped with the Taleggio trademark.

This is an EU PDO protected cheese.

The rind is edible, but very strong tasting.

The cheese is made in square or rectangular shapes. The orangey-pink rind is either coated in wax or mould; sometimes, it will have greyish or greenish patches of mould (the nicer word is “bloom”.)

Taleggio is normally made from raw whole cow’s milk, though sometimes pasteurized cow’s milk is used. The milk is heated to between 86 F and 97 F (30 and 36 C.) Calf Rennet and bacterial starter are added, and the milk is allowed to curdle for 15 minutes. The curd is then cut small, about the size of nuts, then put into metal moulds for 18 hours, during which time the curd ferments. The cheese is then removed from the moulds, soaked in brine, and then set to age for minimum of 35 to 40 days. It is turned several times while aging, and washed every week with brine to promote the growth of mould on it. The cheese used to be aged in caves; it is now aged in cellars.

Taleggio melts well and browns nicely. Italians use it a lot for dessert

Taleggio was first documented in 1200 as “stracchino”, meaning a tired cheese (sic), referring probably to the journey of the cows down from the mountain pastures. On a good day, of course, the marketing people date the cheese back to the Romans.

It was originally aged in the Valsassina caves in Como.

The cheese received its PDO in 1996. It can now be made in Bergamo, Brescia, Como, Cremona and Milan in Lombardy and in Treviso in Veneto and Novara in Piedmont.

This web site generates income from affiliated links and ads at no cost to you to fund continued research · Information on this site is Copyright © 2022· Feel free to cite correctly, but copying whole pages for your website is content theft and will be DCMA'd.
Tagged With: Italian Cheeses, Lombardy Food, Piedmont Food, Protected Designation of Origin, Veneto Food, Washed-Rind Cheeses