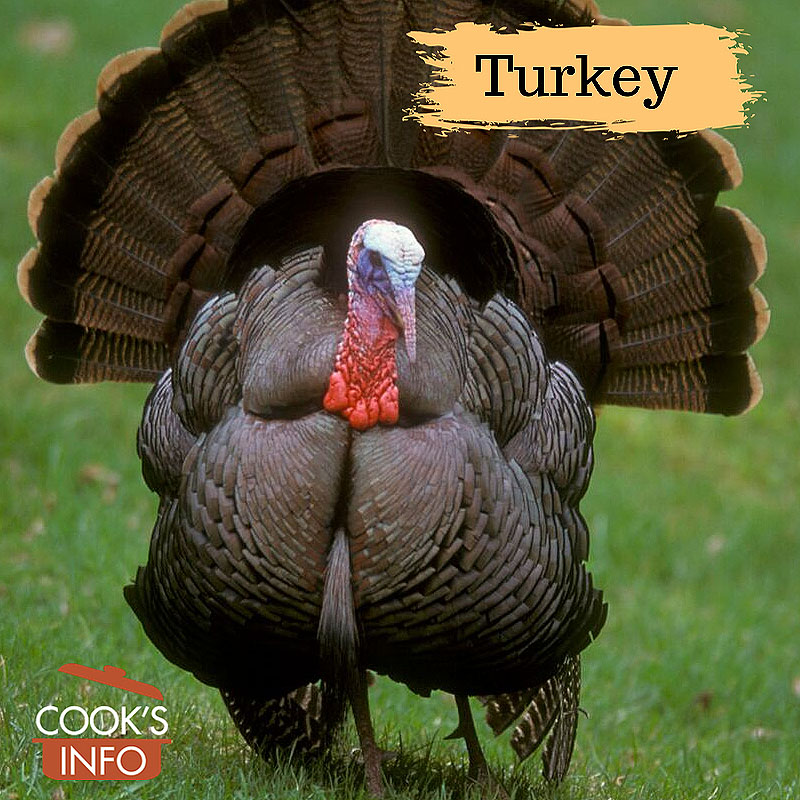 Turkey is a large bird found in both a wild and domesticated state. Most turkey consumed is domesticated.

In America, the predominant turkey breed is the American Bronze (aka Broadbreasted White), which was developed in the 1950s for size and weight. 99% of the turkeys sold are Broadbreasted White. These domesticated birds are so awkward that they can’t fly or run: they can’t breed by themselves, and have to be artificially inseminated. Without man around to help, there wouldn’t be a next generation of them. They are usually brought to market within 3 months of hatching, at an average weight of 27 pounds (12 kg.)When first hatched, turkeys are not fed for the first day or so, as they are still digesting yolk that is in their stomachs.

Both male and female turkeys are sold. The females tend to be smaller, but the trend is towards marketing smaller birds, anyway. Turkey marketing boards want us to think of turkeys as more than just a holiday bird. The 25 pound (11 kg) birds are fine when 20 members of the family have been roped in to help eat it, but it’s a bit much for a family of 4. For normal consumption such as this, smaller, 10-pound birds are reaching the market.

There are 4 heritage turkey breeds in America: American Standard Bronze, Bourbon Red, Jersey Buff and the Narragansett. Heritage breeds cost 3 to 5 times the price (2005 prices) of the standard Broadbreasted White, because they need about 8 months before they are ready for market. The weight ranges from 7 to 20 pounds.

French turkey breeds tend to be much smaller compared to British and American breeds.

Frozen turkeys thawed in the refrigerator will take between 20 and 48 hours to thaw. So, don’t wait till Christmas Eve to start thawing, or there will be tears all round the next morning.

In calculating cooking time by weight, include the weight of the stuffing in your calculations.

In calculating serving time, don’t forget to about about 1/2 hour of resting time onto the end of cooking time before carving and serving. More time is fine too.

To do a rush thaw and try to save the day, leave the turkey in its plastic wrapping, unstuffed. Put it in a large dishpan or something big, and cover the bird with cold water completely. Change the water every 30 minutes; allow 30 minutes per .5 kg (pound). With this method, for example, a 4.5 kg (10 pound) bird will take 5 hours to thaw, as opposed to 19 hours or more without changing the water. 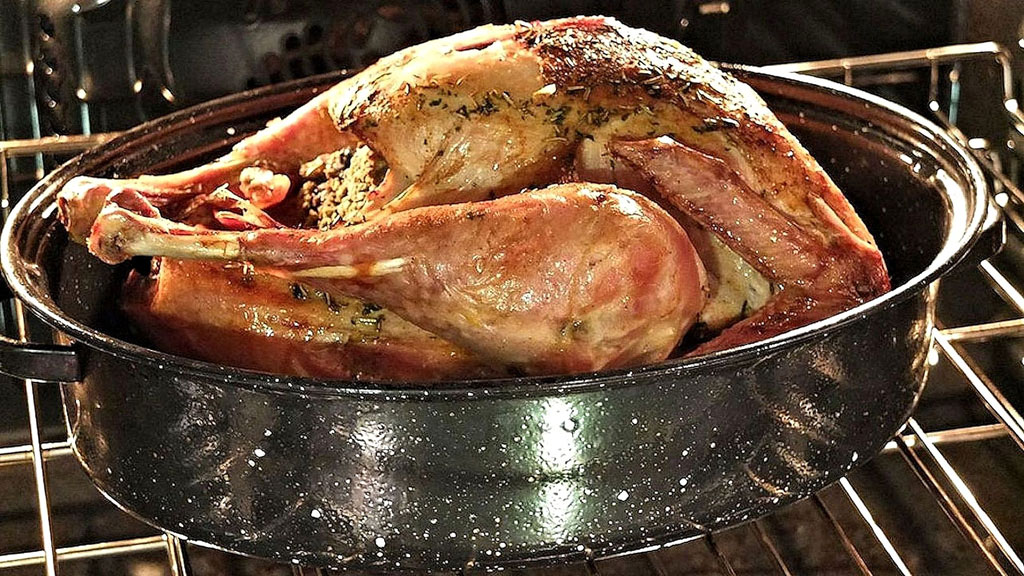 Remove a thawed turkey from the refrigerator 1 1/2 hours (but no more than that) before roasting it to allow the chill to just come off of it. This will help ensure more even cooking in the centre, and help to make sure that all the estimated cooking times you will see actually work for you.

Remove any separate bits (such as giblets, etc) from inside the turkey. (You can boil these in a separate pan to make juice for gravy.)

The British Food Standards Agency and the USDA advise against washing turkeys (see Nutrition below.) Salt the inside.

In general, roast a turkey for 45 minutes a kilogram / 20 minutes a pound at 163 C (325 F ); allow a bit more time at the end overall if the turkey is stuffed. Cook the turkey uncovered for the first and last 30 minutes, but covered with foil in between. 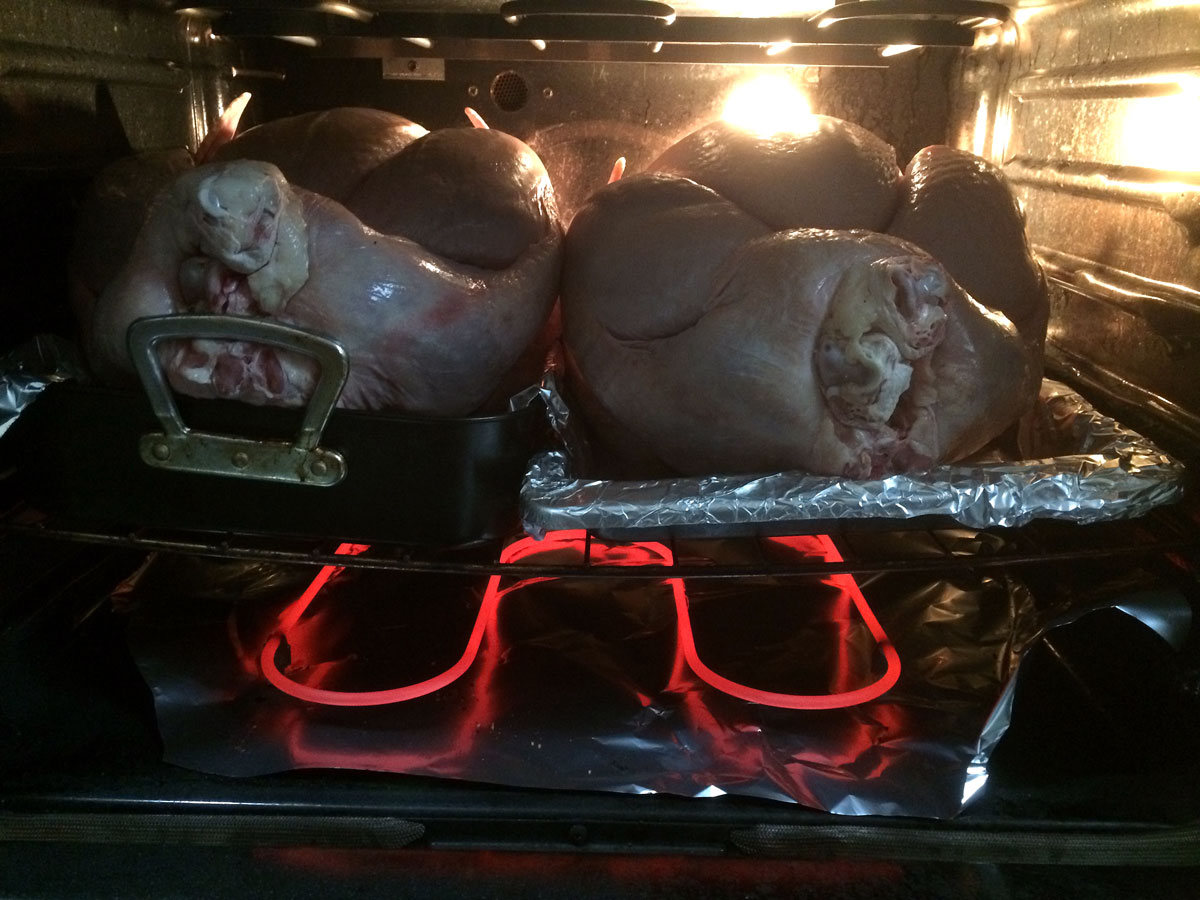 It’s a myth that cooking turkey over or in a small amount of water will help keep the meat moist. Meat exudes water during cooking; it doesn’t absorb it.

To reheat leftover turkey without its going dry:

Heat a little milk in a pan over low heat, then add turkey slices and simmer until turkey is just warm — about a minute. If using a microwave, heat the milk first in a dish, then add turkey and cover with plastic wrap and heat again.

Some people advocate that the best way to cook a Christmas turkey is to cut off the legs: give the rest of the turkey a 30 minute head start in the oven, then add the legs to the roasting pan. The idea is that because the legs take less time to cook, you won’t be worrying about the different cooking times between the legs and the body of the bird. This approach has the visual downside of a leg-less turkey landing on the table.

Turkeys that approach the 9 kg (20 pound) mark almost always have dry breasts when cooked. There are two popular methods cooks use to prevent dry turkey. One is brining (see separate entry on Brining a Turkey); the other is to cook your turkey upside-down (sic).

Cook the turkey for the first half of the cooking time breast side down, covered. Then, turn it right side up, and finish cooking uncovered.

Why this works is that there are two pockets of natural fat down the turkey’s back bone. With those on the top, the fat in them will render and baste the breast. When you turn the bird over, the fat that it had absorbed from the bottom of the pan will then drain back down through the turkey. And don’t worry: after you turn the turkey back right-side up, it will have plenty of time to brown and look good.

The British Food Standards Agency now advises against washing turkeys. They say that not only is it not possible to wash away any dangerous bacteria that can only be destroyed by proper cooking, but that in washing, most people splash the bacteria about the sink work area and surrounding counter space and taps, actually raising the possibility that bacterial contamination will occur. [1]BBC News. Warning over washing turkey meat. 12 December 2007. Retrieved 12 Dec 2007 from http://news.bbc.co.uk/2/hi/health/7140651.stm

Use fresh turkeys within two days of buying, unless the one you purchased came with a “use-by” date that advised otherwise.

Turkeys will freeze for up to a year, so if you see bargain prices after holidays, you can stock up on one or two. But they don’t go on sale the way they used to, given the increasing year-round popularity of turkey for ordinary meals. You can freeze for longer than a year, but quality may suffer eventually.

Before refrigerating leftover turkey, remove any stuffing from inside it, and refrigerate that separately. 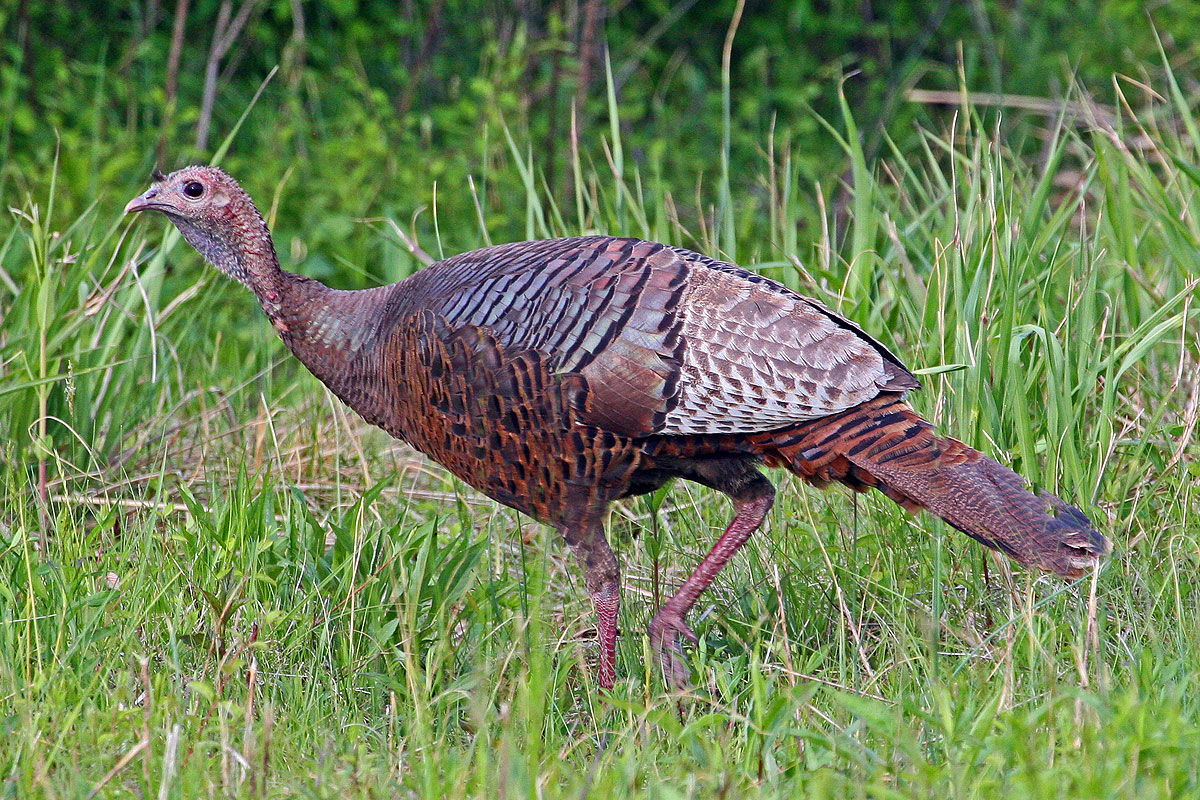 Turkeys are native to Central Mexico. They were domesticated before the Europeans arrived, and spread throughout the area including the Caribbean. Europeans actually encountered turkey first in the Honduras.

European explorers to the Americas brought back turkeys with them; by the end of the 1500s, turkeys were being raised in England, France and Italy (pace Brillat-Savarin, below, who put it in the 1600s.) Domesticated turkeys were introduced into the American colonies from Europe. Europeans prepared them in the same ways as they already did other fowl: e.g. stuffing, roasting, etc. The first recipe in print for turkey is in Francois Pierre de la Varenne’s book, “Le Cuisinier François”, published 1651:

When the American Pilgrims had their Thanksgiving Dinner in 1621, they would already have known about turkeys, and maybe even have had it already back in England.

Wild turkeys survived only along the edge of the settlement line in America, until the populations along that line were eliminated. Wild turkeys have now been re-introduced in many areas.

Ben Franklin wanted the turkey to be America’s national symbol, instead of the bald eagle.

Thanksgiving was proclaimed a holiday in November in America in 1863 by Abraham Lincoln. Canadians adopted the holiday as well.

The first meal on the moon, enjoyed by Neil Armstrong and Edwin Aldrin, was turkey.

Turkey was not popular for Christmas in the UK until the late 1800s, and remained a luxury in the UK up until the 1950s.

It’s a myth that turkeys will stand in the rain and drown. What can happen is that young chicks, having only down and no feathers yet for protection, will get wet, cold and die of exposure.

In Italy, turkeys are often slaughtered and eaten on Martinmas Day (11 November).

In 1825, Brillat-Savarin, the French gastronome, wrote:

“The turkey is certainly one of the most glorious presents made by the new world to the old.

Those persons who always wish to know more than others, say that the turkey was known to the ancients, and was served up at the wedding feast of Charlemagne. They say it is an error to attribute the importation to the Jesuits. To these paradoxes but two things can be opposed:

1st. The name of the bird proves its origin, for at one time America was called the West Indies.
2d. The form of the bird is altogether foreign.

A well informed man cannot be mistaken about it.

Though already perfectly satisfied, I made much deep research in the matter. I will not inflict my studies on my readers, but will only give them the results:

1. The turkey appeared in Europe about the end of the seventeenth century.

2. That it was imported by the Jesuits who sent a large number especially to a farm they had near Bouges.

3. That thence they spread gradually over France, and in many localities a turkey to this day is called a Jesuit.

4. Only in America has the turkey been found in a wild state, (it is unknown in Africa.)

5. That in the farms of North America, where it is very common, it has two origins, either from eggs which have been found and hatched or from young turkeys caught in the woods. The consequence is they are in a state of nature and preserve almost all their original plumage….

The same researches (Ed: sic) informed us that the turkey gradually became acclimated in France. Well informed observers have told me that about the middle of the last century of twenty young turkeys scarcely ten lived, while now fourteen out of every twenty mature. The spring rains are most unfortunate to them; the large drops of rain striking on their tender heads destroy them.” — Jean Anthelme Brillat-Savarin in The Physiology of Taste, Section IV. THE Turkey, Project Gutenberg, Apr 2004. First published Dec 1825.

“The piece de resistance of the Christmas dinner which bears the Government’s seal of approval is the national bird of America, the turkey. Uncle Sam’s cooking experts state that a good sized bird should be selected – one between eight and twenty pounds – and care should be exercised that the fowl is not more than a year old. After the turkey is carefully cleaned, stuff it with a mixture of stale bread, chestnuts, bay leaves, a dash of cayenne, some fresh (not cooked) celery and a trace of onion… In cooking the bird, care should be taken that it does not remain too long in the oven, for this will render the meat dry and tasteless. The natural juices of the fowl are what render its flesh so delicious, and super-roasting will dry these up. The turkey should be cooked in a moderately quick oven until the skin is a beautiful rich brown. Frequent basting will do much toward preventing the meat from drying up.” — U.S. Expert Suggests Ideal Christmas Dinner: Miss Caroline L. Hunt, of Bureau of Home Economics of Department of Agriculture, Also Gives Reason Why She Has Selected Items on Her Menu. New York Times. 19 December 1915.