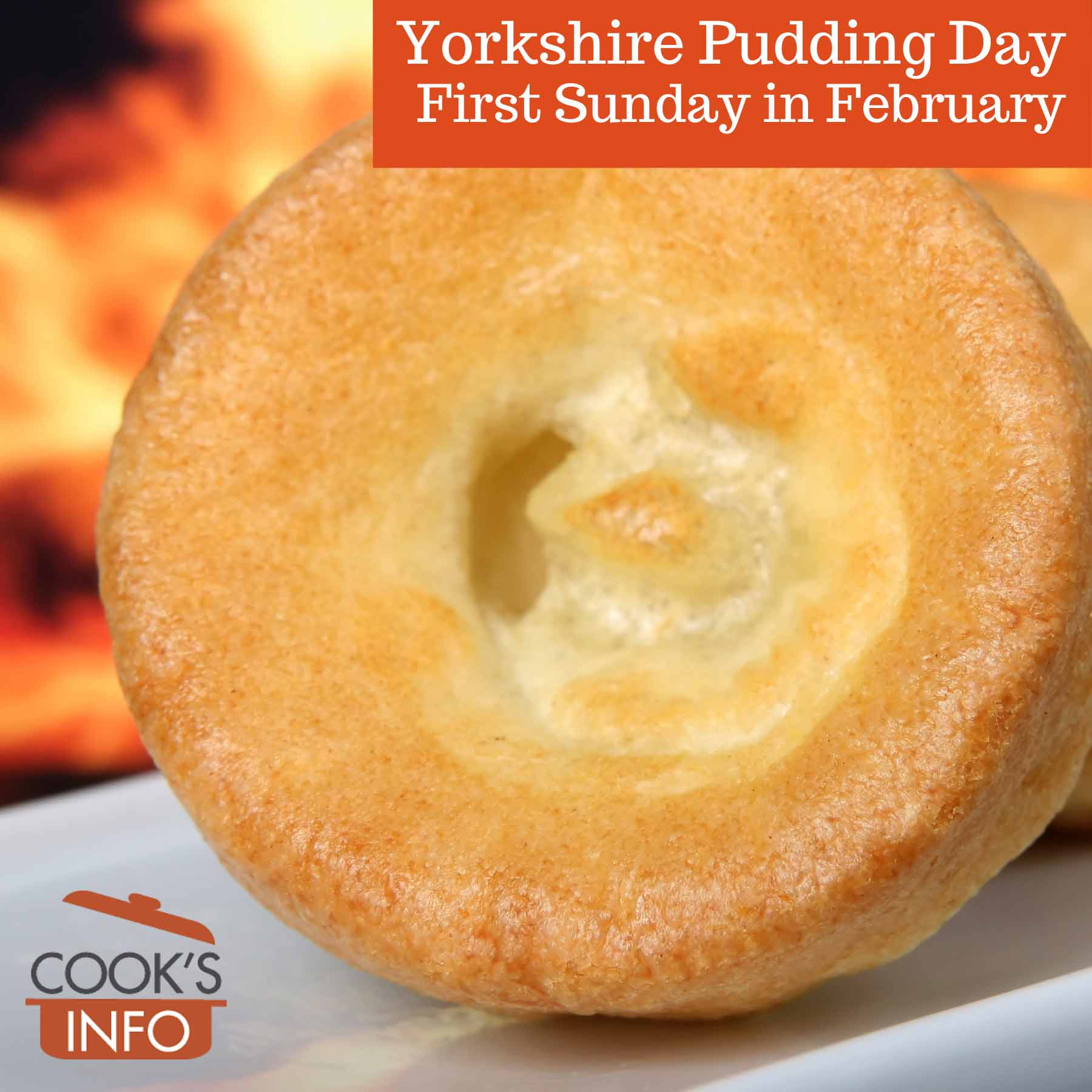 The first Sunday in February is Yorkshire Pudding Day.

It’s a day to celebrate Yorkshire puddings by treating yourself to some, whether you make from scratch or from frozen, or treat yourself to some as part of a pub or restaurant meal.

Yorkshire pudding is a savoury crispy puff, made from a batter and cooked in fat. It rises, puffs and crisps as it cooks.

Traditionally, “Yorkshires” (as they are fondly referred to) were served with beef, but now many people insist they are good for any kind of meal where there is gravy. Some restaurants in England (such as Toby’s Carvery) even serve them at breakfast now.

You can make a Yorkshire pudding as one large pudding in a square cake pan to be sliced up, or, as small individual ones in muffin tins, or as one plate-sized one that acts as a bowl to hold a meal for one person.

Some people will follow a Yorkshire pudding recipe to a T and still encounter failure. Others will not follow a recipe or measure anything and make perfect puddings effortlessly every time.

You can have a Yorkshire as a starter to a meal, or as part of the main course.

And should you miss today, the good news is that the Americans have started a Yorkshire Pudding Day (US) in October as well, so you can always catch up then. Or, celebrate both days — as everyone knows, when it comes to Yorkshires, the more, the merrier!

In 1912, an advertisement page for Sandow’s Baking Compound (baking powder) declared that the 15th of December 1912 would be Yorkshire Pudding Day: 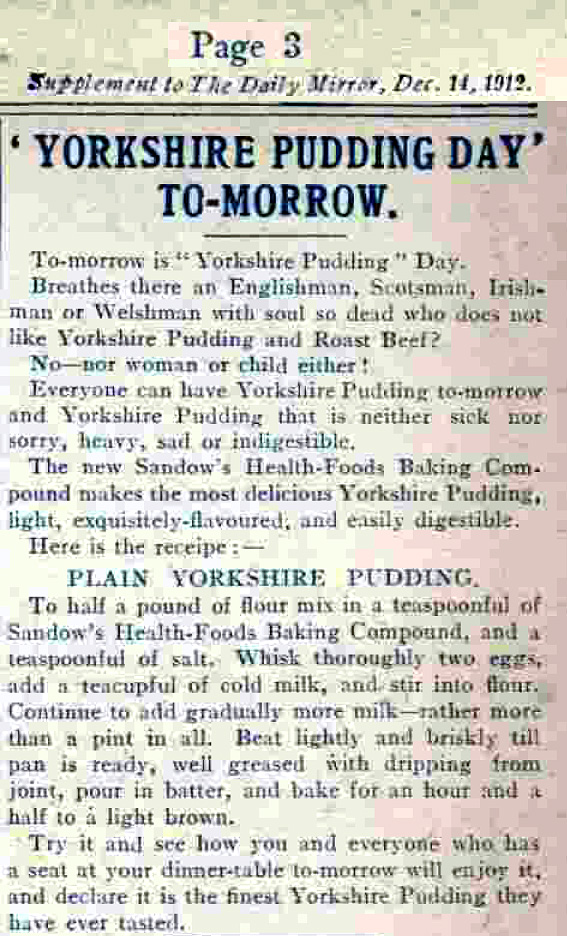 In 1978, a Yorkshire restaurateur named Geoffrey Wright worked to rally effort around the 24th of May as Yorkshire Pudding Day:

“A Yorkshire hotelier has proclaimed May 24, formerly Empire Day, as Yorkshire Pudding Day. Mr. Geoffrey Wright, of The Old Swan, Harrogate, said: “Yorkshire pudding is a great institution. It ought to be celebrated in true Yorkshire style.” — Power to the pudding. London, England: Daily Mirror. Sunday, 31 December 1978. Page 27, col. 2.

A 2009 mention by London chef Tom Aiken implied that 2008 had been the first year, though it’s possible he was mistaken:

“Yorkshire puddings have been around for centuries. Originally flatter in shape, they were served as a starter by Yorkshire housewives to fill the family before the more expensive meat course. This Sunday is the second annual British Yorkshire Pudding Day — a great excuse to gather friends and family and tuck into the old classic. Aunt Bessie’s has maintained an unrivalled reputation for tasty puddings and for a ready-made recipe, they are not at all bad — golden and crispy on the outside, light and fluffy inside, just as they should be (www.auntbessies.co.uk).” — Aikens, Tom. Food Spy. London, England: Evening Standard. Friday, 30 January 2009. Page 45, col. 2.

Some American food holiday websites say that National Yorkshire Pudding Day falls on the 13th of October, but, as this is a thoroughly English dish, CooksInfo has chosen to go with the English date, reckoning that the English would have a leg up on best knowing when the day actually was.