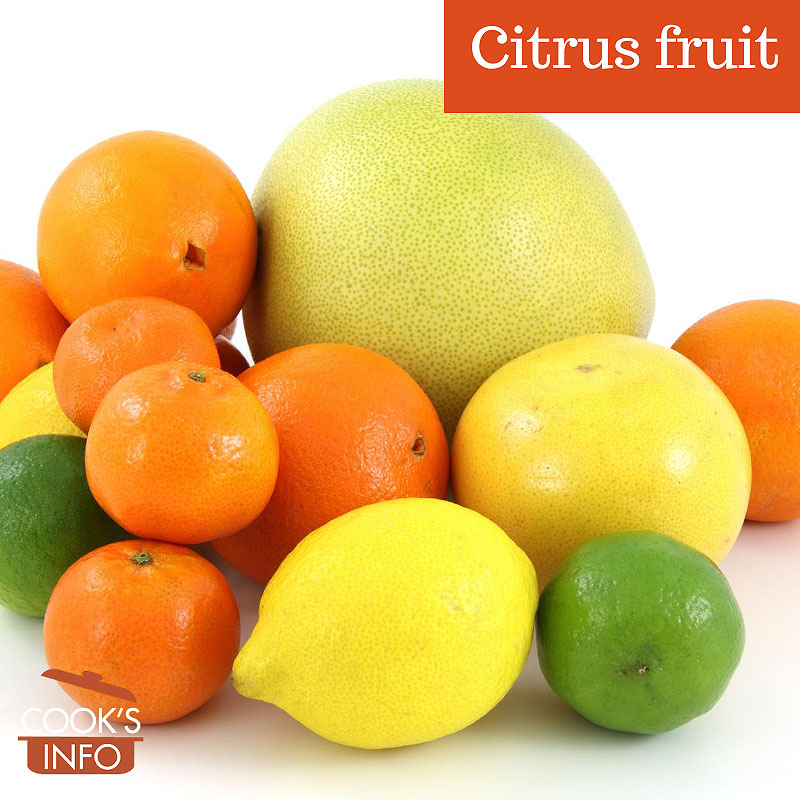 Citrus are tropical acidic fruit with a thick rind. Inside they have pulpy flesh divided into sections. Some are sweet, some are very sour.

The fruit is valued above all other fruits for their juices. The juices have both health benefits, being rich in Vitamin C, and cooking benefits: the acidity of the juices makes other ingredients taste fresher. The peel of citrus fruit is very high in pectin, and is used as a source of commercial pectin. The peel can also be used in candied fruit mixtures or as candied peel.

Most citrus trees are evergreens — in the right climate, of course. All citrus fruit grows in warm climates. Most citrus varieties are actually cultivars, propagated by grafting.

The sour ones, such as lemons, limes and bitter oranges, can basically be swapped for each other in recipes. Though the flavour of course will be somewhat different, they will still have the same souring and refreshing effect.

Generally, store at room temperature, but refrigerate if planning to store for over a week. Can be shipped waxed or unwaxed; waxing makes them seem a bit more shiny and appealing, but also preserves shelf life by keeping moisture in.

Citrus fruit originated in South-Eastern Asia, perhaps Malaysia. By 4000 BC, they were in the Middle East.

Citron was the first citrus fruit.

The Egyptians did not have citrus fruits until after the Roman conquest, when the Romans introduced them. An early form of oranges is depicted on Constantine’s mausoleum. Citrus fruits are believed to have disappeared from most of Europe after the fall of Rome, until reintroduced by the Arabs in Spain in 900 AD. According to local beliefs, however, some citrus remained in pockets of southern Italy.

Acidity came to be identified by sailors as both a preventative and a cure for scurvy. It turned out, however, that it wasn’t just any old acidity: the acid needed was ascorbic acid — otherwise known as Vitamin C. This meant that even though limes are more acidic then oranges, or lemons, because they have more citric acid (and thus a lower pH), because they contained less ascorbic acid, they actually weren’t as effective as oranges and lemons.

Initially, the identity of lemons and oranges was often confused. And later, the British Navy decided to focus on actual limes – which was the wrong decision:

“Oranges have more Vitamin C than lemons, which have about 40% more Vitamin C than limes… If that lime juice was stored in a barrel or came into contact with copper or cooked to reduce it (which was usually the case until the invention of Rose’s Lime Juice Cordial), the Vitamin C would degrade even further, becoming nearly useless against scurvy… The initial confusion over the definition of limes (oranges never took off, and the juice of lemons was often called lime juice), and the later decision to switch from lemons to limes, proved fairly disastrous to the British. Incidents of scurvy in the Navy crept up again and new false medical theories with other problematic solutions came back into vogue.. It wasn’t until 1918 that it was proven that citric acid itself is useless against scurvy , and shortly thereafter that the newly-identified Vitamin C was the anti-scorubic needed.” [2]English, Camper. Historical Info About Scurvy and the Confusion Between Lemons and Limes. Alcademics blog. 1 November 2018. Accessed August 2020 at https://www.alcademics.com/2018/11/historical-info-about-scurvy-and-the-confusion-between-lemons-and-limes.html

This web site generates income from affiliated links and ads at no cost to you to fund continued research · Information on this site is Copyright © 2023· Feel free to cite correctly, but copying whole pages for your website is content theft and will be DCMA'd.
Tagged With: Ancient Egypt