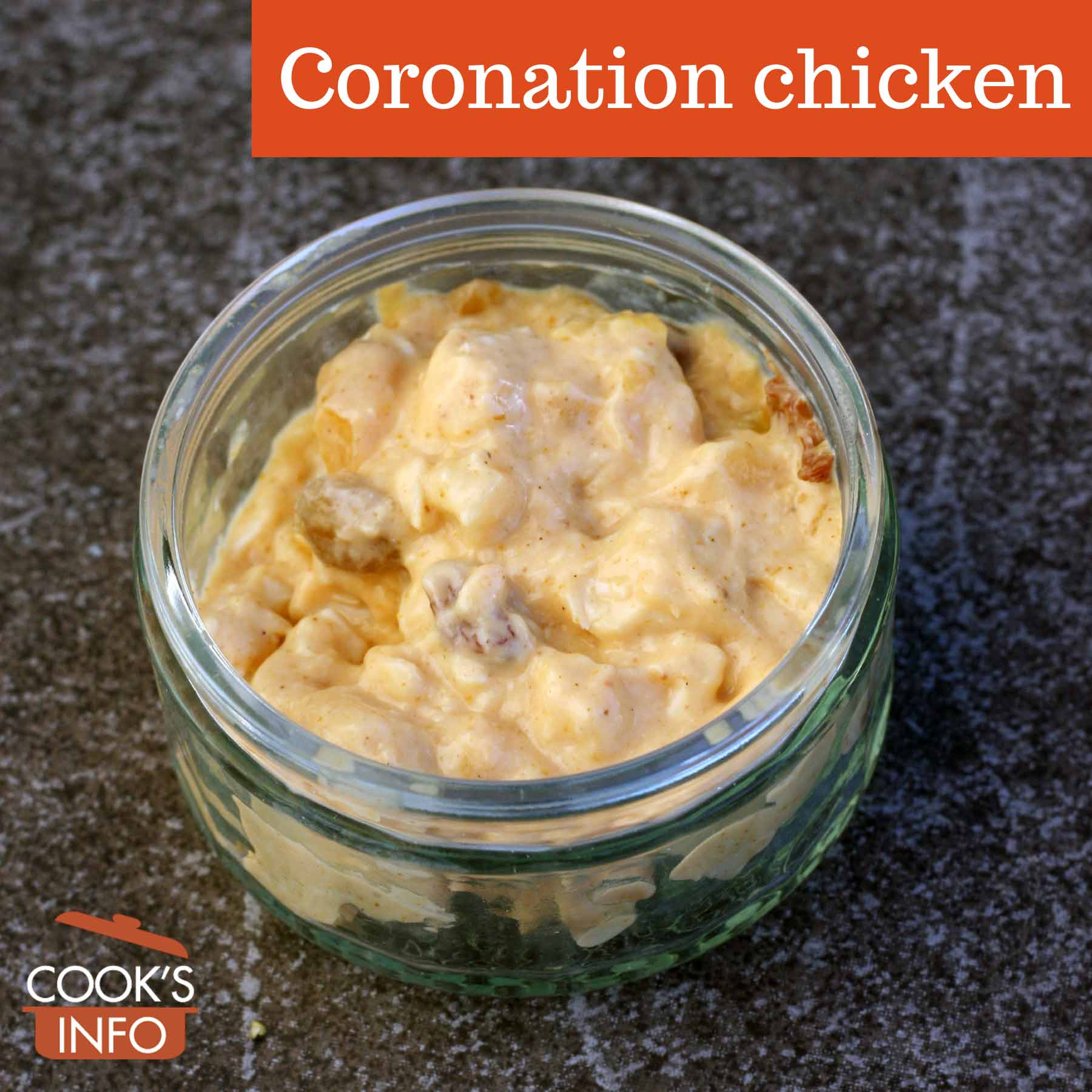 It is bright (at times almost lurid) yellow from the curry powder.

Many more elaborate versions have emerged over the years, adding almonds, raisins and even continentalizing it by using crème fraîche and aïoli.

For decades, Coronation Chicken was a popular British summer salad.

Though it is somewhat out of fashion now, it has been very popular as a ready-made sandwich filler. You can buy tubs of Coronation Chicken mix at supermarkets to be used as a filling in sandwiches. Grocery stores even sell their own brands of it. 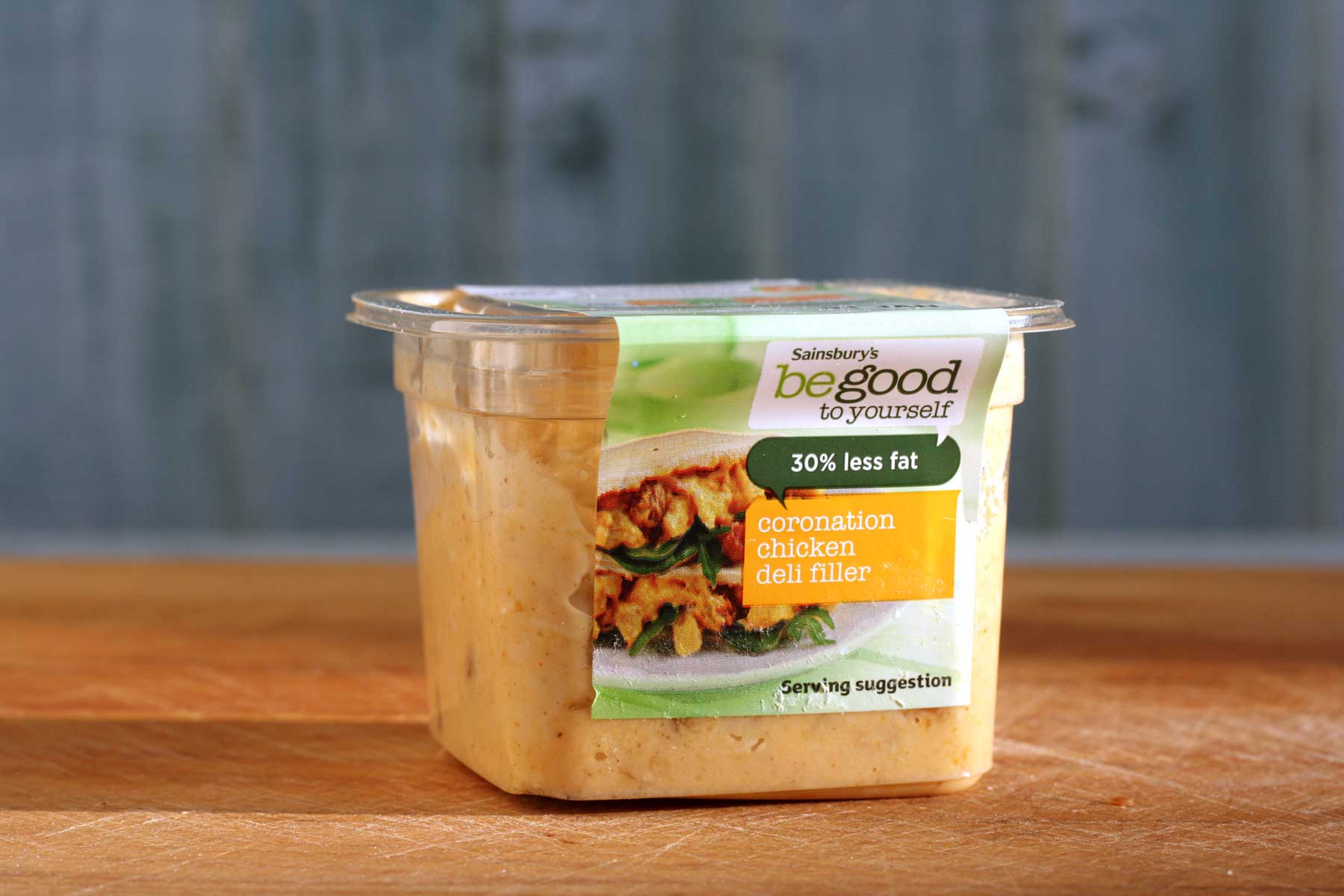 Using prepared curry powder is more authentic than making up your own curry powder: when the recipe was created (see history), curry powder would have been more readily available than the individual constituent spices to make it up.

In place of the apricots, you can use apricot preserves, apricot jam, or chutney.

Best served room temperature, rather than completely cold from the fridge.

Coronation Chicken was created specially for Queen Elizabeth II’s coronation lunch in 1953. The Minister of Works approved the recipe, put forward by Constance Spry [1]Spry also managed the flower arrangements at Westminster Abbey and along the processional route that day., for inclusion on the lunch menu. On that day, it was served to the Queen and all the foreign dignitaries, accompanied by a rice salad. [2]The rice salad was made of rice, garden peas, diced raw cucumber, and a chopped assortment of herbs, mixed in French dressing.

The recipe was published in advance of the day in newspapers and magazines, so that it could be made and served by ordinary people at their street parties throughout Britain on the Coronation Day.

Some feel that Constance Spry didn’t actually invent the recipe; that it was instead her business partner, Rosemary Hume. Still others feel that it was the students at Hume and Spry’s Cordon Bleu cooking school who came up with it. In any event, it was the students who prepared it for the Queen’s lunch that day in 1953 and it was probably a new treatment of older versions of chicken salad. The most likely candidate is Jubilee Chicken, chicken in mayonnaise and curry, made for the Silver Jubilee of George V in 1935.

The recipe didn’t appear in a cookbook until 1956, when it was printed in “The Constance Spry Cookery Book.” It proved popular with all classes in England, as it made a great buffet dish that could be prepared in advance. For convenience of serving, Spry recommended an oblong dish, with the chicken at one end, and the rice salad at the other.

It was so popular as a sandwich filler that at one point, even the upscale sandwich chain “Pret A Manger ” offered it up until about 2005.

A follow-up recipe, Golden Jubilee Chicken, was made for the Queen in 2002.

“One would not venture to serve, to a large number of guests of varying and unknown tastes, a curry dish in the generally accepted sense of this term. I doubt whether many of the 300-odd guests at the coronation luncheon detected this ingredient [curry powder] in a chicken dish which was distinguished mainly by a delicate and nutlike flavour in the sauce.” — Constance Spry. The Constance Spry Cookery Book. 1956. 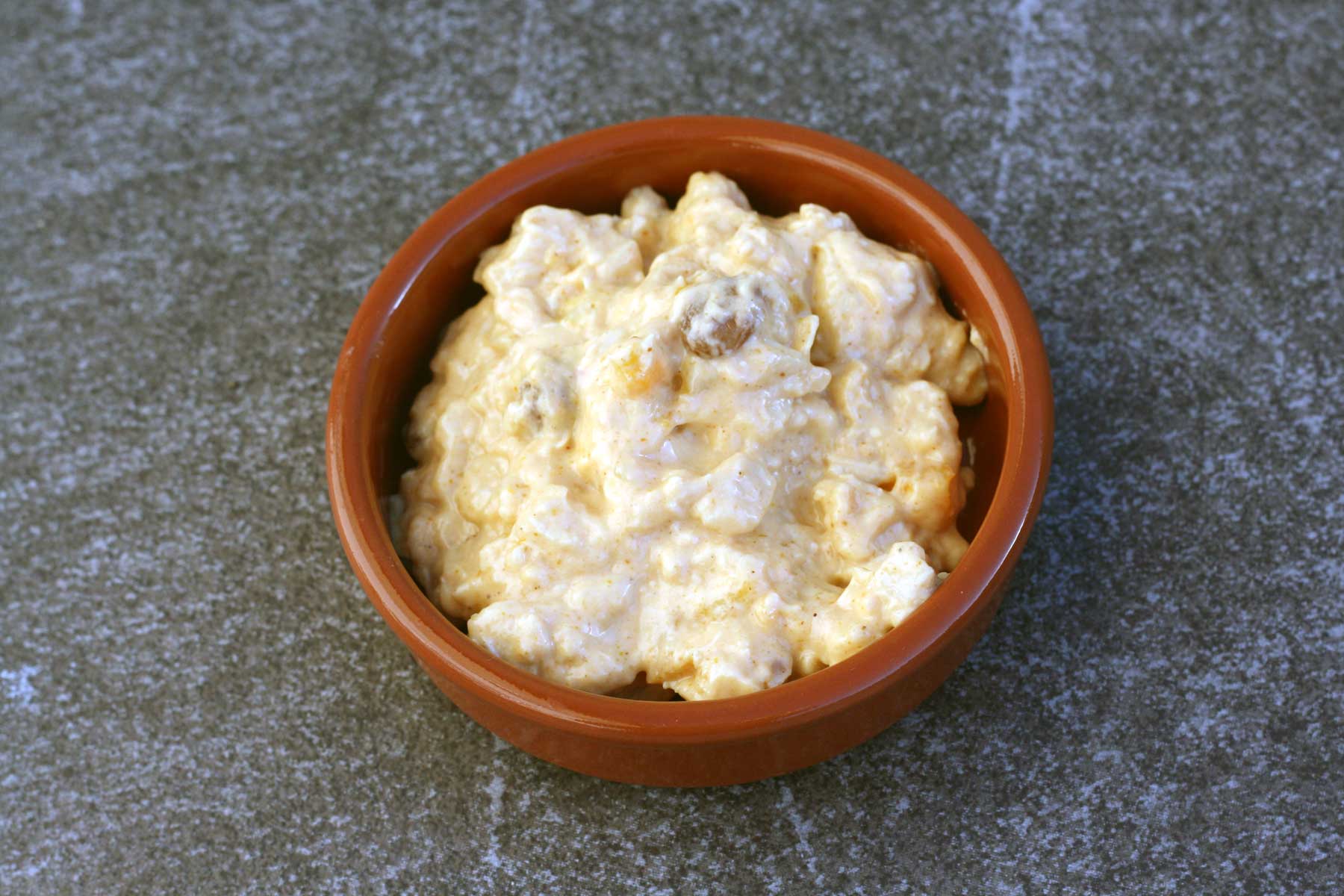