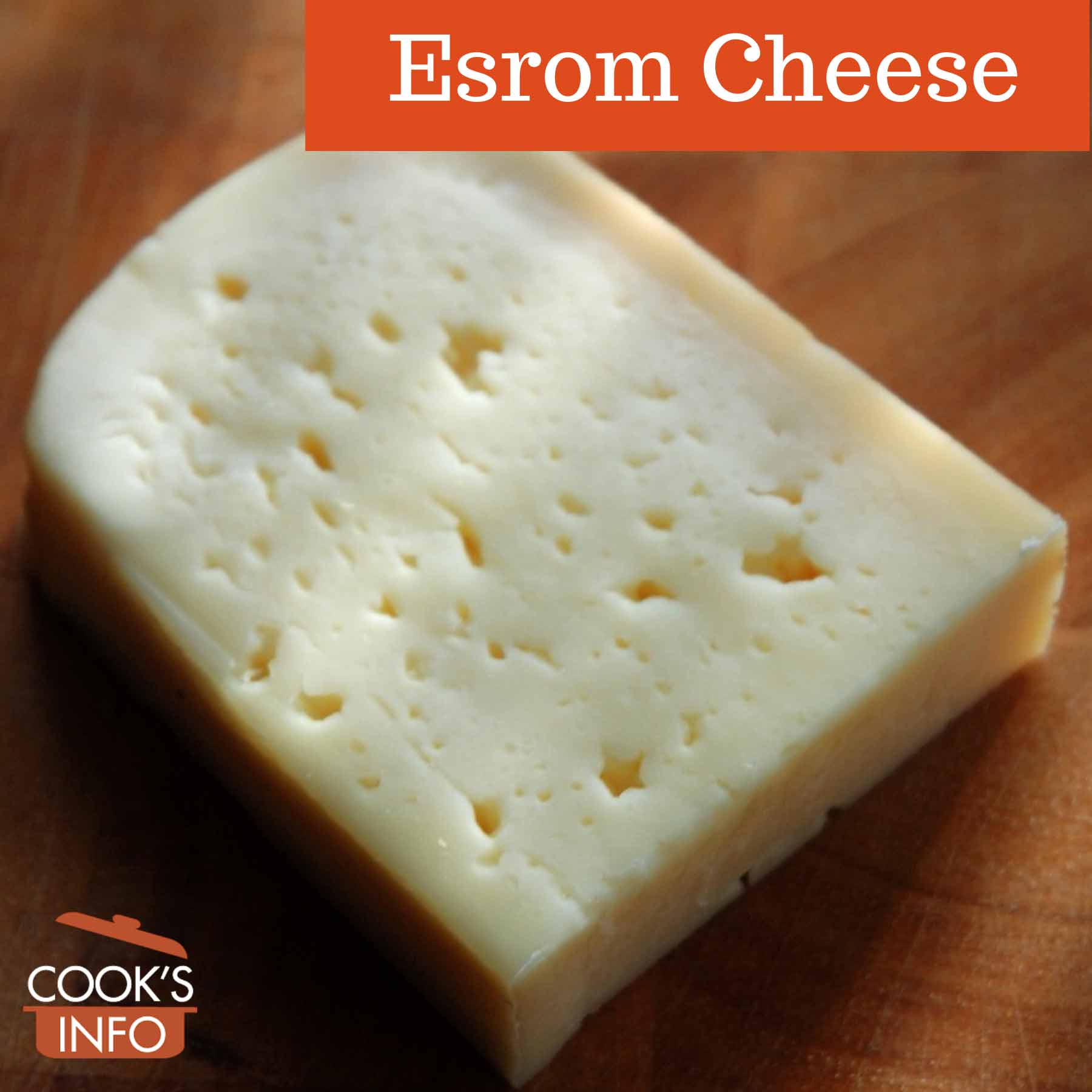 Esrom is a semi-firm Danish cheese made from partially skim raw milk from cows. Starter and rennet are added to the milk, then the curd is cut, stirred, drained and warmed. The cheese is place into moulds and lightly pressed. The surface is then salted and rubbed with a bacteria, then aged for 10 to 12 weeks. The cheese’s rind is washed during aging.

The rind ends up thin, hard and orange, feeling almost greasy. Inside, the cheese is light-yellow and semi-firm; its texture is pliable, making it easy to slice. There are small holes throughout the cheese inside.

The cheese has a strong odour, but the taste is actually mild.

The cheese is available in different fat contents, ranging from 22.5% to 60% and in different flavours such as garlic and pepper.

Benedictine monks tried in 1140 to found an abbey at Esrom in northern Sjæland (Zealand, aka Nordseeland), Denmark. Their attempts failed. In either 1151 or 1154, Cistercian monks from an Abbey at Clairvaux in France took over the abandoned buildings and property, and dedicated the Abbey to Mary. There, like many other Cistercians, they set about trying to make a living by producing and selling things such as cheese. At the time, though, even though Cistercian monks could produce eggs, milk and cheese for sale to support themselves, they were forbidden from eating these things as they were said by their order to be a luxury.

The Abbey was very prosperous and came to own much land until the Reformation arrived in Denmark in 1536. In 1559, the monks were made to go to another Abbey, and demolition of the abbey began, with the material being taken away to make Kronborg Castle in Elsinore. Production of the cheese ended with the departure of the monks. Only one wing of the Abbey and some old farm buildings are still extant. 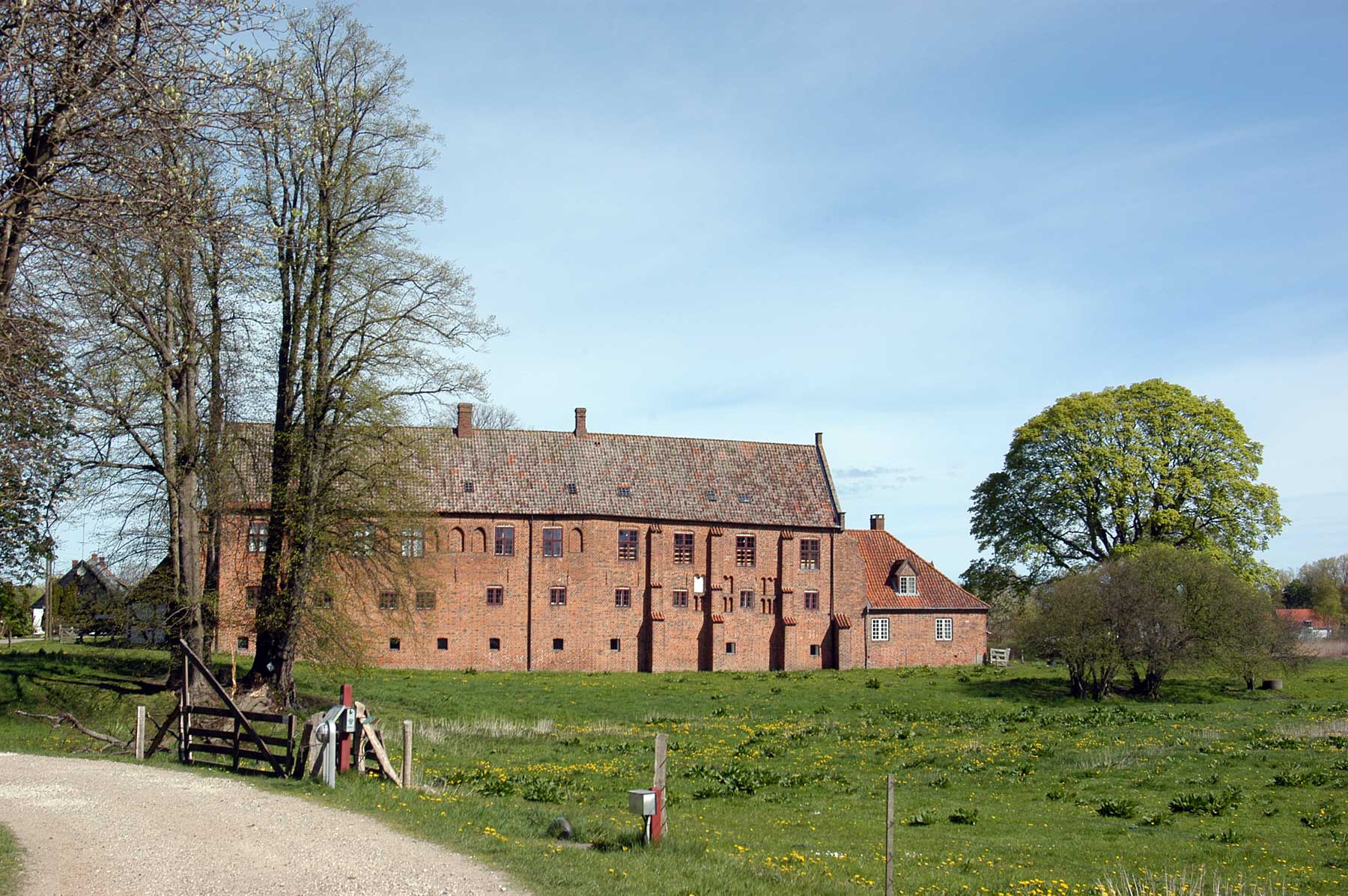 The “National Experimental Dairy” in Denmark started attempts to recreate the cheese starting in the mid-1930s. Their research was interrupted by the Second World War. But by 1951, the Danish Cheese Institute felt that it had managed to recreate the cheese. At first, they named it “Danish Port Salut”. As various EU laws came into effect, however, the name was put in the position of violating the French trademark for the name “Port Salut” cheese. Consequently, they renamed it Esrom.

The first company to make it was “Midtsjaelands Herregardsmejeri”. Other dairies then followed suit.

Esrom was granted PGI status in 1996. The PGI status is administered in Denmark by the “Foreningen af Danske osteproducenter” (Association of Danish cheese manufacturers.) Random samples of it are tested four times a year by “Steins Laboratorium A/S.”

Note that it is doubtful whether the recreated cheese is the same as the one the monks had made: the researchers recreating the cheese didn’t have the original recipe; they just knew that it was a Washed-Rind Cheese with a strong smell.

This web site generates income from affiliated links and ads at no cost to you to fund continued research · Information on this site is Copyright © 2023· Feel free to cite correctly, but copying whole pages for your website is content theft and will be DCMA'd.
Tagged With: Danish Cheeses, Protected Geographic Indication, Skim-Milk Cheeses, Smear-Ripened Cheeses