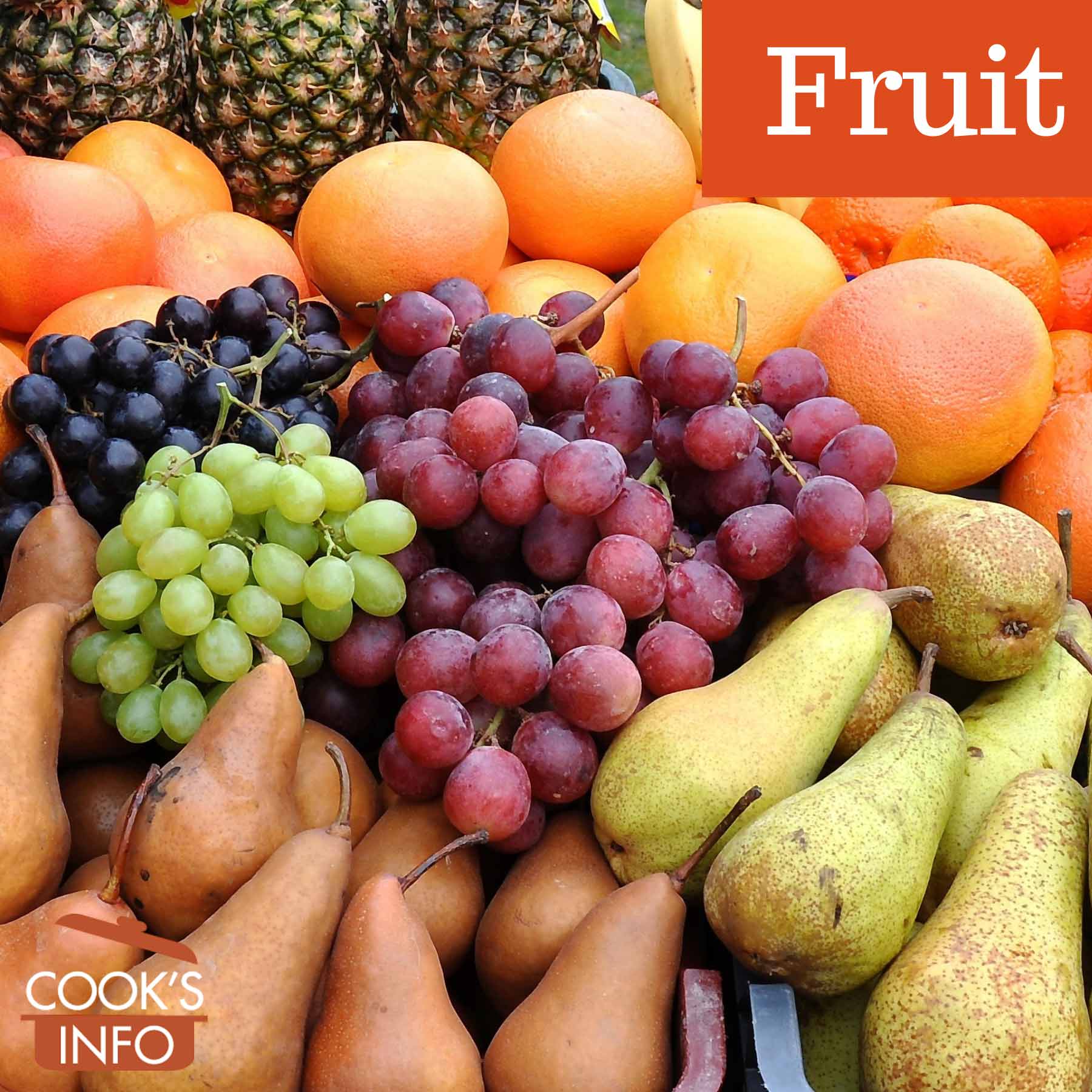 In culinary terms, fruit is an edible fleshy growth produced by a plant after flowering which bears the plant’s seeds to reproduce. The taste of the fruit may be sweet or sour. Typically, the fruit is edible out of hand, with no cooking or preparation required.

For a fruit to be perceived as tasting good, it must have the right sugar-acid balance for that particular fruit. Too much acid makes the fruit sour; too little makes it bland and boring. In apples, the acid is malic acid; in citrus fruits, citric acid; in grapes, tartaric acid. The acids are synthesized inside the fruit, partly from sugars.

Sugar-starch balance is also important, particularly in fruits such as bananas.

The more a fruit bounces, the higher it is likelier to be in pectin.

Don’t pour liquids from canned fruit down the drain: you’re pouring away convenience.

To make a glaze or a sauce for desserts, stir in some cornstarch or tapioca into the juice and heat until thick. Instant wow factor for your desserts. Or pour into the punch bowl to jazz up the masterpiece concoction you are brewing for your guests.

To store the juice until you do need it, just freeze in a plastic tub. All juices from tinned fruit freeze well. Thaw when you need the convenience of the instant flavour or an effortless finishing touch.

Much of fruit ripening advice depends on ripening the fruit in a paper bag. The paper bag allows moisture to escape, so that the fruit doesn’t go mouldy, while still trapping the ethylene gas from the fruit that will speed up its ripening.

The fickleness of fruit fashion

Beauty is skin deep, people always say. Of course, we then ignore that advice in every practical judgement we make in our lives. Never is it more true, however, than when we bite into one of the picture-perfect fruits in our grocery stores: the beauty ends at the skin, and inside there is no taste. Even the beauty is getting boring: it all looks the same. The apples, pears and peaches could have fallen out of picture books. The same picture books. Yes, every season there is a new tropical fruit we haven’t seen before, but still it’s not as same as our own fruit, is it?

Part of the ennui is our fault, and part is owing to the farmers. On our side, somehow we decided that all fruit should look like it does in food magazine spreads. That fruit sold better off the stands, because we picked it out, so farmers were encouraged to do selective breeding of trees that emphasized looks. Little by little, the heritage types of apples — the ones that looked different or tasted different — disappeared from the store shelves, because they didn’t make runner-up in the beauty contest. We bypassed them completely on the shelf one year, reaching for the shiny apple, and the next year they were gone. The retailer didn’t order them in again; the farmer chopped down the trees and planted the shiny apple trees in their place to adjust to our buying habits.

While trying to keep up with our concerns and preferences about fruit, farmers also have to address their own needs so that they can stay in business. They try to choose and plant fruit trees that are resistant to diseases such as blight. If you’ve seen pears or apples with blight on them, it looks like someone took a pear off a tree, thumped it against a wall to bruise it, then stuck it back on the tree and let it rot and go brown in that spot for a few days. It’s not hard to imagine how a farmer would feel seeing a crop of half-ripe fruit start to develop this blight, tree after tree. The trees might have been a pear variety that a food writer got consumers excited about, but if the pears are just going to die on the trees, that doesn’t do the farmer or us any good.

The bottom line, though, whether it’s sad or just fact, is that the consumer is king (or queen), and that if you decide you are heartily sick of McIntosh apples and never want another bag of them in your house as long as you live, you ain’t going to buy them. Even if there were no other variety but McIntosh on the market, just because you don’t have a choice doesn’t mean you’ll buy that apple: you might buy oranges, or a bag of cookies instead.

What’s actually happening, though, is that we are buying apples: but other ones, often imported. The McIntosh producers no doubt are aggrieved that their current business has to change, as it isn’t going to be easy: you can’t just throw a new batch of seedling trees in the ground in April or May and get those new apples on the market stalls come September. This isn’t celery stalks you’re growing here, these are trees, trees that take years to grow, and on average an apple tree needs about 6 years of growing before you are going to get any amount of fruit off it.

That being said, the fruit producers may have brought some of this on themselves. It is entirely possible, and perhaps to some extent likely, that many of the “quality features” that producers say consumers prefer reflect instead what is best for the producer. And like all of us, when a thing that was too good to be true ends, there is no one more surprised than the person who was enjoying it most.

Another challenge that some fruit producers are facing is the segment of the market that is looking for organic fruit. Growing organic fruit can be a bit tricky in humid regions, where moulds and funguses can destroy a crop, leaving the farmer with nothing to sell that season.

According to Leviticus, a book in the Bible, fruit cannot be eaten unless it comes from a tree or bush that is more than 5 years old. (Leviticus 19:23 – 25.) That would make peaches of unknown origin risky (as a peach tree can produce fruit in two years), but cherries a safe bet (as the trees need at least 5 to 7 years before fruiting.) [2]Jacobs, A.A. The Year of Living Biblically. New York: Simon and Shuster. 2007. Page 172.

Praecocia non diuturna
The fruicte that soonest ripes, doth soonest fade awaie.
And that which slowlie hath his time, will not so soone decaie.
Our writing in the duste, can not indure a blaste:
But that, which is in marble wroughte, from age, to age, doth laste.
Even so it is of wittes, some quicke, to put in ure:
Some dull to learne, but oftentimes the slowe are sounde, and sure.
And thoughe the apte, and prompte: soone learne, and soone forget.
Yet ofte the dull doe beare in minde, what first therein was set.
Hereof the proverbe comes: Soone ripe, soone rotten turnes:
And greenest wood, though kindlinge longe, yet whottest most it burnes.
— Geffrey Whitney, Choice of Emblemes, #173. Leiden, 1586.