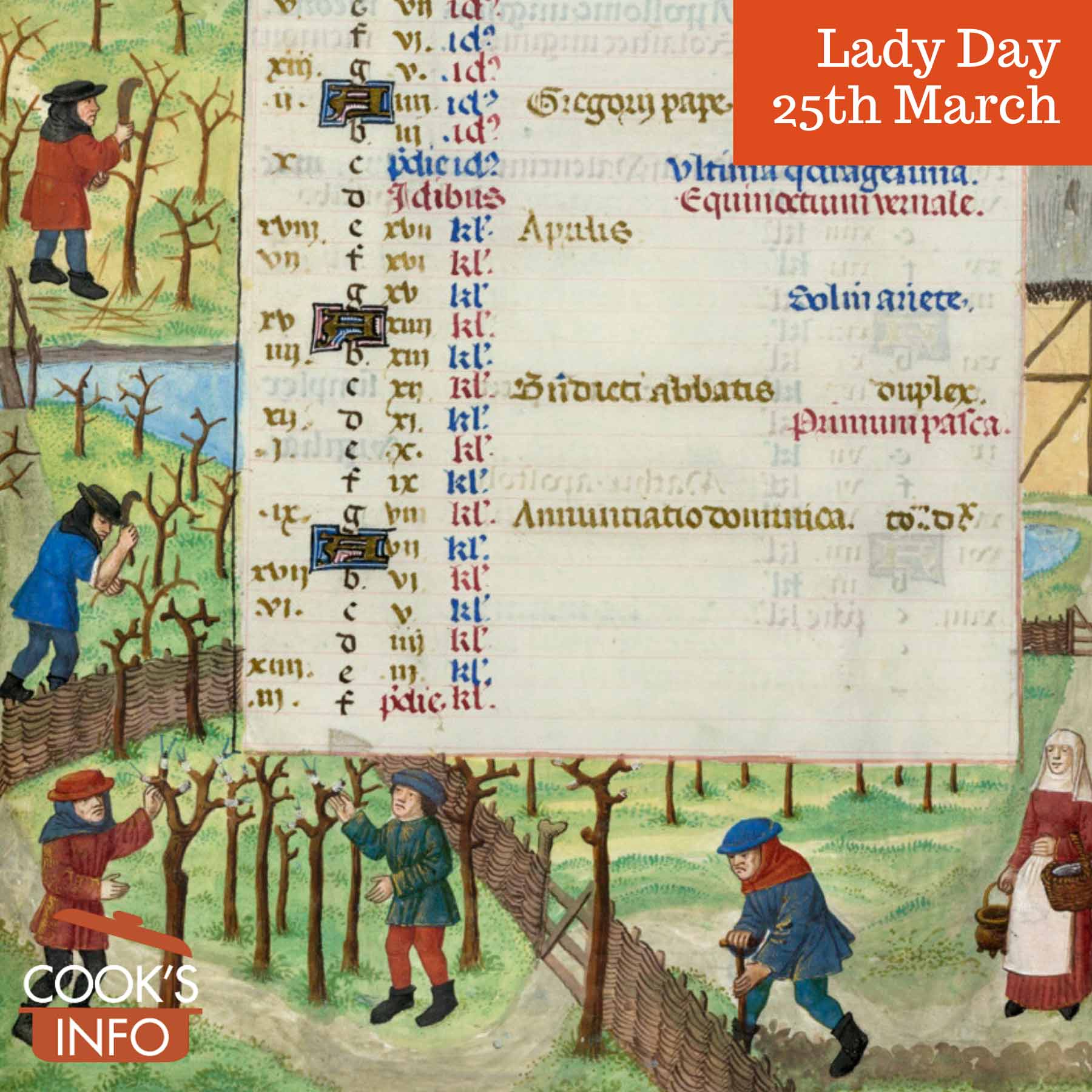 The 25th of March is Lady Day. It’s also known as the “Annunciation” in the Christian Church calendar.

It was an important day in the food and agricultural calendar.

Falling as it did during Lent, people would make a special effort to make what they were allowed to eat during Lent more interesting, as it was a “Feast” day on the Church calendar.

Up until England changed to the Gregorian calendar in 1752, Lady Day was considered to be New Year’s Day, because the year’s measuring system, A.D. (aka “Anno Domini”, “year of our Lord”), is technically supposed to be measured from the day Christ was first incarnated inside Mary.

Lady Day became the first of the quarter days in a year (marking the 4 quarters of the year), and thus was the fiscal, legal and liturgical beginning of the year. That’s why around this time of year many income taxes are still due, many government fiscal years end, etc.

Accounts were expected to be settled or at least recorded, and rents paid. Thus, for some governments today, their fiscal year end falls around this time still.

The fiscal year for Great Britain itself is 6 April to 5 April (the 6th of April is the 25th of March, adjusted for the 11 days that were skipped in the conversion to the Gregorian calendar.)

Eventually, though, everyone just found it easier eventually to count the New Year as starting from the start of the calendar year, 1st January. Many in England and Wales had already been celebrating the 1st of January as part of the Yule celebrations, and the trend accelerated after the calendar change of 1752.

In England, Wales and Ireland (Scotland was different) the year was divided into 4 “Quarter Days”:

In Sweden, today is also called “Maria bebådelsedag” (Maria Annuciation Day) or “Vårfrudagen” (The day of Our Lady.) Vårfrudagen, when mumbled or spoken sloppily, can even sound a bit like “Våffeldagen” (Waffle Day), and so indeed it has become Waffle Day  there. The religious meaning has faded in Sweden, but the waffles remain.

In England, if the day also happens to be Good Friday, as it is occasionally because the date of Good Friday varies wildly, it’s considered bad luck. There’s a saying, “If Our Lord falls in Our Lady’s lap, England will meet with a great mishap.” Consequently, observance of the day is then moved to the first Sunday after Easter Sunday (aka “Low Sunday”.)

This is also called the “Feast of the Incarnation”, because this being the day when Christ was conceived, it’s technically the first day he assumed flesh.

The annunciation is an event found in the New Testament of the Bible, in which the angel Gabriel visits Mary and tells her she will give birth to Jesus.  The angel said to her, “Hail Mary, full of grace, the Lord is with thee”, (in Latin, “Ave Maria, gratia plena, Dominus tecum.) Classical paintings of the Annunciation often show Mary being handed lilies by the Archangel Gabriel.

“And in the sixth month the angel Gabriel was sent from God unto a city of Galilee, named Nazareth,
To a virgin espoused to a man whose name was Joseph, of the house of David; and the virgin’s name was Mary.
And the angel came in unto her, and said, Hail, thou that art highly favoured, the Lord is with thee: blessed art thou among women.
And when she saw him, she was troubled at his saying, and cast in her mind what manner of salutation this should be.
And the angel said unto her, Fear not, Mary: for thou hast found favour with God.
And, behold, thou shalt conceive in thy womb, and bring forth a son, and shalt call his name Jesus.
He shall be great, and shall be called the Son of the Highest: and the Lord God shall give unto him the throne of his father David:
And he shall reign over the house of Jacob for ever; and of his kingdom there shall be no end.
Then said Mary unto the angel, How shall this be, seeing I know not a man?
And the angel answered and said unto her, The Holy Ghost shall come upon thee, and the power of the Highest shall overshadow thee: therefore also that holy thing which shall be born of thee shall be called the Son of God.
And, behold, thy cousin Elisabeth, she hath also conceived a son in her old age: and this is the sixth month with her, who was called barren.
For with God nothing shall be impossible.
And Mary said, Behold the handmaid of the Lord; be it unto me according to thy word. And the angel departed from her.
And Mary arose in those days, and went into the hill country with haste” — Luke 1:26-38.

“Lady Day” was also a nickname for the American singer Billie Holliday.