For a tested, safe home-canned version, see Marinated Mushrooms over on our home canning site. 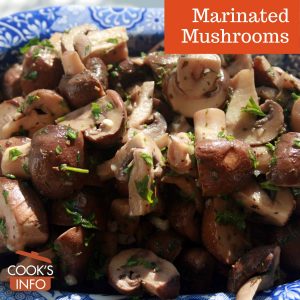 These marinated mushrooms have a fabulous lemony, garlicky, herby taste to them; they have a satisfying mouth-feel and are very moreish. You can quickly make the recipe up in a spare moment and have them on hand in the fridge throughout the week for a quick, healthy side to your meals. Great as part of a relish tray. It requires very little work time from you, but must be made starting at least 8 hours in advance as it requires marinating time in the fridge. This will keep for up to two weeks refrigerated in a tightly-sealed container. These are far better than commercially-bought ones. They taste fresh (without that chemical taste), are far less expensive, are far less fattening, can be salt-free, and you know what's not in them. We used a pressure cooker to speed the cooking and concentrate the flavours. Makes 4 cups (675 g / 17 oz) approximately. 1/2 cup = @ 60 g.
Print Recipe Pin Recipe
Prep Time 20 mins
Cook Time 15 mins
Total Time 35 mins
Course Relish, Salads, Skinny Food, Starters
Servings 8

If you bought really small button mushrooms, then use them whole. Instead of white pepper, you can use black pepper. If you don't have all the herbs mentioned, think of them as a suggestion list and swap to suit your tastes / what you have to hand. We used a salt substitute instead of salt to reduce added sodium. We used plain, standard North American style white vinegar to give a tang. You could also use white wine vinegar instead for less of a tang. If it's the middle of winter and there's a raging blizzard going on outside, don't hang yourself for using a tablespoon of dried parsley instead of the fresh. This, though, is the kind of recipe where it actually, for once, makes it worth the effort to use fresh parsley, especially in summer. After you've made these marinated mushrooms once, you can adjust the flavouring in the recipe to your taste. Some might prefer more garlic, some less, etc. Be wary of increasing the parsley as it could take over the recipe. Adding more oil will make the recipe more fattening but not necessarily add anything to the taste.
Tried this recipe?Let us know how it was!
Previous Post: « Carrot and Turnip Mash
Next Post: Pickled Beets, Sour Cream and Dill Salad »
Tagged With: Mushrooms