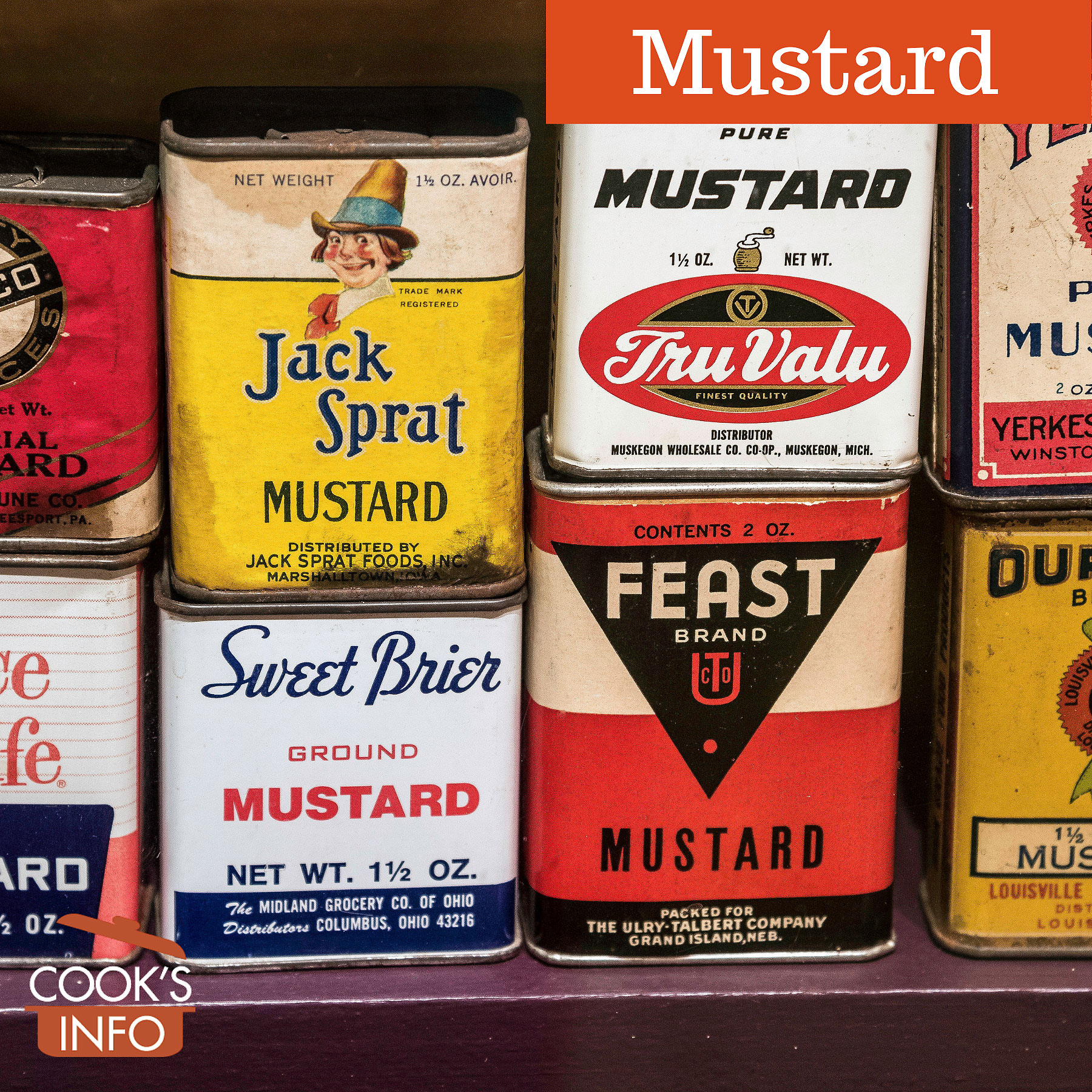 Mustard is a spreadable condiment whose taste can be anywhere from mild and subtle, to tart, to nasal-clearing hot. The colour of the condiment will range from pale yellow to bright yellow to brown. It is made from mustard seed.

Mustard seed refers to the seed of the plant which can be bought whole, ground into a powder, or already made into the prepared mustard.

Dry mustard is ground mustard seed; you will also see it referred to as mustard powder, ground mustard, and occasionally, mustard flour. At home, you won’t be able to grind mustard seeds to as fine a powder as can be done commercially with special mills. For better results than you would get otherwise, soak the seeds first in water before grinding them in a grinder or food processor.

Mustard greens refer to the leaves of the plant, which are also edible as greens. 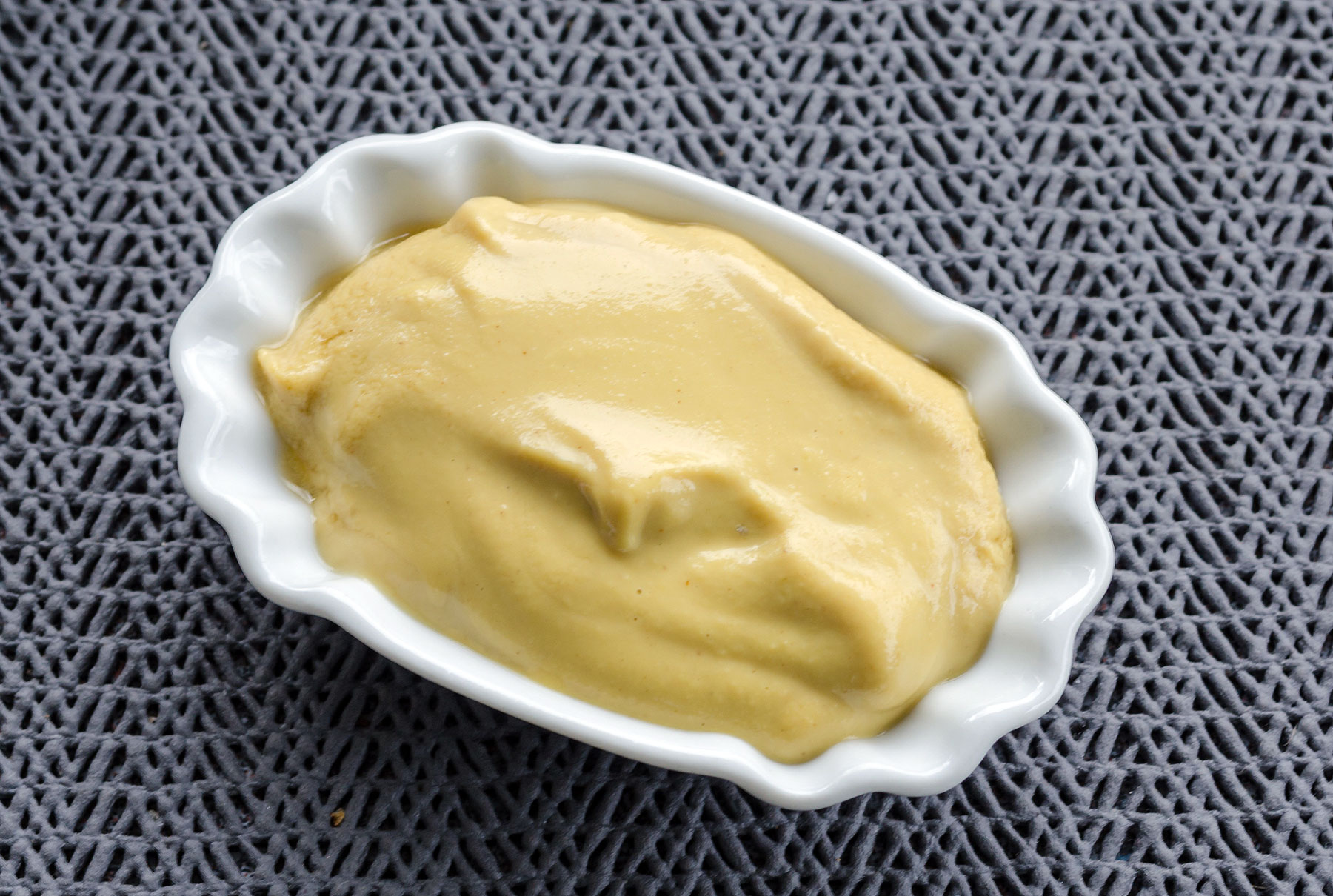 The condiment made from mustard seed is referred to technically as “prepared mustard” to help distinguish it from other parts of the mustard plant, such as the seed (either whole or powdered) or the leaves.

In making prepared mustard, you first crush the seed into a powder. The powder can be sieved to remove the hulls to make a fine, smooth mustard, or the hulls can be left in if a coarse mustard is being made. The taste of mustard is only really released when it is mixed with cold water. When moistened, two compounds in mustard powder (myrosin and sinigrin) are combined to form mustard oil. You let this flavour develop for about 10 to 15 minutes. At that point, you add a bit of vinegar which acts as a “fixative” to stabilize taste when it has reached the right amount of “heat.” The acidity does this by stopping the enzyme reaction that is occurring. Cold water should be used, not hot, as hot water makes it bitter and dulls the pungency. When making mustard, don’t use anything aluminum as the metal will interact with the mustard and give a bad taste.

Turmeric is often added to prepared mustard to augment the yellow colour.

Instead of buying many jars of differently-flavoured prepared mustard, you may wish to consider buying one or two plain jars, and to small amounts of it add the flavouring yourself — such as honey, etc — as you need it.

Mustard in sauces acts as an emulsifier. If you are adding mustard to sauces, do so almost at the end of cooking as cooking heat will reduce the flavour of the mustard. 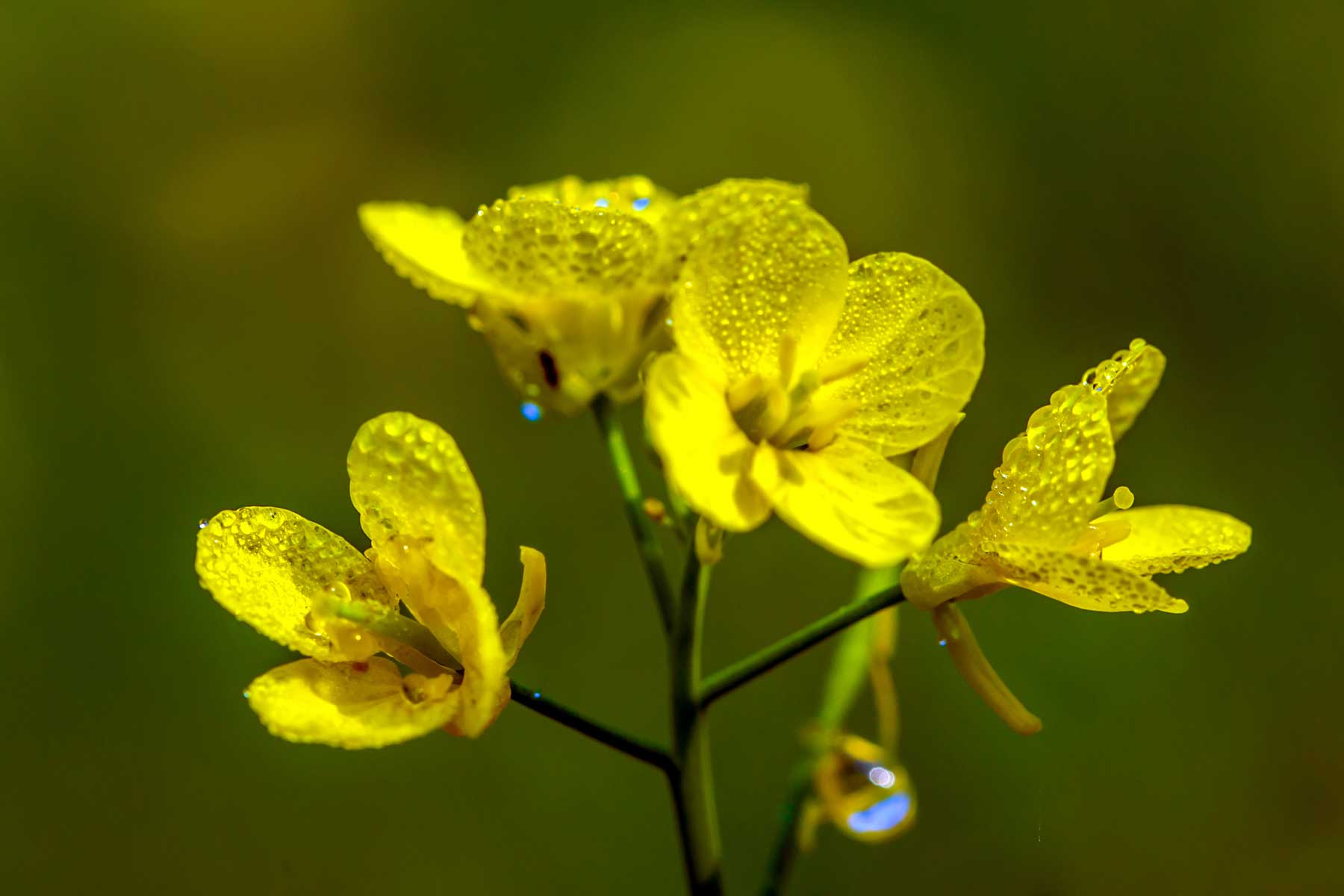 If mustard is present as an ingredient in an item produced in the EU, it must be specifically declared as an allergen on the package labelling. [3]EU Food Information Regulation No. 1169/2011, passed on 13th December 2014.

In the US, mustard is not included as an allergen in The Food Allergen Labeling and Consumer Protection Act, and could be buried in the ingredients list under a mention of “spices” or “flavoring”:

“It is also important to realize that sesame, mustard and molluscan shellfish, such as oysters, clams, mussels or scallops, are not required to be labeled as a major allergen under FALCPA. They are required for labeling in Canada. However, even in United States, these foods must be declared on the ingredient list if they have a technical or functional effect in the product with the exception that they can be hidden in terms such as flavorings on occasion. They cannot be identified in the “contains” statement so consumers must look for them in the ingredient list.” [5]Moore, Andrew. Food Labels: Read it before you eat it. American Academy of Allergy Asthma and Immunology. 16 January 2019.

Prepared mustards should be refrigerated after opening.

The Greeks and Romans used mustard both as a condiment and a medicine. They even made mustard plasters. Mustard plasters work because the mustard oils irritate the skin, drawing blood to the surface, and relieving deeper inflammations.

The Romans mixed ground mustard with mustum (unfermented grape juice not aged to become wine), though not everyone ate it; to a lot of Romans, it was more medicinal.

After the Romans, Europe lost the habit of making prepared mustard. Mustard seeds were just put on your dinner plate, where you crushed and mixed them yourself with water and vinegar; this would have been a very coarse mustard.

Mustard makers started to re-appear in the 1200s. Mustard laws were enacted in several jurisdictions in the mid 1500s to ensure the purity, and then in 1658 additional laws in Britain gave a monopoly to mustard makers.

Mustard was very popular because the cracked seeds could give a kick to food like black peppercorns can. But unlike peppercorns, which were expensive and exotic and imported from somewhere in the east, mustard plants would grow like weeds anywhere and would therefore accessible to everyone. In fact, mustard took a dive in popularity in the early 1700s when, owing to expanded trade, black peppercorns started to became more broadly accessible.

In 1877, Heinz added mustard to its product line. Henry Heinz imported his own mustard seeds from England, France and Italy and built his own mill to grind them. The mustard was sold in barrels, wooden buckets, and crocks. In addition to yellow mustard, they also introduced a brown, sweet-and-sour version they called “Düsseldorf mustard.” Owing to its popularity with German immigrants to America, Heinz was able to sell it for twice the price of the yellow mustard. [6]Skrabec, Quentin R. H.J. Heinz: A Biography. Jefferson, North Carolina: McFarland, 2009. pp 72 – 73. 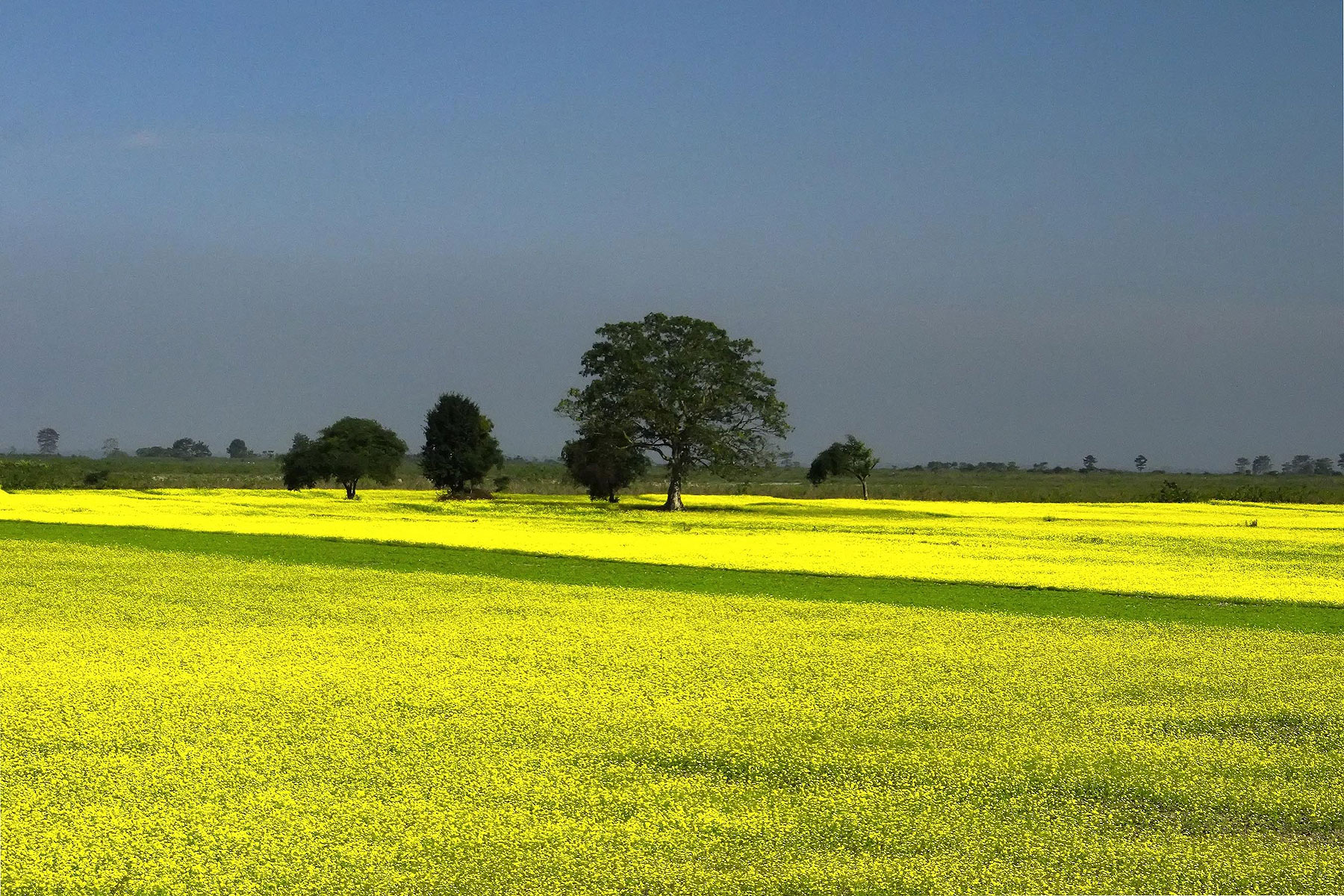 Pope John the 22nd, who was pope in Avignon from 1316 to 1334, created a special position for his personal mustard maker. It was called “le premier moutardier papal” — or the pope’s primary mustard maker. In good Church tradition, he of course appointed a nephew of his to the position.

Though the position has disappeared, it is remembered in French in the phrase “Il se croit le premier moutardier du pape” which means “he thinks himself the pope’s primary mustard maker”. The expression is used for someone who puts on airs and has a very high opinion of himself for the sake of something quite trivial and ludicrous.

There are three theories on where our word mustard comes from:

1) From the Latin words “must” from mustum (unfermented grape juice), and “-ard” from ardens, meaning burning;
2) The “-ard” comes from a Germanic suffix “hart” meaning strong, intense or hard;
3) From the Celtic word “mwstardd”, which apparently means something that gives off a strong smell.