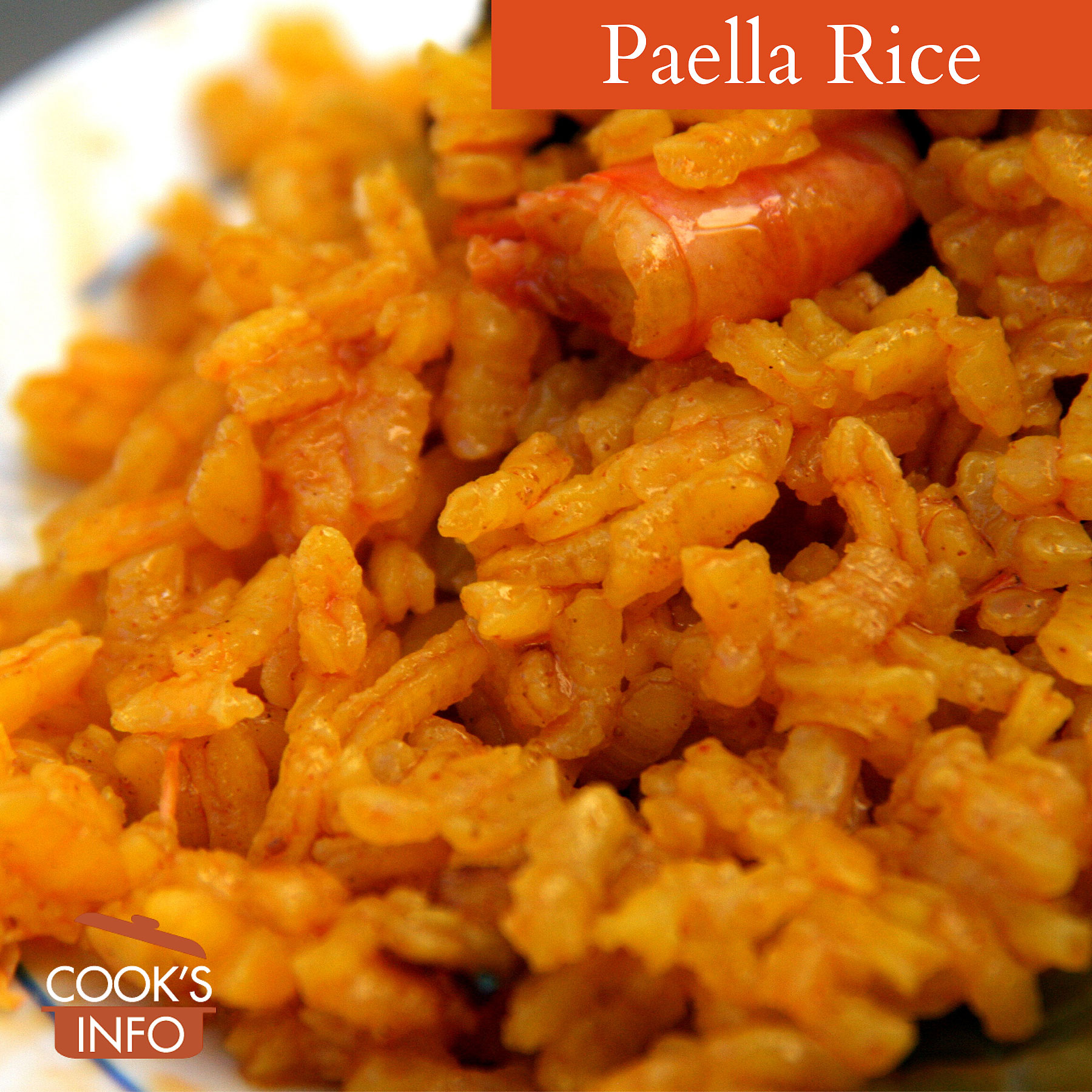 Paella rice is a category of rice, rather than an actual variety or cultivar. The term indicates rice that is good for use in the Spanish dish known as “paella.”

What is paella rice

Paella rice will have roundish, medium-short grains with a high starch content, so that it sticks together somewhat, but can still be easily separated. These grains have the ability to absorb liquid (and therefore flavour) without the structure of the grain breaking down. The central core of the rice grain remains firm, but tender. After cooking, rice in paella shouldn’t be creamy as in risotto, but rather separate and dry.

Paella rice is polished to make it white; the Spanish haven’t really ever taken to brown rice.

Five of the rices used as Paella Rice have Spanish “Denominación de Origen” (“DO”) status. Bahia, Bomba and Senia from Valencia, and Ballila Sollana (Calasparra Rice) and Bomba from Calasparra.

There are many brands of ordinary paella rice available: brand names include Dasca, Matiz and Goya.

Most Paella Rice is grown in three areas of Spain: Valencia, Calasparra and the northeastern delta of Ebro. In Valencia and Ebro, the rice is grown in protected bird sanctuary areas.

While virtually all the paella rice grown in Spain is cultivated at Valencia, the best (and most expensive) is considered to be the rice grown in the Spanish province of Murcia: Bomba and Calasparra Rice. Bomba is an actual variety of rice, as mentioned above. The rice known as Calasparra is actually the variety of Balilla grown under special conditions, and therefore costing two to three times more than Balilla rice grown elsewhere in Spain. (See the entry on Bomba rice for more information on both.)

The term “Valencia rice” is often used synonymously with paella rice. It isn’t quite synonymous. “Valencia rice” is a geographic term. Most rice grown there is, it is true, destined for use as paella rice, but it can also be used for other things, and there’s nothing saying that a grower in the Valencia area might not decide to grow a long-grain rice that isn’t suited for paella.

Not long-grain rice. Another short-grain rice such as risotto (aka arborio or Carnaroli) rice, though that leads to creamier results.

The rice grown at Valencia is largely centred on the Albufera side of the city. It used to be a bay, and used to be much bigger. Now the bay is just a tenth of the size of what it was under Roman rule. Today it is separated from the sea by a sandbar, with several small canals letting sea water in. The bay is not very deep; it varies from .5 to 2 metres (20 to 80 inches deep ), with an average depth of 80 cm (30 inches).

Rice production is centred there because prior to 1238, when Valencia was much smaller, the rice fields were all around the city. Mosquitoes that bred in the rice paddies carried malaria into the city. King Jaime I ordered rice production to be moved to the bay, further away from the city (though now of course the city has grown and is only 10 km (6 miles) from the Albufera region, which was declared a national park in 1986 to protect it.

The entire area is crisscrossed with man-made canals to irrigate the paddies.

This web site generates income from affiliated links and ads at no cost to you to fund continued research · Information on this site is Copyright © 2023· Feel free to cite correctly, but copying whole pages for your website is content theft and will be DCMA'd.
Tagged With: Paella Rice, Spanish Food