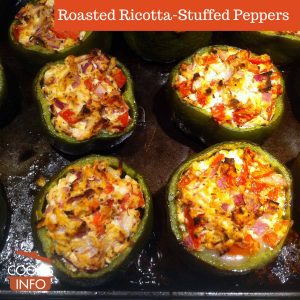 As stuffed, roasted peppers go, this is one of the easier recipes, and the ricotta cheese stuffing makes for a nice change from the usual stuffing of rice. Plus this is a rare, healthy stuffed pepper recipe: it's low-fat, low-sodium, low-carb -- but BIG on flavour and "fillingness." Feel free to mix up the colours of the bell peppers you use -- red, orange, yellow, green, etc. Allow two pepper halves per person along with a chop or a chicken breast and maybe one other veg; 1/2 per person if you're serving with several other things. This is low enough on prep time that it's practical for a weekday night. The recipe is easily doubled.
Print Recipe Pin Recipe
Prep Time 25 mins
Cook Time 45 mins
Total Time 1 hr 10 mins
Cooking Temperature 180 C / 350 F / Gas Mark 4
Course Vegetables
Servings 4

Tip! If you feel you want more liquid for the sautéing, try a splash of wine (white or red), some cooking spray, or some broth or stock. Tip! Make the filling mixture up to a day ahead.
Tried this recipe?Let us know how it was!
Tagged With: Green Peppers, Red Onions, Ricotta Cheese, Tomatoes