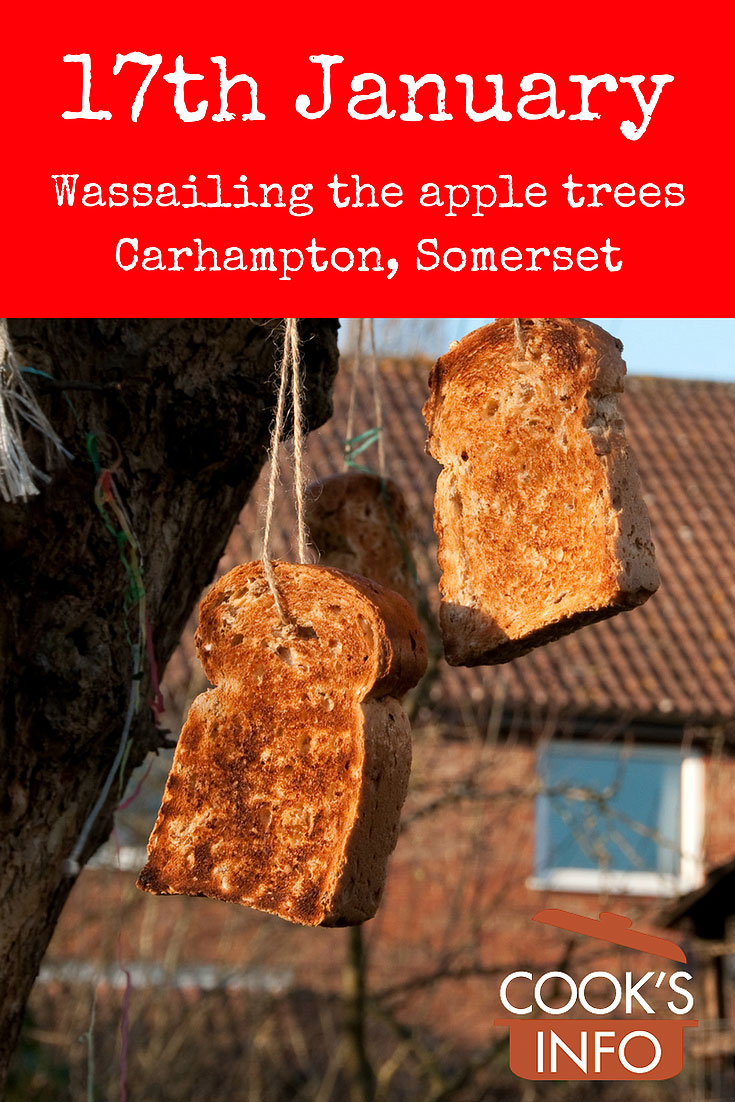 The 17th of January is a night for wassailing apple trees.

Tonight, apple trees will be wassailed in Carhampton, Somerset, as part of a centuries if not millennia old tradition of wassailing across England. The festivities take place in an orchard next to the Butcher’s Arms pub.

After Christmas and New Year were over and the dark, cold nights of winter had set in, wassailing provided a fun evening and a time for revelry. Traditionally, it was mostly done by men in high spirits who had literally gotten into some high spirits themselves.

A wassail bowl full of cider was carried out to the orchard, in addition of course to the cups that the men carried for themselves. You didn’t wassail every tree in the orchard; you picked the oldest one and gathered around it. A piece of toast made from white bread would be dipped in the wassail bowl, and placed either on the roots or in the branches of the tree to attract good spirits. One of several possible wassail songs would be sung, sometimes several times as the crowd got into the swing of things. Then, the cider in the wassail bowl would be poured over the roots of the tree, and the men would truck back to the house for more fun and merry-making.

It was recorded in Kent in 1585 as being done by the teenage men of the villages. In Devonshire, the tradition was that when the men came back to the house, the women would have some special type of meat roasting for the men as suited this festive occasion. Whatever the weather, though, the women wouldn’t allow the men back into the house until they could guess what it was the women were roasting. The man who finally guessed would get the choicest piece that year, and, no doubt, the gratitude of his fellow wassailers for gaining them admission if freezing rain had been coming in sideways.

In other traditions, people or animals were wassailed.

History of the date

In the old, Julian calendar, wassailing of apple trees used to be done on Twelfth Night, January the 6th.

On Wednesday, 3 September 1752, the calendar was advanced by 11 days, so that suddenly, it was the 14th of September in the Gregorian calendar, and in the following year, the 6th of January became the 17th.

In some parts of England, such as West Sussex, wassailers have stuck with the date of January 6th (“Old Twelfth Night”), keeping wassailing part of Twelfth Night festivities.

A search (as of 2021) of newspapers in the British Library online newspaper archive results in no hits for wassailing in Carhampton in the 1700s and 1800s.

In 1904 a mention appears of wassailing taking place in Carhampton, Somerset.

The next mention of wassailing in Carhampton is not until 1927:

“Most of the customs of former times have died out, and few people in the West now observe the once common practice of ‘wassailing’ the apple trees on the eve of Old Twelfth Night. It seems a pity it should have gone, for it was a means of merrymaking and good-fellowship, like the ‘cutting of the neck’ in harvest time and the jollification which followed the bearing home of the last sheaves of corn. All such things seem to have lost any significance they formerly had, for the schoolmaster has been abroad and old things have passed away.

Last night’s festivity at Carhampton may not have been the sole celebration of ‘wassailing’, but it is spoken of as a revival rather than survival, so we can hardly expect to hear of many others. It appears to have had the virtue of conforming strictly to tradition, not only in adhering to the right date, but in the manner of its performance. We hope the trees which received their tribute of cider will respond to the appeal made to them and yield fruit in abundance. Then there will be a chance of other places following what is to be regarded as the good example set by Carhampton in looking both to the past and the future.” —  Notes in the West. The Western Morning News and Mercury. Tuesday 18 January 1927. Page 5, col. 1.

A Yorkshire newspaper covering the event outlined the rituals involved:

“The time-honoured ceremony of ‘Wassailing’ the apples trees, an ancient custom that is dying out in rural Somerset, was carried out by the villagers of Carhampton last evening, when the orchards in the vicinity echoed with their wassail song appealing to the trees for a lusty crop next season: ‘hats full, caps full, big bushel bags full, and a little heap under the stairs’, as the old song runs.

The ceremony has always been performed in Somerset on the even of the old Twelfth Night, now January 18, and it is accompanied by much cheering, shouting and gunfiring, and a little cider drinking. It is recorded that the farmers were so hospitable on one occasion that when the revellers reached the last farm on the list they were in such a condition that they solemnly ‘wassailed’ a lilac tree in mistake for an apple tree!

There was no such incident at Carhampton yesterday evening, when the merry bands of farm labourers and a village blacksmith set out for a neighbouring orchard. They made a circle round the largest tree, sand ‘wassail’ songs, cheered and fired guns in the air. The host provided a large bucket of cider, into which they dipped cups, and a piece of toast soaked in the same beverage was placed in the fork of the tree for the robins.” [1]Yorkshire Post and Leeds Intelligencer. Tuesday 18 January 1927. Page 9, col. 6.

Another newspaper report notes the 1927 Carhampton wassailing as a revival, rather than a continuation:

“Considerable publicity has been given to the revival of the wassailing of apple trees ceremony at Carhampton in Somerset, on the eve of Old Twelfth Night. A custom that was once general through the country, it is now practically extinct, save for occasional revivals such as those which have just taken place at Carhampton…” [2]Notes of the day. Exeter and Plymouth Gazette. Thursday 20 January 1927. Page 4, col. 2.

After 1927, newspapers carry mention of the Carhampton wassailing nearly every year, even during the Second World War.

Here’s a discussion of wassailing from 1927:

“Considerable publicity has been given to the revival of the wassailing of apple trees ceremony at Carhampton in Somerset, on the eve of Old Twelfth Night. A custom that was once general through the country, it is now practically extinct, save for occasional revivals such as those which have just taken place at Carhampton and at Rull Farm, Whimple. In the South Hams it was once customary for a “farmer, accompanied by his workmen, with a large pitcher of cider” to go “to the orchard, and, there encircling one of the best bearing trees, they drank the following toast:

This toast has been recorded before, but it loses none of its interest by being given again. There are numerous variants of the toast. In another part of Devon it was rendered thus:

While according to Herrick’s “Hesperides” the ceremony was made to embrace the plum and pear trees as well:

“Wassail the trees, that they may beare
You many a plum and many a peare;
For more or lesse fruits they will bring,
As you do give them wassailing.”

The version of the old rhyme given at the Whimple celebration was as follows:

In conversation recently with an old farmer living on the borders of Dartmoor, I learned that some years ago he, with a number of his employees, sprinkled an apple tree with cider on Twelfth Night, and was rewarded by a bumper yield from that particular tree in the following season.” 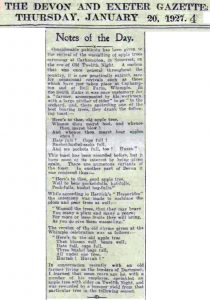 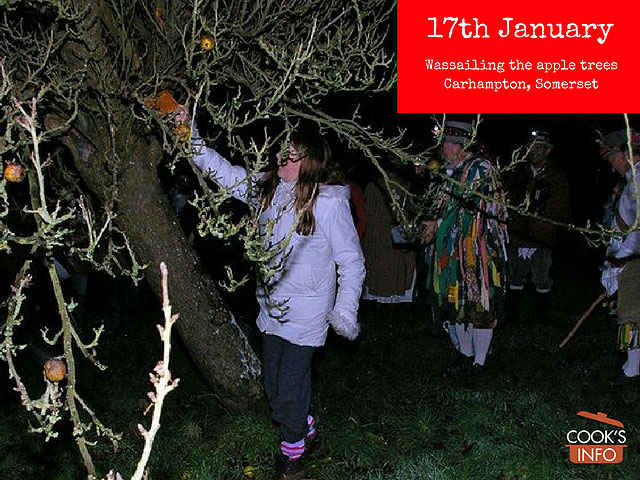 “Wassail” means “good health”. It comes from the Anglo-Saxon words “Wes” (“good” or “well”) and “Hael” (“health”). In Sussex, some used the term “howling” the orchard, which may have reflected on the quality of the singing after several good pints of cider by the farmers.

This web site generates income from affiliated links and ads at no cost to you to fund continued research · Information on this site is Copyright © 2023· Feel free to cite correctly, but copying whole pages for your website is content theft and will be DCMA'd.
Tagged With: Cider