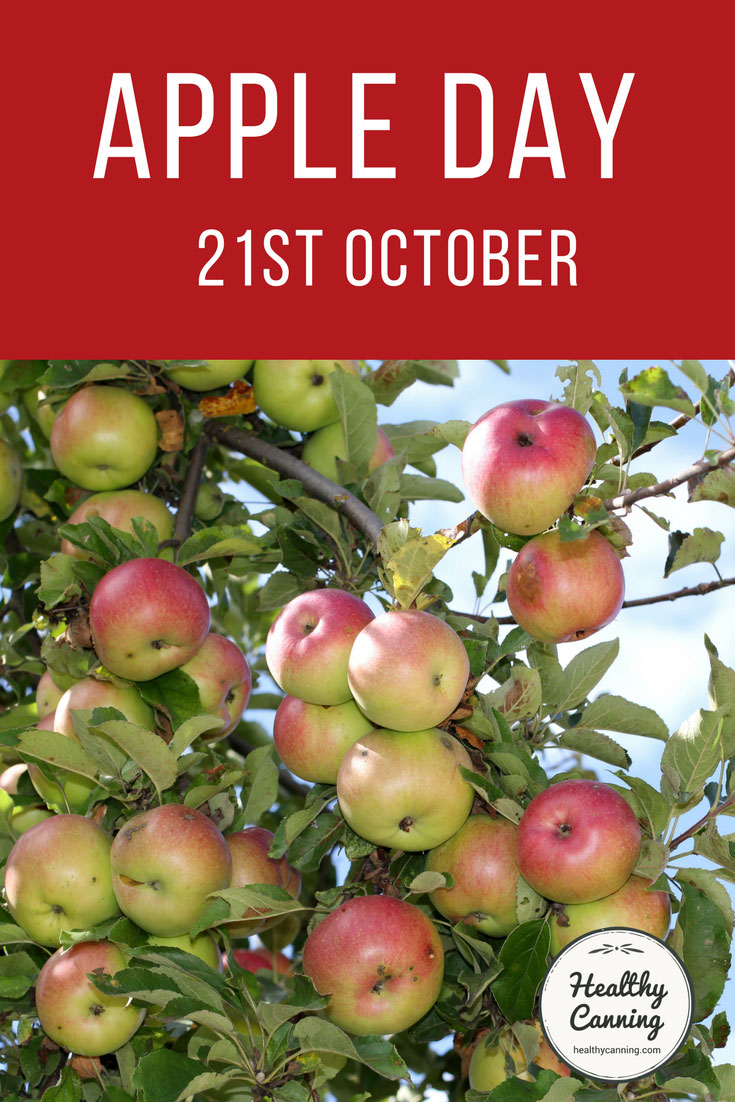 The 21st of October is Apple Day.

Apple Day is celebrated every October in England, and is now catching on elsewhere as well.

“Doctors’ surgeries, coronary support groups, and the Cancer Research Campaign have taken Apple Day as a novel way of encouraging healthy eating. Each year, alongside tasting, juicing, baking, pruning and grafting, an imaginative array of games and creative activities have flourished – ranging from simple apple printing to mummers’ apple plays, new songs and poetry evenings. But invariably, year after year, the most popular event is the display, tasting and buying of numerous varieties of apples and the presence of an expert to aid identification.” [1]Sue Clifford and Angela King. Common Ground. Accessed October 2021 at https://www.commonground.org.uk/apple-day/ 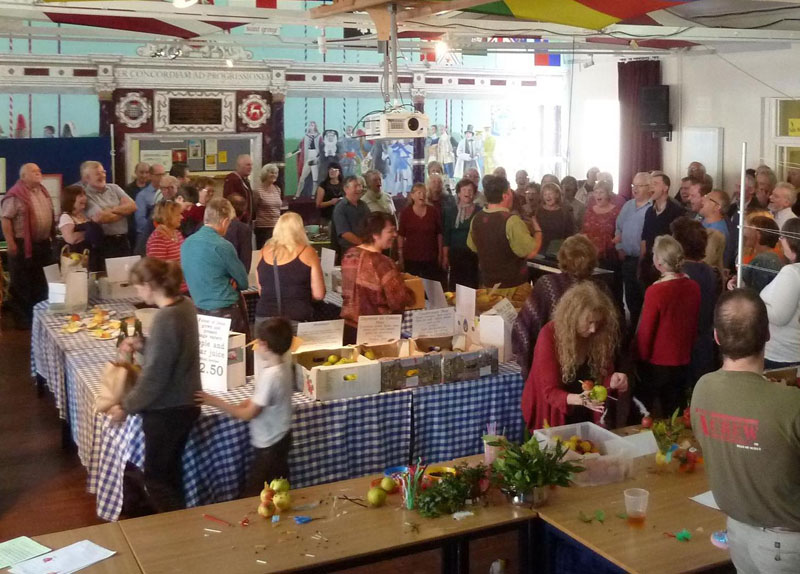 Events today may include:

A song dedicated to Apple Day was recorded by a Christian gospel group named “Harbour Lights” on their album “Leaving Safe Anchorage”.

Leaves were falling,
Like the dreams around my feet,
As I was driving on the lonely one-way street,
When I saw a poster on a wall,
Tried to read what it was saying,
It said,

‘Cause I was thinking,
That’s exactly what I need,
And started thinking,
How faith and my life meet,
With faith forgiveness is the key,
Do we ever really know it,

Come and meet me down at Apple Day,
Come and bring the fruit that’s fallen,
We’ll turn it into something new,
A gentle truth is calling,

Calling, calling,
All was changing,
On this landscape I can see,
A rearranging taking place inside of me,
Not a message from a burning bush,
But a quiet change of season,

Meet me down at Apple Day,
Come and bring the fruit that’s fallen,
We’ll turn it into something new,
A gentle truth is calling.

Above video: news coverage of the very first Apple Day in 1990 from Common Ground Cinema on Vimeo.

“The aspiration was to create a calendar custom, an autumn holiday. From the start, Apple Day was intended to be both a celebration and a demonstration of the variety we are in danger of losing, not simply in apples, but in the richness and diversity of landscape, ecology and culture too.” [3]Sue Clifford and Angela King. Common Ground. Accessed October 2021 at https://www.commonground.org.uk/apple-day/

Cromford, Derbyshire, England, has been an enthusiastic celebrant of Apple Day since 1995:

“The longest-running Derbyshire-based event is Cromford Apple Day, which first took place in 1995 and was initially organised by Scarthin Books, the village’s legendary independent and second-hand booksellers. In the past decade the running of the event has been taken over by Celebrating Cromford, the village community organisation, but still takes place in the shadow of the bookshop.” [4]Bradley, Richard. Apple Day – a look at the autumn tradition in Derbyshire. Cheltenham, Gloucestershire: Great British Life. 18 October 2020. Accessed October 2021 at https://www.greatbritishlife.co.uk/food-and-drink/apple-day-derbyshire-6522030

The history of Apple Day in the United States

The United States had a National Apple Day at the start of the 1900s. The first year may have been 1904:

There seems to have been an Apple Day in 1904, as part of the Louisiana Purchase Exposition:

“American Apple Day. The American Apple Growers Congress will celebrate Apple Day at the Louisiana Purchase Exposition at St. Louis. Mo. on October 4, 1904 for the purpose of increasing the use of apples as a food and to advertise the apple growing section of America. The Apple Growers’ Congress, in cooperation with the department of horticulture of the exposition, has arranged a plan of distributing apples to all who attend the exposition grounds on that day, so that due credit will be given to those who furnish apples for distribution. This plan affords an excellent opportunity for all growers of high grade eating apples to advertise their stock by bringing their own product directly to the consumer.” — West Plains, Missouri: West Plains Howell County Gazette. Thursday, 29 September 1904. Page 1, col. 4.

In 1905, a number of apple producer organizations designated the third Tuesday in October as Apple Day:

“Prof. W.H. Olin writes urging the larger consumption of this fruit to benefit the grower — James Handley, of Quincy, Illinois, deserves the title of Father of National Apple Pie (sic) Day. When he was secretary of the Mississippi Valley Apple Growers association, he urged the setting aside of one day in October as a special day when we should pay tribute to the American apple. In 1905 a number of horticultural organizations, as well as the International Apple Shippers’ association, joined with Mr Handley and named the third Tuesday in October as Apple Day. By 1913 this day was being celebrated from Maine to California, from Rochester to Baltimore and Galveston.

At the 1920 convention of the International Apple Shippers’ association, National Apple Day was changed to the last day in October — Hallowe’en, as it is known to us all.

The principle of the celebration is to give publicity to the greatest fruit in the world, to widen its distribution, to increase its consumption, to contribute thereby to the maintenance of our productive orchards, to bring wealth, happiness and good cheer to the people of this entire nation…

On Apple Day let every man, woman and child in Colorado pay tribute to America’s best food by eating a baked apple at breakfast, apple sauce at the midday meal, and either apple pie or apple dumpling for the dinner at night, with a rosy Jonathan, a Delicious or a Grimes Golden apple to be eaten ‘between acts’ during the day.” — Olin, W.H. Uncle Sam’s Apple Crop Largest in the world. Grand Junction, Colorado: The Daily Sentinel. 24 October 1922. Page 5, col. 2.

The day in the U.S. seems to have died out at some point. Perhaps it got lost in the merger with the behemoth that Hallowe’en would become.

In recent years, the holiday has been resurrected, using the 21st of October date from England. 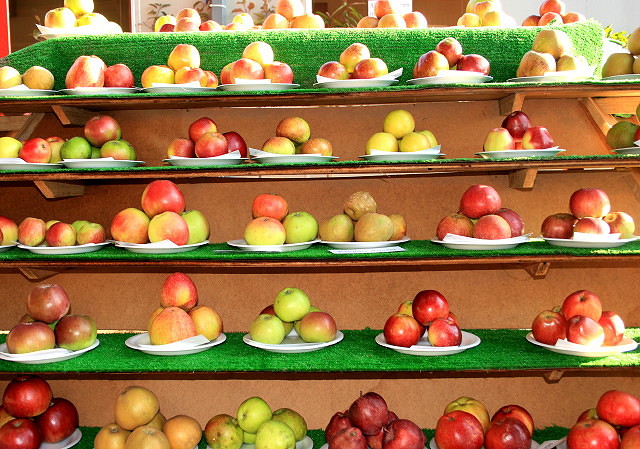