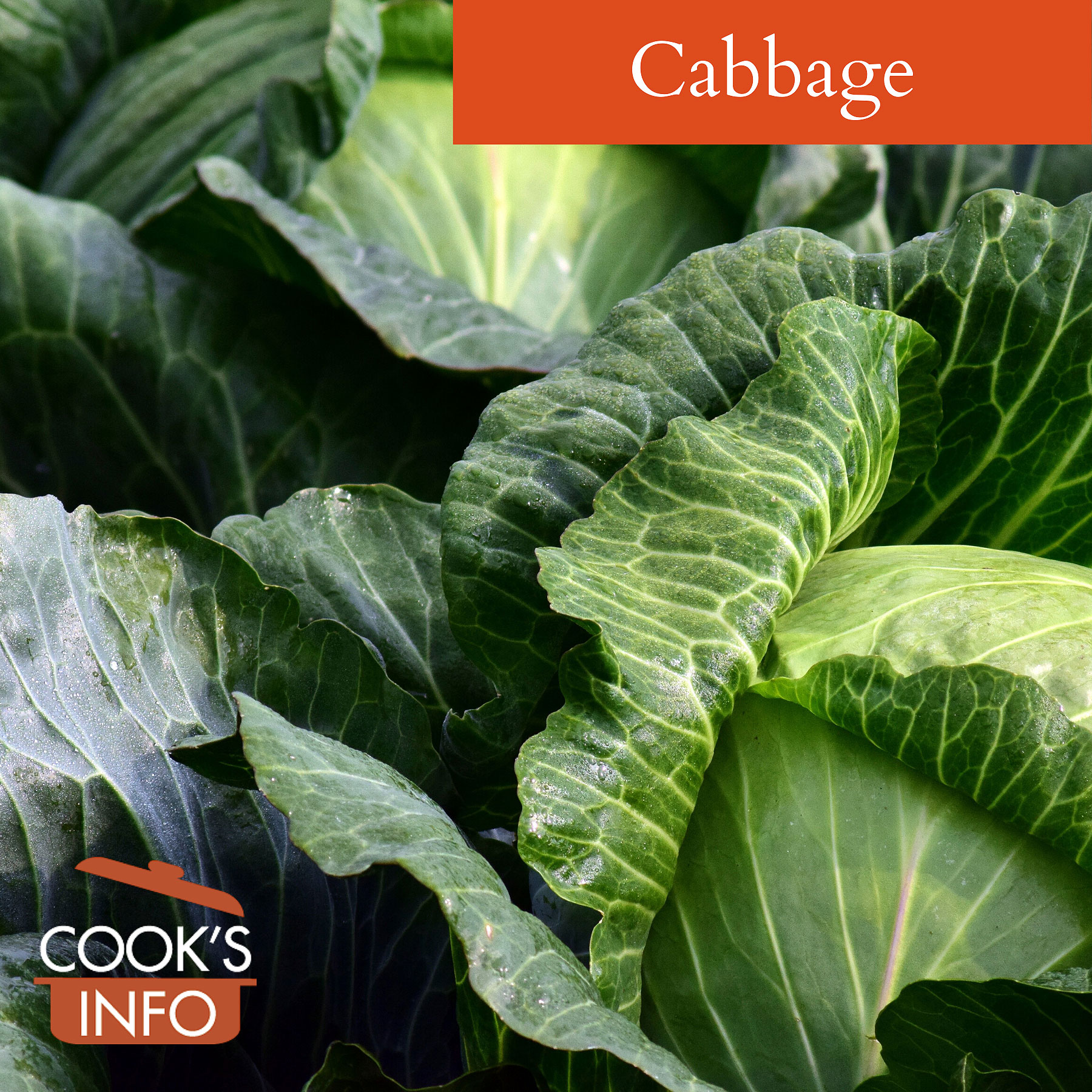 Cabbage is a leafy plant with a short stem. The leaves can be pale or dark green, or purple / red. The leaves generally form a compact sphere in the centre.

In cooking, cabbage is used as a vegetable in savoury dishes. It can be eaten cooked, raw, or pickled.

It is a biennial plant (for eating, it should be harvested in first year.)

Not all cabbages form heads. There are many varieties now, some of which are loose-leafed. The various varieties allow a range of harvest times throughout the growing season.

A member of the brassica family, it is thought by food historians to in fact be the first member of that family to have been cultivated.

In traditional North American cooking, cabbage is generally either eaten raw in coleslaw, or cooked using its leaves to wrap cabbage rolls. This could be the result of really only having one, rather dull variety of cabbage available — white cabbage. The culinary usage of cabbage, though, is evolving in recent years as other varieties become available and other cuisines become more popular. In the UK, cabbage is often sautéed or braised to act as a side vegetable which gives you a hot, cooked side veg while also giving you the crunch and most of the nutrition of fresh cabbage.

When buying, choose heads that are crisp, firm and well-coloured for their variety.

Red cabbage and savoy cabbage used to be only well-known in the UK and Northern Europe, but are now slowly gaining familiarity in North America.

Red cabbage and green cabbage have the most taste; unfortunately, the predominant one in North America is white cabbage, which is really good just for coleslaw and sauerkraut. This may be one of the reasons North Americans still aren’t keen on cabbage, as in their minds it’s the flavourless, uninteresting white cabbage.

Generally, the darker green the cabbage the more bitter and strong the taste – witness kale and cavolo nero. Medium-coloured ones are milder. Red and white cabbages are sweet by comparison with all the rest.

To peel the leaves off a cabbage, cut out and remove the core at the bottom of the cabbage first. Each leaf will then remove easily from where it had been attached at the base.

When shredding cabbage by hand, quarter it first, and cut out the core. Press each quarter down flat and cut with a large knife. To crisp up shredded cabbage, soak it in ice water with salt for about 15 minutes, then rinse and drain.

Compounds in cabbage break down as it is cooked and recombine to form smelly molecules which include hydrogen sulfide (think rotten eggs). The longer it is cooked, the more of these molecules are produced, and the taste of the cabbage actually gets stronger. Keeping the lid off during cooking also helps to reduce the smell, because then the sulphur release doesn’t build up and compound in the pot. (Another thing that seems to work, some people suggest, is adding a bay leaf or a tidge of French vermouth to the water.) A shorter cooking period for members of the cabbage family is consequently good for both the taste and smelling senses, with the added bonus that fewer nutrients are lost.

A good way to cook boiled cabbage: shred the cabbage, boil in an uncovered pan. When it floats to the surface and is wilted, drain, dump out the water, then return to the pan with a tablespoon of butter or fat, and reheat.

Red cabbage will keep its colour when boiled if you add a bit of vinegar or lemon juice to the water.

To store fresh, a whole head of cabbage kept together keeps better than if you separate the leaves and store them loosely. Don’t wash when refrigerating; wash only as you use it. Store in plastic bags in refrigerator for up to two weeks.

Cabbage that is frozen can only be used as a cooked vegetable afterward.

These directions are from the manual for the Excalibur dehydrator, 2012:

“To dry: Wash cabbage, remove outer leaves. Cut the head in half, core, and shred into ⅛ inch (3 mm) strips with a grate. The consistency should be a little thicker than that used for coleslaw. Steam blanch 2 to 3 minutes over water. Dehydrate cabbage at 125 F / 52 C until brittle. Cabbage reabsorbs water easily, so it must be thoroughly dry to keep well. Particularly check the spine section as it will dry more slowly than the thinner leaves.” [2]Excalibur. Preserve it naturally. Sacramento, California. 4th edition, 2012. Pp 26 and 60.

Usage suggestions from Excalibur for dried cabbage: “Garnish rehydrated cabbage with a cheese, hollandaise, or sweet and sour sauce. It can also be flavoured with ham and made into cabbage soup.”

Unless you make cabbage into sauerkraut or use it in a pickled relish recipe, do not attempt to home can cabbage. See here for reasons why plain cabbage can’t be home canned.

Cabbage has been grown since about 500 BC. It originated as a coastal plant around the Mediterranean, where a salty, sunny environment encouraged it to develop its thick leaves to retain water when it could get it. Despite this, it thrives as well in colder climates.

The first varieties of cabbage that formed heads don’t seem to have appeared until around the 1st century BC. Until then, the Egyptians and the Greeks grew loose-leafed cabbage varieties that did not form heads.

“At some time in the 1st century BC the first headed cabbages appeared. The head, an enlarged termina bud, was at first a small one at the top of a long stem, but Pliny the Elder in the 1st century AD was already writing of a head 30 cm (12 inches) in diameter. He probably knew of this only by hearsay, since the new, headed cabbage is now thought to have evolved in Northern Europe.” [4]Davidson, Alan. The Penguin Companion to Food. London: The Penguin Group, 2002. Page 145.

Romans introduced cabbage to Britain. Jacques Cartier planted cabbage in Québec on his third-voyage there in 1541-42. British sea captain James Cook included pickled cabbage as part of his ship’s rations in 1771 to help prevent scurvy.

This web site generates income from affiliated links and ads at no cost to you to fund continued research · Information on this site is Copyright © 2023· Feel free to cite correctly, but copying whole pages for your website is content theft and will be DCMA'd.
Tagged With: Leafy Vegetables, Roman Food