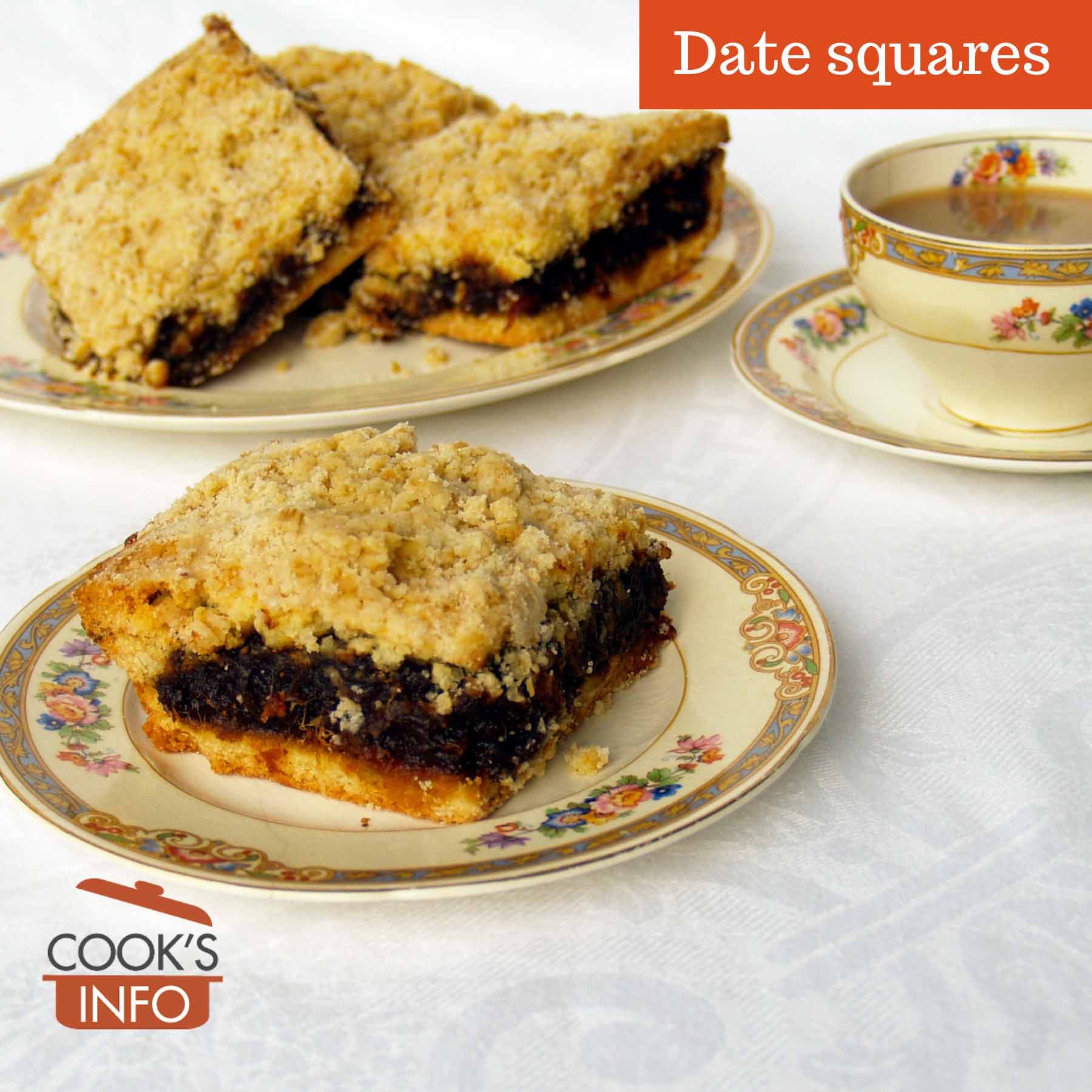 They consist of two solid but crumbly flour, oat and butter layers, with a layer of date paste filling in between. After baking, they are cut into square pieces to serve.

Variants began to arise as early as the middle 1930s. Some recipes added raisins to the date filling to make it keep moister longer; others called for figs instead of date.

Now, you will also come across variants such as:

There are also desserts called date squares that bear no similarity, apparent from the use of dates, to what North Americans now think of as date squares. A non-classic version mixes dates, nuts, flour, baking powder, sugar and eggs. The mixture is baked in a pan, then cut into squares and dusted with icing sugar. A South African version is unbaked refrigerator squares, with no oatmeal in them. Crushed biscuits are mixed in, and the bars are usually coated with coconut.

For the oats, regular or quick-cooking oats are fine, but not instant. 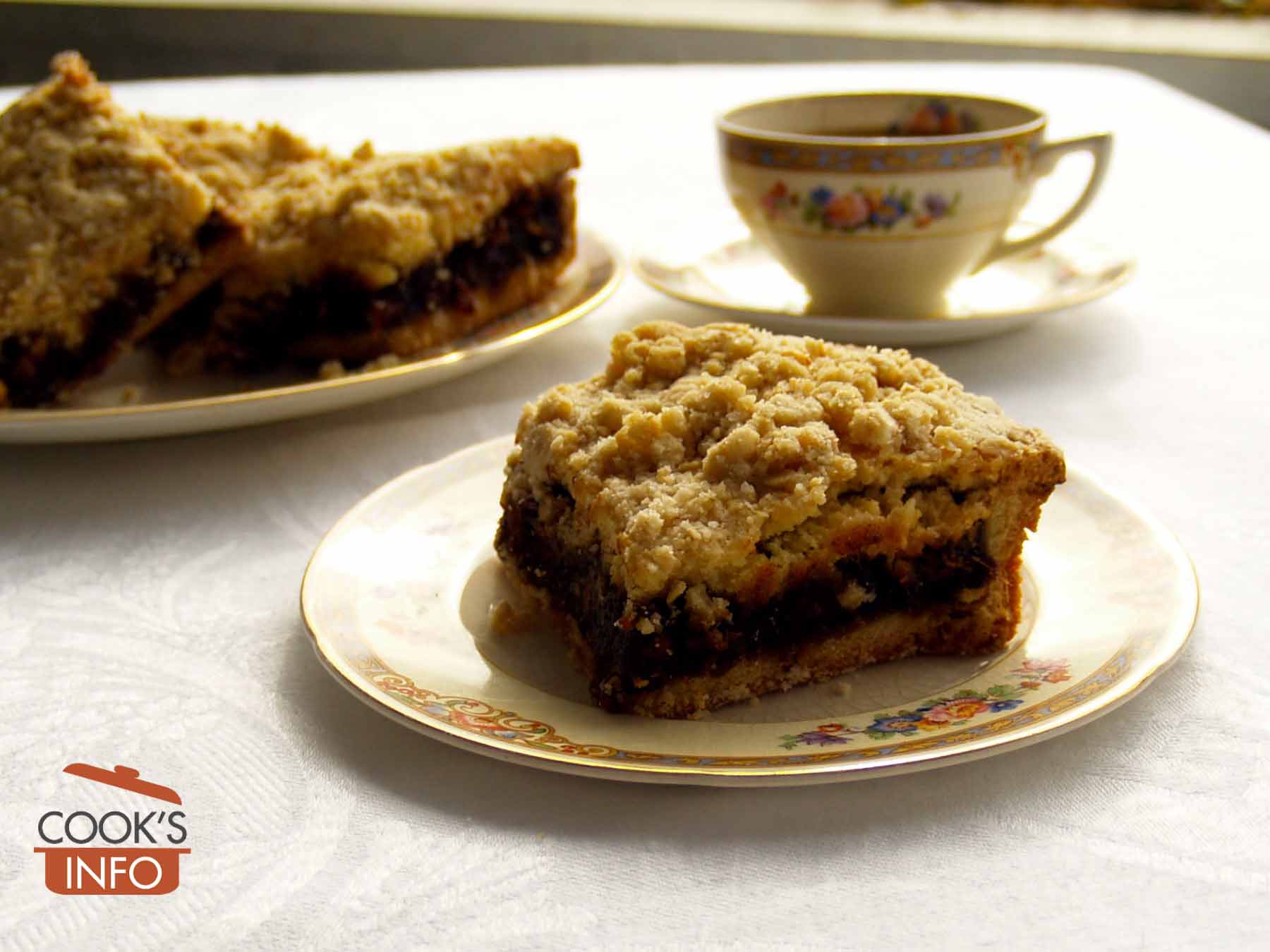 Bakeries in the prairies areas of North America such as Nebraska and Alberta were advertising a baked good called “date squares” at least since 1922, particularly R.W. Scotts “City Bakery” in the Higinbotham Block on 2nd Avenue in Lethbridge, Alberta. But we would have no way of knowing what form these date squares actually took.

An early 1923 recipe from Nebraska has a rolled-out oat dough between folded over a date filling, and then cut into squares before baking:

“Mrs [M.D.] Zimmerman stated that she had had so many inquiries for the recipe for date squares that she was going to give it to the public and here it is:

Method: Remove the stones from the dates and cut in small pieces. Boil the dates, sugar and water together until thick; let cool, cream together the shortening and the brown sugar, add the eggs well beaten, the rolled oats, flour sifted with the cream of tartar, soda, salt, the water and vanilla. Mix thoroughly and roll out thin. Spread the date filling on half of the dough, fold over the other half and cut into squares. Place on a greased pan and bake for fifteen to twenty minutes.” — Large Crowds at Food Show. Lincoln, Nebraska: The Lincoln Star. 25 October 1923. Page 11.

The first recipe that CooksInfo has found resembling what North Americans now call date squares is a 1928 one from California.

“Recipe is given for Delicious Date Squares
Cream together:
One cup Crisco.
One cup white sugar.

Take half the dough and spread in oiled pan. Spread with filling given below and cover with remaining dough. Bake at 375 degrees for 30 minutes. Cut in squares while warm.

Apropos! Luverne News: A Kossuth county lady won a dollar for sending the recipe for a cake to a publication. She called it matrimonial cake. And the principal ingredient was dates. — With North Iowa Editors column. Mason City, Iowa. Mason City Globe-Gazette. 13 December 1930. Page 3.

Note that in heading the blurb “Apropos!” and drawing attention to dates, the column editor might appear to be implying that the matrimonial reference stems from a lot of dates — as in courting — leading to matrimony.

A year later a recipe appears in California confirming that what is being referred to as “matrimonial cake” is indeed date squares.

Cream the shortening with a wooden spoon, stir in the sugar gradually, then the salt and flour, which have been sifted together. Stir in the rolled oats last and continue mixing until the ingredients will hold together. This makes a very stiff batter.

Cook the pitted dates and water over a low flame until a paste is formed. Add lemon juice. Spread the filling over the bottom layer. Cover the remainder of the batter mixture, which should be spread or patted into place. Bake in a rather slow oven (325 degrees F.) for about thirty minutes. Remove from pan while warm: crease into 2-inch squares. Cut when cold. This recipe will make about two dozen squares. — Tested Recipes column. Oakland, California: Oakland Tribune. 18 October 1931. Page 54.

The term “matrimonial cake” — and the recipe — had made its way up to Western Canada by 1933:

A Standard Favorite
The first one is a matrimonial cake. I know that to at least half of you that is an old story, but if you could see the requests we get almost daily for this recipe, you would agree that to the other half, it is a dark secret. And even if you have always made matrimonial cake, this one has a new idea that will change the flavor entirely, and one I believe you’ll like.

Method: Put the rolled oats through the food chopper to cut very fine. Sift the flour, salt and soda and combine with the oats. Then cut in the butter as for pastry, mixing thoroughly. Pat half of this mixture into a square greased cake pan and cover with the filling. Cover with the remaining crumbs and bake in a moderate 350 deg. F., oven for about 50 minutes.

Here we see, though, that food columnists were clear that the terms date squares and matrimonial cake could be used interchangeably:

The last is one for the ever-popular layer cookie baked all in one piece and then cut in squares, known variously as date squares or matrimonial cake.” — Horne, June. Culinary Clinic. Winnipeg, Manitoba: Winnipeg Free Press. 3 May 1941. Page 13.

Searching newspaper archive databases, usage of the term “matrimonial cake” for “date squares” would appear to have died out completely in the U.S., except when the source of the usage is a Canadian writer from the prairies in Canada.