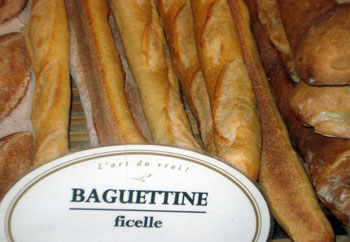 French Breads are very hard to imitate exactly outside of France, owing not only to the different flours used in France, but even to the different wheat the flours are made from. (See entry on French Flours.)

Classically, bread in France is made from only four ingredients: flour, yeast, salt and water.

The average person in France throws away 30% of the bread they buy, because it is “yesterday’s” bread. Bakeries in France bin sacksful of baguettes that didn’t sell that day. The average store in France discards around 100 baguettes a day, as their customers will only eat bread baked that day — many customers will even reject bread more than a few hours old.

“In Paris today millions of pounds of bread are sold daily, made during the previous night by those strange, half-naked beings one glimpses through cellar windows, whose wild-seeming cries floating out of those depths always makes a painful impression. In the morning, one sees these pale men, still white with flour, carrying a loaf under one arm, going off to rest and gather new strength to renew their hard and useful labor when night comes again. I have always highly esteemed the brave and humble workers who labor all night to produce those soft but crusty loaves that look more like cake than bread.” — Alexandre Dumas, père (24 July 1802 – 5 December 1870)