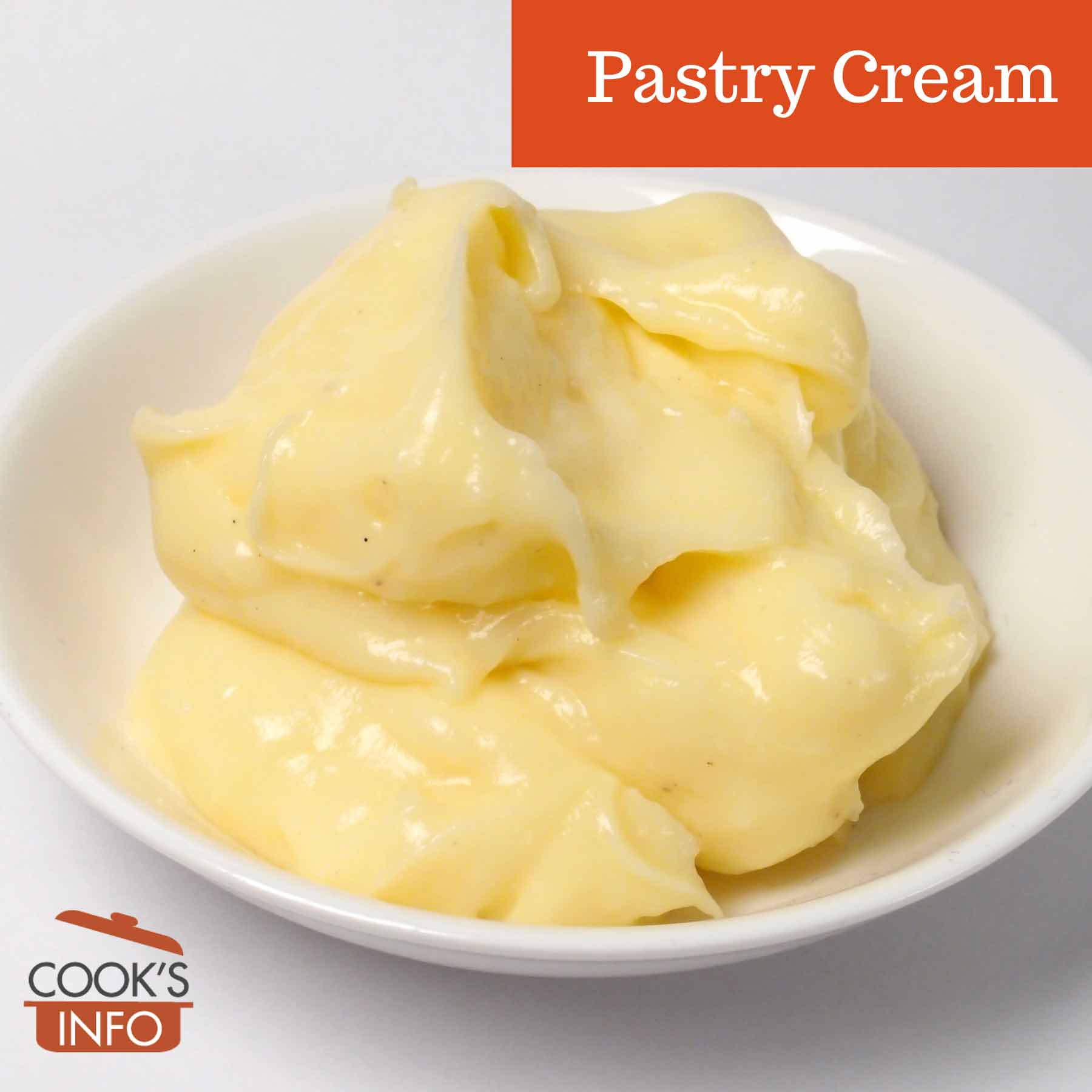 Pastry cream is basically custard whose thickening has been aided with a starch, typically cornstarch. The egg yolk in the custard does most of the thickening, though the starch does help out, too.

It is a basic component in many French and Italian desserts. It can be used as a layer between cakes, or used as a pipe-in filling in items such as cream puffs and éclairs.

It is made from milk, white sugar, vanilla, egg yolks, and cornstarch (aka cornflour in the UK.) Sometimes, a pinch of salt is added.

It is sometimes flavoured with liqueurs, chocolate, coffee or fruit.

Don’t use an aluminum pot in making it: it may make your pastry cream take on a greyish hue. The biggest danger to watch for in making it is that it might curdle, but it won’t curdle as easily as other custard variants, because it has starch in it. Curdling happens when the proteins start to join; starch hinders this.

Some advise never to let it boil; some advise that bringing it to a full boil is essential. (The theory is that egg yolks contain an enzyme “alpha amylase” which after the custard is done can “eat” the “amylose” in the starch, causing the structure to break down and making it go runny. The enzyme is destroyed by boiling.) Follow your recipe.

As soon as it’s thickened, transfer it from the pot into a bowl, or it will continue to cook, even off the heat.

There may be a layer of congealed or burnt stuff in the bottom of the pan when you empty it. Leave it there; consign it to the pot-washing brigade (that’s you, later) to take care of.

If lumps happen, press it through a strainer. Let cool with waxed or parchment paper over it so that a skin won’t form on top.

Some advise to beat after it’s chilled to make it silky-smooth. Some caution against it. Follow your recipe. If your recipe does call for it to be beaten, an electric hand-mixer is ideal.

This web site generates income from affiliated links and ads at no cost to you to fund continued research · Information on this site is Copyright © 2022· Feel free to cite correctly, but copying whole pages for your website is content theft and will be DCMA'd.
Tagged With: Crèmes, Pastry Cream, Zuppa Inglese