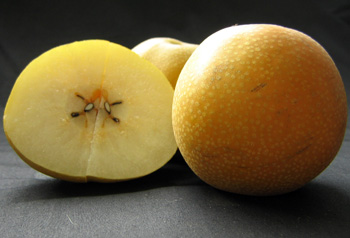 Asian Pears
© Denzil Green
Contents hide
You are going to hear lots of conflicting stories about Asian Pears over the next few decades. They are tart, they are sweet; they are very good to cook with, they are not good to cook with; the trees are self-pollinating, they are not self-pollinating. And, all these stories are true. For in fact, referring to Asian Pears as “Asian Pears” is like referring to every apple grown in the United States and the Commonwealth as an “Anglo-Saxon Apple.” Lumping all the apples together like that would be useless and misleading, and while Asian pear is a good term to distinguish these pears from European pears, it is not good of any use at all in helping you pick out which one is best for you. There are twenty very different ones listed on this site alone.

That being said, there are general characteristics that Asian Pears mostly share, and general ways in which they can be grouped.

Aside from the few that look like pears should, Asian Pears generally are shaped like apples and have the same crisp crunch as apples when you bite into them. They are not meant to be soft and buttery like European pears. They are bigger than European pears: the smallest is about the size of a good orange, and they can equal the size of a very hefty grapefruit.

Asian Pears bruise extremely easily, so they are usually shipped with padding (often little white foam net bags) around each one. Otherwise, they will turn black within a day in the spots where they have been jostled or bumped.

North American producers are adapting to the growing market demand for Asian Pears, but they have a few reasons not to like them entirely:

The ripeness of Asian Pears isn’t based on firm they are, as they will always be firm and crunchy, but rather it is based on fragrance (so again, close your eyes and sniff when buying.) The fruit, though, has to be picked from the tree before it gets soft, as then it is overripe and can feel spongy.

There have been reports of Asian Pears that look fine on the outside, but when the consumer gets them home, the pears have gone a yucky, mooshy brown inside. This is called “internal browning” and is in fact a worldwide consumer complaint about Asian Pears. Producers have found, through trial and error, that this occurs during storage, sometimes during the very first month of storage, and generally happens mostly to Asian Pears that have been picked more than 180 days after full bloom on the tree. Producers around the world are sharing knowledge on what exactly is causing this problem and how to prevent it, but in the meantime, they are going on what they know and picking the pears just a little bit early, which impacts the flavour.

The varieties of Asian Pears most susceptible to “internal browning” are Daisui Li, Olympic, Serui, Shin Li, Shinko, Tsu Li, and Ya Li. If you get a bad one, take it back to the store as the produce manager should know about it: the whole shipment may be bad. They may not want to know, they may prefer that you just pitched the pear and let them keep your money, but we’ll give them the benefit of the doubt here and assume that like all good produce sellers they care about the quality of the food going out their doors.

Asian Pears give off a lot of juice when cooked, so if you are using them in something, be prepared to need to compensate a bit.

Most Asian pears are classed for canning purposes as low-acid (in contrast to European pears.) A strong acid such as lemon juice must be added to them to make them safe for boiling water canning. The recommended ratio is 1 tablespoon of bottled lemon juice per 500 ml / US pint jar. [1]

Asian Pears have a very long storage life compared to other fruit. See entries for the individual varieties for storage times, as storage life will vary. But in general, you can keep them at room temperature for up to two weeks, and in commercial storage where a precise temperature range around 34F (1 C) can be maintained, some varieties will store for up to six months.

Asian Pears seem to have been cultivated in what is now Japan, China and Korea as far back as 1100 BC, making them the oldest cultivated type of pear in the world. The market for Asian Pears in the Western world started in the 1980s, with demand coming from Asians who had moved to the West. Now, 25 years later (2004), other consumers are catching on, too. New plantings are being done to accommodate the market for these consumers.

Sometimes Asian Pears are called “Apple Pears.” Just as Jerusalem Artichokes got their name from some misguided soul who thought s/he was being helpful, but who ended up creating a lot of confusion (fingers have been pointed at Samuel de Champlain), and just as Christopher Columbus has a lot to answer for in calling a chile a “pepper”, someone thought that because these pears were shaped liked apples and were crunchy like apples, “Apple Pears” would be a really helpful name. They were wrong. You end up seeing things like this in print: “Asian Pears are a variety developed by crossbreeding pears and apples, combining the mild flavour of the former with the crispness of the latter.” They are nothing of the sort, they are pears through and through. As you have seen, the generic term “Asian Pear” is causing enough confusion as it is, without nonsense like that going around.