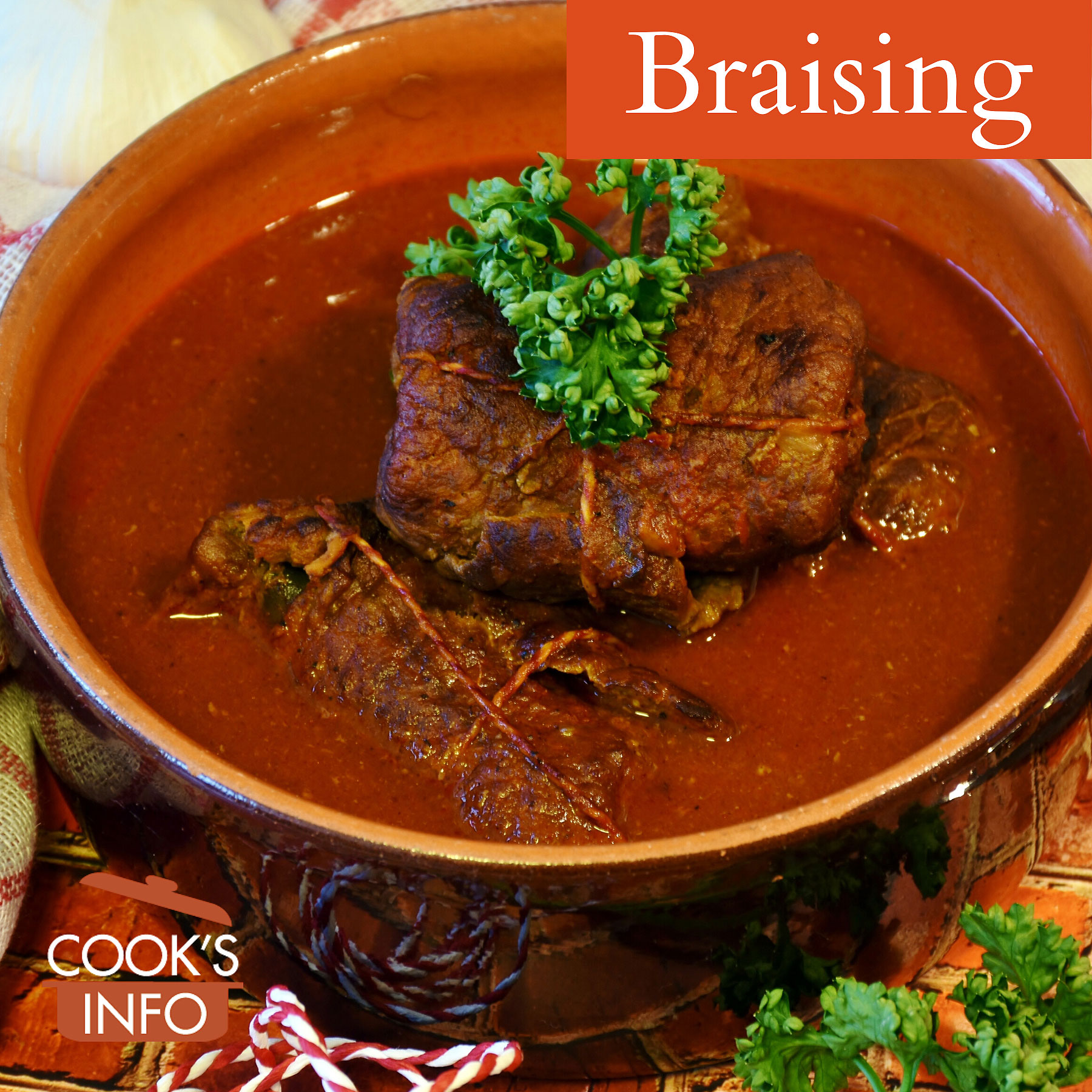 Braising is a method of preparing food through low and slow cooking with a small amount of liquid. The purpose of the liquid is to moderate the heat.

It’s important to note that the liquid does not add to the moisture of what is being cooked. That is a food myth.

Braising is now usually done in an oven, but it doesn’t have to be: ovens for the masses are a 20th century phenomenon, and people were braising long before that in covered pots. The pot used should be a good sturdy one that will hold the heat and steam in, with a tight-fitting lid.

Well-known dishes that use braising include pot roast and daube.

Occasionally the technique is used with vegetables — Julia Child gave a recipe for ‘Braised Lettuce’ in her book ‘The French Chef’ — but usually it is used for meat.

Braising for tougher cuts of meat

Braising is used with tougher cuts of meat. Not only are these cuts cheaper and therefore in need of this type of cooking, but they are the only cuts that will stand up to it: a braised filet mignon would be tougher than an old boot. These tougher cuts have collagen that breaks down, making them both tender, moist and extremely flavourful. Some meats, though, such as sausages, are as equally happy at being braised as they are at being quickly grilled over a flame, because they have enough fat in them.

Braising can be seen as just a slightly more sophisticated version of stewing. Braising is used with larger or whole pieces of meat, whereas stewing is usually done to bite-sized pieces. As well, braising uses a more restrained amount of water than stewing does, allowing the flavoured liquid that results to be concentrated and rich and serve as the basis of a very good sauce. Your recipe may or may not call for you to thicken the sauce before serving. After removing the meat and any vegetables, you may need to quickly ratchet the heat up to boil the sauce to help reduce it quickly. If your recipe doesn’t use the liquid at all, by all means freeze the liquid, and use it later as a good running start towards a very tasty gravy or stew.

There are two main different kinds of braising:

If your recipe calls for you to brown the meat first before braising, consider browning as well any items such as carrots, turnip, swede, mushrooms, onions or Brussels sprouts. When you’ve removed the meat from the pan, add a bit more oil or fat if needed and then brown these items right in the same pan. Even just a few minutes will help develop their flavours.

If your braising will be done in a pan different to that in which you seared the meat, don’t forget to deglaze the searing pan and add that liquid to your cooking pot.

There is no need to or benefit from marinating meat before braising.

To braise, add the meat and the braising liquid to a pot.

On the stove top, bring the liquid to a boil, and then reduce the heat to low. Cover and continue to cook at a gentle simmer. Too high a temperature causes meat proteins to shrink, so your meat will become chewy instead of fork-tender. A good simmer temperature is within a few degrees either side of 85 C / 185 F.

When braising, whether on top of the stove or in the oven, don’t forget to check periodically to make sure that all your liquid hasn’t evaporated away: this can spell disaster, especially on a stove-top.

Stove top braising is better for the summer, as it means you don’t have to have the oven on.

Henri-Paul Pellaprat, co-founder of Le Cordon Bleu cooking school in Paris, described the classic French definition of ‘braising’. It absolutely involved both an oven and browning the food first:

“Braising is one of the most frequently used methods of cooking but is only rarely done properly. All too often one is offered a piece of brown meat with all the goodness boiled out of it instead of a piece of braised meat. The main characteristic of good braising is proper crust formation. The meat should be placed in very hot shallow fat and browned evenly all over, including the ends. This forms a protective crust, which prevents the juices from running out [Ed: this is now known to be a myth. See searing meat]. During the browning process, aromatic substances and flavours are formed, which combine with the fat and are dissolved in the bottom of the pan and distributed when liquid is added. The liquid (water, stock, wine, sauce, etc.) should come only about ¼ of the way up the joint after the joint has been placed upon a lightly fried bed of vegetables. Cover the dish and allow to complete cooking slowly in a warm oven, about 350 F (175 C) or gas Mark III. The joint should be turned several times; it is best to let the liquid reduce down until it is drawing the fat from the meat, turn the meat in it several times, and fill up with fresh liquid. The pan should not be opened for lengthy periods, nor should the liquid be allowed to boil up violently.

A really good braised joint can only be cooked in a well-sealed dish in the oven at moderate heat, 350 F (175 C), because here the outside heat can penetrate from all sides. Each joint should not wait more than 5 to 9 pounds (about 2 to 4 kg). If necessary, larger pieces can be carefully browned in a tilting pen, and then braised with the necessary liquid and seasonings. It must, however, be possible to close the pan with a tightly fitting cover.” [1]Pellaprat, H.P. Modern French Culinary Art. London: Virtue & Company Ltd. 1969. Page 84-85.

He goes on later in his book to give more information about the handling of the meat:

“BRAISING In this method of cooking the meat is browned in fat with sliced carrot, turnip and onion. When it is browned, the fat is poured off and water or stock is added until the meat is covered. A lid is put on and the meat is cooked in the oven for 1 ½ – 4 hours, depending on the size, cut, type and quality of the meat. The garnish is added later so that the vegetables are cooked at the same time as the meat. Lean cuts of meat such as silverside or topside should be larded. The larding bacon is cut into short thick strips, seasoned and inserted into the meat in the direction of the fibre by means of a larding tube or needle. The most important point about braising is that the meat should be cooked slowly until it is so tender that it may be eaten without the aid of a knife. All fat should be removed from the braising liquor which is then reduced to make a sauce.” [2]Pellaprat, H.P. Modern French Culinary Art. Page 405.

When larger cuts are braised, the technique tends to be called “pot roasting” in North America.

This web site generates income from affiliated links and ads at no cost to you to fund continued research · Information on this site is Copyright © 2022· Feel free to cite correctly, but copying whole pages for your website is content theft and will be DCMA'd.
Tagged With: Meat Cooking Techniques