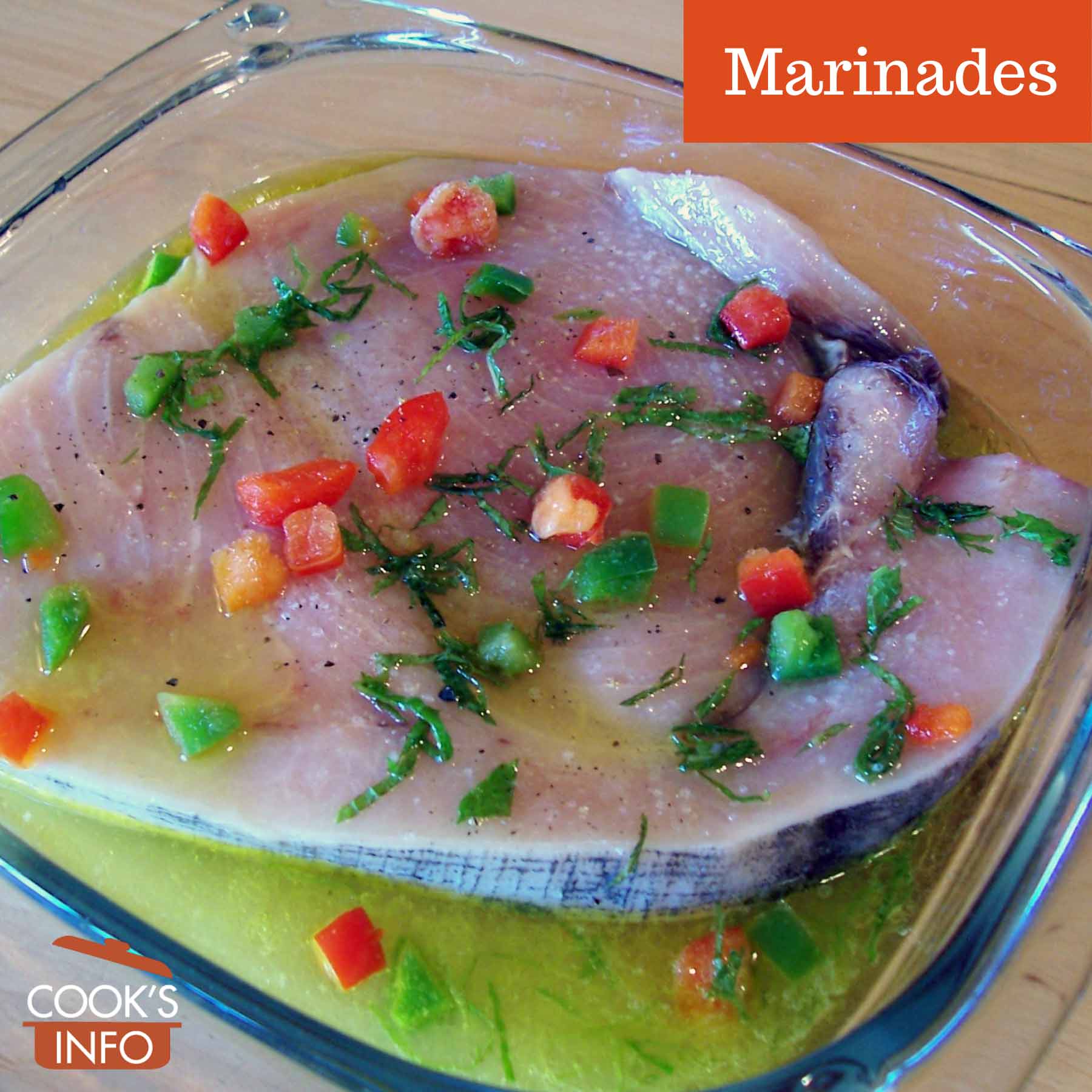 A marinade is a medium, often wet in the form of a sauce, used to prepare food for cooking, which is usually done afterwards by grilling or barbequing. Using a marinade is called “marinating.”

Goals of a marinade

There are three goals that people have traditionally aimed for when marinating:

The goal of a marinade providing short-term preservation of meat is not really important these days. If we get meat one day and decide not to use it till a day or two later, we just stick it in the fridge. We have only been able to do that at home, though, since the 1930s or 1940s, because before then there were no fridges available to ordinary people. Soaking a piece of meat in a marinade for a day would have helped inhibit its going bad for that short period of time — though we know now that as soon as raw meat enters the danger zone of 4 C to 60 C (40 F to 140 F) bacteria present can begin to rapidly multiply. [1]”Danger Zone” (40 °F – 140 °F). USDA Food Safety and Inspection Service. Accessed July 2021 at https://www.fsis.usda.gov/food-safety/safe-food-handling-and-preparation/food-safety-basics/danger-zone-40f-140f

The conventional wisdom is that marinating really makes a difference to a piece of meat or fish.

Many cooks, particularly men, pride themselves on their marinades, and take great pains to ensure guests know the details of it.

The sad fact, though is that wet marinating at home without a tumbler really doesn’t do a thing for meat. If you soak a piece of meat in a marinade sauce for even 48 hours, you are lucky if after all that time 1 to 2 % of the marinade gets into the meat.

Only with a tumbler can you get up to 10% or more of the marinade’s flavour into the meat. See entry on Tumbling.

As far as tenderizing goes, the theory is that marinating will help break down the elastin in meats, otherwise known as gristle. The marinade in practice though only softens the surface, because the marinade never penetrates into the meat where the tougher fibres are.

Harold McGee‘s book “On Food and Cooking: The Science and Lore of the Kitchen” sums it up best: “In general, there are at present no really satisfactory ways of tenderizing meat chemically.”

Marinating will not guarantee that your meat will be juicier when cooked, as some claim. Water just drips and evaporates away during cooking. Juiciness comes from fat, and only fat.

Too many tougher-cut steaks that would be gorgeous braised or cooked in moist-heat are ill-treated through being heavily marinated, making their surface all squidgy, and then grilled, making them dry and tough.

There are three methods of marinating overall.

These are also called “barbeque spices.” These rubs, made of dried herbs and spices, usually use salt to break down proteins and draw other flavours in. The downside is that the salt also draws out the meat’s juices.

Dry rubs are easier to use, less fussing, and actually create a noticeable effect, unlike wet marinades. These are what some real barbeque pros use. Popular dry rub styles include Cajun, Tex-Mex and Jamaican.

This category includes Jerk seasoning and Berber spice paste. The pastes are basically often the same idea as dry rubs, being spices and herbs, but mixed together with an oil or other liquid to make a paste. Pesto makes a good wet rub for poultry and seafood.

Wet marinating completely immerses a piece of meat in a marinade liquid.

Many cooks advise not to use salt in wet marinades for meat or fish as the long soaking times gives salt a wonderful opportunity to draw out all the juices from the meat. This would toughen your cut of meat.

The marinade, covering the meat, can protect it from going bad while it is marinating — but only for a short period of time. In fact, though, because we aren’t in the Middle Ages, we don’t need to rely on that. Never wet marinate outside the fridge for more than an hour: let it happen in the fridge.

No matter how long you wet marinate something, it is only going to go so far in, about 5 mm (¼ inch) or so if you’re lucky, and that’s it. It’s a myth that scoring meats with a knife first or piercing them will increase the uptake of marinade: instead, what you do is create more means for the juices of the meat to flow out while cooking. Plus, if you really could work out a way to get a lot more of the liquid in, you’d end up steaming the food, rather than grilling it.

Cubed meat tends to absorb more flavour than full cuts, as there is more surface for the marinade to come in contact with.

Pat wet marinated food dry first before putting on the bbq / grill to avoid flare-ups and to help avoid steaming the food.

There are three types of wet marinades designed to tenderize meat.

This includes marinades with bases such as wine or vinegar, or highly acidic juices such as tomato juice or citrus juices. The acid loosens bonds between proteins in the meat, causing them to unravel and loosen up. After a while though, the bonds between the proteins form again, tightening up the meat, and squeezing juices back out, actually toughening the meat.

Papain or bromelain, in fruits such as kiwi, papaya leaves or fruit, pineapple, etc. actually break down muscle fibre. If left too long, they can do too good a job and make the texture of your meat mushy and spongy. Natural juices in the meat flow out, your wet marinade will flow in, but when you go to cook it, your wet marinade that was absorbed just evaporates, leaving the meat dry and tough.

Many feel that this the only tenderizing approach that actually does much. The calcium in the dairy activates enzymes already in the meat, in the same way that aging meat does, which break down proteins in the meat on their own. Buttermilk and yoghurt are also mildly acidic.

Different flavours of marinades are appropriate for different foods. You wouldn’t use a red-wine-based marinade for poultry or fish, and fruit flavourings wouldn’t go with beef, for most people’s contemporary tastes. Marinades with seafood, poultry and vegetables are really there to in an attempt to add flavour, not to tenderize, so soaking times for these are far shorter, and these marinades tend to be less acidic.

Wet marinating is best done in a sealable plastic bag, along the line of those with a zip top. It lets you turn the item over and over very easily, and if you’re marinating in a sealed bag, the food doesn’t have to be completely covered with the marinade. Put marinade and items to be marinated in the bag, press as much air out as you can and seal. Don’t wet marinate in anything aluminum or cast iron, as it can create an off-taste.

Following is a very rough guideline for wet marinating times. It’s rough, because it depends on how acidic any particular marinade is. Remember, the danger is that over-marinating will toughen and dry-out your meat.

Should you wish to use some marinade as a basting sauce or a table dipping sauce, then as soon as you have made the marinade sauce take some of it right at the very beginning (make extra if needed) and set this reserved amount in the fridge until needed for basting or serving. [2]”If you want to use the marinade as a dip or sauce, reserve a portion before adding raw food.” Cooking Meat Safetly. Clemson Cooperative Extension. 15 June 2011. Factsheet HGIC 3580. Accessed July 2021 at https://hgic.clemson.edu/factsheet/cooking-meat-safely/

Never re-use wet marinades that have had raw meat or fish in them. Some people use the marinade to baste the meat with while it is cooking, but to do this safely you must first bring it to a boil and keep it there for at least 1 to 5 minutes (estimates given vary) to kill any bacteria it has picked up from the meat; otherwise, you’re spooning uncooked meat juices with bacteria onto mostly cooked meat and dishing up food poisoning for your guests. The 5 minute range seems safer, though at this point the flavour of the marinade would have changed, and who’d want to use it anyway?

A few people boil the bacteria-laden used marinade then put it on the table as a sauce for people to spoon onto their food, but some bacteria can create toxins that won’t go away no matter how long you boil the sauce.

So instead, discard completely down the drain all the wet marinade sauce that came into contact with the raw meat, then pull your reserved portion out of the fridge to use for basting or serving at the table.

Never re-use a plate on which raw meat or fish has been.

Never taste marinade in which raw meat or fish has marinated.

Use an Instant Read Meat Thermometer to gauge the safe doneness of meat and fish. This also prevents overcooking!

Originally, even though the recommendation is largely now to avoid salt in marinades, marinades were historically always made of brine. Seawater could even be used. In Latin and Italian, “marinara” means “from or of the sea”. Our word marinade is derived from that.

This web site generates income from affiliated links and ads at no cost to you to fund continued research · Information on this site is Copyright © 2022· Feel free to cite correctly, but copying whole pages for your website is content theft and will be DCMA'd.
Tagged With: Steak