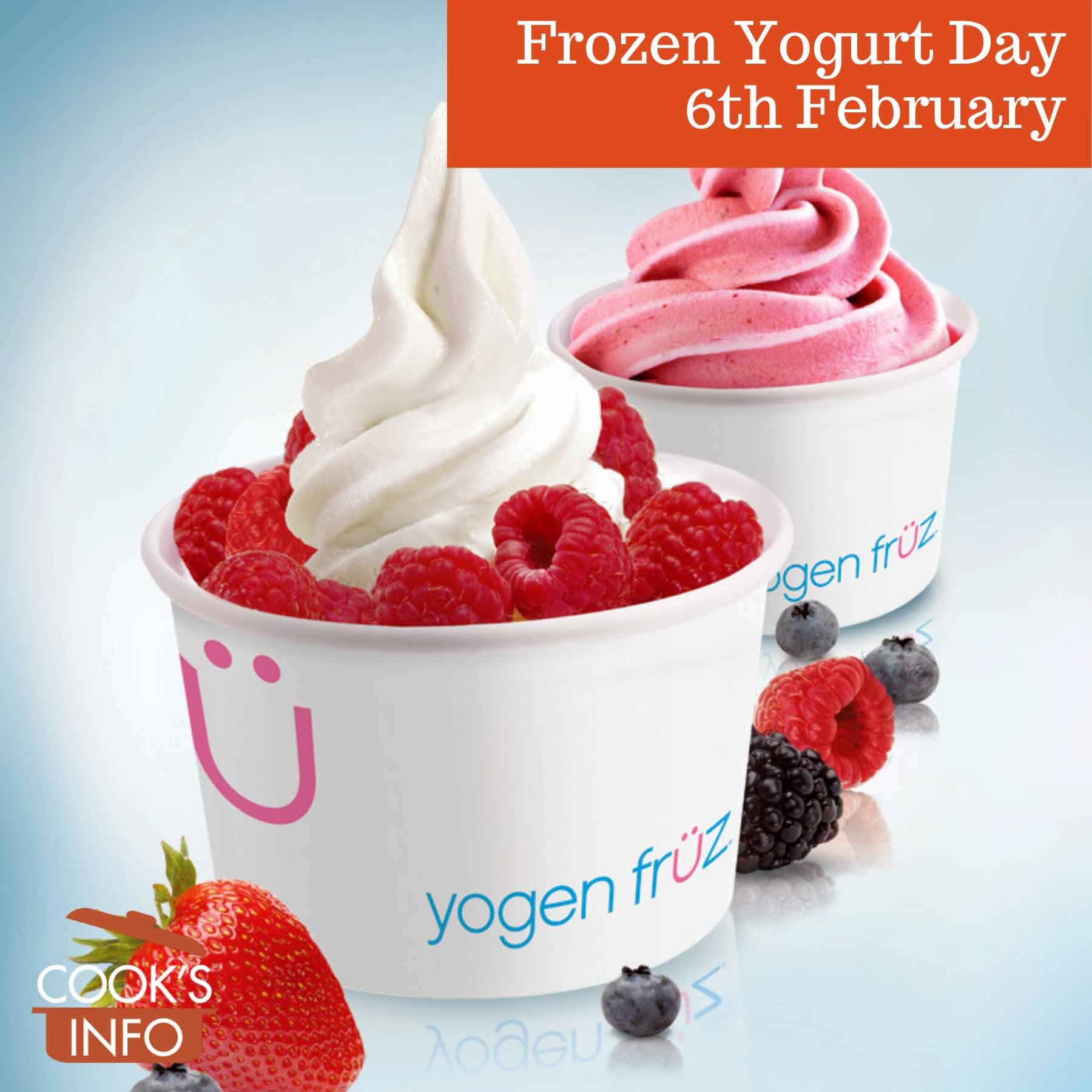 The 6th of February is Frozen Yogurt Day.

Frozen yogurt (aka yoghurt) started off as a healthy-sounding idea, but soon became known for being laden with sugar and fat, belying the healthy implications of “yogurt“. Now, though, you can get “specialty” ones which actually aim to be true to the promise of their name, coming in low-fat, no-fat, no added sugar and active culture variations.

The frozen yogurt can be soft enough to serve soft-serve in swirls on cones, or hard enough to be hand scooped.

On this day, some places may give it out free, either to the first so many customers, or in small servings.

Promotions have been offered particularly by larger chains such as The Country’s Best Yogurt (TCBY) and Yogurtland.

“TCBY guests can join the celebration and receive a complementary six ounce cup at participating locations….. ‘We’ve been building a legacy of delicious, healthy frozen desserts for more than 30 years and we believe National Frozen Yogurt Day is the perfect time to honor our loyal fans with a sweet deal,’ said Dustin Lyman, Chief Executive Officer of TCBY. ‘We’re excited to provide free frozen yogurt to our guests all day and can’t wait to celebrate with our friends and family nationwide.’… [1]TCBY Gives Away Free Frozen Yogurt In Celebration Of National Frozen Yogurt Day. January 30, 2018 Canadian Franchise Association Industry News

You could even try making your own today.

In 2001, it was cited in an Iowa newspaper as being in June as well.

In 2003, it has moved to July, according to a Missouri newspaper: 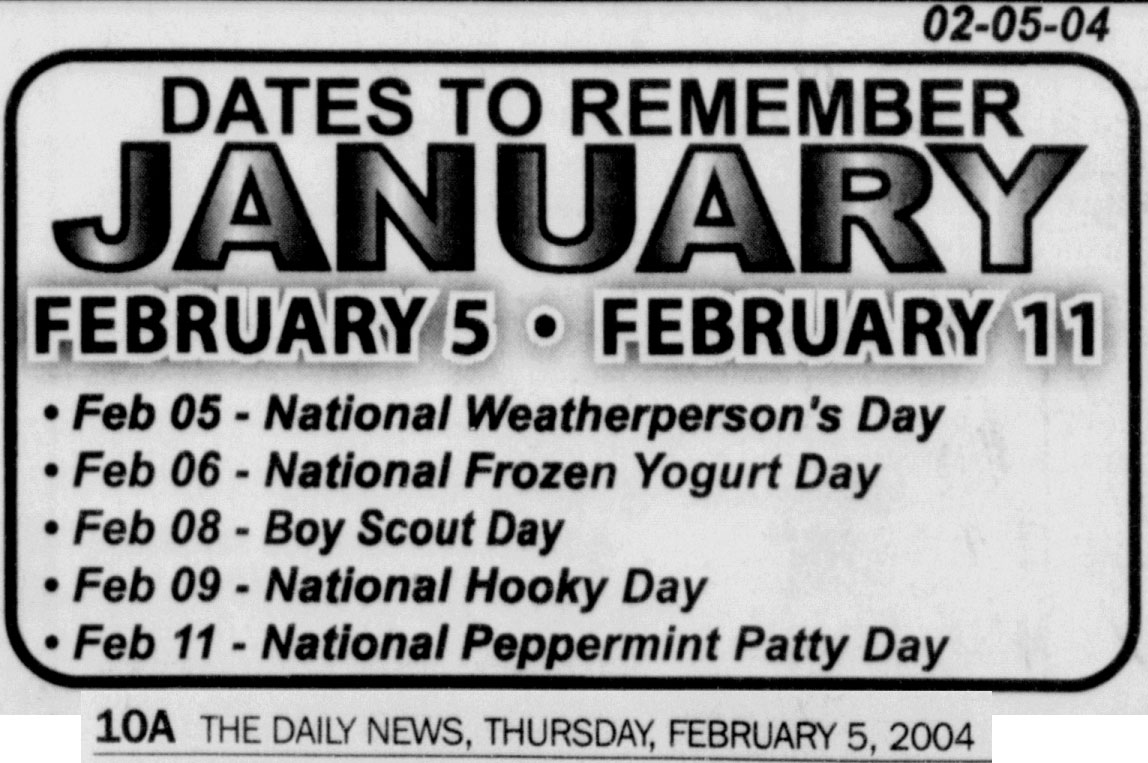 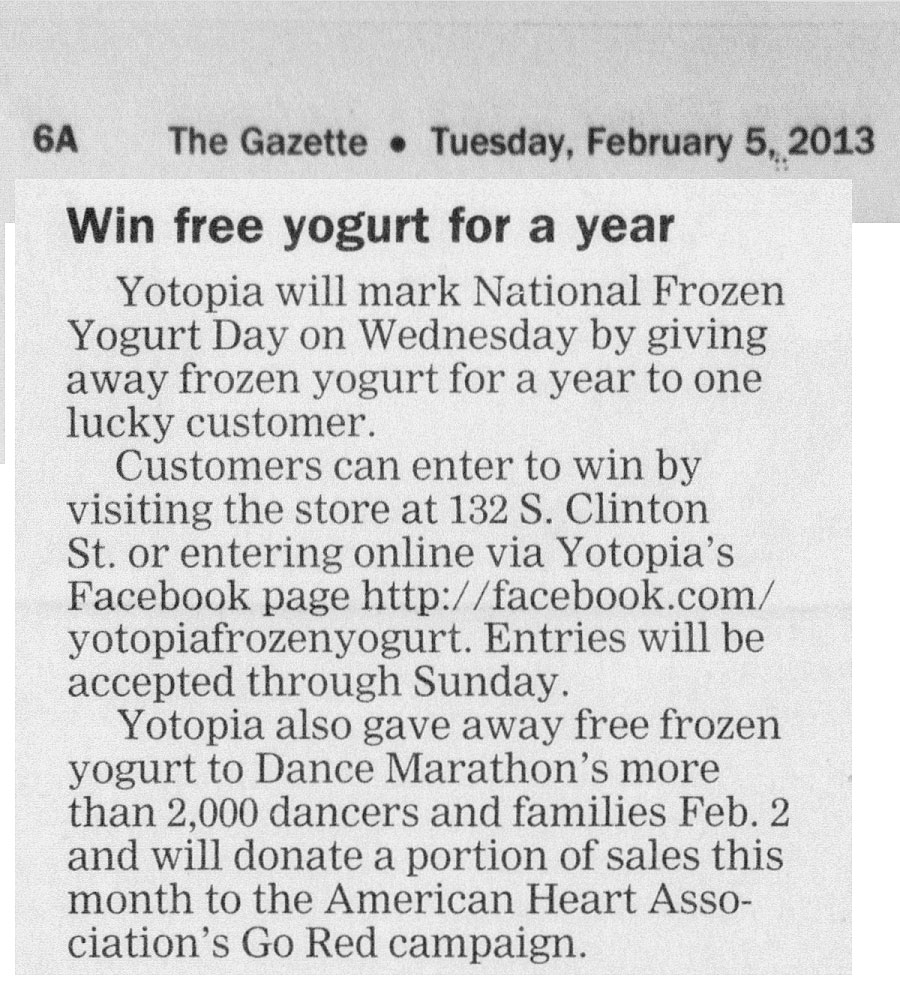 On the 6th of February 2013, a local athlete addressing a small crowd in Burlington, North Carolina said she presumed they were actually all gathered there to celebrate National Frozen Yogurt Day:

“But, standing in front of family and her soccer teammates, Middleton addressed the crowd for what the celebration was about: National Frozen Yogurt Day, Middleton told the crowd, breaking the ice and in turn opening with humor on the day she signed with the University of Miami for a soccer scholarship. “It is weird having them come anyway, because literally guys. I’m signing a piece of paper,” a modest Middleton said. “ I’m signing a piece of paper. But, I just decided I’d start with that because I like yogurt too.” [7]O’Neill, Conor. W. Alamance’s Middleton achieves secret goal. Burlington, North Carolina: Burlington Times News. 7 February 2013. Section B, Page 1, col. 4.