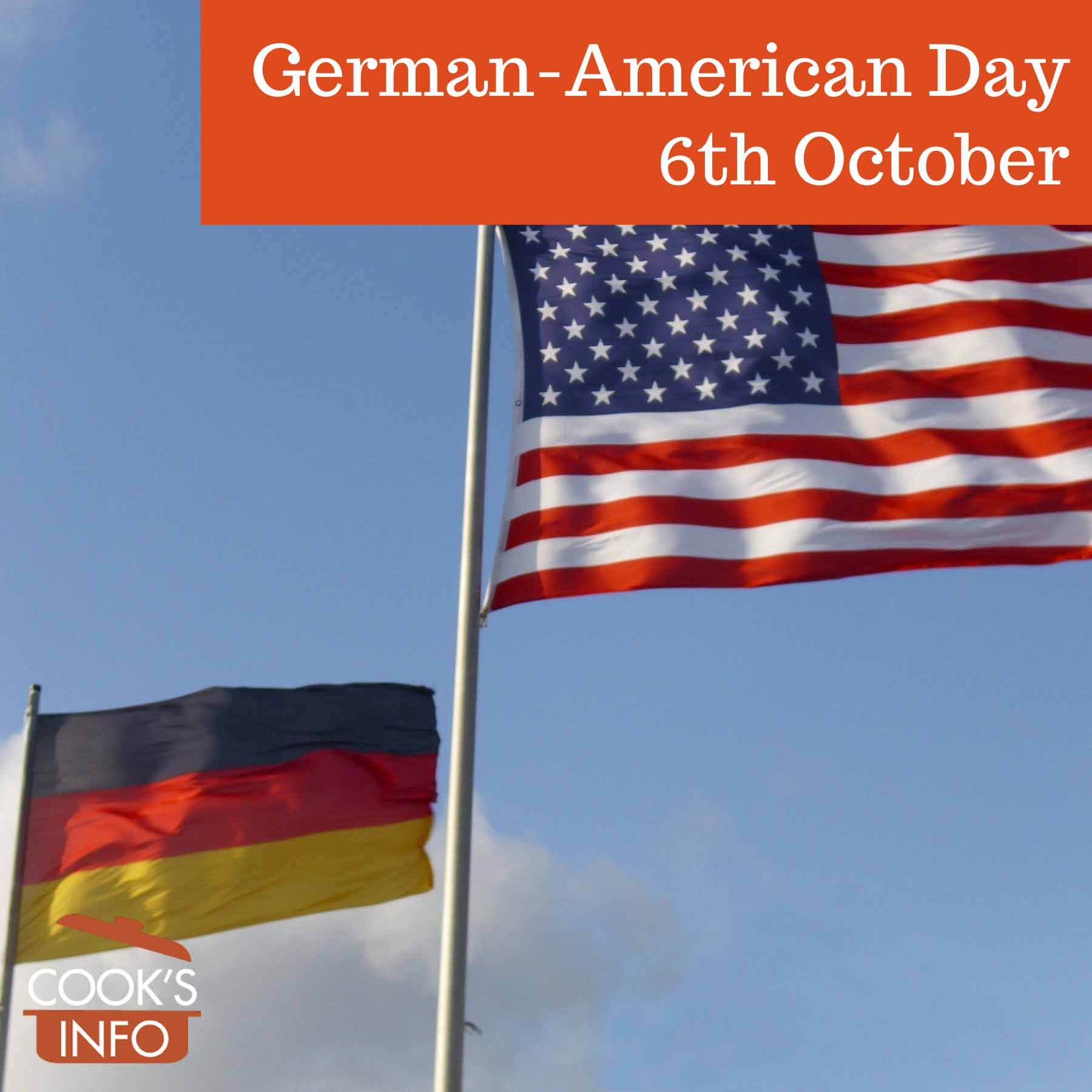 The 6th of October is German American Day.

The day celebrates German heritage in the United States.

Germans brought with them to the United States a strong work ethic along with traditions including beer brewing, Christmas trees, and the Easter Bunny. They helped to invent new American traditions, such as hot dogs and hamburgers.

Note, though, one food item that often catches people out: German chocolate cake actually has nothing to do with Germany, or German food.

In German, the day is know as “Deutsch-Amerikanischer Tag“.

German American Day marks the 6th of October, 1683, when thirteen Quaker and Mennonite families from Krefeld (now in North Rhine-Westphalia Germany; at that time under Dutch rule) and Krisheim (in the German “Palatinate”, now called “Griesheim”), totalling about thirty-three people all together [1]”History of Germantown, Philadelphia, Pennsylvania”. Genealogytrails.com. Accessed September 2021 at http://genealogytrails.com/penn/philadelphia/phlhistgtown.html founded the first German settlement in the United States at what would become Germantown, Pennsylvania. Typically referred to as “German”, in fact, a number of them appear to have actually been Dutch speaking, and Dutch was reputedly the dominant language in the town until around 1710. [2]Van der Sijs, Nicoline. Cookies, Coleslaw, and Stoops: The Influence of Dutch on the North American Languages. Amsterdam, The Netherlands: Amsterdam University Press. 2009. p. 223. [3]Germantown Monthly Meeting of the Society of Friends. The 1688 Germantown Quaker Petition Against Slavery. 2008. Accessed 2021 at http://gmm.gfsnet.org/long_intro_1688_exhibit.pdf [4]Hull, William I. “The Dutch Quaker Founders of Germantown.” Bulletin of Friends Historical Association, vol. 27, no. 2, Friends Historical Association, 1938, pp. 83–90, http://www.jstor.org/stable/41944085.

Some debate has gone back and forth historically over how many of the Krefeld people were Dutch speaking, despite holding Dutch marriage certificates, etc., with some writers saying the claim is an attempt to downgrade German contributions to the United States. In fact, the core defining thing actually about these settlers was that they were all Quaker, and their reason for coming over to settle was religious. [5]It’s also key to remember that while we tend to think today of black and white,, clear-cut distinctions between standard German and standard Dutch languages, regional dialectical blurring between German and Dutch occurs in Europe moving northward. Even today, the dialect spoken in Krefeld is categorized as Netherlandic (aka Low Franconian), which classifies West Germanic varieties as well as those spoken in the Netherlands. [6] Hubben, Wilhelm. The Germantown Immigrants of 1683. In: Friends Historical Association: Bulletin of Friends’ Historical Association. Volume 27, Number 1, Spring 1938. pp. 35-36. Accessed September 2021 at https://muse.jhu.edu/article/400185

Regardless of the initial linguistic makeup, many German heritage families who had settled in Delaware came to resettle in Germantown, eventually making German the dominant culture there. [7]”History of Germantown, Philadelphia, Pennsylvania”. Genealogytrails.com. Accessed September 2021 at http://genealogytrails.com/penn/philadelphia/phlhistgtown.html

The day stopped being celebrated in World War One owing to anti-German sentiment. It regained popularity in the 1980s when U.S. president Ronald Reagan signed a proclamation in 1983, as well as in 1987 (in the Rose Garden) and 1988 [9]https://www.reaganlibrary.gov/archives/speech/proclamation-5864-german-american-day-1988, marking the 6th of October as German American Day.

Note that even though Congress passed that statue, it is not automatically an “official” annual holiday. It still requires actual presidential proclamation each year for it to be “official”.

Why ‘Little Germany’ disappeared from NYC and other little-known events of German-US history. Bonn, Germany: Deutschewelle. Accessed September 2021 at https://www.dw.com/en/why-little-germany-disappeared-from-nyc-and-other-little-known-events-of-german-us-history/a-45731400