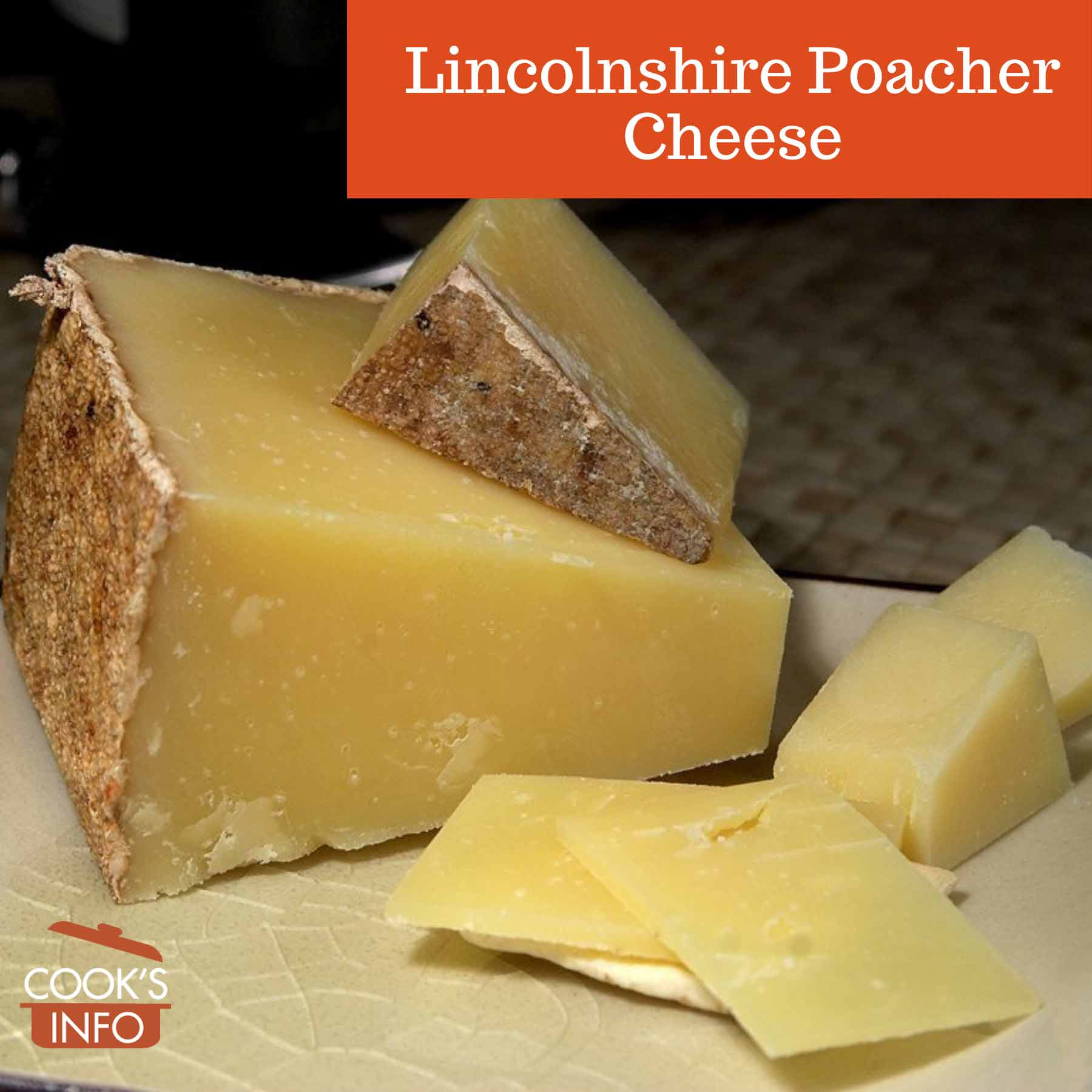 Lincolnshire Poacher is a long-aged cheddar cheese whose taste combines sweetness with a touch of bitterness. It is pale yellow inside, with a brownish rind.

The cheese is made using raw milk from Holstein Cows.

The milking is done at 5 am each morning. The milk is piped straight from the milking room into the vat in the cheese factory, where it joins milk from the previous evening’ s milking.

The cheesemaking starts at 6 am. The milk is heated to 41 C (105 F). A starter culture containing lactococcus is added, along with rennet to curdle the milk. The curd is cut very small, then stirred for an hour until it’s even smaller, the size of a grain of rice. Then the vat is drained of whey, leaving the curd behind. The curd is cut again, then salt is mixed in by hand. The curd is milled again to cut the curd up finely. The curd is then packed into wheel moulds, with weights on them for 48 hours.

The cheese is then turned out of the moulds, and aged on wooden shelves for 12 to 24 months.

Each batch of Lincolnshire Poacher Cheese made requires 9,700 Imperial pints (5,512 litres) of milk, and yields ½ ton of cheese or 20 wheels. Each wheel ends up weighing around 20 ½ kg (45 pounds).

Lincolnshire Poacher is made by brothers Simon and Tim Jones at Ulceby Grange farm, near Alford, which has been in his family since 1917. The farm is about 16 km (10 miles) from the sea, in Lincolnshire.

Lincolnshire Poacher was created on 17th February 1992 by Simon and his wife Jeanette, with advice from a Welsh cheesemaker, Dougal Campbell.

His brother Tim took over sales and marketing in 2000.

“Tim Jones, a dairy farmer of 28 years, makes Lincolnshire Poacher, a hard mature cheese with milk from his 230 cows. He employs 16 full-time and eight part-time staff. “We grow the crops which feed the cows,” he explains over the phone. “This morning’s milk is turned into cheese.”” [3]Russell, Polly. Covid-19 and the battle to save Britain’s farmhouse cheeses. London, England: Financial Times Magazine. 1 August 2020. Accessed April 2022 at https://www.ft.com/content/32f8475e-da43-4f50-ad36-0078c3bb463c

The company also regularly sells at farmer markets in the local area.

This web site generates income from affiliated links and ads at no cost to you to fund continued research · Information on this site is Copyright © 2023· Feel free to cite correctly, but copying whole pages for your website is content theft and will be DCMA'd.
Tagged With: British Cheeses, English Food, Lincolnshire Food