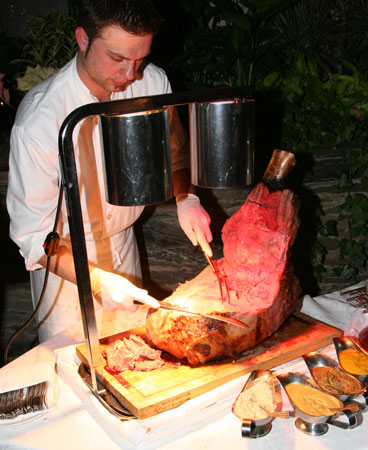 A meat dish is a prepared item of food that consists either wholly or partly of meat.

If the dish consists partly of meat, then whether it is classed as a meat dish can depend on the proportion of meat in it. While some might classify a lasagna as a meat dish, with its layers of meat, most people would classify a Chinese fried rice dish, with only small amounts of chopped pork in it, as a rice dish rather than meat.

The meat is usually cooked by a variety of means; only rarely is it served raw (in a dish such as Steak Tartar or American mid-west Tiger Meat.) The animal is never eaten live; that is considered taboo in most cultures.

The meat can be from any part of an animal, depending on cultural preferences and taboos. In the English-speaking world, there is a strong prejudice against organ meat from an animal. Culturally favoured cuts of meat raise the prestige of the meat dish they are served in or as: a favoured cut of meat such as beef tenderloin is used in prestigious meat dishes, such as a Chateaubriand Roast.

Even so, though traditionally off cuts or offal such as beef shin, oxtail, chicken wings, pork ribs, etc, were considered cheap meats, their prices are rising as they are being rediscovered by foodies.

The meats featured in a cuisine’s meat dishes are often linked to geographic regions of a country; for instance, steak in Texas, and goose and duck in the Gascony region in southwestern France. The preference is usually linked to the historical ease of raising the animals affordably in those areas.

Meat consumption is a sign of prosperity in a culture, because meat has historically been expensive. Consequently, most traditional meat dishes involve portions of meat mixed in with other things in order to stretch the meat out.

Even so, Northern European cuisines such as German and English tended to place a higher emphasis on wholly meat dishes (a piece of meat by itself, not mixed with other ingredients in a dish) than many other cultures; they have since Roman times. Despite the relative wealth of Rome, the Romans viewed eating slabs of meat as conspicuous consumption, if not also downright vulgar and barbarian, and Romans who did were often mocked by writers. The Romans tended to reserve meat dishes for more special occasions such as a banquet or feast.

Japanese cuisine only started including larger amounts of meat since the mid 1850s, as prosperity started to arrive in the islands owing to the rapid commercialization of the economy.

Leftovers from meat dishes should be refrigerated or frozen as soon as any visible signs of steam are gone; there is no need to let them cool completely.

Meat dishes can be frozen for 2 to 3 months, well-wrapped. Dishes with a sauce that can protect the meat tend to freeze better than plain cooked meat dishes such as meatloaf or a cooked steak; without the sauce, such wholly meat dishes tend to be more prone to freezer burn.

Meat dishes can be reheated in the oven, on the stove top, or in the microwave, depending on the dish. When reheating them, reheat them thoroughly until they are very hot.

The Romans considered the Germanic tribes barbarians because they relied so heavily in their diets on meat and animal products. When an animal was killed to be eaten, it would be done first as a sacrifice, to the household gods or to public gods, as a way of showing respect for the life that was being taken. It would have been seen as beyond the pale to just butcher an animal for food without dedicating it to a god first. At home, the sacrifice would be to household gods. Butcher shops would sell meat that had been sacrificed in the public temples.

Christians banned the sacrifice practice, leading to meat becoming deconsecrated and paving the way for it to sit today in supermarket chillers as a product unlinked from the animal it came from.