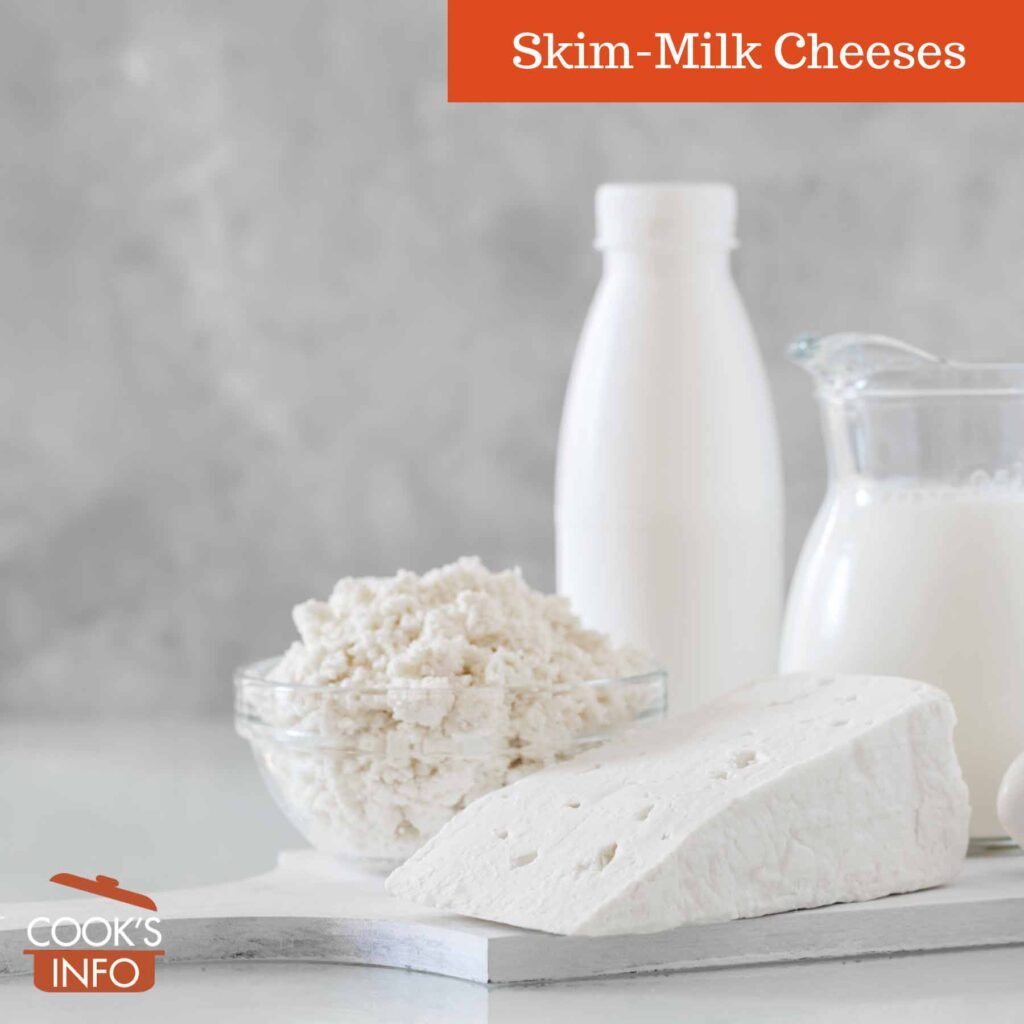 Skim-milk cheese is a term used to describe cheeses made with at least some skim milk. The types of cheese that can be produced vary greatly.

One of the most famous skim milk cheeses is Parmesan.

In general, “skim milk cheese” can mean that some fat has been removed from the milk used in making the cheese, though you may not know if all fat or even how much was removed. It can also mean whole milk has been used, with some skim milk added, or it can mean skim milk was the base, with cream or whole milk added.

There is no shared, standard legal definition of the term. The legal definition may vary even from jurisdiction to jurisdiction inside a country. For instance, in Canada, the province of New Brunswick defines it as cheese made with milk with less than 48% milk fat in it; the province of Manitoba defines it as cheese made with milk that has a maximum of 7% milk fat in it.

Unless specified, the term implies cow’s milk, but note that it does not necessarily always mean that.

Some traditional skim milk cheeses such as cottage cheese, ricotta and quark, are made as fresh cheeses (but note that quark can also be made from whole milk.)

Most skim milk cheeses, though, are made as aged cheeses, and tend to be harder and grainier than whole milk cheeses without the fat molecules to keep them softer and smoother. In whole milk cheeses, fat balances proteins in emulsification. But when there’s not enough fat to provide this balance, the proteins form grainy deposits. When this is not desirable, industrial food processors can overcome this without increasing the fat by using emulsifying salts which expand the surface area of what fat there is, increasing the emulsification that happens. Or they may use another, cheaper fat such as vegetable oils rather than milk fat. But if there are a lot of gums, stabilizers or other emulsifying agents added to a commercial skim-milk cheese, you may not get what you expect when it has melted.

Some people feel that when you take cheeses traditionally made from whole milk, such as cheddar, and try to make them from skim milk instead, that the cheese ends up with all the appeal of recycled sawdust, as the cheese was never designed for that kind of milk.

Just because a cheese is made using skim-milk doesn’t necessarily mean it’s lower in fat than other cheeses. Fat content can get concentrated through production techniques. You need to read the nutrition panel for the cheese to see how many actual grams of fat there are per oz / 100 g. Dieters tend to prefer ones with 2 to 6 grams (preferably around 3 g) of fat per oz / 30 g.

Skim milk cheeses tend to have a longer shelf life.

In the past, skim milk cheeses were just for the poor.

Farmers would skim their milk and either use the cream for butter or sell it. It made more economic sense to transport cream to a market than whole milk, because a pail of cream was worth far more than a pail of milk.

The skim milk left behind was often just fed to the pigs.

In the UK, the generic term for a skim-milk cheese was “flet”.

This web site generates income from affiliated links and ads at no cost to you to fund continued research · Information on this site is Copyright © 2022· Feel free to cite correctly, but copying whole pages for your website is content theft and will be DCMA'd.
Tagged With: Fat Content of Cheeses, Skim-Milk Cheeses