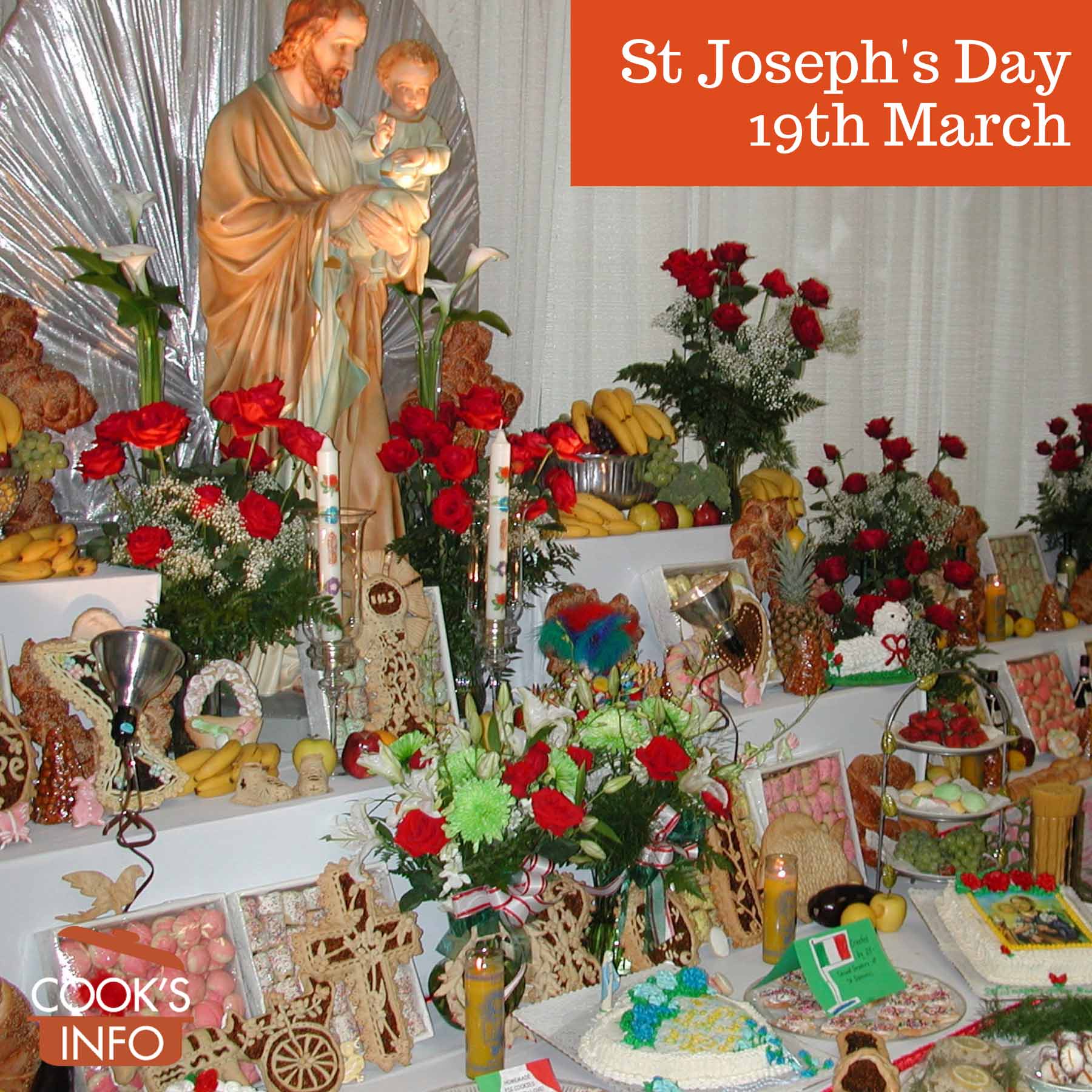 The 19th of March is St Joseph’s Day.

It is observed throughout Italy but especially in Sicily to honour St Joseph.

What is St Joseph’s Day

In Italian, the day is known as the “Feast of St. Joseph”, or, “La Festa di San Giuseppe”. St Joseph, or San Giuseppe in Italian, is the earthly father of Jesus.

St Joseph’s Day is a day to honour the saint, and, coincidentally, provides a reason for a feast to break the monotony of Lent.

There are parades and processions held in some communities in the U.S. with large populations of Italian heritage. In particular, there is a very big parade in New Orleans through the French quarter.

There is also music and dancing.

Red is a traditional colour for clothing for people observing today. 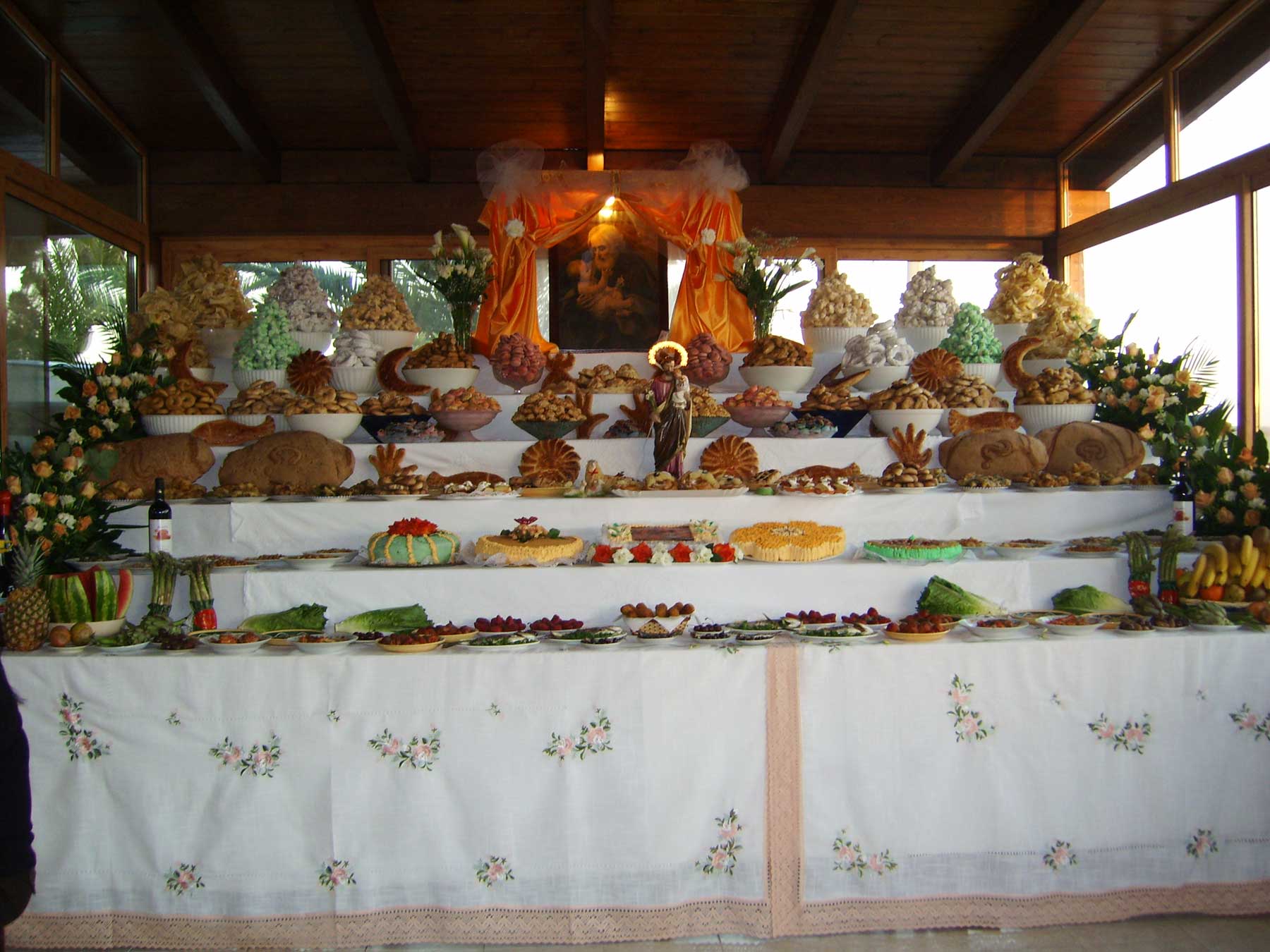 St Joseph’s Day falls during Lent, which is a dour period food wise. Owing to this being a special day honouring a high-ranking saint, feasting is allowed on this day. [1]Feasting is also allowed for St Patricks’ Day. However, it is still Lent, so traditionally no meat was allowed, and thus all the featured dishes were traditionally meatless. Many of the dishes will be based on fish and seafood as they do not count as meat. (In recent times, some church officials are now saying that meat is allowed today.) [2]The Archdiocese of Chicago said in 2021 that “Today, we celebrate the Solemnity of St. Joseph, chosen as trustworthy guardian to protect Mary and Jesus. Since this solemnity falls on a Friday, the law of abstinence from meat and meat products does not apply on Friday, March 19, this year (per Canon 1251).” — In: Silver, John. It’s a Friday in Lent, but Catholics can eat meat today. Chicago, Illinois: The Chicago Sun Times. 19 March 2021. Accessed May 2021 at https://chicago.suntimes.com/2021/3/19/22340442/catholic-meat-lent-friday-st-joseph

One meatless dish typical for today is “Pasta Milanese” (aka “pasta con le sarde – pasta with sardines“). Despite the name, the dish has nothing to do with Milan. The dish is bucatini pasta with sardines or anchovies, and a tomato sauce flavoured with fennel. It has fried bread crumbs on the top to represent sawdust (as Joseph was a carpenter).

Both sardines and fennel are typical ingredients of Sicily. The breadcrumbs also replace the use of cheese:

“No cheese is eaten on St. Joseph’s day, a remembrance that during the famine that spawned this devotion, cheese was not available. Pasta is not sprinkled with grated cheese, but in its place a traditional mixture of toasted dry bread crumbs with fresh sardines and fennel sauce is used.” [3]Roman Catholic Diocese of Charlotte. St Joseph’s Table. 2019. Accessed April 2021 at https://yearofstjoseph.org/devotions/st-joseph-table/

(Note that Italians wouldn’t normally ever mix cheese with fish or seafood, anyway.)

Other ingredients featured today which are also typical of Sicily include artichokes, cardoons, citrus fruits, figs, and olives. Breads made from wheat are also featured: Sicily has been an important grain-growing region since even before Roman times.

Fava beans are traditional on this day, in dishes such as fava bean soup called “Maccu di San Giuseppe”. As well, dried fava beans may be given out for luck.

“Two particularly traditional desserts found at St. Joseph’s tables are sfingi — fried pieces of bread dough rolled in sugar — and zeppole – a pastry shaped like a donut, fried or baked, and filled with a sweet pastry crème, then garnished with a dusting of powdered sugar and a maraschino cherry.” [4]Roman Catholic Diocese of Charlotte. St Joseph’s Table. 2019. Accessed April 2021 at https://yearofstjoseph.org/devotions/st-joseph-table/

On this day, zeppole are also called “St. Joseph’s fritters”. On the American east coast in cities where there are large Italian communities, bakeries do a brisk trade in zeppole leading up to St Joseph’s day. “Bignè di San Giuseppe”, similar to zeppole, are also popular today.

Food traditions and favourite dishes for today can vary a little from family to family, especially depending on which region of Italy the family is from and what has become typical in the communities they settled in in other countries. 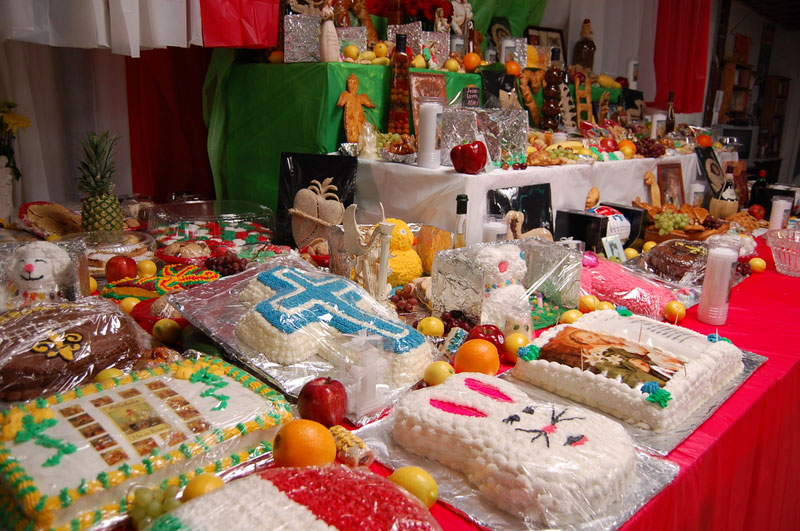 A table (often referred to as an altar) is set up in a hall or in a home with a large display of food on it to honour St Joseph. Assembling this display is a large undertaking and needs to start a few days in advance of St Joseph’s day.

Three or more tiers are typically erected on top of the table, with a statue of St Joseph on the top tier. The other tiers hold flowers, candles, other religious items, and some special decorative breads and pastries, and perhaps some fruits. Breads may appear in special shapes such as a ladder, saw, hammer, nail, etc., all relating to St Joseph having been a carpenter. The food will be food that is okay to set out on the table on display for a few days. Sometimes, given how close this is to St Patricks’ Day, items commemorating St Patrick may be on the table as well, in a nod to him.

The tradition of a table comes from a legend that the rich of Sicily once did this after St Joseph saved the island (see History below):

“After the harvest, to show their gratitude, they prepared a table with special foods to honor St Joseph and to share with the poor. After thanking and honoring the saint, they distributed the food to the less fortunate. This celebration became an annual tradition. Each year, wealthy families prepared huge buffets. The less fortunate people of the community, especially the homeless and sick, were invited, and all the remaining food and proceeds were given to the poor.” [5]Roman Catholic Diocese of Charlotte. St Joseph’s Table. 2019. Accessed April 2021 at https://yearofstjoseph.org/devotions/st-joseph-table/

Three people may be chosen to dress up as and portray Joseph, Mary and Jesus on the day of St Joseph.

In villages in Italy, the buffet tables may be set up in public squares.

On St Joseph’s day, the food on display is blessed, then the real banqueting (on other food) begins. The food on St Joseph’s table — the breads, cookies and pastries, etc. — is sold off to raise money for charitable purposes, or distributed to guests.

If the actual St Josephs’ day falls in the middle of a week, then the banqueting might be moved to a weekend.

In the Middle Ages, Sicily was reputedly suffering under severe drought. The people prayed to St Joseph, the patron saint of the island, promising to hold a big feast in his honour if he would send rain. The rains came, and the feasting started.

The fava beans reputedly did well after these rains, so they got included in foods for this day. 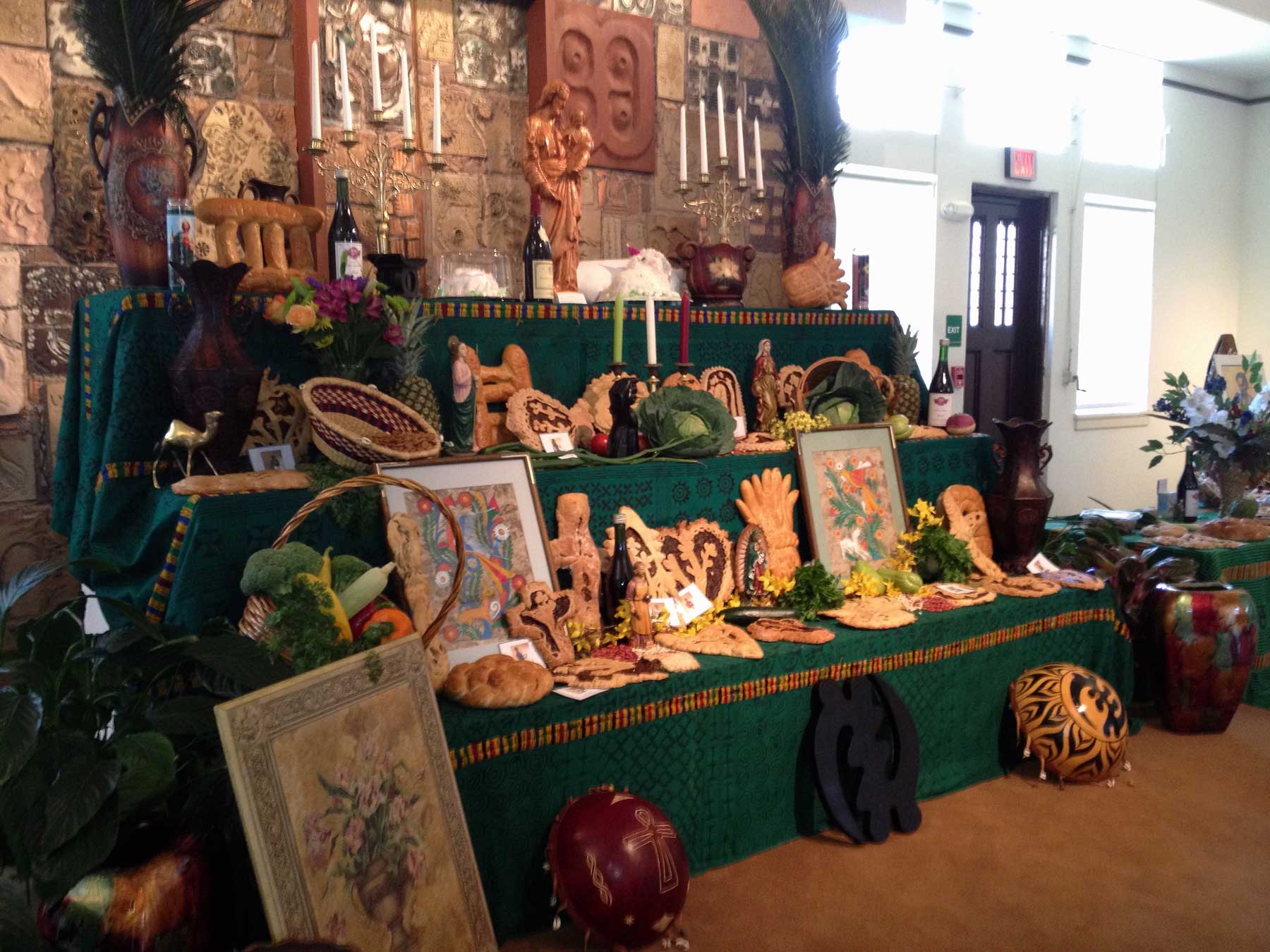