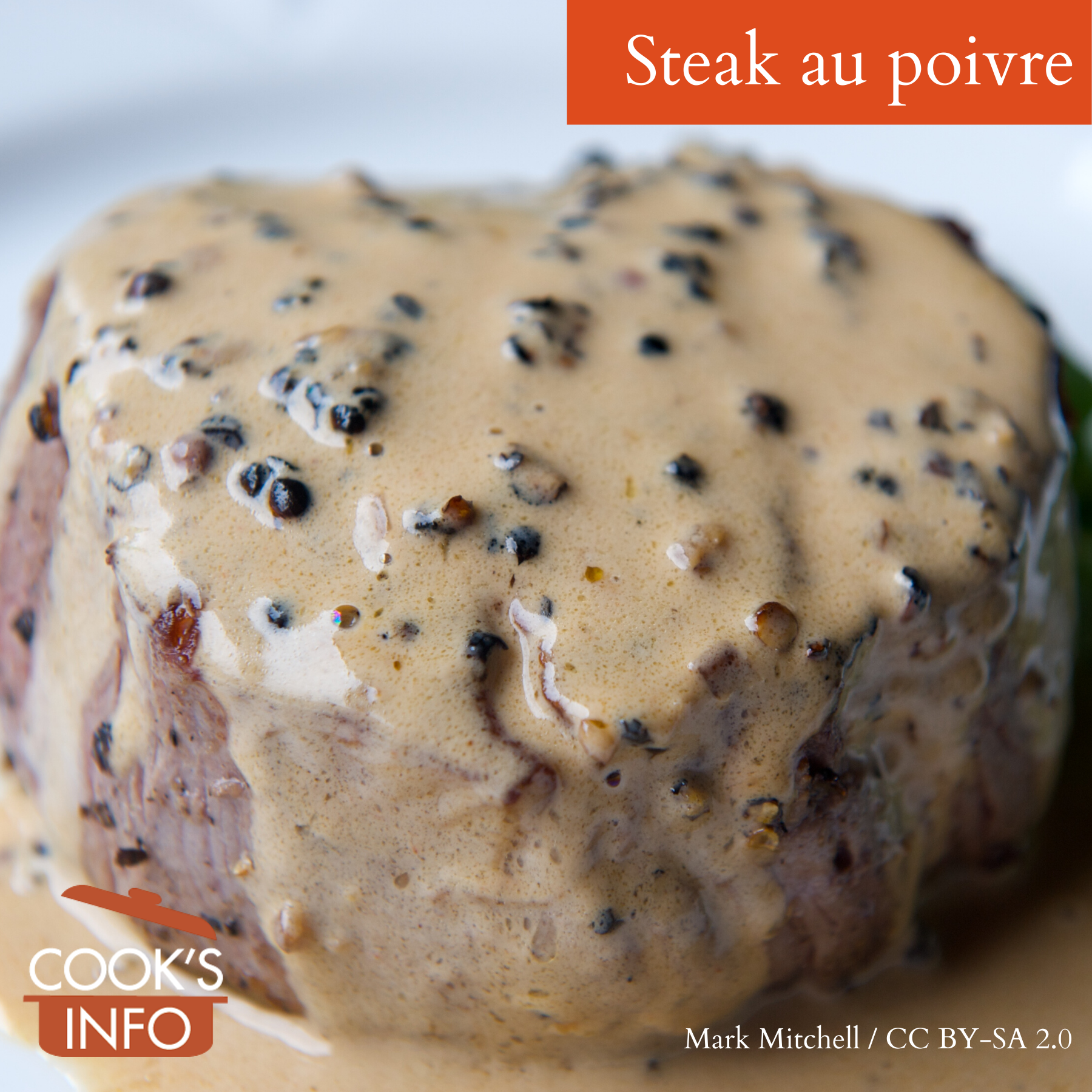 Steak au poivre is a beef steak, coated in crushed peppercorns (see Mignonette), pan-fried and accompanied by a quick sauce made in the same pan.

The pepperiness of the dish is mellowed by the sauce: in fact, the dish really is all about the pan sauce.

Typical steak cuts used include boneless ones such as filet, entrecôte, strip steak, but could also be rump or sirloin.

Classically, the peppercorns used are black ones. They are crushed so that they remain somewhat chunky, not ground. Standard ratios seem to be about one generous teaspoon of whole peppercorns per steak.

You then pan fry the steaks in oil and / or butter. You can’t use a non-stick pan, or you won’t get the “Maillard Reaction” happening that you need in the pan for the flavour of the eventual sauce. Then, when the steaks are cooked to taste, you remove them from the pan, cover them, and make a quick sauce.

The quick sauce is where general agreement breaks down. In many restaurants, the sauce became standardized as a brandy cream sauce that many people seem to have tired of. (Maxim’s restaurant in Paris in the 1920s appears to have used cream in the sauce.)

Julia Child and Jacques Pépin jointly issued a recipe for ‘steak au poivre’ in 1999 in “Julia and Jacques Cooking at Home.” For the pan sauce, they used shallots, dark stock, 2 tablespoons of bourbon, cognac or red wine, finished off with a dab of butter. They were very heavy in their use of peppercorns, and advised using mixed.

Delia Smith is far lighter on the peppercorns, using only 1 heaped teaspoon per steak, but she recommends coating the steaks with the peppercorns a few hours in advance of cooking for the taste to develop. For the pan sauce, she adds nothing but wine to the cooking pan and has you reduce it to one-third, and scorns any cream sauces: “Don’t be tempted to think that naff restaurants that serve steak au poivre swimming in a sickly cream and brandy sauce have got it right – they haven’t. This [ed: wine] version is the classic one and the best.” [1]Delia Smith. “Classic Steak au Poivre.” deliaonline.com. Retrieved January 2010 from http://www.deliaonline.com/recipes/main-ingredient/meat/steak/classic-steak-au-poivre.html

You will also see takes on this dish using chicken or pork.

Some people cheat by brushing the steak with softened butter, then pressing both sides of the steak onto a plate of cracked peppercorns, then refrigerating it to allow the butter coating to harden, sealing the cracked peppercorns to it. Sometimes the meat is just peppered on one side.

The steak is seared to a medium rare or rare.

You remove the steak, put it on a platter that has been already warmed, then cover it (it will keep on cooking for a few minutes.)

Meanwhile, a pan sauce is then usually made. The sauce may be cognac or red wine based, but cream is almost added to the sauce, to help tone down the overtly pepper taste.

To make the sauce, you add the sauce ingredients to the pan, reduce the liquid quickly, put the cooked steak on the serving plate, and then drizzle the sauce over it.

The Roman recipe collection attributed to Apicius recommended the use of pepper to mask the small of old meat.

In the Middle Ages, meat was heavily spiced, but not bad meat — only the very rich could afford any spices, and it’s relatively certain they wouldn’t be feeding themselves meat that had gone off.

Émile Lerch, in 1950 in La Revue Culinaire magazine, staked his claim to being the inventor of Steak au poivre, stating that he first made it in 1930. The Restaurant Albert was owned by Albert Blazer, who would go on to head Maxim’s later.

He said he had received a shipment of frozen beef from America that looked great, but lacked flavour. At the time, the restaurant was full of Americans who had ruined their taste buds by indulging on too many cocktails before dinner. He came up with the peppercorn idea to give the meat some taste, and to make sure the customers with their deadened taste buds could taste it period! He deliberately, he said, called it “steak au poivre” to indicate its dual origin, American beef and French cooking.

“The origins of steak “au poivre”, a steak coated with crushed peppercorns or served with a peppercorn sauce, are controversial. Chefs who claim to have created this dish include E. Lerch in 1930, when he was chef at the Restaurant Albert on the Champs-Elysees; and M. Deveau in about 1920, at Maxim’s. However, M.G. Comte certifies that steak “au poivre” was already established as a specialty of the Hotel de Paris at Monte Carlo in 1910, and O. Becker states that he prepared it in 1905 at Palliard’s!” —Larousse Gastronomique. New York: Clarkson Potter. 2001. Page 1142.

The name of the dish in French really is “Steak au poivre”, not “Bifteck au poivre.” In French it means “pepper steak.”