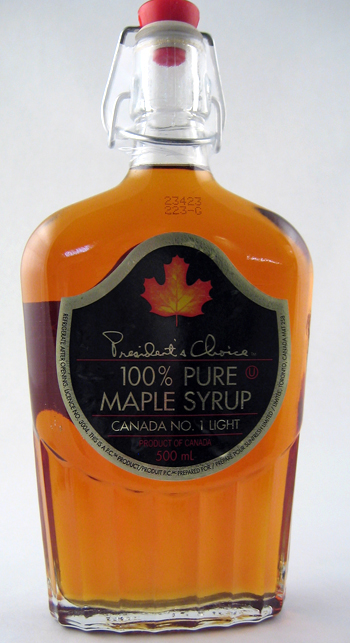 Maple Syrup comes from the sap of sugar maple trees. Sugar maples are a member of the hard maples group, which includes others such as Black Maple, but it is primarily the sugar maples which are tapped for their sap (red or silver maples can also be tapped.) One tree can produce twelve gallons of maple sap a year, which seems like a lot, until you realize that about 40 US gallons (150 litres) of sap are needed to end up with one US gallon (3 3/4 litres) of Maple Syrup.

Sap is harvested in the early spring. To get a good run of sap, you need warm sunny days, and very cold nights. Taps are hammered into the trees, and buckets hung on the taps to catch the sap running out. The taps will be in the tree from the first major thaw, up until when the leaf buds open — after that, the sap has a harsh, awful taste.

Maple Syrup is graded based on its colour and flavour. It is graded differently in the United States than in Canada, and some American states and Canadian provinces even have their own variations of grading systems. Generally, though, the highest grade (grade A) has a light colour, is made from the first sap runs, and has the sweetest flavour, making it good for table use. The middle grades have darker colours and are good for cooking or baking; the lower grades (grade C) are for commercial use. 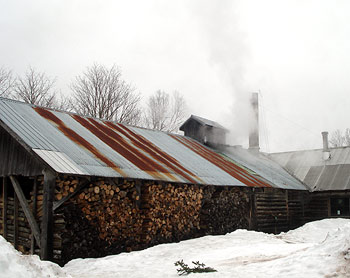 Some will say that Canadian Maple Syrup is better than American, but frankly that’s more wishful thinking than fact: Maple Syrup from New England is second to none. It is the Canadian Maple Syrup, however, which has shouldered its way onto grocery shelves in Britain next to the golden syrups and treacle. That being said, take with a large grain of salt the claims that Maple Syrup from one province or state is better than that from another: this is more home-town boosterism than it is scientific fact.

Maple Syrup in general may be overrated. North Americans are great fans of it, but more with lip service than their wallets, and probably because it’s something home-grown rather than an imitation of a European original. But it is extremely sweet, and its flavour is so pronounced that you really can’t use it in your baking as you would other syrups without its taste taking over. Many people in fact now think its flavour has been done to death, and just find cloying and annoying, but it’s hard to say that out loud without getting jumped all over.

Initiation maple syrup is often made with Fenugreek Seed.

Maple Syrup is a syrup, so you can generally use it as you would another syrup. When using it as a substitute for other syrups in baking, though, bear in mind its distinct flavour, which you may or may not want to come through. Maple Syrup burns more easily than sugar.

Refrigerate after opening; this will help prevent mould. . If the syrup crystallizes, place the tin or jar in a bowl of hot water until it liquifies again.

The recommendation used to be that if mould grew on top of your maple syrup, to simply skim the mould off and then boil your maple syrup to prevent any more mould spores from germinating.

Now, the recommendation is to discard the syrup. 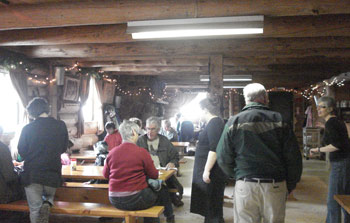 Settlers in North America had two problems getting hold of a sweetener for their tables and for cooking. Sugar was well-known by then, but it was highly taxed. Plus, some people didn’t want to buy a product created through slavery. As for that age-old sweetener, honey — it wasn’t available in North America as honey bees weren’t native there. They were introduced later.

Settlers, though, weren’t long in catching onto what the native North Americans used as their sweetener, which is Maple Syrup.

By the late 1800s, slavery had been abolished, and taxes on sugar were dramatically dropped, so sugar became cheaper than Maple Syrup, causing Maple Syrup’s production and popularity to drop. Today, Maple Syrup is the luxury item, with production only 1/5th of what it had been in 1900. People really did prefer white sugar.

The sugar maple is used as a state tree by Vermont, New York, West Virginia, Wisconsin, and Canada.

“Pour on golden syrup of the maple, a jewel-like ambrosia, pale as wheat straw, refined to diamond purity, delicate as a sunbeam. Maple syrup on waffles literally to melt in the mouth. Maple syrup’s not cheap. It never will be. So when you buy, be sure it’s as good as you can get for your money.” — Paddleford, Clementine (1898 – 1967). Food Flashes Column. Gourmet Magazine. June 1950.