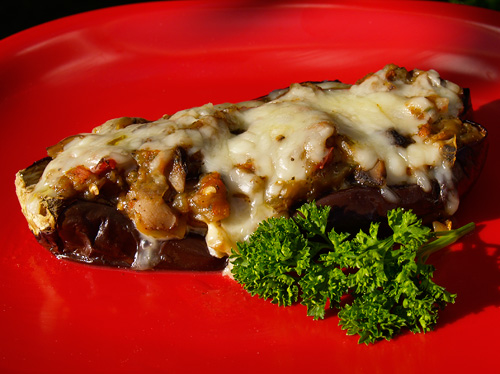 CooksInfo
These cheese-topped eggplant halves are a real treat for eggplant lovers. Cheesy, creamy, rich-tasting eggplant with none of that partially-raw flavour that eggplant can have at times. Using a pressure cooker speeds up the cooking time and helps ensure that the eggplant gets fully cooked.
Print Recipe
Prep Time 45 mins
Cook Time 45 mins
Total Time 1 hr 30 mins
Course Skinny Food, Vegetables
Servings 8 servings of 1 large half

You can easily make these a day ahead, doing everything but baking them. If you don't have a pressure cooker, try steaming the eggplant shells, and simmering the filling in some broth.
Tried this recipe?Let us know how it was!

3 Weight Watchers PointsPlus® per eggplant half. (There are 26 points in total in the recipe.)

We used a salt substitute.