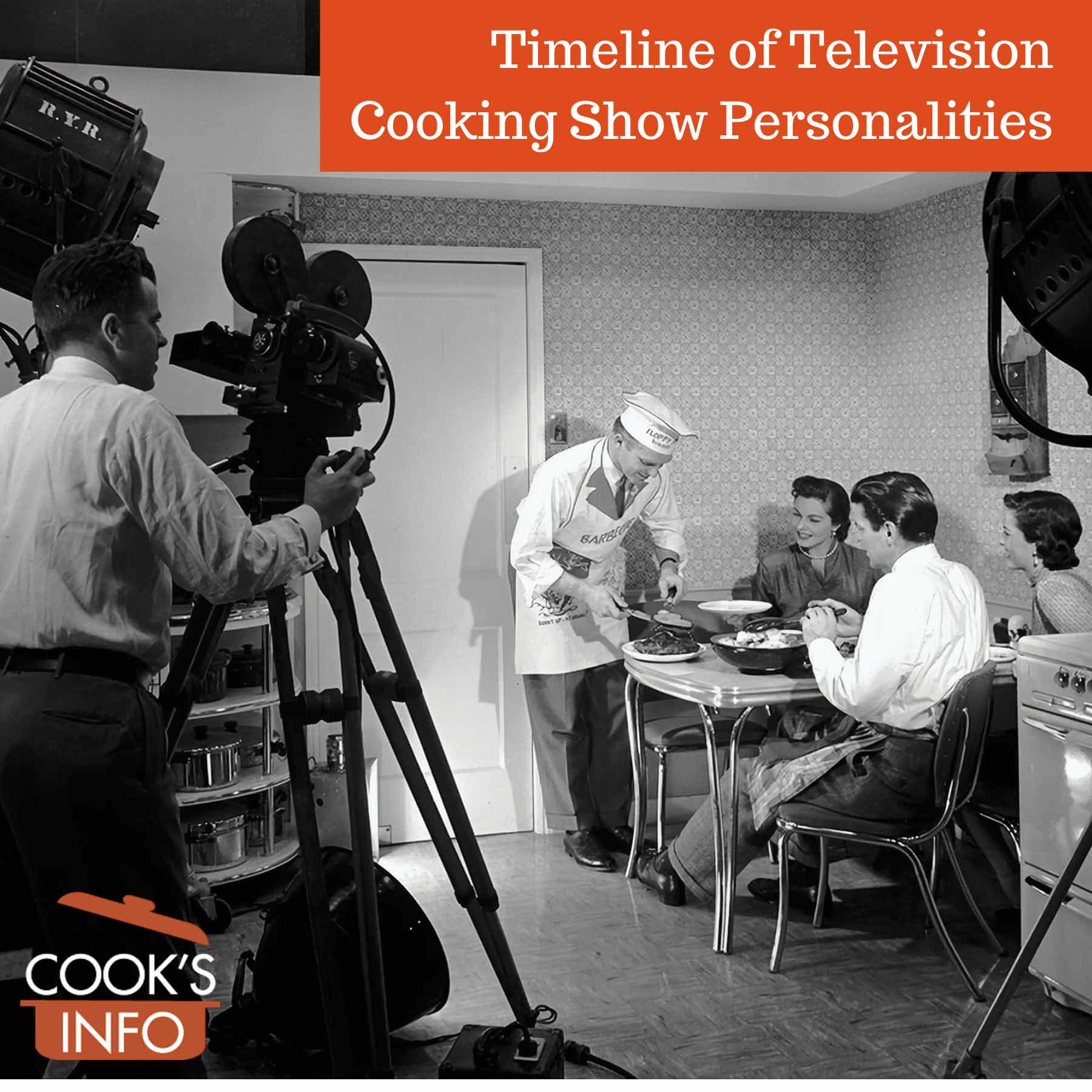 This is a timeline showing what television cooking personalities appeared when, and where. If a star made a debut in more than one country, that is counted as a separate entry for him or her.

This list is constantly being updated. For a detailed timeline of all of an individual personality’s television shows, please see their separate biographies linked to below.

Scottish food television researcher Kevin Geddes raises an interesting point about audiences for the earliest television cooking programmes. Radios were becoming affordable in that era, and so people actually doing the work in kitchens could realistically have had access to radios to hear radio shows on food and home economics. Televisions, however, were astronomically expensive. People who had access to them would not have been actual kitchen workers:

“The audiences in the first few years of television were not likely to have been the same audiences who tuned into radio talks on food, or indeed had any interest in or experience of the preparation of food, as they were affluent and in the main employed domestic servants.” [1]Geddes, Kevin. For the Housewife? From ‘The Singing Cook’ to ‘Common-Sense Cookery’: The First (Disrupted) Twenty Years of Television Cooking Programmes in Britain (1936-1955). In: Dublin Gastronomy Symposium: Food and Disruption. 2020.

For the early affluent television crowd, the interest in televised cooking shows may have been one more of general culinary cultural education, or entertainment, rather than hands-on how-to.

Possibly the first depiction of cooking by a cook on television occurred on 18 November 1936 on BBC. It was part of a magazine programme called “London Characters” showcasing a selection of “interesting people”, among them “The Singing Cook”: a woman named Rosina Dixon shown singing as she rolled out pastry. An actual cook, Dixon said that singing while cooking helped to “keep the pastry light.” She sang the lied “My Dear Soul”. The programme was broadcast live, and not recorded, but a few weeks later she repeated her appearance for film, now preserved on British Pathé. [2]Geddes, Kevin. For the Housewife? 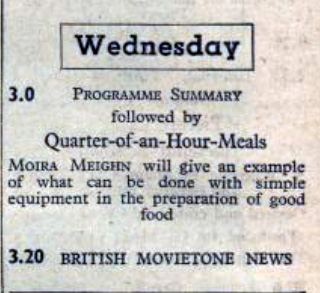 Starting on 9 January 1937, Xavier Marcel Boulestin was given air time for a cooking programme called “Cooks Night Out”, a series of five fifteen-minute episodes. Each episode covered making a dish that, when all put together, would constitute a five-course meal.

There were several other televised short cooking spots between 1937 and 1939, featuring cooks and chefs such as a Mrs Arthur Webb, a B.J. Hubert, M. Dutrey and M. Clafour. [4]Geddes, Kevin. For the Housewife?

On 1 September 1939, BBC’s nascent television broadcasting in England was shut down for the duration of the Second World War, putting an early to this early experimentation with cooking shows.

Collins, Kathleen. The Origins of the Cooking Show. Retrieved October 2013 from http://www.nytimes.com/interactive/2009/08/02/magazine/20090802_COOKING_INTERACTIVE.html

Geddes, Kevin. For the Housewife? From ‘The Singing Cook’ to ‘Common-Sense Cookery’: The First (Disrupted) Twenty Years of Television Cooking Programmes in Britain (1936-1955). In: Dublin Gastronomy Symposium: Food and Disruption. 2020.