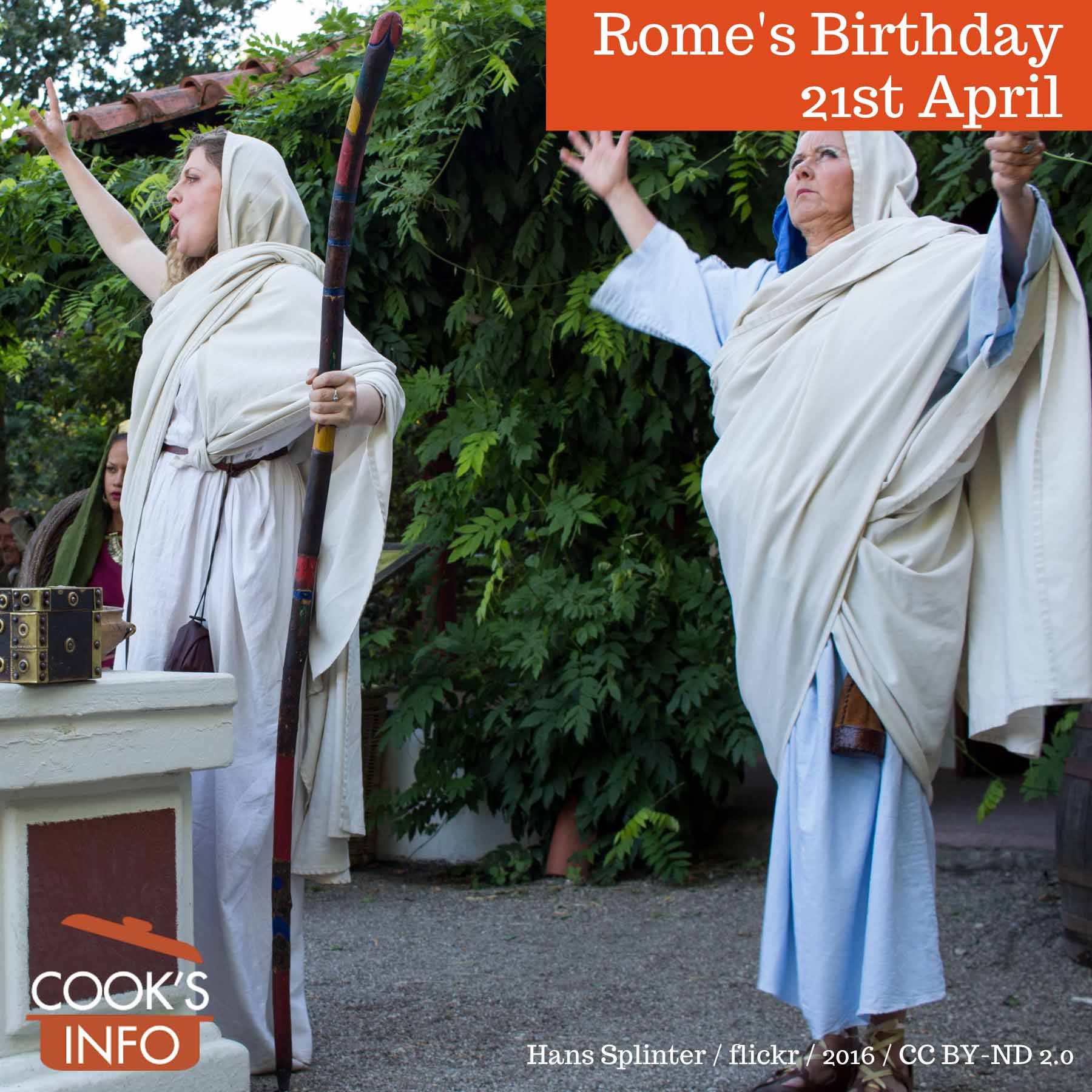 The 21st of April is the birthday of the city of Rome.

The day commemorates the founding of Rome on 21st April 753 B.C., and has been celebrated off and on for thousands of years.

In Rome, there will be processions and pageants composed of participants from re-enactment societies dressed as Roman soldiers, gladiators, senators, and formidable Roman matrons. Parades process past the Colosseum and Arch of Constantine, eventually arriving in the Circus Maximus. There, there are pageants and re-enactments of military manoeuvres, etc.

There will also be ceremonies at other sites such as the Roman Forum and the Imperial Forums.

There will be concerts, poetry readings, and free admission to some museums.

Vendors of gelato and sandwiches (panini) make sure no one goes hungry.

Online, there will be webinars, lectures and videos. 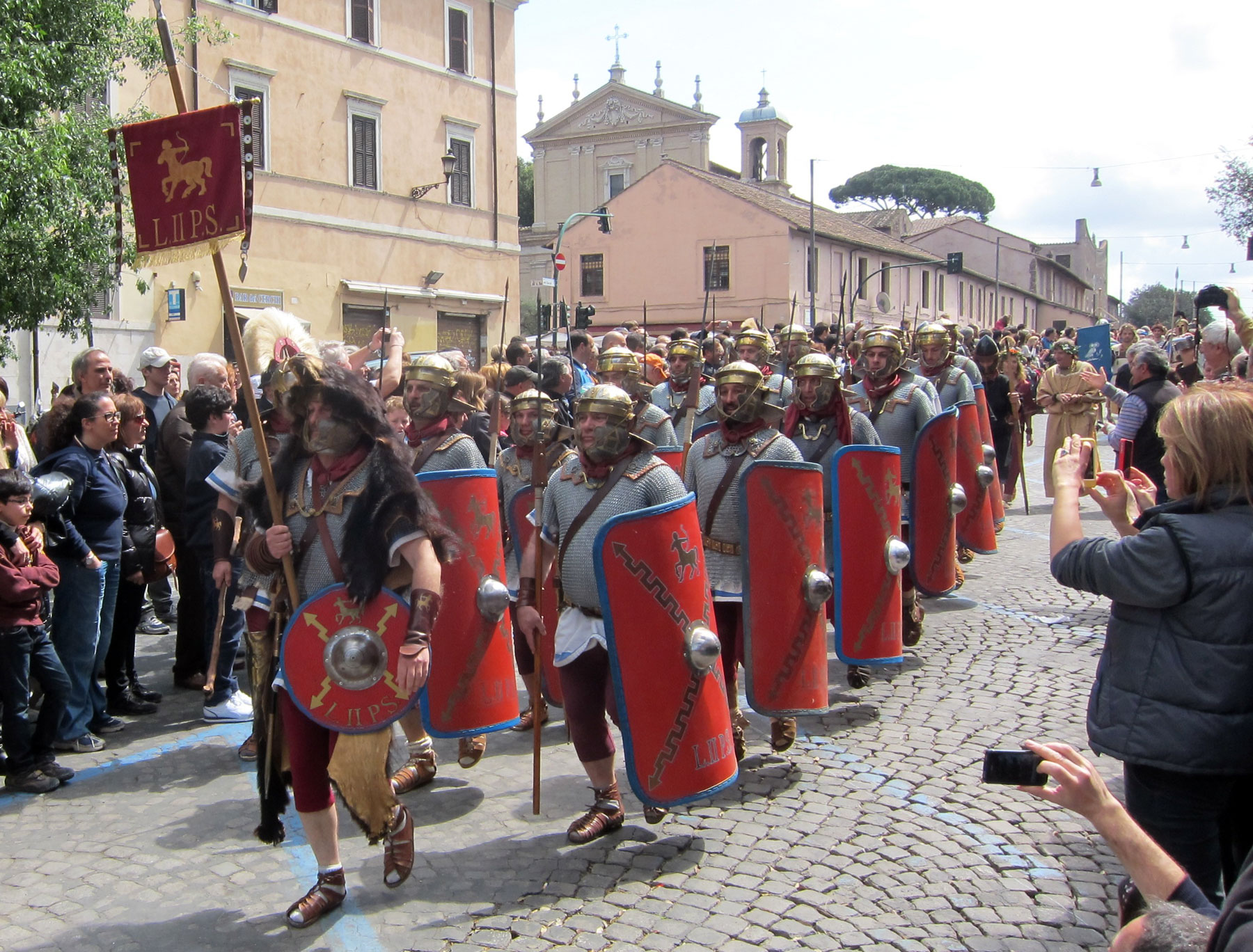 The pantheon on Rome’s birthday

Another special event occurs to mark Rome’s birthday that not many are aware of.

The pantheon was built designed expressly so that, on Rome’s birthday, at noon, the sun streaming through the oculus of the Pantheon comes in at an angle that centres exactly on the doorway of the entrance to the Pantheon, which is on the north of the building. [1]There has been some debate as to whether the entrance was originally on the south side, and then moved to the north side during reconstruction by Hadrian c. 120ish AD. See: Simpson, Christopher J. “The Northern Orientation of Agrippa’s Pantheon: Additional Considerations.” L’Antiquité Classique, vol. 66, 1997, pp. 169–176. JSTOR, www.jstor.org/stable/41659304. Accessed 9 Apr. 2021.

The phenomenon still occurs to this day.

Historians speculate that Emperors would likely try to make an appearance in that doorway at that time:

“If we suppose, as seems likely, that the emperor was celebrating this precise day there, then his entrance “together with the sun” would have been a symbolic link between the people and the Gods… ” [2]Hannah, Robert and Giulio Magli. The role of the sun in the Pantheon’s design and meaning. Dunedin, New Zealand: Department of Classics, University of Otago. 2009. Page 11.

On 21 April 753 BC, Romulus and his twin brother, Remus, founded the city of Rome.

At least, that’s the story according to legend.

We don’t actually know if a historical Romulus and Remus actually existed. But the Romans (at least, officially) believed they did, and accepted the myth about them as a historical fact that was intertwined with their whole political, religious and cultural identity.

As for the 21st of April, that was the day of the “Parilia“: the festival of Pales, who was the Roman goddess of shepherds. Romulus and Remus were raised by a shepherd, so blending a rural celebration in with the day on which the brothers theoretically founded the city would have reminded Romans of their rural origins, of which they were proud.

By 121 AD, under Hadrian, the Parilia holiday was renamed to “Romaia” to celebrate the “Natalis Urbis Romae” — birthday of the city. By this point in time, Rome’s rural origins were in the ancient past, and its identity as a city was far more important.

The celebrations that took place on Rome’s birthday were noted as being “joyful” and “crowded”:

“In the Deipnosophistae, Athenaeus remarks on the joyful and crowded celebrations of the Parilia, called “Romaia” after it was made a festival of the Fortuna of the City of Rome when the “wisest ruler,” Hadrian, consecrated the Temple to the City. Athenaeus repeats twice in the passage that all who lived or happened to be in Rome took part in the festivities every year. The traditional date of the Parilia was 21 April, and from a series of Hadrianic coins we know the year of the festival’s transformation.” [3]Boatwright, M.T. Hadrian and the City of Rome. Princeton, NJ: Princeton University Press. 1987. Page 121.

In that year, on the 21st of April, Hadrian also dedicated the building site at the edge of the Roman Forum for a new temple to Venus and Rome:

“Hadrian dedicated the temple on 21 April, the date of the Parilia festival, on which (according to Roman tradition) in 753 BCE Romulus had founded the city of Rome. Having dedicated the temple, Hadrian renamed the festival the Romaia. In so doing, he revitalised the festival which celebrated Rome’s origins and the common identity of the Roman people.” [4]The Temple of Venus and Rome. In: Hadrian’s Rome, Step 2.2. Open University. Accessed April 2021 at https://www.open.edu/openlearn/history-the-arts/hadrians-rome/content-section-2.2 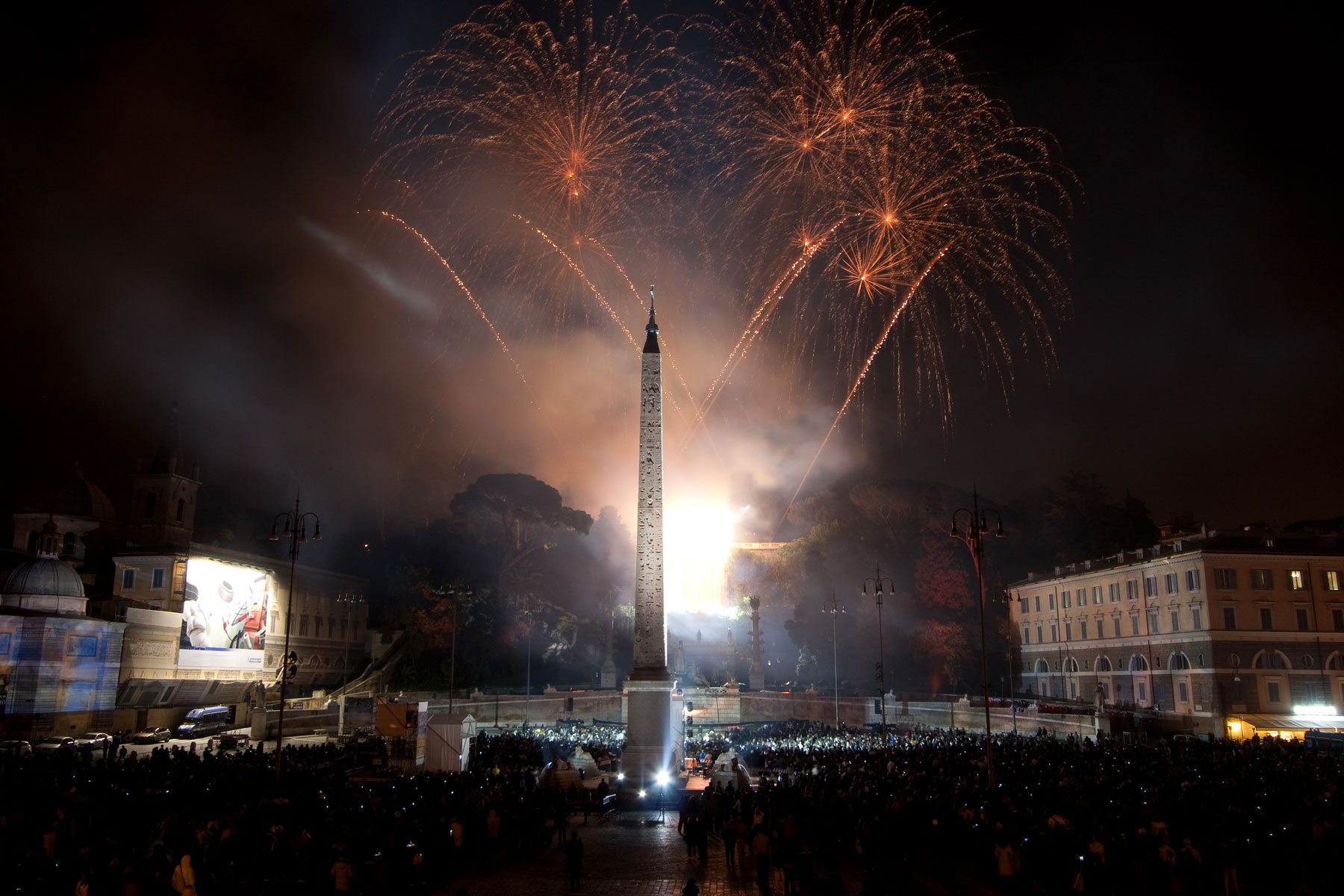 The actual year part of the city’s reputed birth date came about separately.

The year 753 was first calculated by Titus Pomponius Atticus (c. 110–32 BC) and then accepted by scholar Marcus Terentius Varro (116–27 BC) in his writings. After that, others cited it as well.

The way the 753 BC year was calculated was that it was “based on the tradition that the first pair of consuls took office in 508 BCE and that the seven legendary kings of early Rome had ruled [previously] for 35 years each.” [5]Sauer, Nikoline. The Memory of Early Rome. Aarhus University, School of Culture and Society. 6 May 2020. Accessed April 2021 at https://cas.au.dk/en/cfp/news-events/show/artikel/the-memory-of-early-rome/

The math on that is:

In actuality, there’s evidence that the hills of Rome have been settled since at least 1000 BC. [6]Swift, Laura. Archaeology adds another twist to Rome’s foundation story by ageing it 100 years. The Conversation. 17 April 2014. Accessed April 2021 at https://theconversation.com/archaeology-adds-another-twist-to-romes-foundation-story-by-ageing-it-100-years-25727

The story of very early Rome is one of evolution and amalgamation of several small villages rather than a deliberate founding, but that’s rather a fuzzy concept to plan a party around: a fixed point in time provided something more concrete to commemorate. And there would probably a whole separate discussion around what one wanted to define as “founding”, anyway.

At any rate, even though the whole date — day, month and even year part — is probably made up, and the city never really had an actual founding, it’s indisputable that there’s now literally thousands of years of history associated with the “event” and the date. So perhaps the date is best regarded as a convenient convention, like that of Christmas.

The date was occasionally celebrated during the Renaissance.

The modern revival of the celebration began in 1870, upon the reunification of Italy. [7]Veitch, Jeffrey D. Celebrating Rome’s Birthday. Lucius’ Romans Blog. University of Kent. 21 April 2016. Accessed April 2021 at https://blogs.kent.ac.uk/lucius-romans/2016/04/21/celebrating-romes-birthday/

Hannah, Robert and Giulio Magli. The role of the sun in the Pantheon’s design and meaning. Dunedin, New Zealand: Department of Classics, University of Otago. 2009.  (link valid as of April 2021)

Rome: A Virtual Tour of the Ancient City (Free online micro course. University of Reading) (link valid as of April 2021)

Ab urbe condita means years since the founding of the city (though identifying years by saying which consuls held office that year was a more common practice by Roman writers.)

Bond, Sarah. The History of the Birthday And The Roman Calendar. Forbes Magazine. 1 October 2016. Accessed March 2021 at https://www.forbes.com/sites/drsarahbond/2016/10/01/the-history-of-the-birthday-and-the-roman-calendar/?sh=1fd1d12d7bdc

Sauer, Nikoline. The Memory of Early Rome. Aarhus University, School of Culture and Society. 6 May 2020. Accessed April 2021 at https://cas.au.dk/en/cfp/news-events/show/artikel/the-memory-of-early-rome/