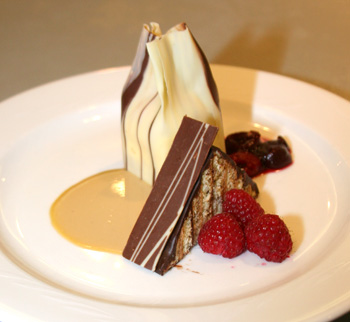 Desserts are sweet foods served at the end of a meal.
Contents hide

Dessert is essentially a French concept. It was the French who, in the 1600s, divided sweet parts of the meal from the sour and savoury parts. Until then, European cooking had followed the Roman tradition of making no such distinction. (See the entry on “French Food” for a full discussion.”) Chinese cooking and some Middle Eastern cooking still do not. Thus, we have the famous “sweet and sour” dishes in Chinese cuisine. Chinese meals don’t “natively” have the concept of a sweet course at the end of meals, thus, the invention of fortune cookies in North American Chinese restaurants.

The term “dessert” is used in America, Australia, Canada, Ireland and France. In England, some consider the word “dessert” to be vulgar, and call it “afters”, the “sweet” or “pudding” instead. The upper-class preference is for “pudding.” But they will still call a dessert spoon a dessert spoon. In the food business in England, though, dessert has definitely become the term used by food marketers, etc.

Desserts can be served room-temperature, warm, hot, chilled or frozen. They are usually a sweet food, but the dessert course can include a savoury item such as cheese, or nuts. In America, traditional desserts are jellies, puddings, pies, cakes and ice cream. If cheese is served, it would be as a wedge of cheddar to the side of a piece of apple pie.

Desserts are usually eaten either out of hand, with a fork, or with a spoon. There are very few drinkable desserts.

Dessert in North America and Britain is traditionally accompanied by a cup of coffee or tea. In Italy or France, coffee is rarely served after a meal with dessert.

To people in the English-speaking world, older desserts such as pies are seen as comfort foods, especially if homemade.

“Apple Pie” is seen as the classic American dessert, to the extent that just a picture of it is enough to represent American values. It is, though, of course, a dish that was imported from England. In 1975, the car maker General Motors promoted its Chevrolet brand with the jingo: “baseball, hot dogs, apple pie and Chevrolet.”

Japanese desserts are often based on rice (“mochi”) and pastes (“anko”) made from beans. 80% of all Adzuki Beans grown in Japan are used for sweets.

Most custards made are dessert ones. There are also savoury custards, though, such as quiche.

Most people think complicated when they think about making a dessert. A simple but good dessert can be fresh fruit, with good pouring or spooning cream on it.

A dessert spoon is half-way in size between a teaspoon and a tablespoon.

Desserts in the food trade

Supermarket-bought desserts have edged up in price, but rather than tasting better because of the higher price tags, have come to taste more “chemically” and artificial [1], and so many people just give them a miss. Why pay more and more for something that is tasting worse and worse? Proper bakery-bought ones are hard to procure, with supermarket bakeries having driven most of the real bakeries out of business. And with stay at home mum’s now a rarity, there’s no one at home who has time to make desserts.

Indeed, in supermarket in-store bakeries, the portion of their sales going to dessert items (as of 2009 to 2010) appears to be declining, though sales of other bakery items such as breads, etc, increases. [2]

The average supermarket bakery in America sells about $2,700 worth of cakes (including mousse cakes, cheesecake, etc) a week. [3]

In the UK, in grocery sales, the desserts market was worth £1.5 billion in 2008. 70% of the desserts sold in 2009 market was chilled products — items sold from a chiller refrigeration unit. Frozen items, though, started to increase in popularity because many of these bake-at-home items were cheaper. Items not sold from a chiller, such as bags of cookies, etc, also started to become more popular, as they are also cheaper, not requiring constant refrigeration. Frozen cheesecakes are a top supermarket seller in America. [4]

Desserts are a boost for restaurant profits, and can be one of the highest profit margin items on the menu.

Desserts that contain fruits are popular on restaurant menus at the start of the 2000s, though chocolate remained the number 1 ingredient that people looked for. In some British restaurants, the dessert trolley cart is still wheeled around. This helps increase sales — people’s eyes may do the sale for you that words on a menu failed to do. Some American restaurants are trying out the concept of a dessert trolley once again.

Dessert bars started to become popular around the start of the 2000s in big American cities such as Boston, Chicago and New York. They are open late at night for after theatre or after cinema crowds, and even offer wine suggestions to go with your dessert.

There are many low-fat, low-sugar, low-calorie desserts commercially available now.

Fat has an important role in desserts, creating texture and moisture, and carrying flavour. The fats are usually hard fats, such as lard, butter or shortening. It’s a fair bit of trial and error to replace them in recipes. Some say even if you do, the desserts don’t taste good enough to be worth the bother: they’d just rather have an occasional small amount of a really good dessert. Still, the sugar-free ones are good for diabetics.

At the end of the 1300s, a French writer we now refer to as “Le Ménagier” made what is perhaps the first reference to a dessert course at the end of a meal:

Desserts really came into their own, in terms of being accessible to everyone, with the appearance of affordable refined white sugar.

In the 1800s and 1900s, the dessert was often considered the highlight of the meal. Sweet items to snack on during the day were not as common then as they were to become later. At potlucks, many women would make sure they got assigned the desserts, because the desserts were sure to be the things that people noticed and talked about. Dessert at the end of dinner came to also be seen as a sign of prosperity, and a properly managed household.

With the overwhelming surfeit of cheap sweet desserty-type items that arrived at supermarkets in the last few decades of the 1900s, having something sweet at the end of a meal became less special. Some families began just skipping dessert altogether, for dietary and “health” reasons. Governmental and other health bodies discourage daily desserts now, unless it’s fruit, in order to promote healthier lifestyles

Dessert remains solidly traditional at some holiday meals, such as Thanksgiving and Christmas.

The word “dessert” comes from the French verb “desservir”, meaning “to clear the table.” It’s what was served after the table was cleared of the items that were on it for the savoury portion of the meal. Many hosts and hostesses still insist that the salt and pepper, and any tracklements, should be removed from the table before dessert appears.

Dessert” in French is “dessert”; “desserte” (with an “e” at the end) is a side serving table or cart.)

Furore, Kathleen. The dish on desserts: What are you doing to boost dessert sales? Illinois: Maiden Name Press. 2008