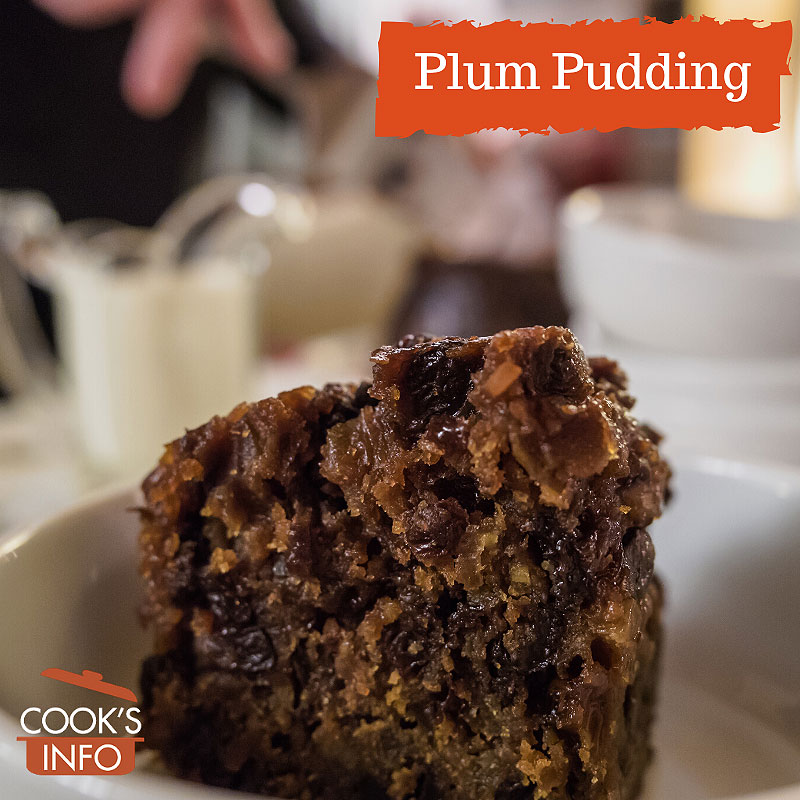 Plum pudding is a sweet dish served for dessert.

There are at least three versions of it, two of which do not actually even contain any plums. All versions are, however, steamed puddings.

The first version of plum pudding is a pudding that actually contains plums. The plums are encased in a crust in the pudding dish and then steamed. It is made at any time of the year and is not particularly a holiday dish.

Plum duff is a plainer, every-day version of plum pudding with less fruit, less spicing, and, no plums — instead, a few raisins.

The Christmas version of plum pudding

This second version of plum pudding is the best known because it is associated with Christmas and called Christmas Pudding.

It does not contain any plums: not even prunes, which are dried plums.

There are many variations of this Christmas version.

Some people insist suet must be involved. Some say they find suet makes the pudding greasy. Many report that using vegetarian suet makes no difference in taste or performance.

A 1963 James Beard version calls for eggs. [2]Beard, James. Superb English Plum Pudding. House and Garden Magazine. December 1963. Accessed January 2020 at https://www.epicurious.com/recipes/food/views/superb-english-plum-pudding-20010 Some will contain a grated carrot, perhaps as a sweetener or perhaps, as food encylopaedist Ralph Hancock surmises, a token nod to the root vegetables which were in the pudding originally in the 1400s. [3]”The root vegetables also disappeared, although even now Christmas pudding often still includes a token carrot.” — Davidson, Alan. The Penguin Companion to Food. London: The Penguin Group, 2002. Page 222.

Other variations include alcohol, or are alcohol free; modern versions are even designed to meet special-needs diets such as low-cholesterol, gluten-free, etc.

Plum pudding is usually made in advance, left to mature like a fruit cake, and then resteamed for about two hours before serving. A microwave will do this reheating in a matter of minutes, though some people feel that you’re depriving the pudding of those two additional hours of steaming in a pot in which the flavour marries and develops further. The issue with that, though, can be finding an extra burner to do that while preparing the rest of the meal.

Some like to age their plum pudding for a year, some say only age it for a few months. (The sugar and the alcohol act as a preservative.) The minimum seems to be 14 days. Many people poke holes in it during the maturing process, and drizzle very small amounts of additional booze in the holes from time to time. Don’t booze it too much, though, or it may be so moist that it won’t stay together when you turn it out onto a plate for serving, and if you plan to light it, you may end up with more of a fricassée than a flambé.

Another type of steamed pudding such as carrot pudding, etc. Or Christmas cake, or mincemeat pies.

Plum pudding has a long history. At one point, the version served at Christmas even had actually plums in it.

Its earliest known ancestor comes from the 1400s. It contained meat and root vegetables in what was essentially a frumenty mixture that was boiled in animal stomach lining. At first, it was meant to be a meal on its own, in the lead-up to the fasting at Christmas, when the Church made people fast instead of feast at Christmas. Later, it was served at the start of the Christmas meal. Dried fruit such as raisins and dried plums (aka prunes) were introduced in the 1500s as they became accessible and more affordable to people. Remember, Medieval cooking was a lot like Middle Eastern cooking today, in that it mixed sweet and savoury, fruits and meats, in the same dishes. The meat was phased out over time, as it was in mincemeat pies.

In the 1600s, there was confusion over the word “plum” itself. The Oxford Dictionary notes that in 1660, plum was used to mean “a dried grape or raisin such as used for puddings, cakes, etc.”. With this definition of plum, something with raisins in it instead of actual plums (Prunus domestica) would still qualify as a plum pudding. The Penguin Companion to Food says, “When new kinds of dried fruit became available in Britain, first raisins, then prunes in the 16th century, they were added. The name ‘plum’ refers to a prune, but it soon came to mean any dried fruit.” [4]Davidson, Alan. Page 222.

In 1662, Samuel Pepys records in his diary that he ate plum porridge on Christmas Day.

Alcohol was introduced, but one remnant of its meat origins — suet — remained.

By the Victorian era, the Christmas plum pudding had become such a cherished tradition that it appears to have stopped evolving. Indeed, the 1814 recipe given by Antoine Beauvilliers (in Literature and Lore) below is identical to many versions still in use now, with minor variations today depending on any given recipe writer wanting to put their own mark on it.

In 1814, the French writer Antoine Beauvilliers gave this recipe for plum pudding as a pudding wrapped in cloth and boiled. It contained suet, raisins, currants, fresh bread crumbs, Malaga wine, cognac, lemon zest, diced candied citron peel, flour, salt, eggs, and milk. He noted that instead of putting it in a cloth and boiling it, it could instead be cooked in a buttered casserole.

Already towards the end of the 1800s, it had become fashionable for some to joke about plum pudding, and for others to outright disparage it:

“Few people of middle age view with equanimity the festivities the present season brings with it. This often makes them unjust to those who, at the extremes of life, are able to enjoy the good things, if only indulged in moderation. Middle-aged prejudice is unusually severe against plum-pudding; yet this article is a highly-efficient food, yielding a force equivalent to two hundred and fifty foot tons — at least, so says a high authority. It is also an admirable vehicle for the administration of fat, an article of diet, as a rule, usually objected to by children. Plum-pudding, in reasonable quantity, is certainly to be preferred to the so-called ‘wholesome’ cakes, which have little fatty matter in their composition. A good wedge of cold plum-pudding is not an unwholesome lunch for young and growing lads to put in their pockets when out for a day’s skating or hunting.

Elderly people, too, are often able to compete with the younger members of the family in the enjoyment of Christmas cheer in a manner that amazes and discourages their middle-aged relations. The fact is, as has been happily pointed out by Professor Michael Foster, the digestive elements are long preserved, so that a man who in the prime of manhood was a martyr to dyspepsia, by reason of the sensitiveness of his gastric nerves, in his later years, when his nerves are blunted, and when, therefore, his peptic cells are able to pursue their chemical work undisturbed by nervous worries, eats and drinks with the courage and success of a boy.” — London Echoes. London, England: The South London Press. Saturday, 23 December 1882. Page 12, col. 6.

In 1660, plum was used to mean “a dried grape or raisin such as used for puddings, cakes, etc.” (Oxford dictionary).

Some sources maintain that plum pudding gets its name from “the process of plumming”, when the dried fruit swells up in the hot liquid during the course of making the pudding. They are probably thinking of “plumping” the dried fruit.